Menkent has the stellar classification K0 III, indicating an evolved giant star appearing orange in colour. As it evolved away from the main sequence, the star has expanded to a size of 10.6 solar radii. The radius is derived from the limb-darkened diameter of 5.46 ± 0.06 milliarcseconds, measured interferometrically in the early 2000s.

The exact mass of Menkent is uncertain. A 2012 study gave a value of 1.27 solar masses, with a note that the star may exceed this number by more than 10%. Other sources give the higher value of 4 solar masses, which would also seal the star’s ultimate fate as a white dwarf, not a supernova.

Menkent is one of the 58 bright stars with a special status in the field of celestial navigation. It is one of three navigational stars in Centaurus. The other two are Alpha and Beta Centauri. The three stars belong to a group of 18 southern navigational stars with a declination between 30° S and 90° S. Other stars in this group include Suhail in the constellation Vela, Ankaa in Phoenix, Peacock in Pavo, Fomalhaut in Piscis Austrinus, Canopus, Miaplacidus and Avior in Carina, Kaus Australis in Sagittarius, Atria in Triangulum Australe, Alnair in Grus, Shaula in Scorpius, Achernar and Acamar in Eridanus, and Acrux and Gacrux in Crux.

Menkent is a high proper motion star. It is moving across our line of sight at 65 km/s, which is twice the normal value. This suggests that the star belongs to the outer portions of the Milky Way disk and is only passing through our neighbourhood.

On average, Menkent is the 53rd brightest star in the sky. It is only slightly fainter than Hamal in the constellation Aries, Diphda in Cetus and Nunki in Sagittarius. It is about as bright as Alpheratz and Mirach in Andromeda, and it just outshines Saiph in Orion and Kochab in Ursa Minor.

The name Menkent (pronunciation: /ˈmɛŋkɛnt/) comes from the Arabic mankib, meaning “shoulder.” It refers to the star’s position in the constellation.

Menkent lies in the southern sky but unlike its brighter neighbours Alpha and Beta Centauri, it is visible to some observers in mid-northern latitudes. It can be seen, if only briefly appearing above the southern horizon, from locations south of the latitude 53° N. 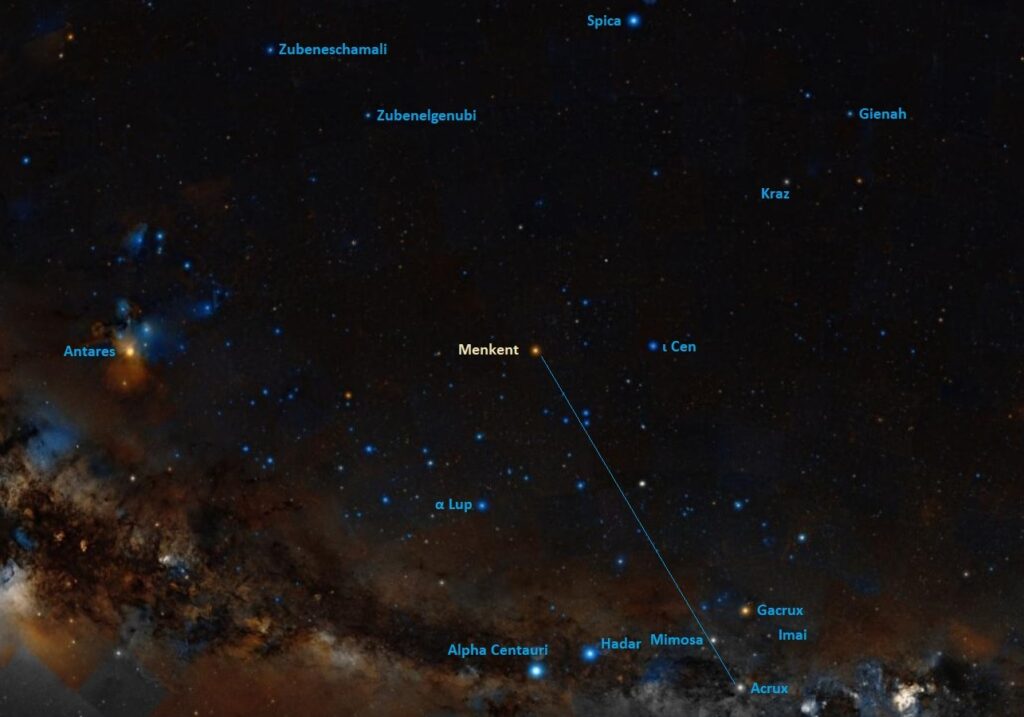 Menkent can be used to find several galaxies that lie in the vicinity of the star. These include the elliptical galaxy NGC 5419 and the spirals NGC 5397 and IC 4352, which lie north-northwest of Menkent.

Menkent is located in the constellation Centaurus. Representing a centaur in Greek mythology, Centaurus is one of the 48 Greek constellations, first listed by the Greek astronomer Ptolemy of Alexandria in his Almagest in the 2nd century CE. It is the fifth largest southern constellation and ninth largest of all 88 constellations, stretching across an area of 1,060 square degrees. Centaurus is best known for its bright stars Rigil Kentaurus (Alpha Centauri) and Hadar (Beta Centauri), the third and 11th brightest stars in the sky. The Alpha Centauri system is also our closest neighbour, lying only 4.37 light years away. It contains Proxima Centauri, Alpha Centauri C, the nearest star to the Sun, located at a distance of only 4.244 light years. Centaurus is also home to V766 Centauri (HR 5171), one of the largest stars known, with a radius more than 1,000 times that of the Sun.

The best known deep sky objects in the constellation include Omega Centauri, the Milky Way’s largest, brightest and most massive globular cluster, Centaurus A, one of the brightest galaxies in the sky, with an apparent magnitude of 6.84, the Centaurus Cluster of galaxies with the brightest member NGC 4696, a magnitude 11.4 elliptical galaxy, the spiral galaxies NGC 4945 and NGC 4622, the polar-ring galaxy NGC 4650A, the irregular galaxy NGC 5253, the open clusters NGC 3766 and NGC 5460, the protoplanetary nebula ESO 172-7, also known as the Boomerang Nebula, and the Blue Planetary nebula (NGC 3918), the brightest planetary nebula in the far southern sky, with an apparent magnitude of 8.5.

The best time of year to watch the stars and deep sky objects in Centaurus is during the month of May, when the constellation is prominent in the evening sky. The entire constellation is visible from locations between the latitudes 25° N and 90° S.