Toliman has the stellar classification K1V, indicating a main sequence star appearing orange in colour. The star is slightly smaller and less massive than the Sun, with a radius of 0.8632 solar radii and a mass of 0.907 solar masses. With a surface temperature of 5,260 K, it shines with half of the Sun’s luminosity. The star’s estimated age is about 5.3 billion years.

Toliman is a slow spinner, with a projected rotational velocity of only 1.1 km/s. It takes 36 days to complete a rotation.

Even though its total luminosity is lesser than that of Rigil Kentaurus, Toliman is the brightest source of X-ray emissions in the Alpha Centauri system. In 2005, a flare was detected on the star. 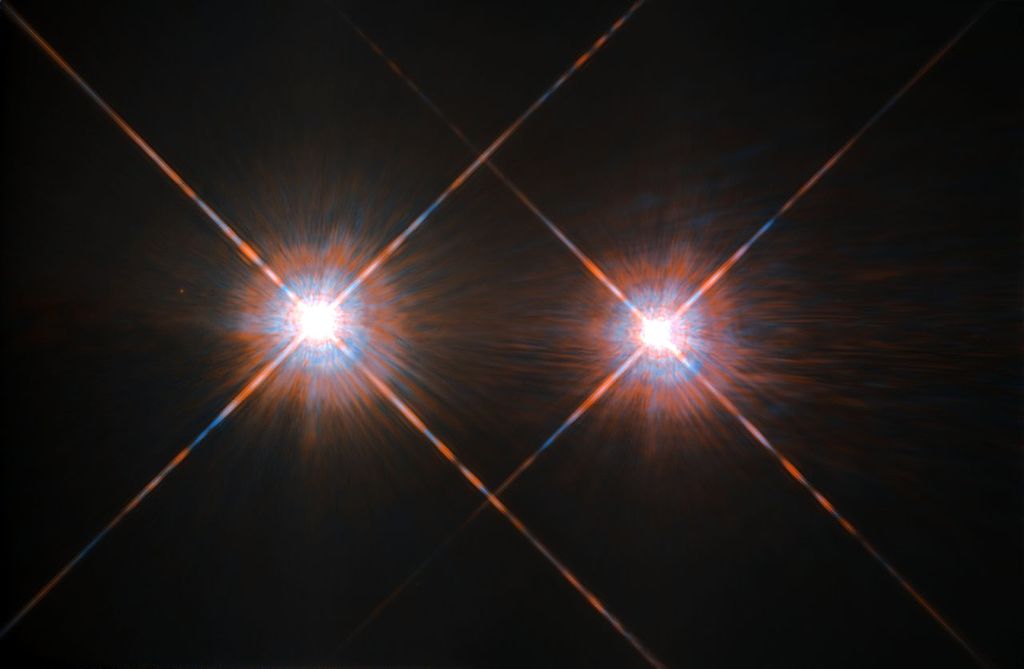 This NASA/ESA Hubble Space Telescope has given us this stunning view of the bright Alpha Centauri A (on the left) and Alpha Centauri B (on the right), shining like huge cosmic headlamps in the dark. The image was captured by the Wide-Field and Planetary Camera 2 (WFPC2). WFPC2 was Hubble’s most used instrument for the first 13 years of the space telescope’s life, being replaced in 2009 by Wide-Field Camera 3 (WFC3) during Servicing Mission 4. This portrait of Alpha Centauri was produced by observations carried out at optical and near-infrared wavelengths. Image: ESA/NASA (CC BY 2.0)

Alpha Centauri AB appears as a single star to the unaided eye but can easily be resolved in small telescopes. The two stars orbit around a common centre of mass with a period of 79.91 years and an eccentricity of 0.5179. As they orbit, they come within 11.2 astronomical units (Earth-Sun distances) of each other and get as far apart as 35.6 astronomical units. Their apparent separation has been observed to vary from 1.7 to about 22 arcseconds. In 2019, the angular separation between them was 4.92 arcseconds and it increased to 5.49 arcseconds in 2020. 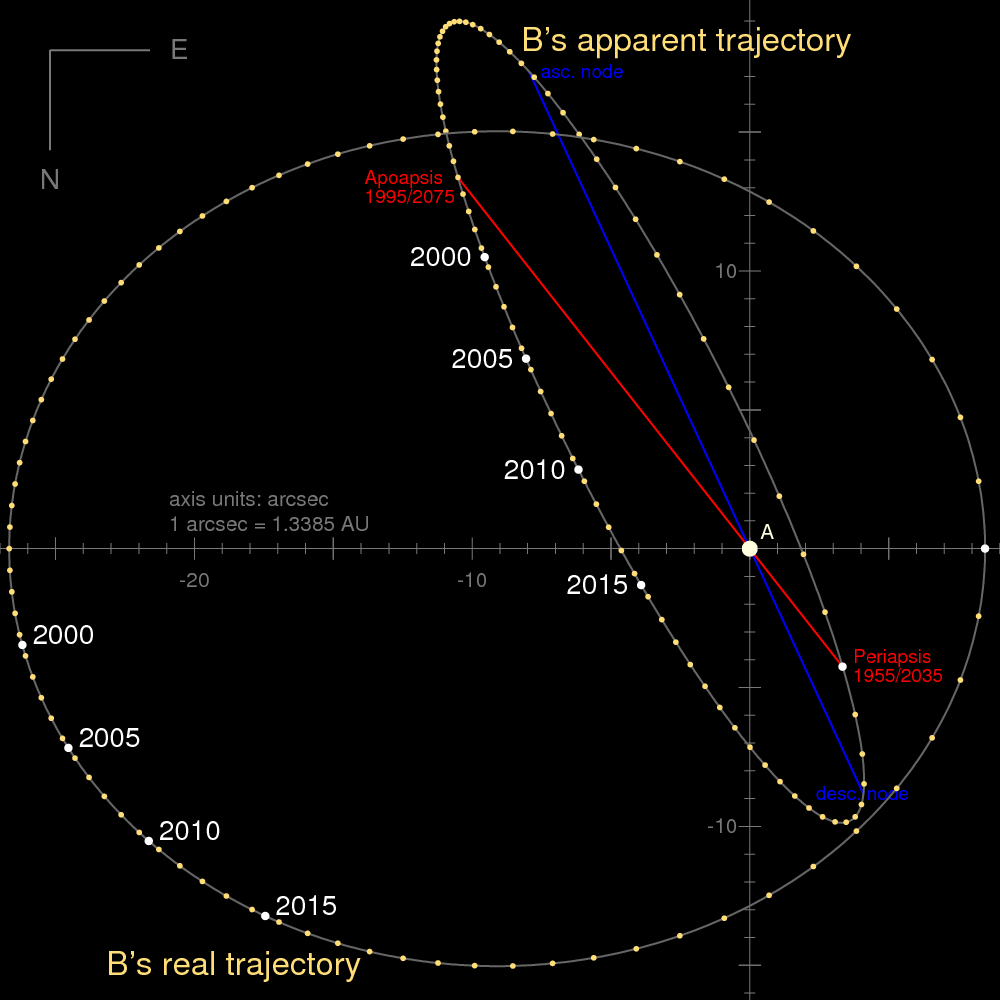 Trajectory of Alpha Centauri B relative to A (fixed to the coordinate origin) as seen from the Earth (inclined ellipse) and face-on (horizontal ellipse). The orbit parameters are taken from Pourbaix et al. (2002). The graph has been created with gnuplot based on data generated by solving Kepler’s equation.
Note 1: The time stamps refer to the motion as seen from Earth, i.e. delayed with respect to the true motion by the travel of light by about 4.4 years. North is down, as usual in many astronomical charts. Note 2: For simplicity, the points refer to steps of 1/80 of an orbit rather than to exact 1-year steps (which would be 1/79.91 of an orbit). Note 3: The ascending node is the point where B (with respect to A) penetrates the celestial plane and becomes more distant to Earth than A. Image: Wikimedia Commons/SiriusB (CC BY-SA 3.0) This wide-field view of the sky around the bright star Alpha Centauri was created from photographic images forming part of the Digitized Sky Survey 2. The star appears so big just because of the scattering of light by the telescope’s optics as well as in the photographic emulsion. Image: ESO/DSS 2

Proxima Centauri, the smallest and faintest component in the system, is the nearest star to the Sun. It lies at a distance of only 4.244 light years. It orbits Alpha Centauri AB with a period of about 547,000 years at a distance that varies from 4,300 to 13,000 astronomical units. It is currently at almost the maximum separation from the pair. 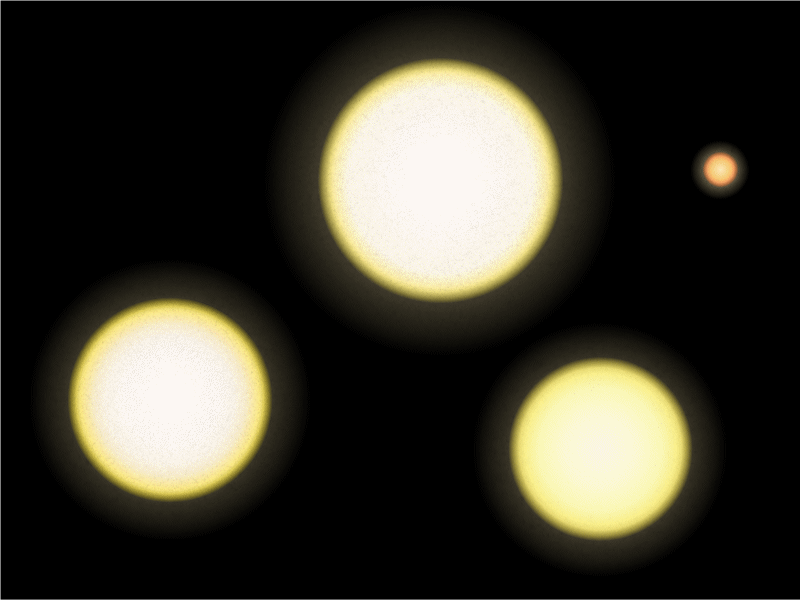 This diagram illustrates, from left to right, the relative size of the Sun, α Centauri A, α Centauri B and Proxima Centauri. Image: Wikimedia Commons/RJHall (CC BY-SA 3.0)

Two candidate exoplanets have been reported to be orbiting Toliman in recent years. The first, designated Alpha Centauri Bb, was detected in 2012 using the HARPS instrument on the 3.6-metre telescope at ESO’s La Silla Observatory in Chile. However, its existence was disputed in 2013 and shown to likely be false two years later.

The second planet, Alpha Centauri Bc, was reported in 2015 after a possible transit event was detected by the Hubble Space Telescope during a search for transits of Alpha Centauri Bb. The event may correspond to a planet roughly the size of Earth (0.92 Earth radii) orbiting Toliman with a period of up to 20.4 days. If Alpha Centauri Bc exists, it is unlikely to harbour life because it is too close to its host star. To be in Toliman’s habitable zone, it would need to orbit the star from a distance between 0.7 and 1.2 astronomical units.

A study published in 2008 simulated the formation of planetary systems around Toliman and found that all simulations resulted in the formation of multiple-planet systems where at least one of the planets orbited at a distance between 0.5 and 1.5 astronomical units and had a mass between 1 and 2 Earth masses.

No planets were detected in the star’s habitable zone during the radial velocity measurements using the High Accuracy Radial Velocity Planet Searcher (HARPS), even though the instrument can detect a planet with 4 Earth masses.

Alpha Centauri was discovered to be a binary star in December 1689. Father Jean Richaud, a Jesuit priest, resolved the two components from Pondicherry, India, while watching a comet.

The large proper motion of Alpha Centauri AB was first reported by the British astronomer Manuel John Johnson, who made his observations from the island of Saint Helena in the South Atlantic Ocean. Johnson reported his findings to the Scottish astronomer Thomas Henderson, who made further observations from the Royal Observatory at the Cape of Good Hope in South Africa between April 1832 and May 1833. Henderson compared his observations with those made by the French astronomer Nicolas Louis de Lacaille in 1751-52 and found a difference between Alpha Centauri’s measured positions in the 1750s and 1830s. He determined the star system’s parallax but found that the value was too high to be correct and did not publish it until 1839, after the German astronomer Friedrich Wilhelm Bessel had reported the parallax for 61 Cygni. Even though Henderson was the first to measure a stellar parallax for Alpha Centauri, it is 61 Cygni that is often cited as the first star to have its parallax measured.

As the closest star system to the Sun, Alpha Centauri has been the target of several interstellar exploration missions that have been proposed in recent decades. One that specifically targeted Alpha Centauri B, called Project Longshot, was developed by NASA and the US Naval Academy in 1987-88. Project Longshot was a conceptual design for an unmanned probe powered by nuclear pulse propulsion, intended to be sent to Alpha Centauri B. The interstellar spacecraft would have taken about 100 years to reach Toliman and enter the star’s orbit, travelling at an average velocity of about 13,411 km/s. Once it reached its destination, it would have sent data back to Earth. The data would have taken 4.39 years to reach home. Longshot would have used a nuclear fission reactor to power lasers that would be used to ignite fusion reactions with Helium-3/Deuterium fuel pellets. The spacecraft would have been powered by nuclear propulsion, which would have enabled it to travel at 4.5% of the speed of light. Since laser fusion still faces a number of technical challenges, the project never really got off the ground.

The name Toliman was approved by the International Astronomical Union’s (IAU) Working Group on Star Names (WGSN) on August 10, 2018.

Toliman is part of the Alpha Centauri system, the third brightest point of light in the sky. Alpha Centauri is easy to find, both because it is bright and because it is located near Hadar, the 11th brightest star in the sky, and the Southern Cross, a prominent southern asterism formed by the brightest stars of the constellation Crux: Acrux, Mimosa, Gacrux, Imai, and Ginan. The Southern Cross is commonly used to find true south. 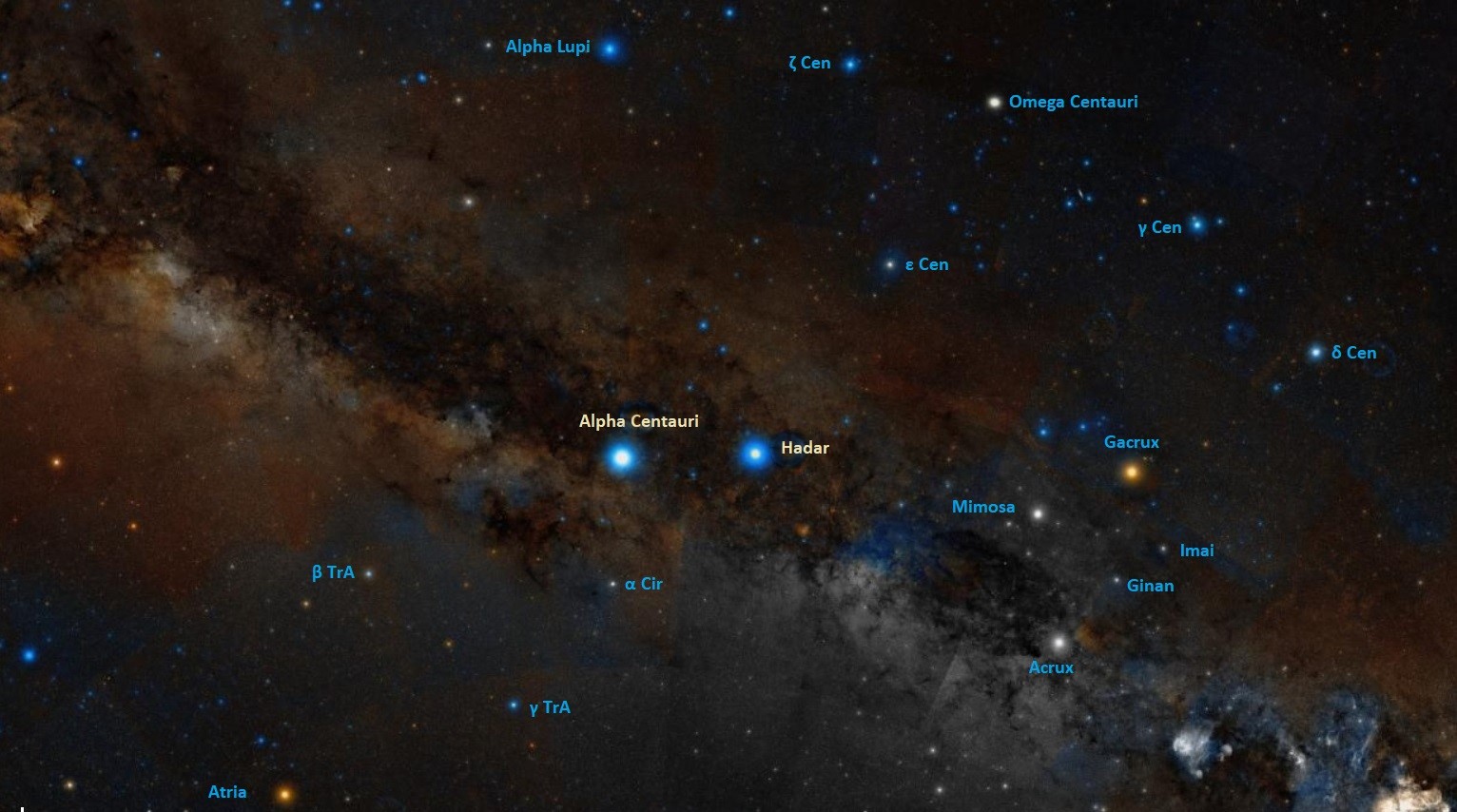 However, Alpha Centauri lies too far south to be visible to most northern observers. It never rises above the horizon for those living north of the latitude 29° N. Observers living between the latitude 29° N and the equator can only see it appearing low above the southern horizon at certain times of year.

In the southern hemisphere, Alpha Centauri is visible for most of the year. For observers living south of the latitude 29° S, the star is circumpolar, i.e. it never falls below the horizon and can be seen year-round.

Toliman is located in the constellation Centaurus. Representing a centaur in Greek mythology, Centaurus is one of the 48 Greek constellations, first listed by the Greek astronomer Ptolemy in his Almagest in the 2nd century CE. Centaurus is best known for being home to Alpha and Beta Centauri, the 3rd and 11th brightest stars in the sky. It also contains HR 5171 (V766 Centauri), one of the largest stars known.

The best known deep sky objects in the constellation include Omega Centauri (NGC 5139), the brightest, largest and most massive globular cluster known in our galaxy, the starburst galaxy NGC 5128 (Centaurus A), the fifth brightest galaxy in the sky, and the Blue Planetary Nebula (the Southerner, NGC 3918), the brightest planetary nebula in the far southern sky. Centaurus is also home to the irregular galaxy NGC 5253, the Centaurus Cluster of galaxies with the brightest member NGC 4946 (an elliptical galaxy), the spiral galaxies NGC 4945 and NGC 4622, the polar-ring lenticular galaxy NGC 4650A, the protoplanetary Boomerang Nebula (ESO 172-7), and the open clusters NGC 3766 and NGC 5460.

The best time of year to see the stars and deep sky objects in Centaurus is during the month of May, when the constellation is at its highest point in the sky in the evening. The entire constellation is visible from locations between the latitudes 25° N and 90° S.