Avior, Epsilon Carinae (ε Car), is a double star located in the southern constellation Carina. With a combined apparent magnitude of 1.86, the star system is the third brightest point of light in Carina, after Canopus and Miaplacidus. It lies at an approximate distance of 610 light years from Earth. Avior is the brightest of the four stars of the False Cross, a prominent southern asterism often mistaken for the Southern Cross.

Epsilon Carinae is a spectroscopic binary pair consisting of an orange giant, Epsilon Carinae A, and a blue-white main sequence dwarf, Epsilon Carinae B. The primary component has the stellar classification K3 III, while the companion is of the spectral type B2 Vp. The two stars may form an eclipsing binary system with a period of 2.15 years (785 days) and oscillations in magnitude of 0.12 during the eclipses.

The distance of the Epsilon Carinae system is between 560 and 660 light years based on the 2007 Hipparcos reduction. The two stars are separated by 0.46 arcseconds on the sky, which translates into a physical distance of about 4 astronomical units, which is less than the average distance from the Sun to Jupiter (5.2 AU). The orange giant is about 2 magnitudes brighter of the two, with an apparent magnitude of 2.166. The companion has an apparent magnitude of 4.121. If it were a single star, it would be visible to the unaided eye in good conditions. Epsilon Carinae B may itself have a companion of the spectral type F8.

Avior is one of the 58 stars selected for navigation. Navigational stars have a special status in the field of celestial navigation because they are exceptionally bright and relatively easy to identify. Avior is one of the three navigational stars in Carina. The other two are the brighter Canopus and Miaplacidus. The three stars belong to the southernmost group of navigational stars. The group consists of 18 stars and includes Rigil Kentaurus, Hadar and Menkent in the constellation Centaurus, Kaus Australis in Sagittarius, Shaula in Scorpius, Atria in Triangulum Australe, Peacock in Pavo, Ankaa in Phoenix, Achernar and Acamar in Eridanus, Suhail in Vela, and Acrux and Gacrux in Crux.

Avior is the 40th brightest star in the sky. With a visual magnitude of 1.68, it is only slightly fainter than Wezen in the constellation Canis Major and Kaus Australis in Sagittarius. It is about as bright as Alkaid in Ursa Major and Sargas in Scorpius, and it just outshines Menkalinan in Auriga, Atria in Triangulum Australe, Alhena in Gemini, and Peacock in Pavo.

Avior forms a prominent southern asterism known as the False Cross with the neighbouring supergiant Aspidiske (Iota Carinae) and two stars in the constellation Vela: Alsephina (Delta Velorum) and Markeb (Kappa Velorum). The False Cross has earned its name by being commonly mistaken for the Southern Cross, formed by the brightest stars in the constellation Crux (Acrux, Mimosa, Gacrux, Imai, and Ginan). The Southern Cross is commonly used in navigation to find true south and can be distinguished from the False Cross by the two exceptionally bright stars that point in its direction: Alpha Centauri and Hadar (Beta Centauri).

The Southern Cross, the False Cross and the Diamond Cross, image: Wikisky

Even though it is the third brightest star in Carina, after Canopus (Alpha Carinae) and Miaplacidus (Beta Carinae), Avior has the designation Epsilon Carinae, not Gamma or Delta. Historically, Carina was part of the larger Argo Navis constellation, which was divided into three smaller ones – Carina, Puppis and Vela – by the French astronomer Nicolas Louis de Lacaille in the 18th century. However, when Lacaille replaced the stars’ Bayer designations, he only used a single Greek-letter sequence for all three constellations. Carina got Alpha and Beta (Canopus and Miaplacidus) – the brightest stars in Argo Navis – Vela got Gamma (Regor) and Delta (Alsephina), and Epsilon went to Carina. The fainter Zeta (Naos) went to Puppis.

The name Avior (pronunciation: /ˈeɪvjər/) is not a traditional name of Epsilon Carinae. It was coined and given to the star by Her Majesty’s Nautical Almanac Office (HMNAO) in the 1930s, before the publication of the Air Almanac. It refers to the star’s use in navigation. The Air Almanac is a navigational almanac published for use by the Royal Air Force, which contains data on the positions of stars and other celestial bodies that helps navigators determine their positions. Before the Air Almanac was published, Epsilon Carinae was one of the two navigational stars that did not have a proper name, so HMNAO assigned it one. The other star without a traditional name was Alpha Pavonis, which was given the name Peacock, a reference to the constellation Pavo (the Peacock), to which it belongs.

The name Avior was officially approved by the International Astronomical Union’s (IAU) Working Group on Star Names (WGSN) on July 20, 2016. It formally applies only to the component Epsilon Carinae A.

Avior is easy to find because it is both bright and part of a conspicuous asterism. It is the brightest of the four stars that form the False Cross and the one appearing the closest to Canopus, the brightest star in Carina. The False Cross lies at roughly the same declination as the slightly brighter Southern Cross and cannot be seen from mid-northern latitudes.

The Diamond Cross, the False Cross and the Southern Cross, image: Wikisky

At the declination -59° 30′ 34.1431″, Avior stays invisible for most northern observers. It does not rise above the horizon for observers north of the latitude 30° N.

Avior can be used to find two prominent deep sky objects that lie in the vicinity of the star. The reflection nebula IC 2220 lies about 1,200 light years away. Also known as the Toby Jug Nebula, IC 2220 is illuminated by the red giant star HD 65750. 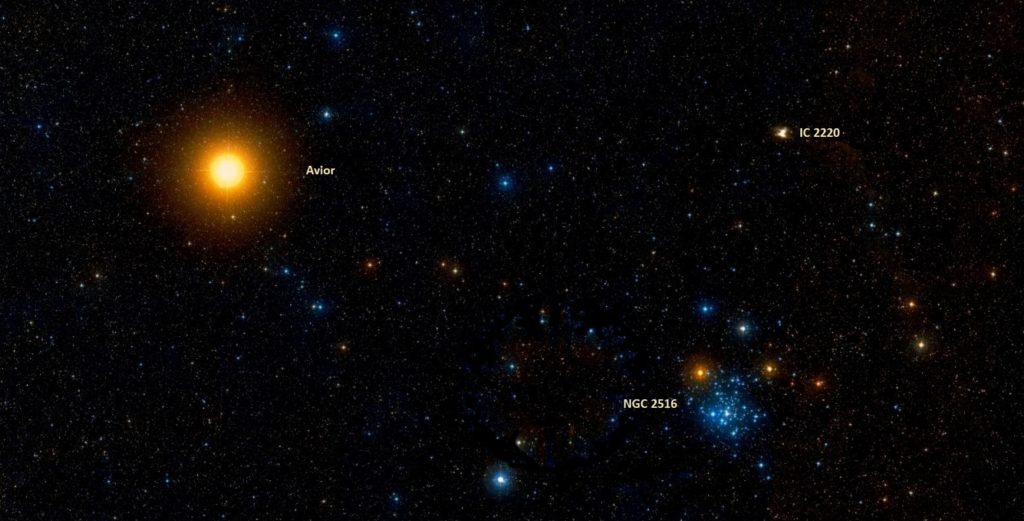 Also known as the Southern Beehive Cluster, the open cluster NGC 2516 occupies 30’ of the sky and has an apparent magnitude of 3.8. It is visible without binoculars on a clear, dark night and its brightest stars can be resolved in binoculars. Like the Southern Pleiades (NGC 2602), also in Carina, NGC 2516 was named after its northern counterpart, the Beehive Cluster (NGC 2632, Messier 44) in the constellation Cancer. Carina is not particularly large, stretching across 494 square degrees of the sky, but it is one of the more prominent constellations in the far southern sky. It contains six stars shining at magnitude 3.00 or brighter. The constellation’s luminary, Canopus (Alpha Carinae), is the second brightest star in the sky, with an apparent magnitude of -0.74. Carina also contains the massive binary star system Eta Carinae, consisting of a luminous blue variable and a supergiant, both enveloped in the Carina Nebula (NGC 3372), one of the brightest and largest diffuse nebulae in the sky.

Other notable deep sky objects in Carina include NGC 3603, an H II region with an apparent magnitude of 9.1, the Wishing Well Cluster (NGC 3352), a globular star cluster visible without binoculars, the Southern Pleiades (Theta Carinae Cluster, NGC 2602), a magnitude 1.9 open cluster, the globular cluster NGC 2808, and the Southern Beehive or Diamond Cluster (NGC 2516), another open cluster visible to the unaided eye.

The best time of year to observe the stars and deep sky objects in Carina is during the month of March, when the constellation is prominent in the evening sky for southern observers. The entire constellation can be seen from locations south of the latitude 20° N.