Miaplacidus, Beta Carinae (β Car), is a blue-white giant star located in the constellation Carina. With an apparent magnitude of 1.69, it is the second brightest star in the constellation, after Canopus. It is one of the four stars that form the Diamond Cross, a prominent southern asterism sometimes mistaken for the Southern Cross. Beta Carinae lies at a distance of 113.2 light years from Earth.

Miaplacidus has the stellar classification A1III, indicating a giant star appearing white or bluish white in colour. A 1990 study estimating stellar temperatures, radii, and luminosities based on spectrophotometry and trigonometric parallaxes listed the star as a subgiant of the spectral type A2 IV. Either way, with an estimated age of only 260 million years, Miaplacidus has already stopped fusing hydrogen in its core and, in another 2-3 million years, it will evolve into a red giant.

Miaplacidus has a mass 3.5 times that of the Sun and, as it evolved away from the main sequence, it has expanded to a size of 6.8 solar radii. With a surface temperature of 8,866 K, it is 288 times more luminous than the Sun. The star is a fast spinner, with a projected rotational velocity of 145.7 km/s.

Miaplacidus is not massive enough to end its life as a supernova. Instead, when it reaches the end of its life cycle, it will cast off its outer envelope and gradually fade away as a white dwarf.

Miaplacidus is one of the three bright stars in Carina selected for navigation. The other two are the brighter Canopus and slightly fainter Avior. Navigational stars play a special role in the field of celestial navigation because they are particularly bright and easy to identify. The three brightest stars in Carina are among the 18 southern navigational stars with a declination between 30° S and 90° S. Other stars in this group include Rigil Kentaurus (Alpha Centauri A), Hadar (Beta Centauri), Menkent (Theta Centauri), Achernar (Alpha Eridani), Acamar (Theta Eridani), Kaus Australis (Epsilon Sagittarii), Peacock (Alpha Pavonis), Atria (Alpha Trianguli Australis), Ankaa (Alpha Phoenicis), Shaula (Lambda Scorpii), Acrux (Alpha Crucis), and Gacrux (Gamma Crucis).

Miaplacidus is the 28th brightest star in the sky. It is only slightly fainter than Shaula in the constellation Scorpius, Gacrux in Crux, Bellatrix in Orion, and Elnath in Taurus, and it just outshines Alnair in Grus, Alnilam and Alnitak in Orion, and Alioth in Ursa Major.

Miaplacidus forms an asterism known as the Diamond Cross with the neighbouring Theta Carinae, Upsilon Carinae, and Omega Carinae. Named for its diamond shape, the asterism can be seen from locations south of the latitude 20° N.

The Diamond Cross, the False Cross and the Southern Cross, image: Wikisky

The Diamond Cross can be mistaken for one of the other two cross-shaped asterisms in the far southern sky: the Southern Cross, formed by the brightest stars of Crux (Acrux, Mimosa, Gacrux, Imai and Ginan) and commonly used to find true south, and the False Cross, formed by Alsephina (Delta Velorum), Markeb (Kappa Velorum), Avior (Epsilon Carinae), and Aspidiske (Iota Carinae). All three asterisms are kite-like in appearance and lack a central star.

In the 17th century, Miaplacidus was the brightest star in the short-lived constellation called Robur Carolinum (Latin for “Charles’ oak”). Created by the English astronomer Edmond Halley in 1679, the constellation consisted of stars that have historically belonged to Centaurus, Carina and Vela. It was named to commemorate the Royal Oak within which the future King Charles II of England had hidden from Oliver Cromwell’s troops after the Battle of Worcester in 1651. The constellation fell into disuse after about 50 years. As its luminary, Miaplacidus had the designation Alpha Roburis Carolii, or simply Alpha Roburis. The luminous blue variable Eta Carinae, the central star of the Homunculus Nebula in the Carina Nebula, was also part of the constellation.

The origin of the name Miaplacidus (pronunciation: /ˌmaɪəˈplæsɪdəs/) is uncertain. The name may be derived from the Arabic miyāh, meaning “waters,” and Latin placidus, meaning “placid.” This was proposed by William Henry Higgins in his 1882 book The Names of the Stars and Constellations: Compiled from the Latin, Greek, and Arabic. The name first appeared in American astronomer Elijah Hinsdale Burritt’s Geography of the Heavens, a star atlas published in 1856. It was officially approved by the International Astronomical Union’s (IAU) Working Group on Star Names (WGSN) on July 20, 2016.

Miaplacidus lies in the southern sky and cannot be observed from locations north of the latitude 20° N. From the southern hemisphere, the star is relatively easy to find because it is part of a prominent asterism, the Diamond Cross. The Diamond Cross is located in the area between the Southern Cross and the False Cross, and Miaplacidus is the brightest star in the asterism. It marks the southwest corner of the Cross, appearing closest to Canopus of the four stars. The star is circumpolar, i.e. it never sets and is visible throughout the year, for observers south of the latitude 20° S.

The Southern Cross, the False Cross and the Diamond Cross, image: Wikisky

Miaplacidus can be used to find two deep sky objects that lie in the same field of view as the star. The spiral galaxy NGC 2836 has an apparent magnitude of 11.8 and lies approximately 67.2 million light years away. The planetary nebula IC 2448 has a visual magnitude of 11.10 and lies at a distance of about 11,000 light years. 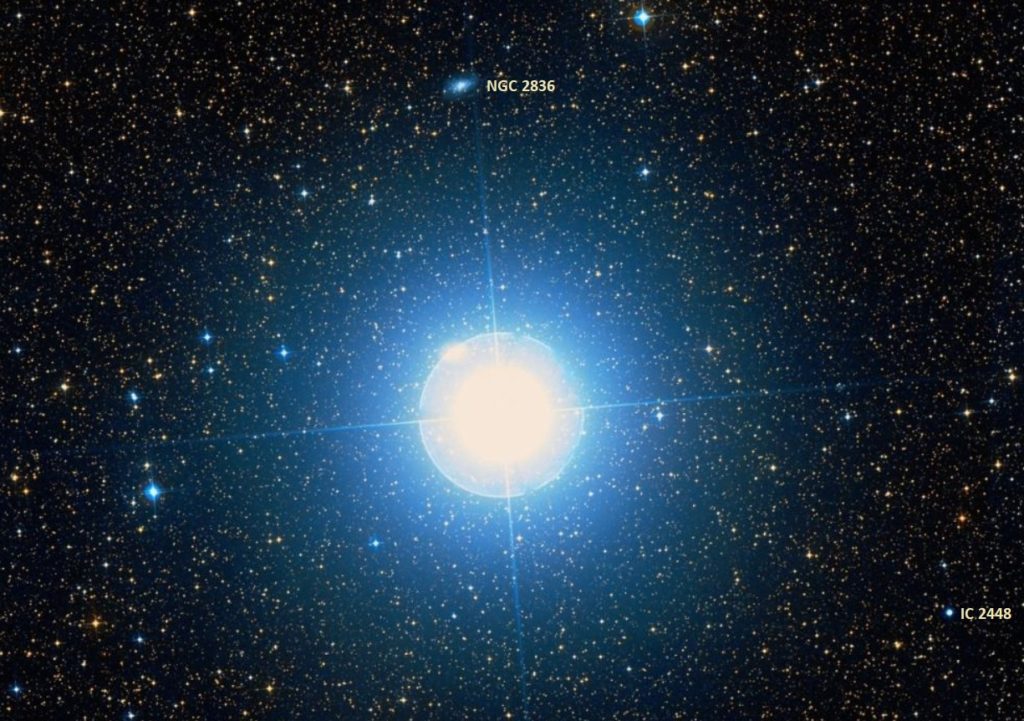 Miaplacidus is located in the constellation Carina. Representing the keel of the Argo, the ship on which Jason and the Argonauts sailed on their quest for the Golden Fleece, Carina was once part of the much larger constellation Argo Navis (the ship Argo), which was split into three smaller ones – Carina, Puppis and Vela – by the French astronomer Nicolas Louis de Lacaille in the 18th century.

Occupying an area of 494 square degrees of the far southern sky, Carina is the 34th largest of the 88 constellations. It is one of the more conspicuous southern constellations, with six stars brighter than magnitude 3.00, including Canopus, the second brightest star in the sky.

The best time of year to observe the stars and deep sky objects in Carina is during the month of March. The entire constellation is visible south of the latitude 20° N.