Suhail, Lambda Velorum (λ Vel) is an orange supergiant star located in the constellation Vela. With an average apparent magnitude of 2.21, it is the third brightest star in Vela, after Regor (Gamma Velorum) and Alsephina (Delta Velorum). Suhail lies at an approximate distance of 545 light years from Earth.

Suhail is an evolved supergiant star of the spectral type K4 Ib. It has a mass seven times that of the Sun and has expanded to a size of 210 solar radii. With an effective temperature between 3,800 and 4,000 K, it is 7,900 times more luminous than the Sun. The star is a very slow spinner, with a projected rotational velocity of 6.7 km/s. Its estimated age is about 31.6 million years.

Suhail is classified as a slow irregular variable (type Lc) and its brightness varies from magnitude 2.14 to 2.30. Type Lc stars are irregular variable supergiants that exhibit brightness variations with an amplitude of about 1 magnitude. Other stars of this type include Enif in the constellation Pegasus, Antares in Scorpius, Pi Aurigae in Auriga, Unurgunite (Sigma Canis Majoris) and Omicron1 Canis Majoris in Canis Major, and V337 Carinae in Carina.

Lambda Velorum is believed to be on the asymptotic giant branch (AGB) or in the evolutionary stage just preceding it. The asymptotic giant branch is a late stage in the evolution of stars with a mass between 0.6 and 10 solar masses, that have exhausted the supply of hydrogen in their cores. AGB stars have inert cores of carbon and oxygen, shells where helium is fused to carbon, and shells where hydrogen is fused to form helium. Once the helium shell runs out of fuel, they enter the thermally pulsing phase, when hydrogen fusion becomes the main source of energy and thermal pulses cause even higher mass loss.

There is also a possibility that Suhail is a slightly more massive star on the red giant branch (RGB), the stage right after the main sequence, before core helium ignition takes place.

The ultimate fate of Suhail is uncertain. The star may be massive enough to end its life in an electron capture supernova. If not, when it reaches the end of its life cycle, it will expel its outer layers to form a planetary nebula and gradually fade away as a white dwarf, possibly of the neon-oxygen variety.

Suhail has a visual companion at a separation of 18.2 arcseconds. The star has an apparent magnitude of 14.81 and can only be seen in large telescopes.

Suhail is one of the 58 bright stars selected for navigation. It is the only navigational star in Vela. It is one of the 18 southern navigational stars with a declination between 30° S and 90° S. Other stars in this group include Canopus, Avior and Miaplacidus in the constellation Carina, Ankaa in Phoenix, Alpha Centauri, Hadar and Menkent in Centaurus, Achernar and Acamar in Eridanus, Acrux and Gacrux in Crux, Fomalhaut in Piscis Austrinus, Kaus  Australis in Sagittarius, Shaula in Scorpius, and Peacock in Pavo.

The Chinese know Suhail as 天記 (Tiānjì), Judge for Estimating the Age of Animals. In Chinese astronomy, Lambda Velorum is the sole star in the asterism known as Judge for Estimating the Age of Animals. The asterism is part of the Ghosts mansion, one of the southern mansions of the Vermilion Bird. The star’s Chinese name has been westernized into Tseen Ke, which is also the traditional name of Phi Velorum and means “record of heaven” or, more simply, “star chart.”

Suhail lies in the southern sky and does not rise above the horizon for observers north of the latitude 47° N. It can be found using Sirius and three other bright stars of Canis Major – Aludra, Wezen and Adhara – that form a distinct triangle under Sirius. The stars that form the False Cross – Avior, Aspidiske, Markeb and Alsephina – can also be used for orientation. A line extended from Sirius to just left of Aludra points in the direction of Suhail. Alternatively, a line drawn from Meissa (Lambda Orionis), the star that marks the head of Orion, through Sirius, leads directly to Suhail. 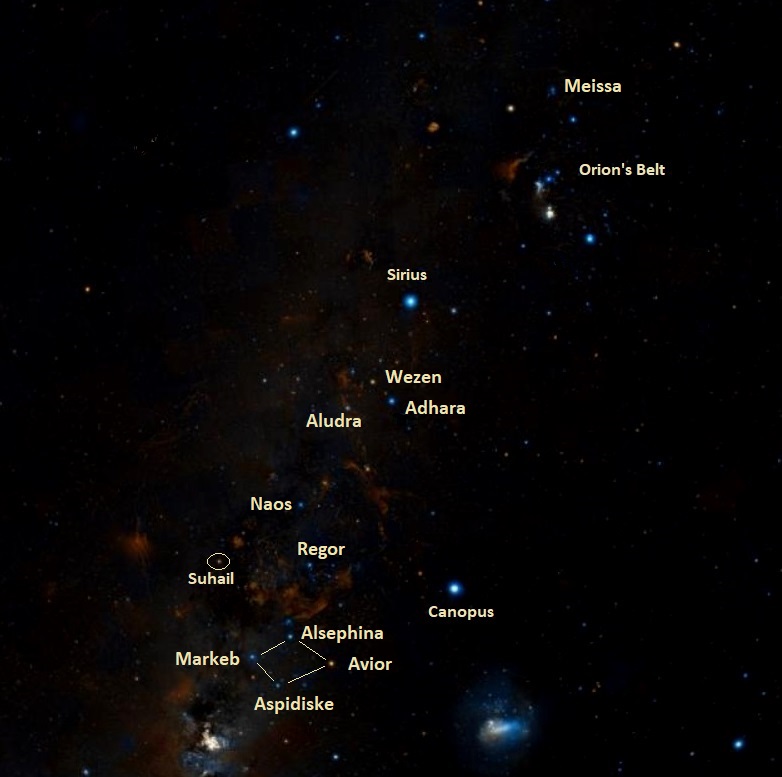 Suhail forms a large triangle with Sirius and Canopus, the two brightest stars in the sky, and lies just above the False Cross, a prominent southern asterism often mistaken for the Southern Cross. 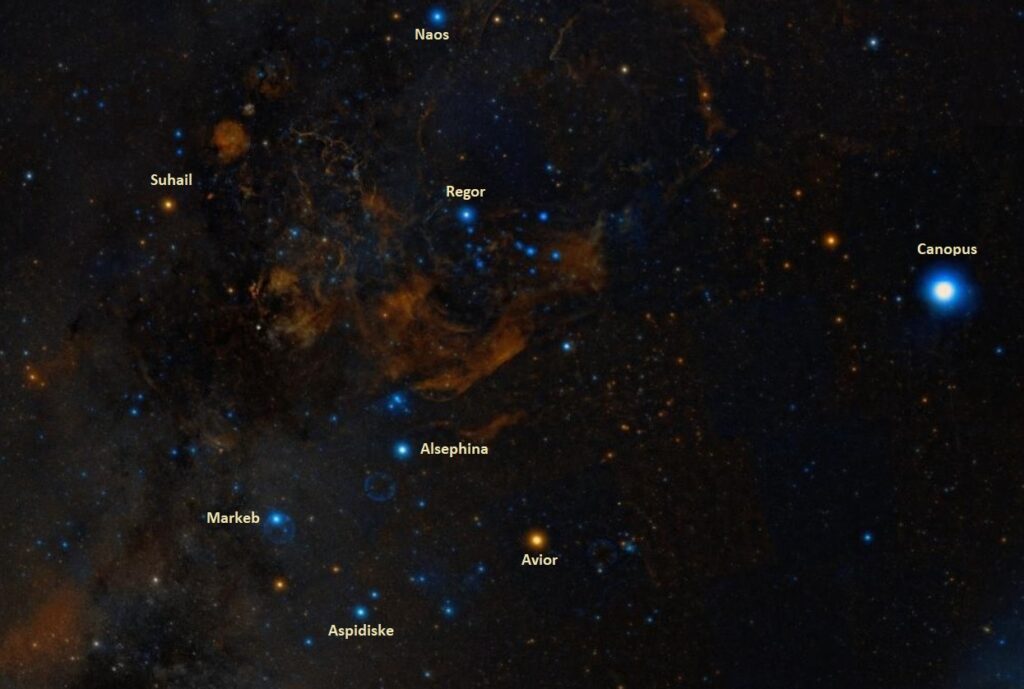 Vela is the 32nd largest of the 88 constellations, occupying 500 square degrees of the sky. It lies in the second quadrant of the southern celestial hemisphere. With five stars brighter than magnitude 3.00 and two of them – Alsephina (Delta Velorum) and Markeb (Kappa Velorum) – part of an asterism known as the False Cross, the constellation is fairly familiar to southern observers.

Vela contains a number of interesting deep sky objects. These include the Eight-Burst Nebula (NGC 3132), a planetary nebula nicknamed the Southern Ring Nebula for its resemblance to its northern counterpart (Messier 57), the planetary nebula NGC 2899, the emission nebulae Gum 12 (the Gum Nebula) with the 11,000-year-old Vela Supernova Remnant and Vela Pulsar, and Gum 20 (RCW 36), one of the nearest sites of massive-star formation to the Sun, the globular cluster NGC 3201, and the Omicron Velorum Cluster (IC 2391), a magnitude 2.5 open cluster that stretches across 50 arcminutes of the sky and can be seen without binoculars.

The best time of year to observe the stars and deep sky objects of Vela is during the month of March, when the constellation is prominent in the evening sky. Vela is visible in its entirety between the latitudes 30° N and 90° S.