Alnair, Alpha Gruis (α Gru), is a blue-white main sequence star located in the constellation Grus. With an apparent magnitude of 1.74, it is the brightest star in Grus and the 30th brightest star in the sky. It is only slightly fainter than Bellatrix and Alnilam in the constellation Orion, Elnath in Taurus, and Miaplacidus in Carina, and it just outshines Alnitak in Orion, Alioth and Dubhe in Ursa Major, and Mirfak in Perseus. Alnair lies at a distance of 101 light years from Earth.

Alnair is a main sequence star of the spectral type B6 V. Some sources classify it as a subgiant of the spectral type B7 IV. Both classifications indicate a star appearing bluish or blue-white in colour, but the first one indicates that it is still fusing hydrogen in its core, while the second suggests that it is running out of hydrogen and has started to move away from the main sequence.

Alnair has four times the Sun’s mass and a radius 3.4 times solar. With a temperature of 13,920 K, it shines with 520 solar luminosities. The star is a very fast spinner, with a projected rotational velocity of 215 km/s at the equator. It completes a rotation in less than a day. Alnair’s estimated age is 100 million years. Alnair’s age and proper motion indicate that the star may be associated with the AB Doradus Moving Group, a stellar association with about 30 members that share a common origin and motion through space. The group is the nearest known moving group to the solar system, located at a distance of about 20 parsecs. The estimated age of the members is between 50 and 150 million years. Based on its motion and age, the group is suspected to have formed in the same star-forming region as the Pleiades cluster at around the same time.

The name Alnair (pronunciation: /ælˈnɛər/) is derived from the Arabic al-nayyir, meaning “the bright one.” The name comes from the phrase al-nayyir min dhanab al-ḥūt (al-janūbiyy), which means “the bright one from the (southern) fish’s tail.” The name was also sometimes spelled Al Nair or Al Na’ir. In Arabic astronomy, Alnair and several other Grus stars – Beta, Delta, Theta, Iota and Lambda Gruis – belonged to the constellation Piscis Austrinus. They were not, however, part of the Greek Piscis Austrinus, first listed by the Greco-Roman astronomer Ptolemy in the 2nd century CE.

The name Alnair was listed as the proper name of Zeta Centauri in mid-20th century astronomical ephemerides. Zeta Centauri was known as Nayyir Badan Qanṭūris, “the bright star of the body of the centaur.” However, the WGSN approved the name for Alpha Gruis, and Zeta Centauri does not have an official proper name yet.

Alnair is one of the brightest stars in the sky, but it stays invisible for northern observers living north of latitude 42° N and, at best, appears very low above the southern horizon from mid-northern latitudes.

Alnair forms a triangle with the brighter Achernar in Eridanus and Fomalhaut in Piscis Austrinus, and lies in the region of the sky between Fomalhaut and Peacock in the constellation Pavo. 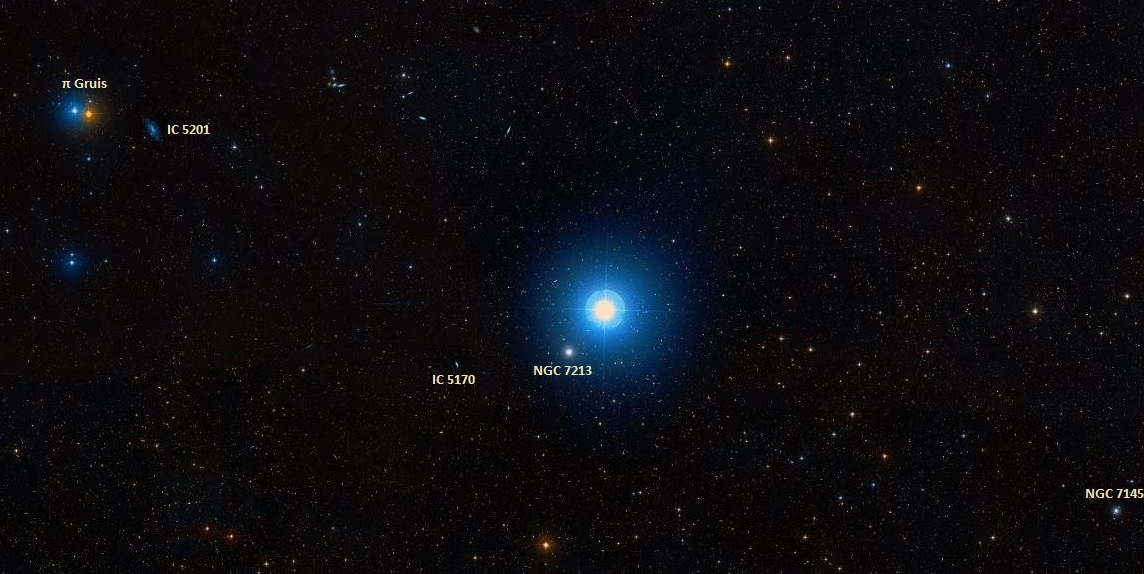 Alnair is located in the constellation Grus, the Crane. Grus is one of the constellations that first appeared in Johann Bayer’s celestial atlas Uranometria in 1603. It was created by the Dutch-Flemish astronomer Petrus Plancius based on observations of Dutch explorers in the 16th century. The constellation can be seen in its entirety from latitudes between 34° N and 90° S. Grus and the nearby Tucana, Phoenix and Pavo (the Toucan, the Phoenix and the Peacock) are known as the Southern Birds. The best time of year to observe the stars and deep sky objects of Grus is during the month of October, when the constellation is high in the evening sky.