Procyon, Alpha Canis Minoris (α CMi), is a binary star system with an apparent magnitude of 0.34, located at a distance of only 11.46 light years from Earth in the constellation Canis Minor. Like its brighter neighbour Sirius in Canis Major, it is one of the nearest star systems to the Sun. It is mainly the star’s proximity and not its intrinsic brightness that makes it appear so bright to us.

Procyon is the brightest star in Canis Minor and the 8th brightest star in the sky. It is slightly fainter than Rigel in Orion and a little brighter than Achernar in Eridanus. It is sometimes (rarely) outshone by the variable supergiant Betelgeuse, located in the same area of the sky, but much further away from us than Procyon.

The Procyon system is composed of Procyon A, a white hydrogen-fusing dwarf of the spectral type F5 IV-V, and Procyon B, a much fainter white dwarf companion with the stellar classification DQZ. The two stars have an orbital period of 40.82 years and an elliptical orbit with an eccentricity of 0.407. Their orbit is inclined at 31.1° to our line of sight. It takes the two stars within 8.9 astronomical units of each other and as far apart as 21 astronomical units. Their average separation is 15 astronomical units, almost the distance from the Sun to Uranus. Procyon A has the stellar classification F5 IV-V, indicating an evolved star still on the main sequence, appearing white in colour. The star’s brightness, which is high for its class, indicates that the star has almost run out of hydrogen in its core and begun to expand as it continues to evolve into a subgiant.

Procyon A has a mass of 1.499 solar masses and a radius twice that of the Sun. With an effective temperature of 6,530 K, it shines with 6.93 solar luminosities. Its estimated age is 1.87 billion years.

The star will continue to expand until it is 80 to 150 times its current size and turn orange or red at some point in the next 10 to 100 million years. It will end its life as a white dwarf, one not unlike Procyon B.

Procyon B is much smaller than the primary star, with only 0.6 solar masses – unusually low for this type of star – and a size of only 0.012 solar radii. It has an apparent magnitude of only 10.7. The star’s existence was inferred from astrometric observations before it was confirmed visually.

Procyon B is harder to observe than Sirius B because the angular separation between the two components in the Alpha CMi system is smaller, only 5 arcseconds at the most. Procyon B is also fainter and significantly less massive than Sirius B, even though it has a larger estimated radius (8,600 km) than its neighbour (5,800 km).

Procyon B has the stellar classification DQZ, indicating a white dwarf star (D) with an atmosphere rich in carbon (Q) and heavy elements (Z).

The estimated mass of the progenitor star was about 2.59 solar masses. The star is believed to have spent about 680 million years on the main sequence, fusing hydrogen in its core, before evolving into a giant, losing most of its mass due to stellar winds, and ending its life cycle about 1.19 billion years ago, when it became a white dwarf. 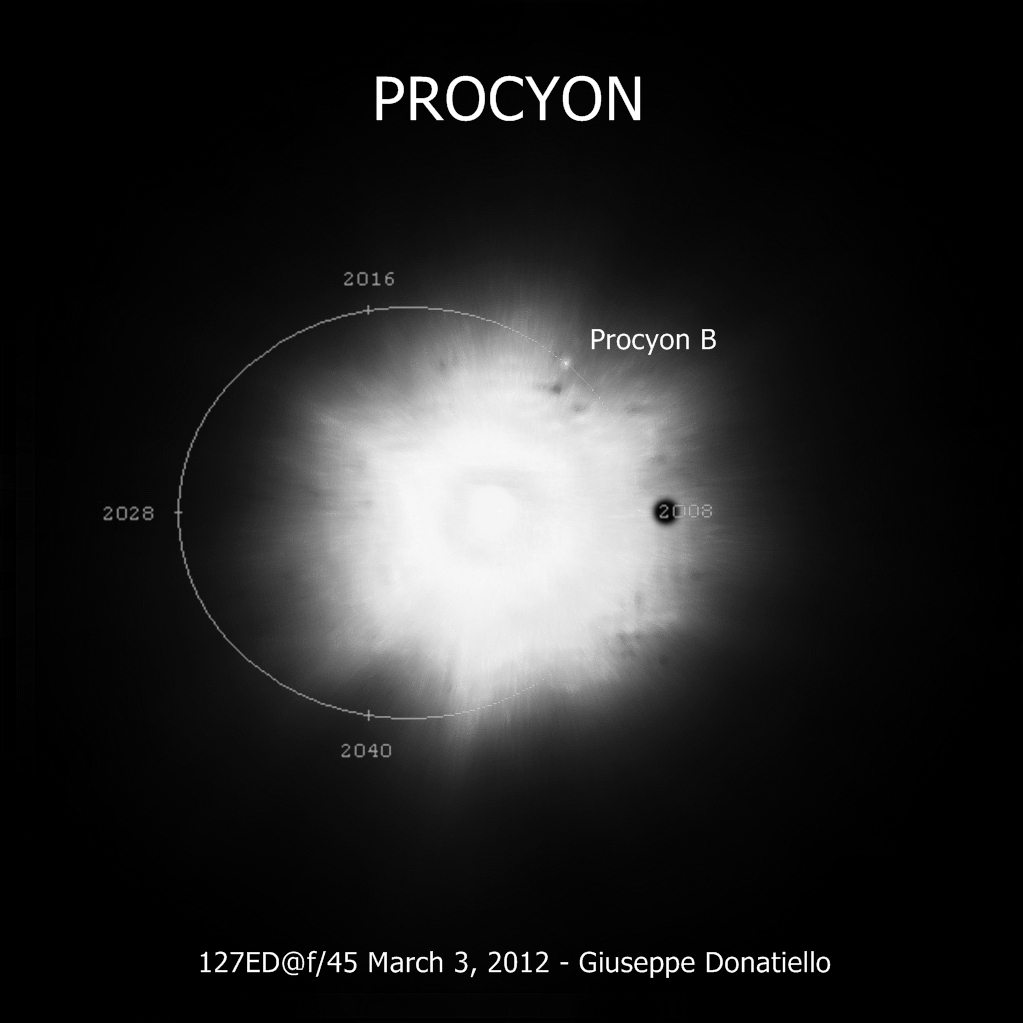 Procyon A and Procyon B, image: Giuseppe Donatiello (CC0 1.0)

Procyon is one of the 58 bright stars that have been given special status in the field of celestial navigation. Navigational stars are some of the brightest and most recognizable stars in the sky.  They include many of Procyon’s bright neighbours: Sirius, Adhara, Betelgeuse, Rigel, Bellatrix, Alnilam, and Pollux.

The existence of Procyon B was first inferred in the 19th century. The German astronomer and physicist Friedrich Bessel was the first to propose that Procyon had an unseen companion in 1844. Bessel noticed irregularities in the motions of both Procyon and Sirius and attributed them to gravitational attraction of “dark” companions. His claim led to the discovery of both Procyon B and Sirius B.

In 1862, German astronomer Arthur Auwers calculated the orbit of Procyon B from its effects on the primary star. He detected Sirius B using the same method. At the time, telescopes powerful enough to observe the companion stars did not exist.

The existence of Procyon B was visually confirmed in 1896 by the German-American astronomer John Martin Schaeberle, who used the 36-inch refractor at Lick Observatory on Mount Hamilton in California. It was the largest refractor in the world between 1888 and 1897.

Procyon, Sirius and Arcturus shifting enough across the sky since ancient times was what led to the discovery of proper motion in 1718. English astronomer and mathematician Edmond Halley is credited for the discovery. Halley compared his astrometric measurements to those given in Ptolemy’s Almagest (2nd century CE) and found that the “fixed” stars were not in fact fixed.

In medieval astrology, Procyon was one of the 15 Behenian fixed stars, to which astrologers attributed special powers. Procyon was considered a very fortunate star, portending fame and wealth. It was linked with the planets Mercury and Mars.

The name Procyon (pronunciation: /ˈproʊsiɒn/, with stress on the first syllable) is derived from the Greek Προκύων (Prokyon), which means “before the dog.” The name is a reference to Procyon rising before Sirius, the Dog Star, when seen from most locations north of the equator.

The International Astronomical Union’s (IAU) Working Group on Star Names (WGSN) officially approved the name for Alpha Canis Minoris A on June 30, 2016. Even though it formally applies only to the primary component, it is also commonly used for the entire system and for its fainter component (Procyon B).

Procyon has been known by many names throughout history. These include Antecanis (“before the dog”), the Latin translation of the name, and the Arabic names Al Shira, from aš-ši‘ra aš-šamiyah, meaning “the Syrian sign,” and Elgomaisa, from al-ghumaisa’, meaning “the bleary-eyed (woman).” In an older Arabic tradition, Procyon was associated with the “bleary-eyed woman” and Sirius with “the teary-eyed woman.” Variants of Elgomaisa (Algomeiza, Algomeyza) were used on medieval astrolabes in Europe. Today, it is the star Beta Canis Minoris that is known as Gomeisa.

Procyon is one of the 27 stars featured on the flag of Brazil. Each star symbolizes a Brazilian Federative Unit and Procyon represents the state of Amazonas.

The Kalapalo people in the Brazilian state of Mato Grosso saw Procyon and Canopus as part of an asterism called Kofongo, or Duck, which signalled the beginning of the rainy season and the increase in manioc. The stars Castor and Pollux in Gemini represented the Duck’s hands.

Procyon and Sirius were mentioned in numerous ancient texts and played a prominent role in many ancient cultures, including Babylon and Egypt. To Babylonians, Procyon represented Nangar, an aspect of the god Marduk known as the Carpenter, who rebuilt the heavens and organised the sky, constructing stations for the gods, fixing their celestial likeness as constellations and defining the days of the year.

The Greeks associated Procyon with Maera, a hound that belonged to Erigone, the daughter of Icarius of Athens in Greek mythology. Icarius was a follower of the god Dionysus, who taught him to make wine. When Icarius gave wine to some shepherds, they drank it and, believing they had been poisoned, they attacked Icarius. Icarius’ body was found by his daughter and her dog. Erigone was so overwhelmed with grief that she hanged herself, while Maera jumped off a cliff. This made Dionysus so angry that he unleashed a plague on Athens and inflicted insanity on all unmarried women in the city, who all hanged themselves, just like Erigone. The plague only ceased after Athenians introduced rites to honour Icarius and Erigone. Dionysus placed the father, the daughter and the dog in the sky as the constellations Boötes (Icarius), Virgo (Erigone) and the star Procyon (Maera).

In Macedonian folklore, Sirius and Procyon were known as “the wolves” (Volci) circling around a plough with oxen, represented by the constellation Orion. In Hawaii, Procyon was known as Puana, meaning “blossom.” It was part of an asterism called Ke ka o Makali’I, or “the canoe bailer of Makali’I,” which it formed with Sirius, Capella, Castor and Pollux.

The Maori called the star Puangahori and Tahitians knew it as Anâ-tahu’a-vahine-o-toa-te-manava, or “star-the-priestess-of-brave-heart,” and considered it one of the pillars holding the sky.

The Inuit knew the star as Sikuliarsiujuittuq, which means “the one who never goes onto the newly formed sea-ice.” The name refers to a man who was too obese to go on ice to hunt and instead stole food from other hunters in his village. The other hunters did away with him after persuading him to go on the sea ice. Procyon appears red during Arctic winter and the red colour symbolized the man’s dire end.

Procyon is very easy to find because it is a first magnitude star and because of its proximity to Orion, one of the most recognizable constellations, as well as to Sirius, the brightest star in the sky. From mid-northern latitudes, Procyon appears just to the left of Orion’s hourglass asterism, above Sirius. 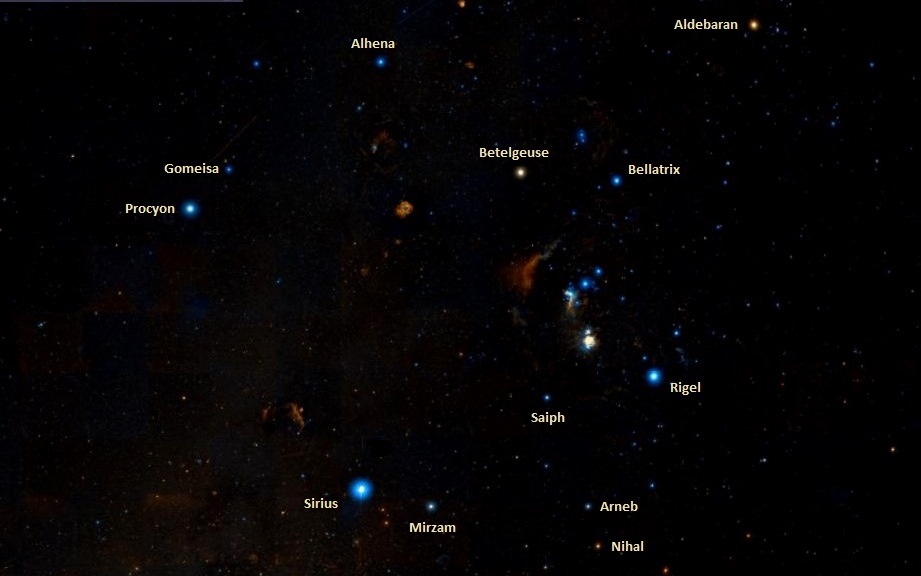 Procyon forms the Winter Triangle with its bright neighbours Sirius and Betelgeuse, and also marks one of the vertices of the larger Winter Hexagon. The Winter Hexagon, or Winter Circle, is formed by Procyon and Sirius with the bright Pollux in Gemini, Capella in Auriga, Aldebaran in Taurus, and Rigel in Orion. Even though there aren’t any bright deep sky objects in the immediate vicinity of Procyon, the star can be used to find the bright Rosette Nebula, a vast H II region in the constellation Monoceros, which lies in the region of the sky between Procyon and Betelgeuse. Procyon is located in the northern constellation Canis Minor, the Smaller Dog. Representing the smaller dog following Orion, the Hunter, Canis Minor is one of the smaller constellations, only the 71st in size. It can be seen in its entirety from any location except those south of latitude 75°S. Even though the Milky Way passes through it, the constellation does not have any particularly bright deep sky objects.  It is best known for its brightest stars – Procyon and Gomeisa – as well as for Luyten’s Star, one of the nearest stars to Earth, a red dwarf located only 1.2 light years from Procyon and 12.36 light years from the Sun.