Shaula, Lambda Scorpii (λ Sco), is a triple star system located at a distance of about 570 light years from Earth in the direction of the constellation Scorpius. With an apparent magnitude of 1.62, it is the second brightest star in Scorpius, fainter only than the red supergiant Antares.

Shaula is the 24th brightest star in the sky. It is only slightly fainter than Regulus in the constellation Leo, Adhara in Canis Major and Castor in Gemini, and it just outshines Gacrux in Crux, Bellatrix in Orion and Elnath in Taurus.

Lambda Scorpii consists of three components: two B-type stars, appearing bluish in colour, and a faint pre-main sequence companion. Lambda Scorpii A, the primary star in the system, is a hot blue-white subgiant star of the spectral type B2IV that has either already stopped fusing hydrogen in its core or will soon do so. Due to its high mass, it will probably end its life as a supernova. The star has 14.5 solar masses and a radius 8.8 times that of the Sun. It is 36,300 times more luminous than the Sun.

Lambda Scorpii A is classified as a Beta Cephei-type variable, which means that it exhibits small, rapid changes in brightness – less than a tenth of a magnitude – as a result of pulsations of its surface. It changes brightness with two periods, 0.2137 and 0.1069 days. The pulsations are caused by an abundance of iron deep beneath the surface, where the temperature reaches 200,000 K, causing the iron to increase in opacity. As a result, there is a subsurface build-up of energy that increases pressure and pushes the layers out over several hours.

Lambda Scorpii B is a 15th magnitude class B2 star separated by 4 arcseconds from the primary, and Lambda Scorpii C,  believed to be a pre-main sequence star, has a visual magnitude of 12.0 and lies 95 seconds of arc away.

Shaula and its brighter neighbour Antares are among the 58 stars selected for navigation. Navigational stars are some of the brightest and most recognizable stars in the sky. They play a special role in the field of celestial navigation.

Shaula is one of the stars on the flag of Brazil. Each star symbolizes a Brazilian Federative Unit and Shaula represents the state of Rio Grande do Norte.

In fiction, Lambda Scorpii was notably used in The Transformers comic book series. Cybertron, the Transformers home world, orbits the star in the IDW comics.

The name Shaula (pronunciation: /ˈʃɔːlə/) is derived from the Arabic al-šawlā´, “the raised (tail),” referring to the star’s position in the scorpion’s tail. It was officially approved for Lambda Scorpii Aa by the International Astronomical Union’s (IAU) Working Group on Star Names (WGSN) on July 20, 2016.

The star’s Chinese name is also a reference to the Tail (尾宿), an asterism the star forms with Epsilon, Zeta1, Zeta2, Eta, Theta, Iota1, Iota2, Kappa, Mu1 and Upsilon Scorpii. Shaula is known as the “Eighth Star of the Tail” (尾宿八).

Shaula and its fainter neighbour Lesath (Upsilon Scorpii) are listed in the Bablyonian MUL.APIN as dSharur4 u dShargaz (Sharur and Shargaz). In Coptic, they were known as Minamref, meaning “the Sting,” while the Boorong people in northwestern Victoria in Australia called the pair Karik Karik, meaning “the Falcons.”

As the name suggests, Shaula marks the scorpion’s stinger. It lies at the end of its tail together with Lesath, Upsilon Scorpii. Even though the two stars appear close together, they are not a physical pair. They only form an optical pair and are sometimes known as the “Cat’s Eyes.” 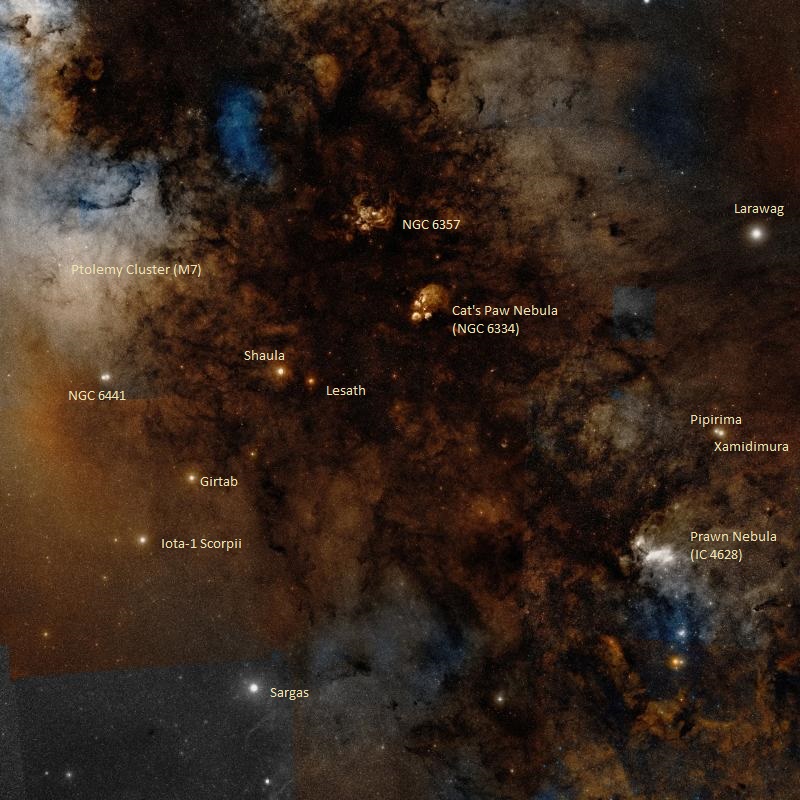 Shaula lies in a region of the sky populated by a number of interesting deep sky objects. These include the Ptolemy Cluster (Messier 7), one of the brightest open clusters in the sky, NGC 6441, one of the most massive and luminous globular clusters in our galaxy, the diffuse nebula NGC 6357, nicknamed the War and Peace Nebula, the Prawn Nebula (IC 4628), a vast emission nebula, and Cat’s Paw Nebula (NGC 6334), an emission nebula named for its striking resemblance to a cat’s footprint.

Shaula is located in the constellation Scorpius, one of the most recognizable constellations in the sky. Like all zodiac constellations, Scorpius was first catalogued by the Greco-Roman astronomer Ptolemy in the 2nd century AD.

The constellation lies in a rich area of the Milky Way in the direction of the Galactic Centre and contains a number of notable clusters and nebulae. In addition to those already mentioned, Scorpius is home to the bipolar planetary Butterfly Nebula (NGC 6302), the star cluster Messier 4, one of the nearest globular clusters to the Sun, the globular cluster Messier 80, and the open clusters Messier 6 (the Butterfly Cluster), NGC 6281 and NGC 6231 (the Northern Jewel Box Cluster.) The best time of year to observe Shaula and Scorpius from the northern hemisphere is in the summer, when the constellation appears highest above the southern horizon.  South of the equator, Scorpius is best seen in the months of winter and spring.