Ankaa, Alpha Phoenicis (α Phe), is a spectroscopic binary star located in the southern constellation Phoenix. The primary component in the system is an orange giant about 15 times larger than the Sun. With an apparent magnitude of 2.377, Ankaa is the brightest star in Phoenix. It lies at a distance of 85 light years from Earth.

Alpha Phoenicis is a spectroscopic binary star system composed of two stars that orbit each other with a period of 3848.8 days, or 10.5 years. The stars are separated by 103.5 ± 8.2 milliarcseconds on the sky, which corresponds to a real average separation of about 7 astronomical units.

The system has the stellar classification K0.5 IIIb, indicating an orange giant. The limb-darkened angular diameter of the primary component has been measured at 5.25 ± 0.06 milliarcseconds, which translates into a physical size of about 15 solar radii. With a mass 2-3 times that of the Sun, Ankaa is not massive enough to go out as a supernova. Instead, when it reaches the end of its life cycle, it will cast away its outer layers and slowly fade away as a faint white dwarf. Ankaa is one of the 58 bright stars selected for use in navigation. It is the only navigational star in Phoenix. It belongs to a group of 18 navigational stars with a declination between 30° S and 90° S. Other stars in this group are Achernar and Acamar in the constellation Eridanus, Fomalhaut in Piscis Austrinus, Kaus Australis in Sagittarius, Shaula in Scorpius, Peacock in Pavo, Canopus, Miaplacidus and Avior in Carina, Acrux and Gacrux in Crux, Suhail in Vela, Alnair in Grus, Atria in Triangulum Australe, and Rigil Kentaurus, Hadar and Menkent in Centaurus.

On average, Ankaa is the 84th brightest star in the sky. It is about as bright as Merak in the constellation Ursa Major, Izar in Boötes, Enif in Pegasus, and Girtab in Scorpius. It just outshines Phecda in Ursa Major, Sabik in Ophiuchus, Scheat in Pegasus, and Aludra in Canis Major.

The name Ankaa (pronunciation: /ˈæŋkə/) is derived from the Arabic al-ʽanqā, meaning “the phoenix.” Like its southern neighbour Peacock, Ankaa takes its name from the name of the constellation.

Ankaa was historically also known as Nair al Zaurak, from the Arabic nayyir az-zawraq, meaning “the bright (star) of the skiff.” The name referred to a medieval Arabic constellation known as the Dhow. The Latin equivalent was Cymbae, meaning “skiff,” taken from the phrase lucida cumbae. The name Zaurak now formally applies to the red giant Gamma Eridani in the constellation Eridanus.

Ankaa lies in the region of the sky between the brighter Achernar (mag. 0.40 – 0.46) and Fomalhaut (mag. 1.16). It can be seen just east of the imaginary line connecting the two stars, opposite Peacock (mag. 1.94), which forms a large triangle with Achernar and Fomalhaut. 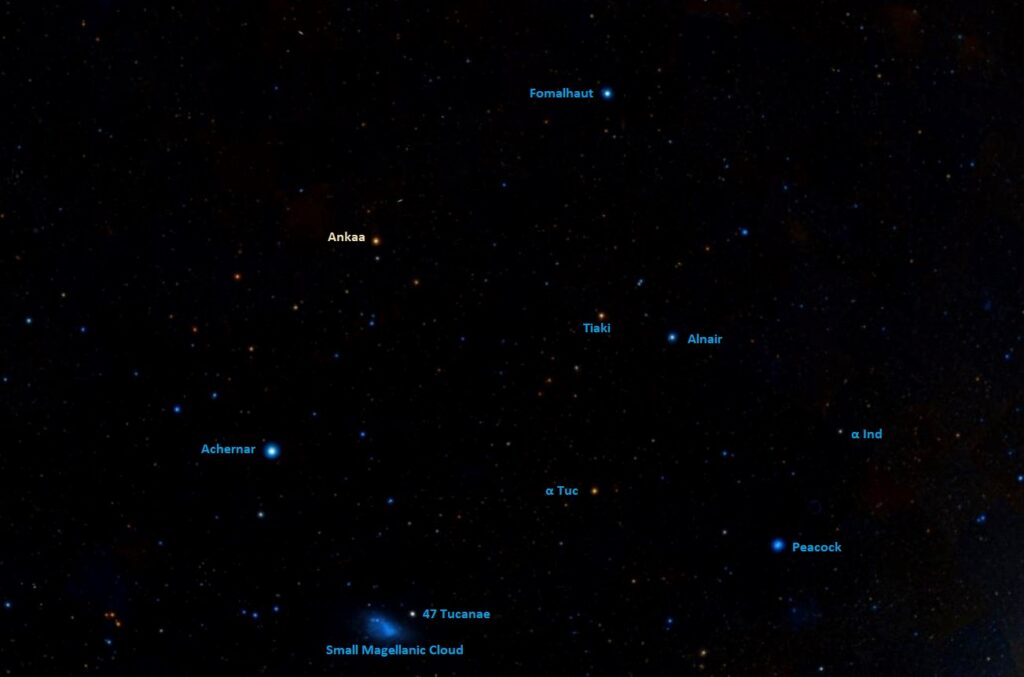 Ankaa can be used to find two bright galaxies that appear in the vicinity of the star. The spiral galaxy NGC 300 has an apparent magnitude of 9.0 and appears northeast of Ankaa. The Magellanic-type barred spiral galaxy NGC 55, also known as the Whale Galaxy, is brighter at magnitude 7.87 and appears northwest of Ankaa. Both galaxies lie in the neighbouring constellation Sculptor. 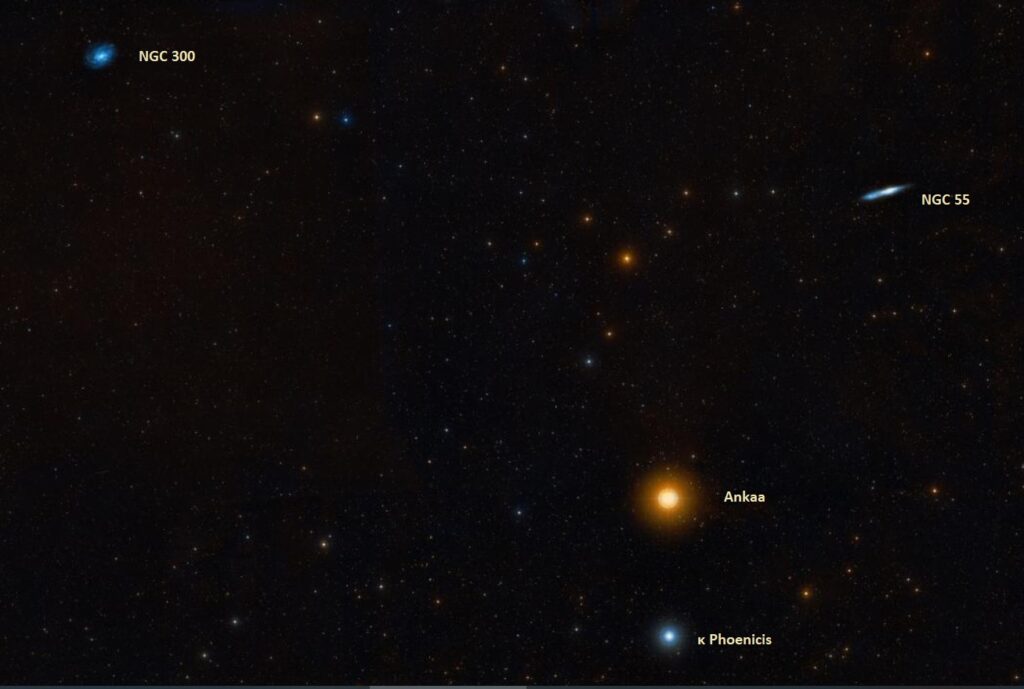 Ankaa is located in the constellation Phoenix. Representing the mythical fire bird, Phoenix belongs to the Bayer family of constellations, a group of 11 southern constellations that were first depicted in German astronomer Johann Bayer’s star atlas Uranometria of 1603. Located in the far southern sky, these constellations were mostly unknown to European observers before the Age of Discovery. They were created by Petrus Plancius, a Dutch-Flemish astronomer, in the late 16th century based on accounts of Dutch explorers who had sailed south of the equator. Other than Phoenix and Indus, the constellations represent the exotic animals that the explorers saw on their journeys in the southern hemisphere. Phoenix is not particularly large. It is the 37th constellation in size, stretching across 469 square degrees of the sky. It contains a number of interesting stars, among them the short-period pulsating variable SX Phoenicis, a prototype for its own class of variable stars, the Population II star HE0107-5240, one of the oldest stars known, with an estimated age of 13 billion years, and the Algol variable Zeta Phoenicis A (Wurren).

Notable deep sky objects in Phoenix include the compact galaxy group known as Robert’s Quartet, a group of four interacting galaxies (NGC 87, NGC 88, NGC 89 and NGC 92) located about 160 million light years away, the dwarf barred spiral galaxy NGC 625, one of the galaxies in the Sculptor Group, the Phoenix Cluster, one of the most massive galaxy clusters ever discovered, El Gordo, the largest distant cluster of galaxies known, located at a distance of more than 7 billion light years, and HLX-1 (Hyper-Luminous X-ray source 1), an intermediate-mass black hole candidate at the centre of the lenticular galaxy ESO 243-49.

The best time of year to observe the stars and deep sky objects in Phoenix is during the month of November. The entire constellation is visible from locations between the latitudes 32° N and 80° S.