Saiph, Kappa Orionis (κ Ori), is a blue-white supergiant marking the southeast corner, or the right knee, of Orion. Together with the brighter Rigel, Betelgeuse and Bellatrix, it outlines Orion’s familiar hourglass pattern. With an apparent magnitude of 2.09, Saiph is the sixth brightest star in Orion, slightly fainter than Orion’s Belt stars Alnitak and Alnilam, but outshining Mintaka. At an approximate distance of 650 light years from Earth, it lies slightly closer to us than Betelgeuse and Rigel, considerably closer than the Belt stars, and much further away than Bellatrix.

Saiph has the stellar classification B0.5 Ia, indicating a luminous supergiant star, bluish-white in colour. With an estimated temperature of 26,500 K, it is 56,881 times more luminous than the Sun. Even though it is much hotter than the constellation’s brightest star, Rigel, Saiph appears dimmer because, due to its high temperature, it emits much of its light in invisible ultraviolet wavelengths.

Based on the parallax determined by the Hipparcos satellite, Saiph has about 15.50 solar masses and a radius 22.2 times that of the Sun. Its estimated age is 11.1 million years. However, a more recent study of the age and spectra of stars in the Orion OB1 association gave a mass of 28 solar masses, from an initial mass 31.8 times that of the Sun, and a younger age, only 6.2 million years. Saiph is a relatively young star, but has evolved from the main sequence rapidly and already stopped fusing hydrogen in its core because of its high mass. It has a strong stellar wind that is causing it to lose a solar mass every 1.1 million years. The star will eventually expand into a red supergiant and end its life cycle like many of its bright neighbours in Orion, in a bright supernova event.

Saiph orbits the galactic core at a distance between 24,000 and 26,000 light years. It made its closest approach to the Sun millions of years ago, when it was a very young star, coming within 56 light years.

Saiph is a suspected variable star, showing slight variations in brightness of 0.04 magnitudes.

The Wardaman people of the Northern Territory of Australia associate Saiph with the myth of the Black-headed Python (Walijabi) creating a canyon with a Guman digging stick.

The name Saiph (pronunciation: /ˈseɪf/) comes from the Arabic phrase saif al jabbar, meaning “the sword of the giant.” It is the star’s traditional name, even if Saiph is not a part of Orion’s Sword. The name was originally used for Eta Orionis, a multiple star located near Mintaka in the direction of Rigel.

The name was approved for Kappa Orionis by the International Astronomical Union’s (IAU) Working Group on Star Names (WGSN) on July 20, 2016.

The Chinese know Saiph as 參宿六 (Shēn Sù liù), or the Sixth Star of Three Stars. Three Stars (參宿) is a Chinese asterism that originally consisted only of Orion’s Belt stars Alnitak, Alnilam and Mintaka, but was later expanded to also include other bright stars of Orion: Betelgeuse, Bellatrix, Rigel and Saiph. The name of the asterism did not change even though it consists of more than three stars.

The Egyptian astronomer Al Achsasi al Mouakket listed the star as Rekbah al Jauza al Yemeniat in his Calendarium, written in the 17th century, and the name was later translated into Latin as Genu Dextrum Gigantis. It means “the right knee of the giant,” referring to Saiph’s position in Orion.

Saiph is very easy to find because it one of the seven stars that form Orion‘s hourglass asterism. From northern latitudes, it appears at the lower left corner of Orion and, to observers south of the equator, it is the star at the upper left corner. 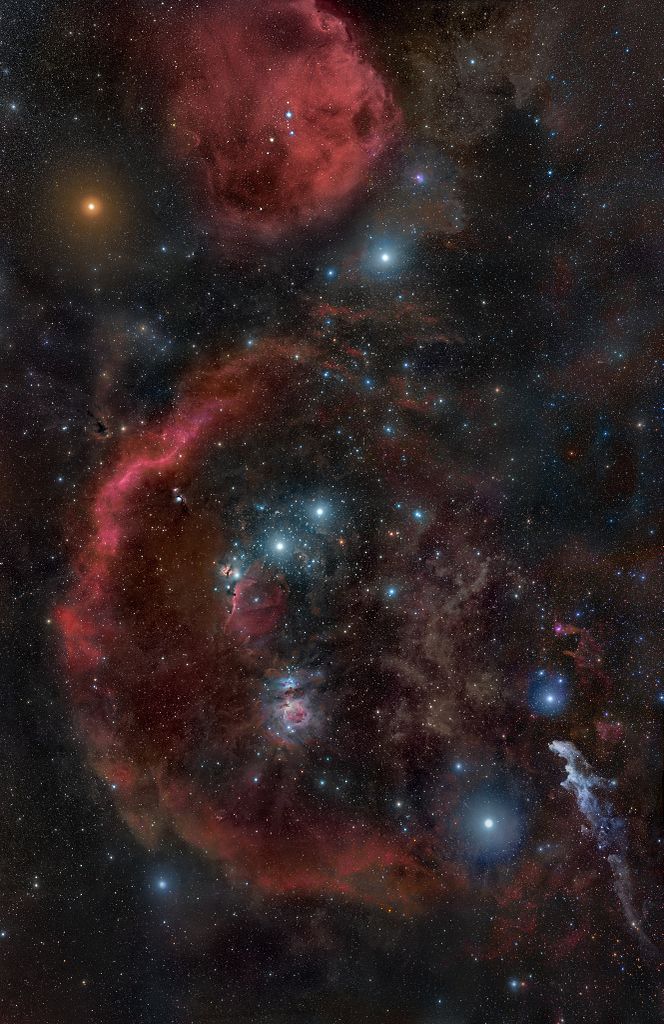 Photo taken by Rogelio Bernal Andreo in October 2010 of the Orion constellation showing the surrounding nebulae of the Orion Molecular Cloud Complex. Also captured is the red supergiant Betelgeuse (top left) and the famous Belt of Orion composed of the OB stars Alnitak, Alnilam and Mintaka. Rigel can be found at the bottom right. The red crescent shape is Barnard’s Loop. Image: Rogelio Bernal Andreo (CC BY-SA 3.0)

Saiph is located just under Orion’s Belt, one of the most recognizable asterisms in the sky, and in the vicinity of several famous deep sky objects. The Orion Nebula (Messier 42), the nearest region of massive star formation to the Sun, and De Mairan’s Nebula (Messier 43), separated from M42 by a dust lane, appear as the middle star of Orion’s Sword and form a triangle with Saiph and Rigel. The emission nebula Sharpless 276 (Sh2-276), also known as Barnard’s Loop, stretches across 600 arcminutes from the area north of Orion’s Belt, looping around the Belt stars in the direction of Saiph. The open cluster NGC 1980, surrounded by an emission nebula, can be seen just below M42 and M43. Hatysa (Iota Orionis) is a member of the cluster. 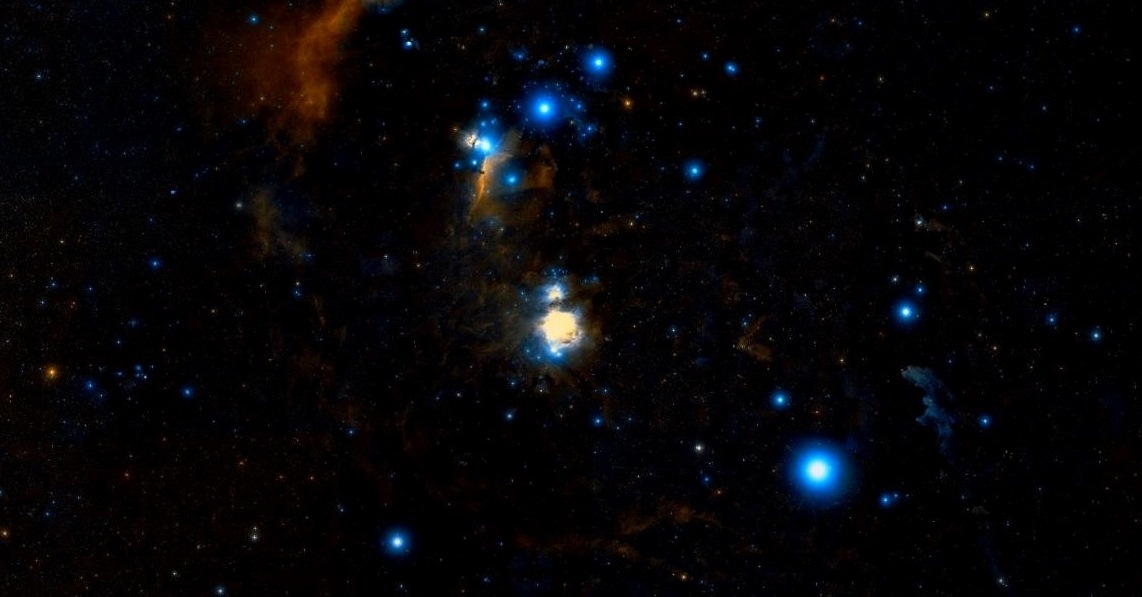 Saiph is located in the constellation Orion. Representing the mythical Hunter, the constellation is known for being the home to two of the 10 brightest stars in the sky – Rigel and Betelgeuse, as well as to the Belt of Orion, formed by the bright Alnitak, Alnilam and Mintaka.

The best time of year to see the stars and deep sky objects in Orion is during the month of January, when the constellation dominates the evening sky. For observers in northern latitudes, Orion stays conspicuous in the evening sky throughout the winter months.