Hadar, Beta Centauri (β Cen), is a triple star system located in the southern constellation Centaurus. With an apparent magnitude of 0.61, it is the second brightest point of light in Centaurus, after the Alpha Centauri system. Hadar lies at an approximate distance of 390 light years from Earth. Also known by its other traditional name, Agena, it marks the left knee of the celestial Centaur. Together with Alpha Centauri, it points the way to the Southern Cross and can be used to find the south celestial pole. This is why Alpha and Beta Centauri are known as the Southern Pointers.

On average, Hadar is the 11th brightest star in the sky. It is only slightly fainter than Procyon in the constellation Canis Minor, Achernar in Eridanus and Betelgeuse in Orion, and it outshines Altair in Aquila, Acrux in the neighbouring Crux and Aldebaran in Taurus. Earlier estimates of the masses of Beta Centauri Aa and Ab gave values of about 14.7 solar mases. If the higher values are accurate, both stars may end their lives as brilliant supernovae. If they are not quite as massive, they may instead meet their ends as massive white dwarfs.

The main pair, Beta Centauri Aa and Ab, orbit each other with a period of 356.94 days and an eccentricity of 0.8245, while the orbital period of Beta Centauri A and B is much longer, 288.267 years. Beta Centauri B is considerably fainter than the main pair, but with an apparent magnitude of 4, it would be visible to the unaided eye if it were a single star and not washed out by the glare of its brighter neighbours. It is separated by 1.3 arcseconds from Beta Centauri A.

Both Beta Centauri Aa and Ab are classified as Beta Cephei variables. Their brightness changes by up to a few hundredths of a magnitude and they have multiple pulsation periods of only a few hours. Beta Cephei stars are typically blue-white class B stars that show small rapid brightness variations in the range from 0.01 to 0.03 magnitudes with periods of 2.4 – 7.2 hours due to pulsations of their surfaces. Many other relatively bright stars are members of this group, including Mimosa (Beta Crucis), Imai (Delta Crucis), Shaula (Lambda Scorpii), Kappa Scorpii, Algenib (Gamma Pegasi), Alpha Lupi, Alpha Muscae, Mirzam (Beta Canis Majoris), Epsilon Centauri, Spica (Alpha Virginis), Epsilon Persei, Delta Ceti, and Theta Ophiuchi.

Hadar is one of the three Centaurus stars selected for use in navigation. The other two are Rigil Kentaurus (Alpha Centauri) and Menkent (Theta Centauri). The three stars are among 18 southern navigational stars with a declination between 30° S and 90° S. The group also includes Canopus, Miaplacidus and Avior in the constellation Carina, Acrux and Gacrux in Crux, Peacock in Pavo, Kaus Australis in Sagittarius, Shaula in Scorpius, Alnair in Grus, Fomalhaut in Piscis Austrinus, Achernar and Acamar in Eridanus, Ankaa in Phoenix, Atria in Triangulum Australe, and Suhail in Vela.

Even though it appears fainter than Alpha Centauri, Hadar is much more luminous, shining at first magnitude from a distance of 390 light years. Alpha Centauri, on the other hand, is the nearest star system to the Sun, located only 4.37 light years away. By the year 6,200, the high proper motion of Alpha Centauri will have taken the star close to Hadar’s current position. When this happens, the two stars will form a conjunction and appear like an exceptionally bright visual double star.

Beta Centauri B was discovered in 1935 by the Dutch astronomer Joan Voûte, who gave the companion the designation VOU 31. The separation between Beta Centauri A and B was 1.3 arcseconds in 1935 and has stayed the same since, but the position angle has changed six degrees.

Beta Centauri A was suspected to be a double-lined spectroscopic binary since 1967, when Michel Breger observed period variation in the star’s radial velocity using the 74-inch reflector at Radcliffe Observatory in Oxford. The binary nature of the primary component was confirmed spectroscopically in 2002 and interferometrically in 1974, 1999, and 2005. In 1999, the components Beta Centauri Aa and Ab were resolved with the MAPPIT interferometer and, in 2002, the parameters of the spectroscopic orbit were derived based on radial velocity curves of both stars, yielding an orbital period of 357 days. The stars were discovered to have similar masses, but one appeared to rotate much faster than the other.

Like other exceptionally bright stars, Hadar has played a prominent role in many cultures south of the equator. The Bushmen in South Africa knew Alpha and Beta Centauri as Two Men That Once Were Lions. The aboriginal Boorong people of northwest Victoria in Australia know the stars as Bermbermgle, two brothers known for their courage. The brothers helped do away with Tchingal, the Emu (represented by the Coalsack Nebula), who was eating people. The Wotjobaluk people have a similar legend and call the brothers Bram-bram-bult. 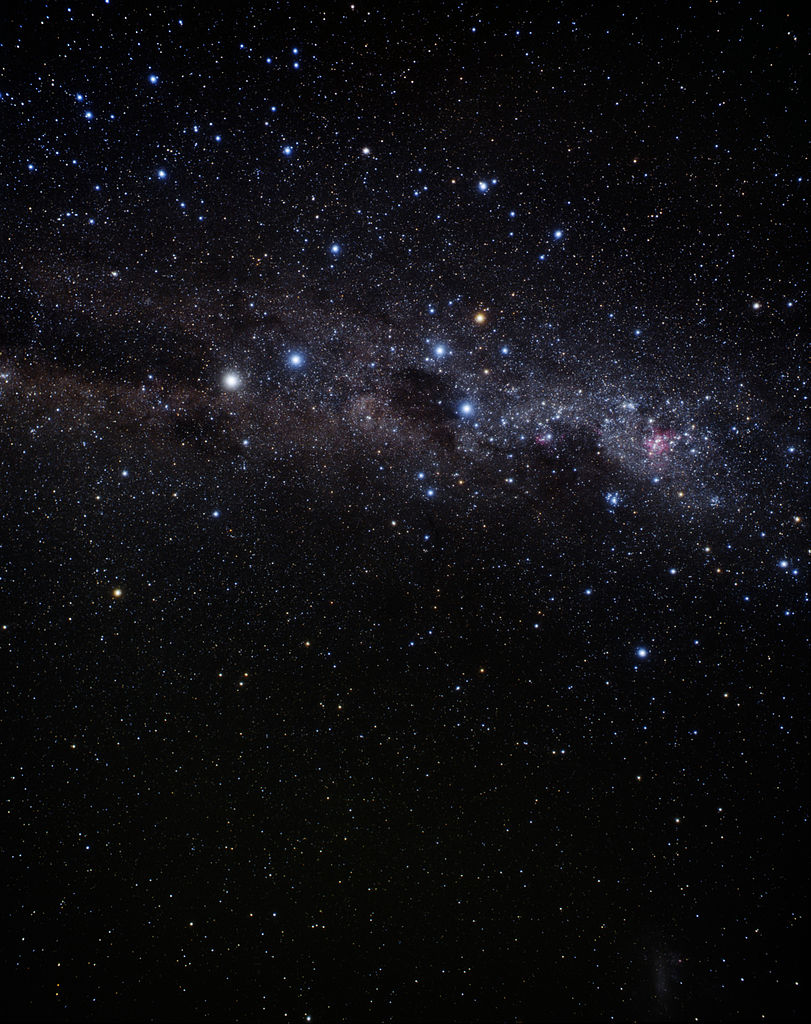 Alpha and Beta Centauri, the Coalsack Nebula and the Southern Cross, image: ESA/A. Fujii (CC BY 4.0)

The name Hadar (pronunciation: /ˈheɪdɑːr/) comes from the Arabic word whose root meaning is “settled area” or “on the ground,” possibly referring to the star appearing low above the horizon.

The name was officially approved by the International Astronomical Union’s (IAU) Working Group on Star Names (WGSN) on August 21, 2016. It formally applies only to the primary component, Beta Centauri Aa.

Beta Centauri has also been traditionally known as Agena (pronunciation: /əˈdʒiːnə/). The name is believed to be derived from the Latin genua, meaning “knees,” and to refer to the star’s position in the constellation, marking the left knee of Centaurus.

Hadar is very easy to find because it is exceptionally bright and located between Alpha Centauri, the third brightest star in the sky, and the Southern Cross, a conspicuous asterism formed by the Crux stars Acrux, Mimosa, Gacrux, Imai and Ginan. However, with the declination -60°22’, Hadar stays below the horizon for observers north of the latitude 30° N. 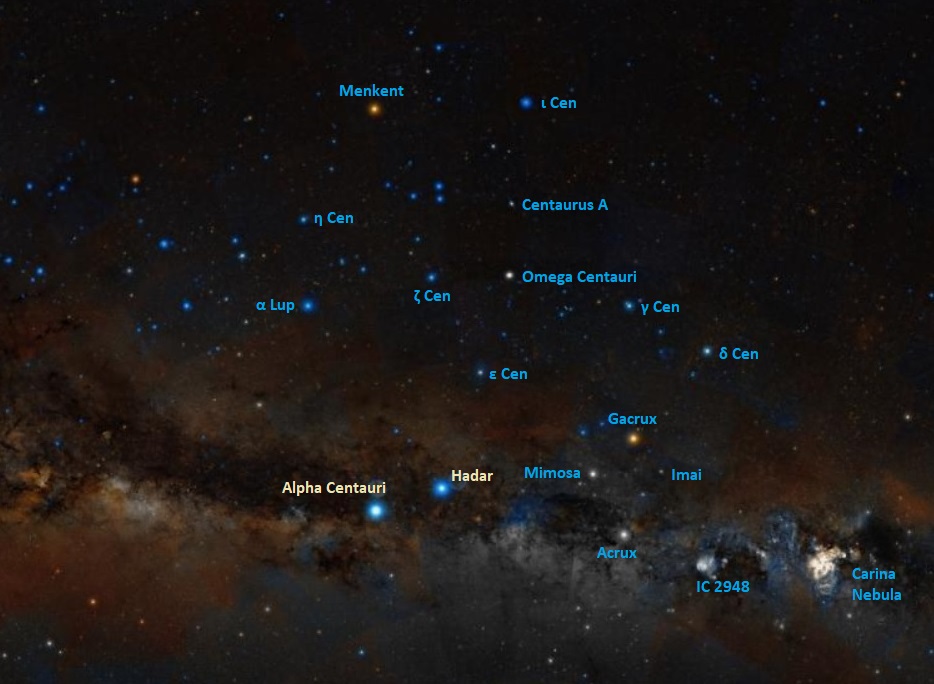 Hadar and Alpha Centauri are known as the Pointers, or Southern Pointers to distinguish them from Dubhe and Merak in Ursa Major, which point the way to Polaris and the north celestial pole. The two brightest Centaurus stars are commonly used to find the Southern Cross, which in turn is used to find the south celestial pole. Even though the Southern Cross is quite bright, with first-magnitude Acrux and Mimosa and second-magnitude Gacrux at its vertices, there are two similar asterisms in the southern sky – the False Cross and the Diamond Cross – that are sometimes mistaken for it, and Alpha and Beta Centauri can help identify the real thing. A line extended from Alpha through Beta Centauri leads in the direction of Gacrux, the top star of the Southern Cross. The south celestial pole lies roughly halfway between the Southern Cross and Achernar, the brightest star in Eridanus and the ninth brightest star in the sky.

Hadar and Alpha Centauri can be used to find two relatively bright open star clusters, NGC 5617 and Trumpler 22. The clusters are gravitationally bound and form a binary open cluster. They appear only a degree west-northwest of Alpha Centauri. The brighter of the pair, NGC 5617, has an apparent magnitude of 6.3 and lies 5,770 light years away.

Another bright open cluster, NGC 5316, can be found southwest of Hadar. It has an apparent magnitude of 6.0 and lies at a distance of 3,960 light years. 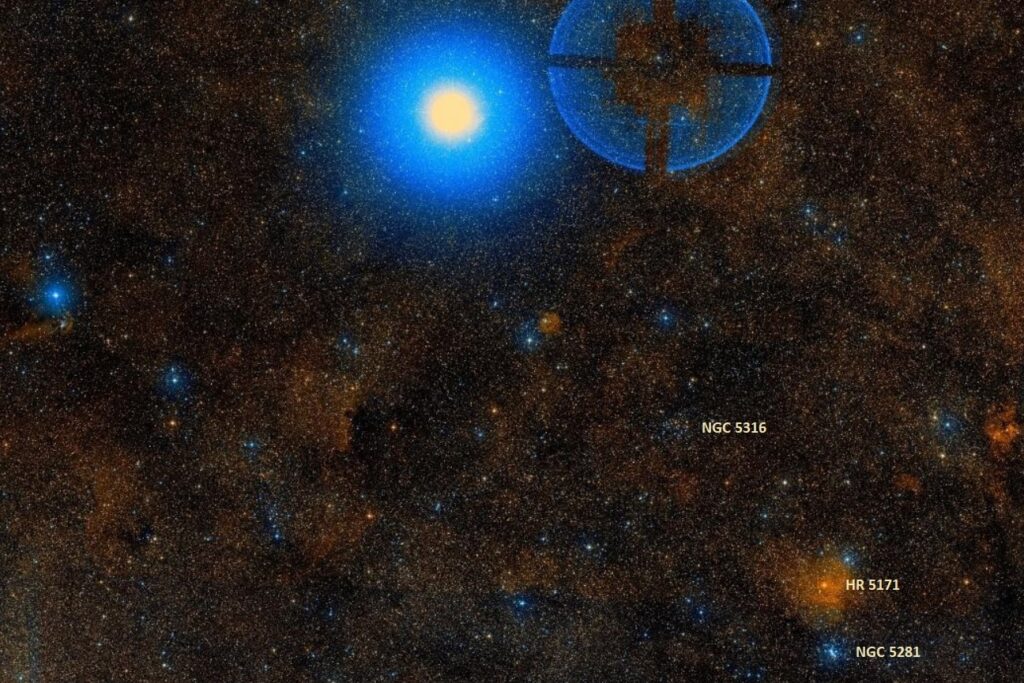 Hadar can also be used to find HR 5171 (V766 Centauri), a triple star system containing either a red supergiant or yellow hypergiant in an eclipsing binary system. With a radius over 1,000 times that of the Sun, the primary component is one of the largest stars known. It lies at an estimated distance of 4,900 to 11,700 light years and shines at magnitude 6.1 – 7.5.

The open cluster NGC 5281 lies in the same field of view as HR 5171, about three and a quarter degrees southwest of Hadar. It has an apparent magnitude of 5.9 and is located at a distance of 4,200 light years.

Hadar is located in the constellation Centaurus. Centaurus is the ninth largest constellation in the sky, stretching across an area of 1,060 square degrees. Representing a centaur in Greek mythology, it is one of the Greek constellations, first listed by the Greek astronomer Ptolemy in the 2nd century CE. With 10 stars brighter than magnitude 3.00, Centaurus is also one of the brightest constellations, but due to its location in the far southern sky, it is largely invisible to observers in mid-northern latitudes. For observers south of the equator, however, the constellation is circumpolar, i.e. it never sets below the horizon and can be seen throughout the year.

Centaurus is best known for its bright stars Alpha and Beta Centauri, the third and 11th brightest stars in the sky, the former of which is also the nearest star system to Earth. The constellation also contains V766 Centauri (HR 5171), one of the largest known stars.

Notable deep sky objects in Centaurus include Omega Centauri, the brightest, largest and most massive globular cluster known in our galaxy, Centaurus A, one of the brightest galaxies in the sky and one of the nearest radio galaxies to the solar system, the barred spiral galaxy NGC 4945, the unbarred spiral NGC 4622, also known as the Backward Galaxy, the polar-ring galaxy NGC 4650A, the dwarf starburst irregular galaxy NGC 5253, the elliptical galaxy NGC 4696, the brightest member of the Centaurus Cluster of galaxies, the Blue Planetary nebula (NGC 3918), nicknamed the Southerner, the protoplanetary Boomerang Nebula, and the bright open clusters NGC 3766 and NGC 5460.

The best time of year to observe the stars and deep sky objects of Centaurus is during the month of May, when the constellation is prominent in the evening sky. Centaurus can be seen in its entirety from locations between the latitudes 25° N and 90° S.