Mirach, Beta Andromedae (β And), is a red giant star located in the constellation Andromeda. With a mean apparent magnitude of 2.05, it is one of the two brightest stars in Andromeda, along with Alpheratz. It lies at a distance of 197 light years from Earth.

Mirach is a red giant star of the spectral type M0 III. It has a mass 3 to 4 times that of the Sun and has expanded to a size of 100 solar radii. If it were placed at the centre of our solar system, the star would extend to the orbit of Mercury. With an effective temperature of 3,842 K, it is 1,995 times more luminous than the Sun. Its projected rotational velocity is 7.2 km/s.

Mirach is not massive enough to go out as a supernova. Instead, it will meet its end as a white dwarf after it has cast off its outer layers into space.

Mirach is a suspected semiregular variable star. Its brightness varies from magnitude 2.01 to 2.10 and is reduced by 0.06 magnitudes by interstellar dust and gas.

The star has a faint companion, a low-mass 14th magnitude main sequence star at a minimum separation of 1,700 astronomical units.

Mirach is a spectral standard for its class, M0 III. Its spectrum has served as an anchor point for stellar classification since 1943.

Mirach (Beta Andromedae) and Alpheratz (Alpha Andromedae) have almost the same apparent magnitude. Different sources provide slightly different values and Alpheratz (mag. 2.06) is sometimes mentioned as the brightest star in the constellation, but as the brightness of Mirach varies from magnitude 2.01 to 2.10 and the value cited for Alpheratz is the combined apparent magnitude of the Alpha Andromedae binary star system, both stars have a claim to the title of Andromeda’s brightest star.

Mirach is also about as bright as Nunki in the constellation Sagittarius. The stars are slightly fainter than Hamal in Aries and Diphda in Cetus, and they just outshine Menkent in Centaurus, Saiph in Orion, Rasalhague in Ophiuchus, Kochab in Ursa Minor, and Algol in Perseus.

The name Mirach (pronunciation: /ˈmaɪræk/) has the same etymology as Mizar in Ursa Major. It is a corruption of the Arabic word mīzar, meaning “girdle,” and refers to the star’s position in the constellation Andromeda, at the princess’ left hip. The name has also been spelled Mirak, Mirath, Mirac, Mirar, and Merach. The variations come from the 1521 Alfonsine Tables, where the star was described as super mizar. The Arabic name comes from a Latin translation of Ptolemy’s Almagest.

The name was officially approved by the International Astronomical Union’s (IAU) Working Group on Star Names (WGSN) on June 30, 2016.

Mirach has been known by many different names across different cultures. Its Latin names include Cingulum (“belt” or “girdle”) and Ventrale (“belly”). Both names refer to the star’s former position in the constellation.

In Chinese astronomy, Mirach is one of the stars that form an asterism known as Legs and is known as 奎宿九 (Kuí Sù jiǔ), or the Ninth Star of Legs. The asterism is formed by several stars in the constellations Andromeda and Pisces.

In medieval Arabic astronomy, Mirach was known as Janb al-Musalsalah, meaning “the side of the chained lady.” It belonged to an Arabic lunar mansion known as Baṭn al-Ḥūt, meaning the Belly of the Fish, or Qalb al-Ḥūt, the Heart of the Fish. The Arabic fish did not correspond to the western “Northern Fish” of Pisces. In early Arabic astronomy, Mirach was known as Al Risha, meaning “the thread” or “the cord.” Today, the name Alrescha belongs to Alpha Piscium, a star located in the constellation Pisces.

Mirach is believed to be the star listed as KA.MUSH.I.KU.E, the Deleter, in the Babylonian compendium MUL.APIN.

In Micronesia, Mirach was known as Kyyw, the Porpoise. The star’s name was also the name of one of the months of the year.

Mirach is easy to find because it is located near a couple of prominent asterisms, Cassiopeia’s W and the Great Square of Pegasus. It is the middle star in the chain of three bright stars that begins with Alpheratz, the star at the northeast vertex of the Great Square, and ends with Almach near the border with Perseus constellation. 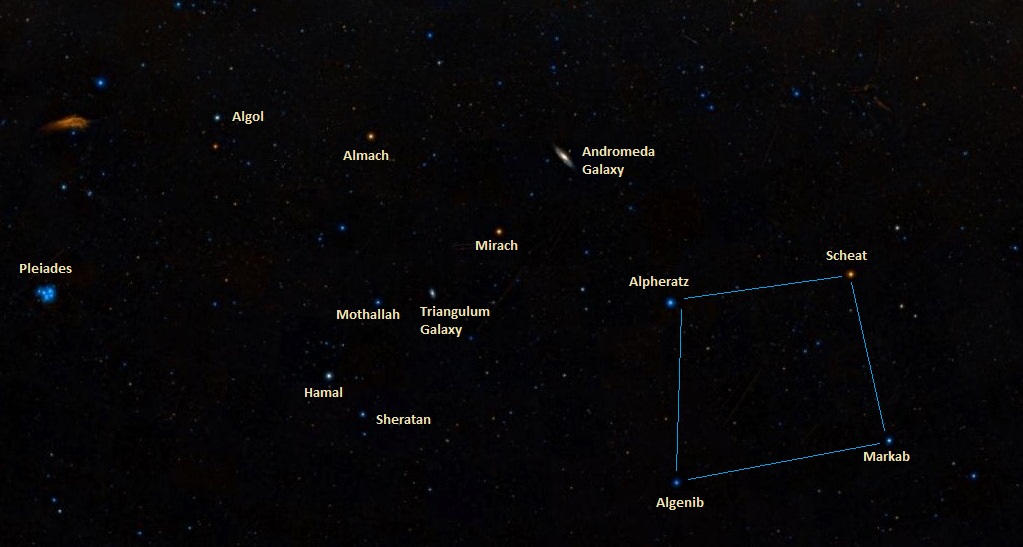 The famous spiral galaxies belong to the Local Group, the home of the Milky Way, and are our largest neighbours, as well as the most distant objects visible to the unaided eye. Andromeda has an apparent magnitude of 3.44 and appears as a small cloud in binoculars, while Triangulum is slightly fainter at magnitude 5.72 and has a much lower surface brightness, which makes it a challenging object in less than ideal conditions. Andromeda is located at a distance of 2.54 million light years from Earth and Triangulum lies 2.73 million light years away.

The dwarf lenticular galaxy NGC 404, nicknamed Mirach’s Ghost, lies in the same field of view as the star. The galaxy is located at an approximate distance of 10 million light years from Earth, beyond the Local Group. Even though it is relatively bright with an apparent magnitude of 11.2, Mirach’s Ghost is a challenging object to observe and photograph because it appears within 7 arcminutes of Mirach and is overwhelmed by the star’s light. 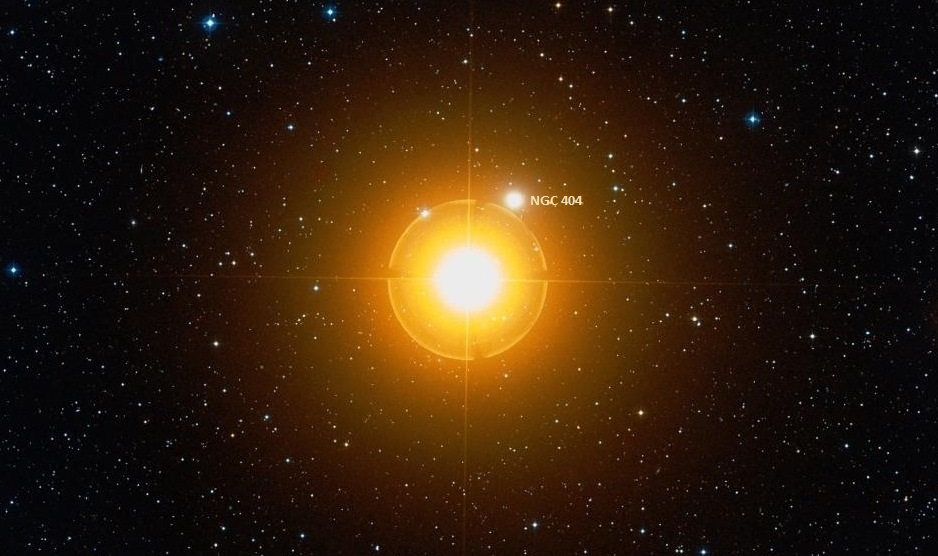 Mirach is located in the constellation Andromeda. Andromeda is the 19th largest of the 88 constellations and lies in the northern sky, in the vicinity of several other constellations associated with the myth of Andromeda: Cassiopeia, Cepheus, Perseus, Pegasus and Cetus. It is one of the 48 Greek constellations, first listed by the Greco-Roman astronomer Ptolemy in the 2nd century CE. The best time of year to observe the stars and deep sky objects in Andromeda is during the month of November.