Mintaka, Delta Orionis (δ Ori), is the westernmost star of Orion’s Belt. It is a multiple star system with a combined visual magnitude of 2.23, located at an approximate distance of 1,200 light years from Earth. Mintaka is the seventh brightest star in Orion and the 73rd brightest star in the sky. It is the faintest of the stars that form Orion’s familiar hourglass shape, but only slightly dimmer than Saiph, the bright supergiant star that marks the Hunter’s right knee.

Mintaka consists of several components. Mintaka A, the primary one, is itself a triple star, composed of three blue stars: a class O bright giant, a class B star still on the main sequence, and a class B subgiant. The first two stars, usually referred to as Mintaka Aa1 and Aa2 or Delta Orionis Aa1 and Aa2, orbit each other with a period of 5.73 days, causing slight variations in brightness as they eclipse each other during their orbit. Delta Orionis Aa is the closest massive eclipsing binary system to Earth and has been extensively studied by scientists as it helps them understand the properties and mechanics of such systems.

The subgiant star, Mintaka Ab, is separated by 0.26” from the main pair and orbits Mintaka Aa with a period of more than 400 years. The primary eclipse causes the magnitude to drop from 2.23 to 2.35, while the secondary one makes it drop to 2.29. Mintaka B is a dim 14th magnitude star that may or may not be physically related to the other stars. Its properties are mostly uncertain.

Mintaka C, designated HD 36485 and sometimes referred to as B, is a main sequence star with the spectral classification B and an apparent magnitude of 6.85. It is in fact a spectroscopic binary system with a dim class A companion. The stars orbit each other every 30 days.

Mintaka, Alnilam and Alnitak form Orion’s Belt, one of the most recognizable asterisms in the night sky. Mintaka lies west of the two stars and is in fact slightly closer to Alnitak, the easternmost Belt star, than it is to Alnilam, the central star, because the latter is located at a much greater distance.

Orion’s Belt has been known since ancient times and the three stars were known by many names. In English-speaking countries, they are known as Jacob’s Rod, Peter’s Staff, the Yard-stick, the Three Marys, the Three Kings, and Our Lady’s Wand. Similarly, in South America and Portugal, their names include “Las Tres Marías” (Spanish) and “As Três Marias” (Portuguese). In Puerto Rico and the Philippines, they are associated with The Three Kings and called “Los Tres Reyes Magos.” 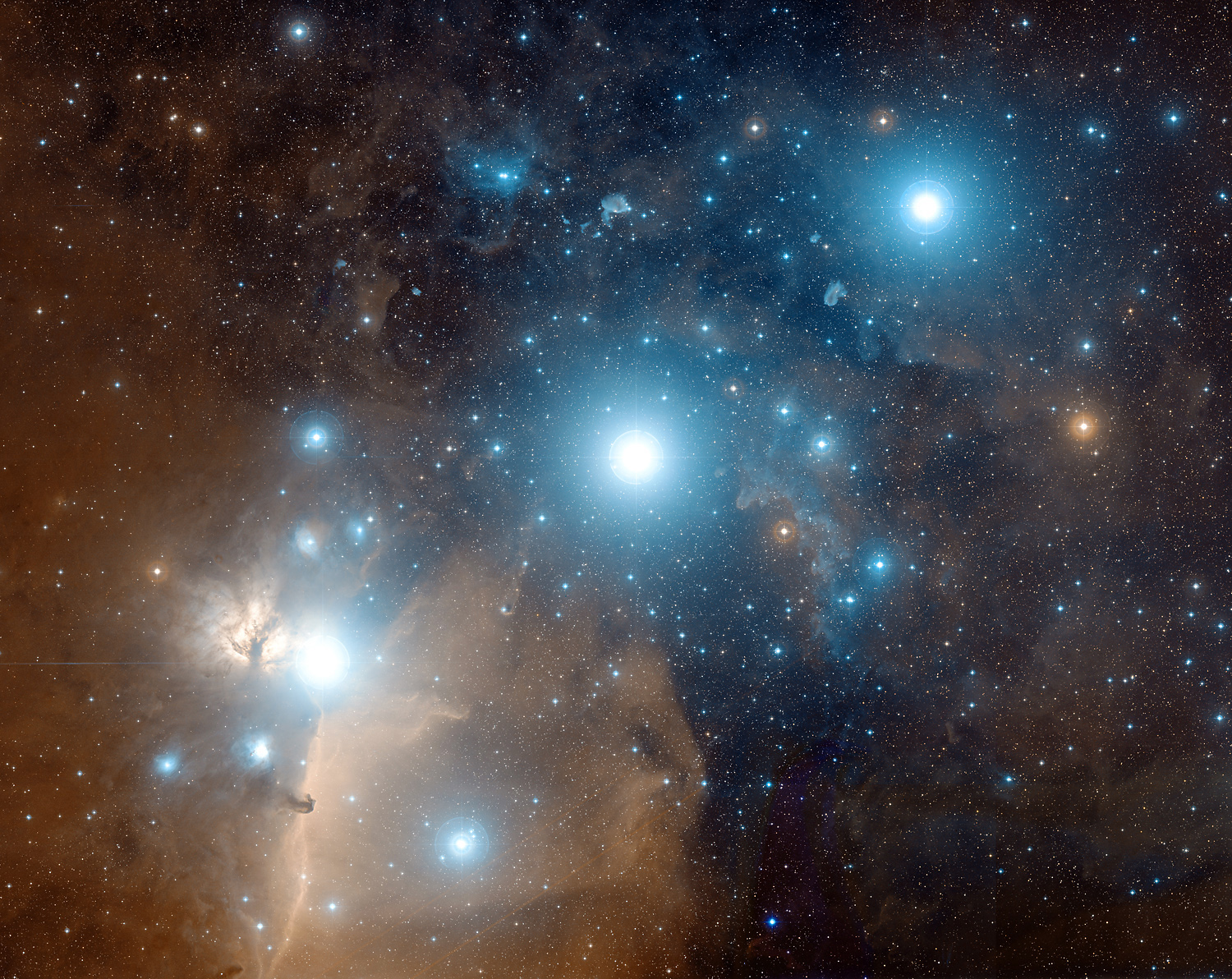 In the Arabic-speaking world, the stars’ names include Al Nijād (the Belt), Al Alkāt (the Golden Nuts) and Al Mīzān al Ḥaqq (the Accurate Scale Beam). In ancient Egyptian culture, Orion was associated with Osiris and the bright star Sirius with his wife. The controversial Orion correlation theory suggests that the three pyramids at Giza were arranged to represent Orion’s Belt.

The Chinese know the Belt stars as the Weighing Beam. The stars are also part of an asterism called Three Stars (參宿), which originally only consisted of the three stars of the Belt, but several other bright stars – Betelgeuse, Rigel, Bellatrix and Saiph – were added to it later. In reference to the asterism, Mintaka’s Chinese name is the Third Star of Three Stars (參宿三).

The stars of Orion’s Belt are best seen during the northern hemisphere winter/southern summer, especially in January around 9 pm. They reach the highest point in the sky on December 15.

In 1900, French astronomer Henri Alexandre Deslandres carried out radial velocity measurements at Paris Observatory and found that Mintaka had a variable radial velocity. This indicated that it was a spectroscopic binary star. Deslandres’ measurements led to an estimate of the system’s orbital period – 1.92 days – which was proven incorrect in 1904, when German astronomer and physicist Johannes Franz Hartmann showed that the period was in fact 5.7 days. Hartmann used photographic plates taken at Potsdam Observatory and his observations led to the first ever detection of the interstellar medium. While studying Mintaka’s spectroscopy, Hartmann noticed that most of the stellar spectrum had a shift due to the star’s orbital motion, with the exception of calcium lines. He theorized that this indicated the presence of a cloud that contained calcium in the line of sight to Mintaka.

Mintaka is the closest bright star (of all the first through third magnitude stars) to the celestial equator. It lies only a quarter of a degree to the south. The star’s proximity to the equator makes it an excellent guidepost for finding east and west. For observers at the equator, the star rises and sets in an almost exact east and west direction. It stays in the sky for almost exactly 12 hours. Being so close to the equator, it also shows where the northern and southern celestial hemispheres meet.

Like many other exceptionally bright stars, Mintaka has often been used and referenced in works of fiction. It was memorably used in the episodes “Who Watches the Watchers” of Star Trek: The Next Generation and “Durka Returns” of Farscape, in Piers Anthony’s Cluster series of novels, and in the Baten Kaitos video games.

The name Mintaka (pronunciation: /ˈmɪntəkə/, with stress on the first syllable) comes from the Arabic manṭaqa, meaning “belt.” It was approved for Delta Orionis Aa by the International Astronomical Union’s (IAU) Working Group on Star Names (WGSN) on July 20, 2016.

Mintaka is very easy to identify because it is part of Orion’s Belt and Orion‘s larger hourglass asterism, also formed by the bright Rigel, Betelgeuse, Bellatrix and Saiph. It is the western star of Orion’s Belt, appearing to the right of Alnilam and Alnitak to northern observers when Orion is near the meridian. The best time of year to observe Orion’s Belt stars is the northern hemisphere winter/southern summer, when Orion constellation rises highest in the sky. The constellation is visible in the evening from November to May and can be seen before dawn from late July to November. To southern observers, the hourglass shape appears upside down. 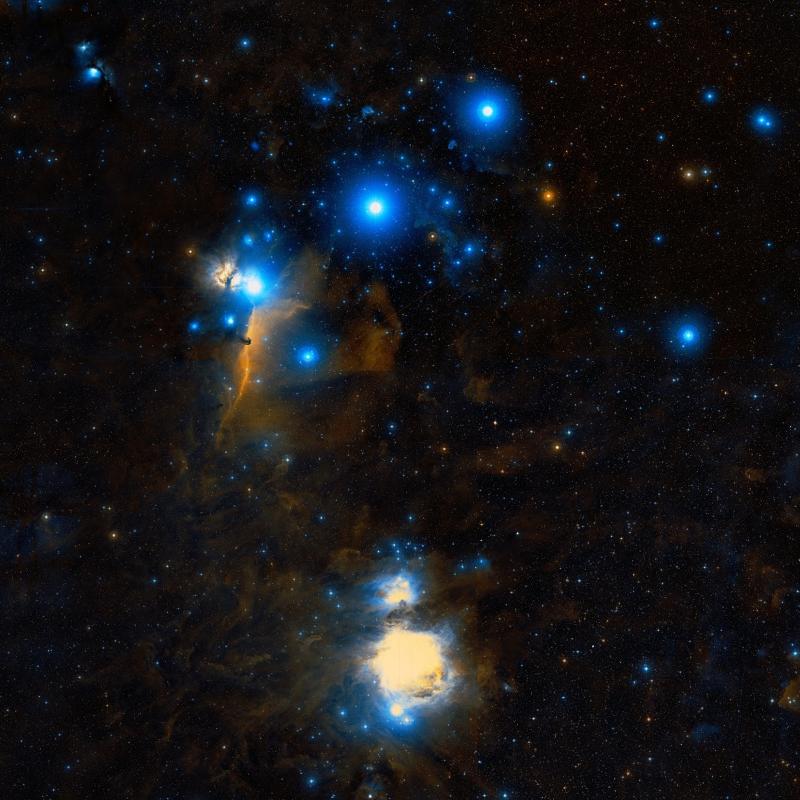 Mintaka is located in the constellation Orion, the Hunter. Known since prehistoric times, Orion is one of the most recognizable constellations in the sky. It is home to two first magnitude supergiants – Rigel and Betelgeuse – as well as to a number of notable deep sky objects. Most of these are portions of the immense star forming region known as the Orion Molecular Cloud Complex. They include the bright Orion Nebula (Messier 42) with the Trapezium Cluster, the neighbouring De Mairan’s Nebula (Messier 43), the reflection nebula Messier 78, and the emission nebulae Barnard’s Loop (Sharpless 276), the Flame Nebula (NGC 2024) and IC 434 with the dark Horsehead Nebula (Barnard 33).