Peacock, Alpha Pavonis (α Pav), is a spectroscopic binary star system located in the constellation Pavo, the Peacock, from which it takes the name. With an apparent magnitude of 1.94, it is the brightest star in Pavo. It lies at a distance of 179 light years from Earth.

Peacock has the stellar classification B3 V, indicating a hydrogen-fusing star still on the main sequence, appearing blue or bluish white in colour. Older sources give the spectral class B2 IV or B2.5 IV, indicating a subgiant. The star has a mass 5.91 times that of the Sun and a radius 4.83 times solar. With an effective temperature of 17,711 K, it shines with 2,200 solar luminosities, but most of its energy output is in the invisible ultraviolet. Visually, it is about 450 times more luminous than the Sun. The projected rotational velocity of Peacock is 16 km/s.

The star’s estimated age is 48 million years.  When it comes to the end of its life cycle, the star will expel its outer layers to form a planetary nebula and slowly fade away as a white dwarf.

Peacock has a fainter companion that has not been resolved. The Alpha Pavonis system is a spectroscopic binary star whose components orbit each other with a period of 11.753 days, indicating a separation of only about 0.21 astronomical units, which is about a fifth of the distance from Earth to the Sun. However, estimates based on orbital velocities give a separation of only 0.08 astronomical units. The companion has a mass of at least 0.26 solar masses but, since the stars have not been resolved, not much is known about it. A 1980 study of composite spectra of close visual binary stars estimated spectral classes of B0.5 and B2 for the two stars and a brightness difference of 1.3 magnitudes. Peacock is one of the 58 bright stars selected for navigation. It is the only navigational star in Pavo. It is one of 18 southern navigational stars with a declination between 30° S and 90° S. Other stars in this group include Ankaa in the constellation Phoenix, Achernar and Acamar in Eridanus, Canopus, Avior and Miaplacidus in Carina, Suhail in Vela, Shaula in Scorpius, Kaus Australis in Sagittarius, Fomalhaut in Piscis Austrinus, Acrux and Gacrux in Crux, Rigil Kentaurus, Hadar and Menkent in Centaurus, Alnair in Grus, and Atria in Triangulum Australe.

Alpha Pavonis is believed to be a member of the Tucana-Horologium moving group (Tuc-Hor), one of the largest stellar groups within 100 parsecs of the Sun, with an age of 45 ± 4 million years. The proximity and young age of the members make them potential targets for directly imaged exoplanets and circumstellar disks. The members of the association include the Beta Tucanae system, the variable binary star DS Tucanae, Eta Tucanae, Phi Eridani, Epsilon Hydri, and the fast-spinning flare star BO Microscopii. Peacock is the brightest member of the group.

A study published in 1988 found an unusually low abundance of deuterium (heavy hydrogen, produced in the Big Bang) in the star, with the ratio of deuterium to hydrogen measured at less than 5 x 10-6. This may be explained by the possibility that the star formed in an area with a very low abundance of the element. However, it is also possible that deuterium was burned in the star’s atmosphere during an earlier phase, before the main sequence. In either case, the finding implies that deuterium is burned at a faster rate in the Milky Way than previously believed.

The name Peacock (pronunciation: /ˈpiːkɒk/) is one of the few English star names. It comes from the name of the constellation Pavo, which means “peacock” in Latin. It was given to the star by Her Majesty’s Nautical Almanac Office (HMNAO) in the 1930s, before the publication of the Air Almanac, a navigational almanac created for use by the Royal Air Force (RAF). The almanac included 58 bright stars selected for use in navigation and Alpha Pavonis was one of the two navigational stars that did not have a traditional name at the time. The other one was Epsilon Carinae, which was given the name Avior.

The name Peacock was approved by the International Astronomical Union’s (IAU) Working Group on Star Names (WGSN) on July 20, 2016. It formally applies only to the component Alpha Pavonis Aa.

Peacock lies in the southern sky, near the border with the faint constellation Telescopium, and cannot be seen from locations north of the latitude 32° N. Southern observers can find the star by extending a line from Hadar, Beta Centauri, through Atria, Alpha Trianguli Australis. Peacock forms a large triangle with fellow southern luminaries Fomalhaut, Alpha Piscis Austrini, and Achernar, Alpha Eridani. Hadar is easy to identify because it is one of the Southern Pointers, along with Alpha Centauri. It is the 11th brightest star in the sky, while Alpha Centauri is the third. Atria is the brightest star of the Southern Triangle (Triangulum Australe), located in the same area of the sky as Alpha and Beta Centauri. 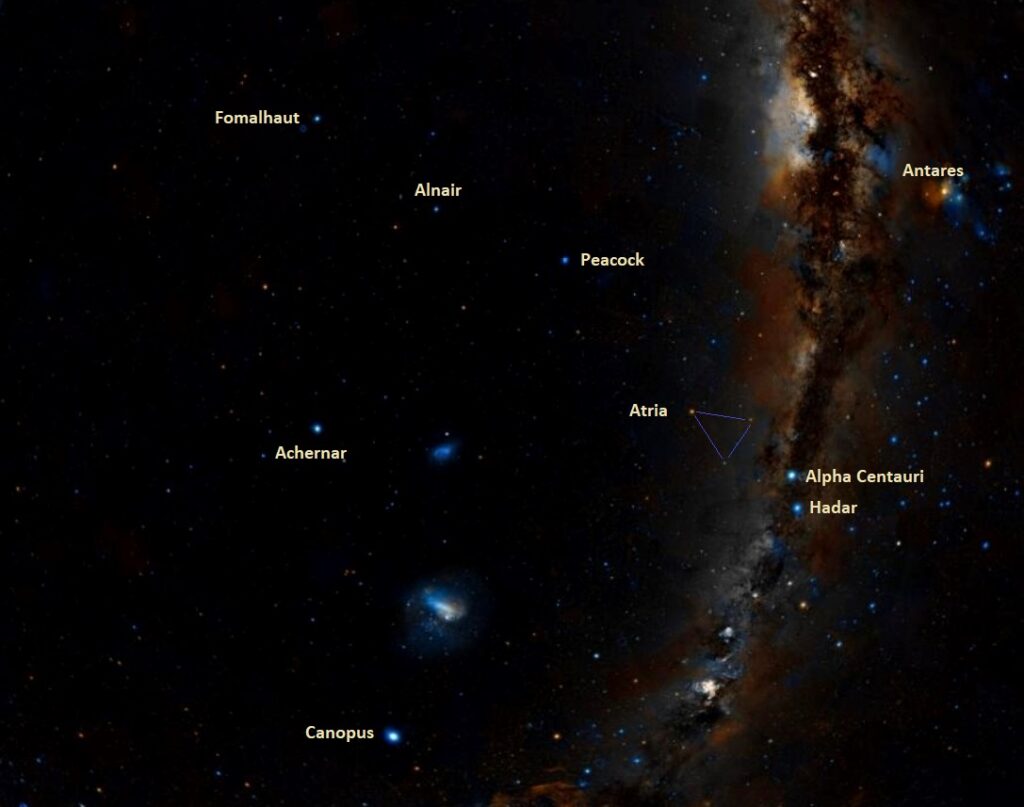 Peacock can be used to find NGC 6752, a bright, large globular cluster nicknamed the Great Peacock Globular. With an apparent magnitude of 5.4, NGC 6752 is the fourth brightest globular cluster in the sky, after Omega Centauri (mag. 3.9) in Centaurus, 47 Tucanae (mag. 4.09) in Tucana, and Messier 22 (mag. 5.1) in Sagittarius. The cluster lies 3.25 degrees south and 9.25 degrees west of Peacock.

A fainter spiral galaxy, IC 5012, lies in the same field of view as the star. 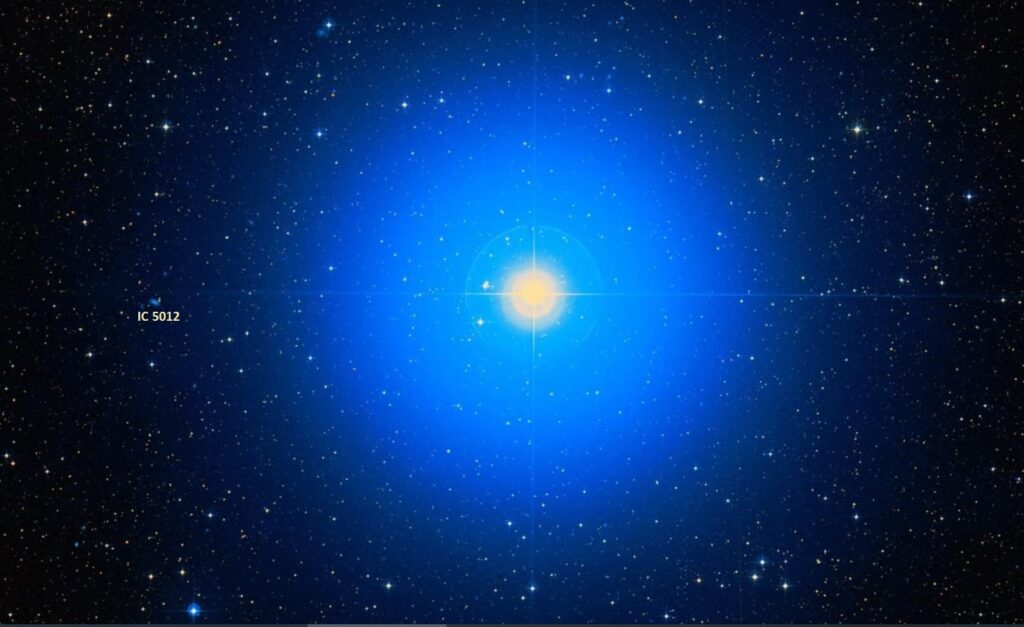 Peacock is located in the constellation Pavo. Pavo is one of the smaller constellations, the 44th in size out of 88, occupying an area of 378 square degrees of the southern sky. It belongs to the Bayer family of constellations, a group of 11 southern constellations created by the Dutch-Flemish astronomer Petrus Plancius in the 16th century, first depicted in the German astronomer Johann Bayer’s celestial atlas Uranometria (1603). These constellations were invisible to Greek observers and their stars unknown in Europe before the Age of Discovery. They are named after the exotic animals seen by Dutch explorers on their journeys south of the equator. Several constellations in this group – Pavo (the Peacock), Grus (the Crane), Phoenix (the Phoenix), and Tucana (the Toucan) – are collectively known as the Southern Birds. In addition to the globular cluster NGC 6752, Pavo contains several notable deep sky objects. These include the interacting galaxies NGC 6872 (the Condor Galaxy) and IC 4970, the spiral galaxies NGC 6744 and NGC 6810, the dwarf spheroidal galaxy Bedin I, and the irregular galaxy IC 4662.

The constellation is also home to the yellow subgiant Delta Pavonis, one of the nearest bright stars to the Sun. Located at a distance of 19.92 light years, Delta Pavonis is also one of the nearest solar-type stars to the Sun. It was once identified as the “Best SETI [search for extraterrestrial intelligence] target” among the 100 nearest G-type stars.

The best time of year to observe the stars and deep sky objects in Pavo is during the month of August. The constellation is visible in its entirety between the latitudes 30° N and 90° S.