Achernar, Alpha Eridani (α Eri), is a class B hydrogen-fusing dwarf located in the constellation Eridanus. Its estimated luminosity is 3,150 times that of the Sun. The star lies at a distance of 139 light years from Earth and, with an apparent magnitude that varies between 0.40 and 0.46, it is one of the 22 first magnitude stars (the brightest stars in the sky, whose apparent magnitude is lower than 1.50).

Achernar is the brightest star in Eridanus and the 9th brightest star in the sky. It is only slightly fainter than Procyon in Canis Minor and a little brighter (most of the time) than Betelgeuse in Orion and Hadar in Centaurus.

Achernar is notable both for its brightness and for its shape, which resembles a spinning top more than it does a perfect sphere. The unusually oblate shape is a result of the star’s high rotational velocity. At the time its shape was detected (2003), Achernar was the flattest star known.

Achernar is a main sequence star of the spectral type B6 Vep. It is the bluest of the ten brightest stars in the sky and has the highest temperature (about 15,000 K).

Alpha Eridani is in fact a binary star system consisting of Alpha Eridani A (formally named Achernar) and Alpha Eridani B. The companion is a smaller class A (white or bluish-white) main sequence star that orbits the primary component from a distance of about 12 astronomical units. Achernar B was given the spectral type A0V-A3V and its estimated mass is about twice that of the Sun. The two stars have an orbital period of at least 14-15 years.

The primary component has 6.7 times the Sun’s mass and a radius 7.3 by 11.4 times that of the Sun. It is the flattest (the least spherical) star known in the Milky Way. Its distorted shape may affect the orbital trajectory of the companion star.

Achernar is an exceptionally fast spinner, with a projected rotational velocity of 250 km/s. As a result, its shape has been distorted into an oblate spheroid and the star’s diameter at the equator is 56% greater than its diameter at the poles. This is common among rapidly rotating stars. Vega in the constellation Lyra, Altair in Aquila and Regulus in Leo are among the best known examples of the phenomenon.

Model view of Achernar, based on the profile measured with the VLTI. Two different models are shown: in “A”, the polar axis is inclined 50° to the line-of-sight; in “B”, this angle is 90°. Image: ESO

The high temperatures at the poles are creating a powerful polar wind which is expelling matter from the surface. As a result, a shell of hot gas forms at the poles. An extended disk of ionized gas surrounds the entire star, seen in the star’s excess emission in infrared wavelengths. Circumstellar disks are common in Be stars, hot stars with hydrogen and neutral helium in their optical spectra, many of which have circumstellar material. Achernar is the brightest Be star known, but it was not recognised as one until 1976. Like many stars in this class, it shows small, but regular variations in brightness and belongs to a class of variable stars known as Lambda Eridani variables.

Achernar’s temperature and radius are difficult to determine because the star is losing mass thousands of times faster than the Sun.

Achernar’s flattened shape was first observed by the European Southern Observatory’s Very Large Telescope (VLT) in 2003. The degree of flattening measured by the VLT Interferometer (VLTI) at the ESO Paranal Observatory was unprecedented at the time of discovery. Profile of the rapidly rotating star Achernar, as deduced from observations with the VLT Interferometer (VLTI). The size is indicated in units of 0.001 arcsec (milli-arcsec). Individual angular diameter measurements are indicated by pairs of small points with associated error bars on opposite sides of the centre. The fully drawn curve represents the best fitting ellipse. The ratio of the axes is 1.56 ± 0.05. The major axis of this ellipse is a measure of the “real” size of the star. Because of the projection effect, the minor axis shows the largest possible extension in the perpendicular direction. The axes ratio is therefore a minimal value; the star may be even more flattened than suggested by this ellipse. Image: ESO

In ancient times, Achernar was located even further south than it is today. Around 3400 BCE, its declination was 82°40’, placing it within 7.5 degrees of the south celestial pole. Around 1500 BCE, it was at declination -76, invisible to ancient Egyptians. By Ptolemy’s time (100 CE) it moved to declination -67 and was still invisible from Alexandria. Achernar is the only first-magnitude star not mentioned in Ptolemy’s Almagest.

Achernar remained unknown in the northern hemisphere until the age of discovery. The first star catalogue to include the star on the map of Eridanus is Johann Bayer’s Uranometria (1603). The German uranographer did not see the star himself, but based his depictions of the southern constellations on the observations of Dutch navigators Pieter Dirkszoon Keyser and Frederick de Houtman.

Achernar is the brighter of the two stars in the constellation Eridanus selected for use navigation. The other one is Acamar, Theta Eridani. The two are on the list of the 58 navigational stars, bright stars that have a special status in the field of celestial navigation because they are among the most recognizable stars in the sky. Achernar and Acamar are among the 18 southern navigational stars with a declination between 30° S and 90° S. Other stars in this group are Rigil Kentaurus, Hadar and Menkent in the constellation Centaurus, Fomalhaut in Piscis Austrinus, Canopus, Avior and Miaplacidus in Carina, Kaus Australis in Sagittarius, Alnair in Grus, Suhail in Vela, Atria in Triangulum Australe, Shaula in Scorpius, Ankaa in Phoenix, Peacock in Pavo, and Acrux and Gacrux in Crux.

Even if most northern observers will never see Achernar, many know the star from one of the many works of fiction in which it has been used or mentioned. Notable uses include M. A. R. Barker’s Tékumel novels and games, Jack Vance’s novel The Eyes of the Overworld (1966), Edmond Hamilton’s Star Wolf (1967-1968) trilogy, and Joe Haldeman’s novel Mindbridge (1976).

The name Achernar (pronunciation: /ˈeɪkərnɑːr/) comes from the Arabic phrase ākhir an-nahr, meaning “the end of the river.” The name was originally used for Theta Eridani, which now has the proper name Acamar, derived from the same phrase. Eridanus is one of the Greek constellations and, since the Greeks could not see Achernar, it was Acamar that marked the celestial river’s end.

The name was officially approved for Alpha Eridani A by the International Astronomical Union’s (IAU) Working Group on Star Names (WGSN) on June 30, 2016. It is informally used for the entire star system, but formally only applies to the primary component.

The Boorong people of northwest Victoria in Australia called the star Yerrerdetkurrk. Yerrerdetkurrk was the mother-in-law of Totyarguil, represented by the constellation Aquila, who never let him see her, heeding the local cultural taboo.

Achernar is located in the far southern sky and cannot be seen at all from locations north of latitude 33°N. It is circumpolar (it never sets) for observers south of latitude 33°S and can be seen throughout the year. It lies in the same region in sky as the somewhat fainter Alnair (Alpha Gruis), Ankaa (Alpha Phoenicis) and Alpha Tucanae, the brightest stars in the Southern Bird constellations Grus (the Crane), Phoenix and Tucana (the Toucan). 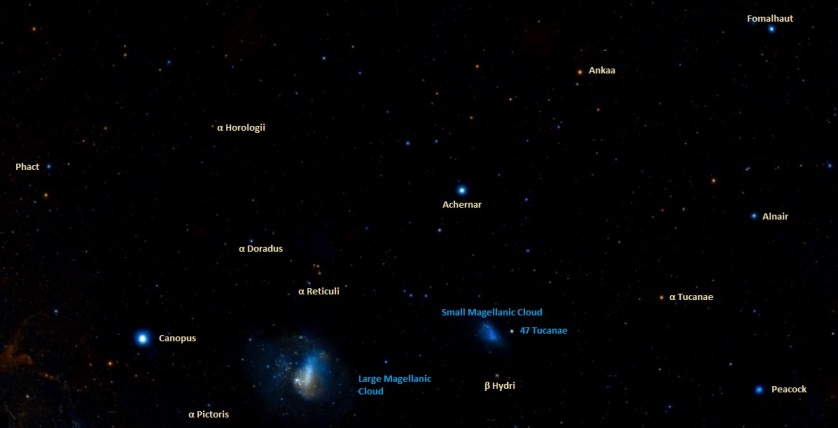 For observers south of latitude 33°N, Achernar is easy to find, both because it is very bright and because it lies in the same area of the sky as two bright galaxies, the Large and Small Magellanic Clouds.

Located in the constellations Dorado and Mensa, the Large Magellanic Cloud (LMC) is one of the closest galaxies to Earth and the fourth largest member of the Local Group, after the Andromeda Galaxy (M31), the Milky Way and the Triangulum Galaxy (M33). To observers south of latitude 20°N, the galaxy appears as a faint cloud. In perfect observing conditions, it covers an area more than 20 times the diameter of the full Moon. With an apparent magnitude of 0.9, it is one of the brightest astronomical objects in the sky.

The Large Magellanic Cloud forms a pair with the Small Magellanic Cloud (SMC), another bright Milky Way satellite. With a visual magnitude of 2.7, the smaller galaxy is also brighter than most visible stars, but as its brightness is spread over an area of 2.5 by 5 degrees, it is not as easy to spot as the LMC from light-polluted areas. The SMC is located about 15 degrees below Achernar, while the LMC lies about 20 degrees to the east of the SMC. 47 Tucanae, the second brightest globular cluster in the sky (after Omega Centauri) can be seen next to the Small Magellanic Cloud.

Achernar can be used to find the south celestial pole, which lies roughly halfway between the star and the Southern Cross, formed by the bright stars Acrux (Alpha Crucis), Mimosa (Beta Crucis), Gacrux (Gamma Crucis) and Imai (Delta Crucis).

The pole can also be located by drawing an imaginary equilateral triangle with Achernar and Canopus as two of the vertices. The third vertex of the triangle, located in the direction of the Southern Pointers (Alpha and Beta Centauri), is the south celestial pole. Another method is to draw a smaller triangle with the two Magellanic Clouds, also in the direction of the bright Alpha and Beta Centauri. The third corner will be the pole. Sigma Octantis (Polaris Australis), the star that marks true south, is the closest visible star to the south celestial pole, but as it is not very bright (at mag. 5.47, it is barely visible even on a clear night), nor is it part of any easily recognizable asterism, the stars of the Southern Cross are commonly used to find south instead. Eridanus is the sixth largest constellation in the sky. It contains several notable deep sky objects, including the reflection nebula IC 2118, also known as the Witch Head Nebula due to its striking appearance, the planetary nebula NGC 1535 (Cleopatra’s Eye Nebula), the grand design spiral galaxy NGC 1300, and the ring galaxy NGC 1291.

Eridanus is also home to Epsilon Eridani, known by the proper name Ran, the third nearest star or star system to the Sun (after Alpha Centauri and Sirius) that can be seen without binoculars. With a visual magnitude of 3.736, Epsilon Eridani is easily visible from most places on Earth. It is located halfway between the bright Rigel (Beta Orionis) and Mira (Omicron Ceti),

The best time of year to see the stars and deep sky objects in Eridanus is during the month of December, when the constellation is prominent in the evening sky.