Atria, Alpha Trianguli Australis (α TrA), is an orange giant or bright giant star located in the southern constellation Triangulum Australe. With an apparent magnitude of 1.91, it is the brightest star in the constellation. It lies at an approximate distance of 391 light years from Earth.

Atria has the stellar classification K2 IIb-IIIa, indicating a giant (III) or bright giant (II) star appearing orange in colour. The star has a mass of 7 solar masses and a radius 130 times that of the Sun. If it were placed at the centre of our solar system, it would extend between the orbits of Mercury and Venus. With a surface temperature of 4,150 K, Atria is 5,500 times more luminous than the Sun. Its estimated age is 48 million years.

Some sources give the spectral class K2III_Ba1 for Atria, which indicates a barium star. Barium stars are explained by the presence of a binary companion – an initially more massive star (a carbon star on the asymptotic giant branch) that evolved first and contaminated the surface layers of the other star when the latter was still on the main sequence. The AGB star would now be a white dwarf, but one has not yet been detected near Atria. A study published in 2007 presented evidence that Atria may have a companion. The star exhibits unusual characteristics for its class, including a strong X-ray emission and stellar flares, which could be explained by a magnetically active yellow dwarf companion with a hot corona. A survey with the Wide Field Planetary Camera 2 (WFPC2) on board the Hubble Space Telescope (HST) discovered a faint object 0.4’’ south of the star. The object may be a class G0 dwarf with a mass similar to that of the Sun at a separation of about 50 astronomical units from the primary and a minimum orbital period of 130 years. However, the evidence for the presence of the dwarf companion is inconclusive.

Atria forms a triangle with Beta Trianguli Australis and Gamma Trianguli Australis, which gives the constellation Triangulum Australe its name. Informally known as Betria and Gatria, Beta and Gamma Trianguli Australis are both white (class F1V and A1V) main sequence stars and stand in contrast to the orange Atria. Unlike the triangle formed by the stars of the northern constellation Triangulum, which is elongated, the Southern Triangle is more equilateral in shape and its stars noticeably brighter. Atria is by far the most distant and the most luminous of the three stars.

Atria is the 42nd brightest star in the sky. With an apparent magnitude of 1.91, it is only slightly fainter than Alkaid in the constellation Ursa Major, Sargas in Scorpius, Avior in Carina, and Menkalinan in Auriga, and it just outshines Alhena in Gemini, Peacock in Pavo, and Alsephina in Vela.

Atria is one of the 58 bright stars selected for navigation. Navigational stars have a special role in the field of celestial navigation because they are among the most recognizable stars in the sky, both because they are bright and because they are part or lie in the vicinity of a prominent asterism. Atria is one of the 18 southern navigational stars with a declination between 30° S and 90° S. The group also includes Suhail in the constellation Vela, Canopus, Miaplacidus and Avior in Carina, Achernar and Acamar in Eridanus, Ankaa in Phoenix, Alnair in Grus, Fomalhaut in Piscis Austrinus, Peacock in Pavo, Kaus Australis in Sagittarius, Shaula in Scorpius, Acrux and Gacrux in Crux, and Alpha Centauri, Hadar and Menkent in Centaurus.

The name Atria (pronunciation: /ˈeɪtriə/) is a contraction of the star’s Bayer designation, Alpha Trianguli Australis. It does not have a particular meaning. The name was officially approved by the International Astronomical Union’s (IAU) Working Group on Star Names (WGSN) on July 20, 2016.

Atria is easy to find because it is part of a conspicuous southern asterism – the Southern Triangle – that lies just east of two exceptionally bright stars, Rigil Kentaurus (Alpha Centauri) and Hadar (Beta Centauri). Atria lies on the opposite side to the Centaurus stars, near the border with the constellation Apus. 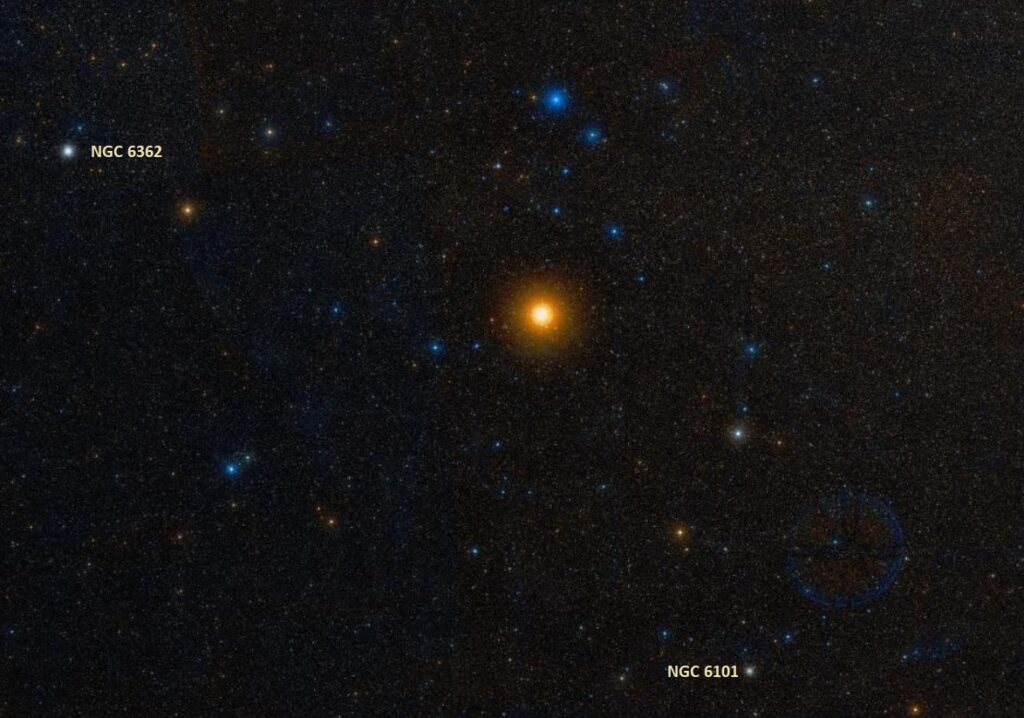 Atria is the luminary of Triangulum Australe, the Southern Triangle. Triangulum Australe is one the smallest constellations in the sky, 83rd in size (out of 88), occupying an area of only 110 square degrees. Even though it is small and has only three stars brighter than magnitude 3.00 – Alpha, Beta and Gamma Trianguli Australis – the constellation is easily recognizable because the three stars form a distinct triangle just east of the Southern Pointers, Alpha and Beta Centauri. Located in the third quadrant of the southern celestial hemisphere, Triangulum Australe is invisible to observers in mid-northern latitudes and can only be seen in its entirety between the latitudes 25° N and 90° S.

The best time of year to observe the stars and deep sky objects in Triangulum Australe is during the month of July, when the constellation is particularly prominent in the evening sky.