Acrux, Alpha Crucis (α Cru), is a multiple star system located in the constellation Crux. It is the brightest of the stars that form the Southern Cross, one of the best known asterisms in the southern sky. Acrux lies at a distance of 320 light years from Earth. With a combined apparent magnitude of 0.76, it is the 12th brightest star in the sky. It shares the 12th place with Altair in the northern constellation Aquila. The two stars are usually only slightly brighter than the variable Aldebaran (Alpha Tauri), Antares (Alpha Scorpii) and Spica (Alpha Virginis), but are outshined by Achernar (Alpha Eridani), Betelgeuse (Alpha Orionis) and Hadar (Beta Centauri).

Alpha Crucis may appear as a single star to the unaided eye, but it is in fact a multiple star system consisting of six components. Optical telescopes reveal three components in the system, with the brightest two separated by about 4 seconds of arc. These two components are designated Alpha1 Crucis and Alpha2 Crucis and commonly referred to as Acrux A and Acrux B. The third component, Acrux C, is also visible in small telescopes. It is more distant from the two brighter components, lying at a separation of 90 arcseconds from the main pair. Alpha1 Crucis is a spectroscopic binary system consisting of Alpha Crucis Aa, formally named Acrux, and Alpha Crucis Ab. The components are believed to have about 14 and 10 solar masses, which makes both stars supernova candidates. The two stars take 75.7794 days to complete an orbit and are separated by about 1 astronomical unit.

The third, more distant component has the designation HR 4729 in the Yale Bright Star Catalogue and HD 108250 in the Henry Draper Catalogue. With the stellar classification B5 V, it is a bluish main sequence star, cooler and less luminous that the main pair. Several studies have indicated that the star is in fact a subgiant. It has an apparent magnitude of 4.79, a mass 9.65 times that of the Sun, and a radius 5.5 times solar. It is a spectroscopic binary star, believed to be gravitationally bound to Acrux A and Acrux B because it shares their motion through space. The two components have an orbital period of 1 to 5 hours and a dim visual companion about 2.1’’ away. The estimated age of Acrux C is about 12 million years. The properties of the star’s spectroscopic companion are unknown, but it is believed to be more massive than the Sun.

There are several other fainter companions found up to a distance of 2 arcminutes. One of them has been designated Alpha Crucis D (or P) because it is separated by only 2’’ from Acrux C. It is a 15th magnitude star, likely of the spectral type M0 V.

Acrux is the brightest and southernmost star of the Southern Cross, one of the brightest asterisms in the night sky. Mostly invisible (and therefore unknown) to northern observers, the Southern Cross has a prominent role in many cultures south of the equator. It is represented on the flags of Australia, New Zealand, Brazil, Papua New Guinea and Samoa. On the flag of Brazil, Acrux represents São Paulo, the country’s most populous state. Acrux and Gacrux are among the 58 stars selected for navigation. Navigational stars have a special status in the field of celestial navigation because they are some of the brightest and most identifiable stars in the sky. They span 38 constellations and include 19 first-magnitude stars, 38 stars of the second magnitude, and Polaris, the North Star. The stars cover the area from the declination +89° to -70° of the celestial sphere. 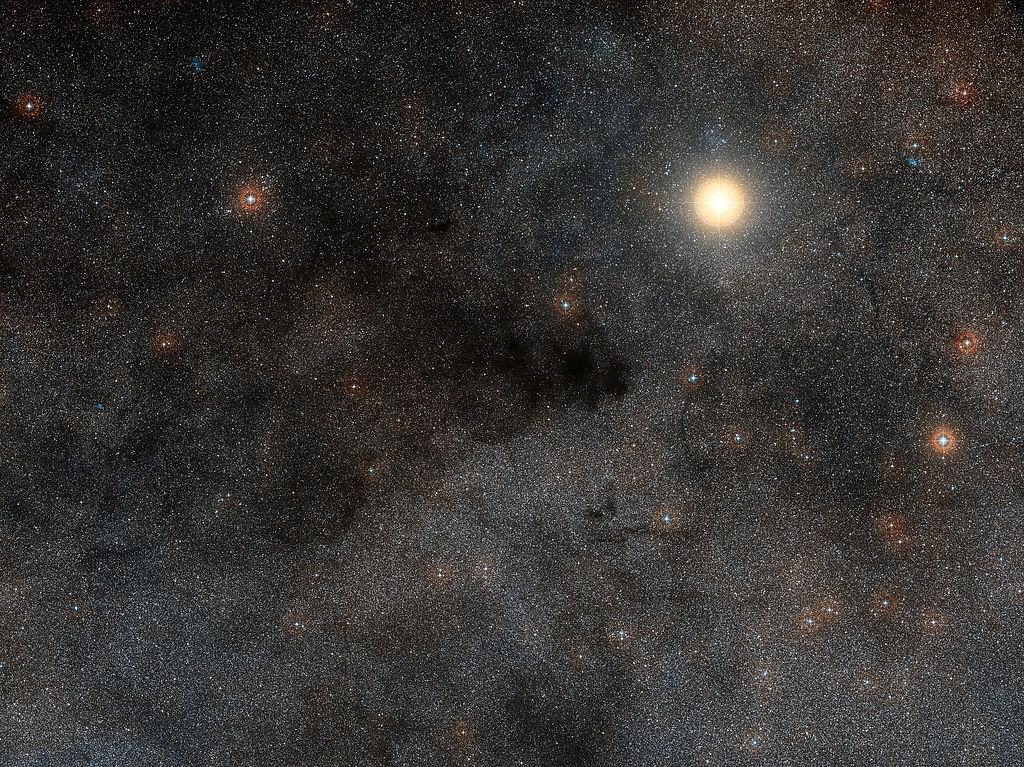 This rich landscape is part of the small constellation of Crux (The Southern Cross). The very bright star is Alpha Crucis, also know as Acrux, one of the four stars that make up the famous cross shape. Most of the upper left part of this image is filled with dark dusty clouds that form part of the huge dark nebula called the Coalsack. Image: ESO/Digitized Sky Survey 2. Acknowledgment: Davide De Martin

A 2011 study by A. C Rizzuto and colleagues suggested that Acrux was 66% likely to belong to the Lower Centaurus-Crux subgroup of the Scorpius-Centaurus Association, the nearest OB association to the solar system. Both Acrux and Mimosa have a similar age, position and parallax as the members of the Scorpius-Centaurus group and likely share a common origin with the group.

Acrux C (HR 4729) was first detected as a companion to Acrux by the Scottish astronomer James Dunlop from New South Wales in 1829. Acrux C was first suspected to be a binary star in 1916, but the orbit was only calculated in 1979.

Acrux was visible to most northern observers in ancient times. Due to the Earth’s axial precession, it has since shifted below the horizon. In ancient Greece and Rome, the stars of Crux were visible and considered part of Centaurus constellation. Acrux marked the Centaur’s right hind foot. In old Indian astronomy, the star was called Tri-shanku.

The name Acrux (pronunciation: /ˈeɪkrʌks/) is a contraction of the star’s Greek letter designation (Alpha) and the name of the constellation (Crux). It was coined by the 19th century American astronomy writer and cartographer Elijah Hinsdale Burritt. It formally applies only to the brightest component, Alpha Crucis Aa, but it commonly used for the entire star system and its other individual components.

The Portuguese know Acrux as the Star of Magellan (Estrela de Magalhães).

Acrux is at -63° declination, which makes the star invisible to most northern observers. It can be seen from any location south of latitude 27°N. North of the equator, it never rises very high above the southern horizon.

Acrux and the other stars of the Southern Cross are very easy to find because the asterism is quite prominent and recognizable, even though it does not quite look like a cross, and because it lies next to two exceptionally bright stars – Alpha and Beta Centauri. Known as the Southern Pointers, the bright Centaurus stars help observers find Crux, as well as true south. An imaginary line extended from Alpha through Beta Centauri leads to Gacrux, the top star of the Southern Cross.

Acrux and Gacrux are commonly used to find the south celestial pole, which lies about halfway between the Southern Cross and the bright Achernar in the constellation Eridanus. Sigma Octantis (Polaris Australis), currently the closest visible star to the pole, is quite faint and, at magnitude 5.47, cannot be seen from light-polluted areas. However, the pole can be located by drawing two imaginary lines from the Southern Cross and the Southern Pointers; one from Gacrux through Acrux and the other at a right angle to the line connecting Alpha and Beta Centauri. The point where the two lines meet is near the south celestial pole.

The stars of Crux are invisible north of the latitude 20° N, but they never set below the horizon for observers south of 34°S and can be seen throughout the year.

Acrux is located in the constellation Crux. Crux is the smallest of the 88 constellations, but also one of the most recognizable ones in the southern hemisphere.

In spite of its size, it contains a good number of interesting deep sky objects. The best known of these are the Jewel Box Cluster (NGC 4755), a magnitude 4.2 open cluster that lies a degree southwest of Mimosa (Beta Crucis), and the Coalsack Nebula, the most conspicuous dark nebula in the sky, located 3 degrees east of Acrux. The nebula stretches across an area of about 7 by 5 degrees and appears as a large patch in the Milky Way. The best time of year to see the stars and deep sky objects in Crux is during the month of May.