Deneb, Alpha Cygni (α Cyg), is a class A supergiant located at an approximate distance of 1,550 light years from Earth. With an average visual magnitude of 1.25, it is the brightest star in the constellation Cygnus and the 19th brightest star in the sky. It is only slightly fainter than Pollux in the constellation Gemini and Fomalhaut in Piscis Austrinus, and it just outshines Mimosa in Crux and Regulus in Leo.

Deneb is part of two large asterisms that dominate the evening sky during the northern hemisphere summer. The Summer Triangle, which it forms with two other first-magnitude stars, Vega and Altair, is the larger of the two and contains most of the Northern Cross, formed by the brightest stars in Cygnus. Deneb marks the tail of the celestial Swan and the top of the Northern Cross. The double star Albireo lies at the opposite end of the pole of the cross and marks the Swan’s beak.

Deneb is by far the most distant star of the Summer Triangle, but only the second in brightness, after Vega. The blue-white supergiant is the most luminous first magnitude star, with an estimated luminosity of up to 196,000 times that of the Sun and an absolute magnitude of -8.38. If it were placed at Vega‘s distance, it would be bright enough to cast shadows on Earth. However, even though different instruments and methods have been used to measure the star’s properties, they are still mostly uncertain, and some luminosity estimates are as low as 55,000 times solar. Deneb is a blue-white supergiant of the spectral type A2 Ia. It is 19 times more massive than the Sun and has expanded to a size of 203 solar radii. With an estimated temperature of 8,525 K, it is 196,000 times more luminous than the Sun. As a result of strong stellar winds, it loses about a millionth of a solar mass each year. 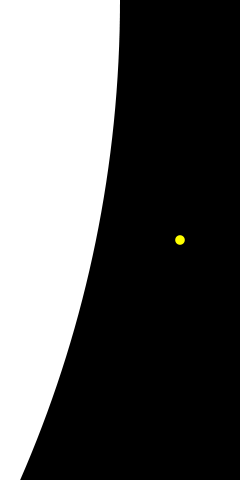 Based on an early analysis of the Hipparcos satellite measurements carried out in the early 1990s, Deneb’s given distance from Earth was about 2,615 light years or 802 parsecs. The star’s exact distance, now believed to be closer to 1,550 light years (475 parsecs), is still uncertain and has a significant margin of error.

The distance has been measured using a number of different methods which produced different values. Hipparcos measurements of Deneb’s parallax gave the value of 1.01 ± 0.57 milliarcseconds, which was consistent with the distance of 2,600 light years, but a more recent study indicates a considerably larger parallax and significantly smaller distance. The 2009 study that analysed the Hipparcos data yielded a distance of 1,550 light years (475 parsecs), with a 15% margin of error.

Deneb’s luminosity and temperature, as well as its small angular diameter of 0.002 arcseconds give a radius about 203 times that of the Sun. This makes Deneb one of the largest A-type stars known.

Before evolving into a supergiant, Deneb was a blue O-type main sequence star with about 23 solar masses. It has now stopped fusing hydrogen at its core, but its next stage of evolution is difficult to know. It is currently either cooling and expanding to become an exceptionally luminous red supergiant or it will become a luminous blue variable (LBV) or possibly a Wolf-Rayet star. Either way, its mass indicates that it will end its life as a supernova within the next few million years.

Deneb is a prototype for a class of variable stars known as the Alpha Cygni variables. These stars are class B or A supergiants that exhibit changes in brightness on the order of 0.1 magnitudes as a result of non-radial pulsations. This means that some parts of their stellar surface are contracting while others simultaneously expand. The pulsations can appear irregular because there are multiple pulsation periods, which typically last from several days to several weeks. The nature of the pulsations is not fully understood and their cause is uncertain, in part because they are not restricted to a specific range of luminosities and surface temperatures like most other pulsating stars.

Deneb’s brightness fluctuates between magnitudes 1.21 and 1.29. Similar small-scale rapid fluctuations have been observed in many early supergiants. They were officially grouped into a class, the Alpha Cygni (ACYG) variables, in 1985 in the fourth edition of the General Catalogue of Variable Stars. Similar variability has been observed in many luminous blue variables during their hot phases, but these stars are normally classified as LBVs.

Deneb’s variability has been known since the early 20th century. It was discovered by O. J. Lee, an astronomer at Yerkes Observatory, University of Chicago, who published his findings in the Astrophysical Journal in 1910.

Deneb will be the North Pole star (the nearest visible star to the north celestial pole) around the year 9800 AD, but as it will only come within 7° from the pole, it will not really mark true north. As the pole star, it will be preceded by Alderamin (Alpha Cephei) and succeeded by Fawaris (Delta Cygni). Both these stars will come within 3° of the pole. Polaris, the current North Star, is a much better indicator of true north, being located within 0.5° of the pole, but at magnitude 1.98, it is also considerably fainter than Deneb.

Deneb is the only star in Cygnus included on the list of the 58 navigational stars. The stars selected for navigation are some of the brightest and most recognizable stars in the sky. Vega and Altair, the other two stars of the Summer Triangle, are also members of this special group.

Like other first magnitude stars, Deneb is often used in various works of literature, film and television, as well as in video games. Some of the best known fictional uses of the star include Dan Simmons’ 1989 novel Hyperion, Anne McCaffrey’s “The Tower and the Hive” series, The Silver Surfer comic book series, the pilot episode of Star Trek: The Next Generation (“Encounter at Farpoint”) and the TV series Blake’s 7 and Babylon 5. 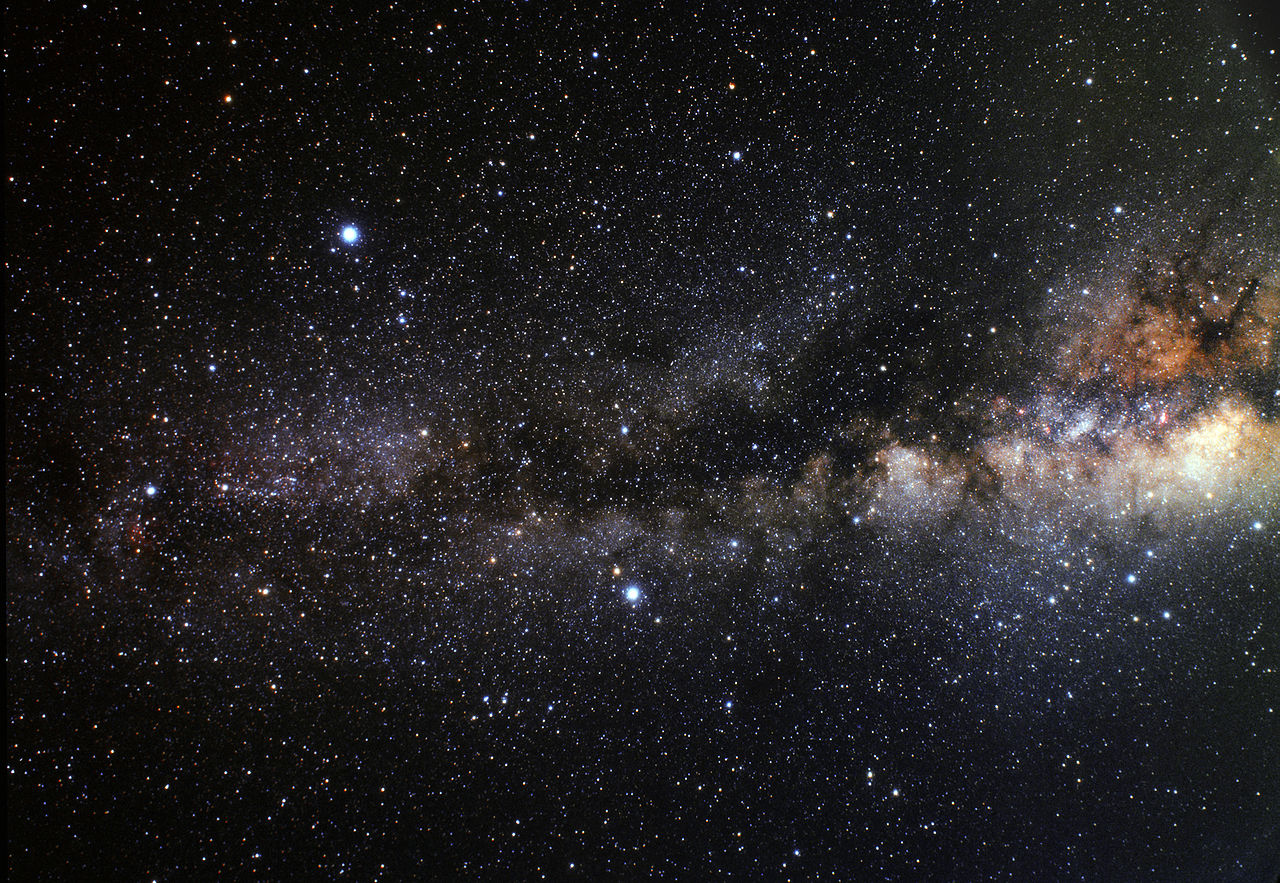 The name Deneb is derived from the Arabic Dhanab al-Dajājah, which means “the tail of the hen.” It was officially approved by the International Astronomical Union’s (IAU) Working Group on Star Names (WGSN) for Alpha Cygni on June 30, 2016.

Three other relatively bright stars have similar official names: Deneb Algedi (Delta Capricorni), Denebola (Beta Leonis) and Aldhanab (Gamma Gruis). Deneb Algedi and Denebola mark the tails of the animals their constellations represent (the sea-goat and the lion), while Aldhanab represents the tail of Piscis Austrinus, the Southern Fish, the constellation to which it belonged in Ptolemy’s time (2nd century CE). Additionally, the traditional (but unofficial) name Deneb el Okab, meaning “the tail of the eagle,” is shared by the stars Epsilon and Zeta Aquilae in the constellation Aquila, the Eagle. Officially named Diphda, the star Beta Ceti in the constellation Cetus, the Whale, is also known as Deneb Kaitos, while Iota Ceti is sometimes called Deneb Kaitos Shemali, or “the northern tail of the sea monster.”

Deneb has an older proper name, Arided, derived from the Arabic ar-ridf, meaning “the follower” or “the one sitting behind the rider,” possibly in reference to the other bright stars of Cygnus, which were known as al-fawāris, or “the riders.”  The name has fallen out of use.

In the Alfonsine Tables, compiled in Spain in the 13th century, Deneb was listed as Denebadigege. Similar variants include Deneb Adige and Denebedigege.

The German uranographer Johann Bayer referred to the star either as Arrioph (from Al Ridf, “the hindmost”) or Gallina (Latin for “hen”).

The Chinese know Deneb as the Fourth Star of the Celestial Ford (天津四), referring to the Chinese asterism Celestial Ford (天津), formed by Deneb with Sadr (Gamma Cygni), Fawaris (Delta Cygni), 30 Cygni, Nu Cygni, Tau Cygni, Upsilon Cygni, Zeta Cygni and Aljanah (Epsilon Cygni). The asterism represents a bridge across the Milky Way. In Chinese folklore, Deneb is associated with the myth of the cowherd and the weaver girl (represented by Altair and Vega), two separated lovers who can only reunite once a year, and the star marks the magpie bridge which allows them to meet. In other versions of the old tale, Deneb represents a fairy who chaperones the lovers when they reunite. The lovers’ meeting is celebrated at the annual Qixi Festival, traditionally held on the seventh day of the seventh month of the Chinese lunar calendar.

Deneb is very easy to find in the sky, even in less than ideal conditions. The star’s brightness and the two prominent summer asterisms it forms with other bright stars – the Summer Triangle and the Northern Cross – make it easy to identify and use to find other stars and interesting deep sky objects in this region of the sky. 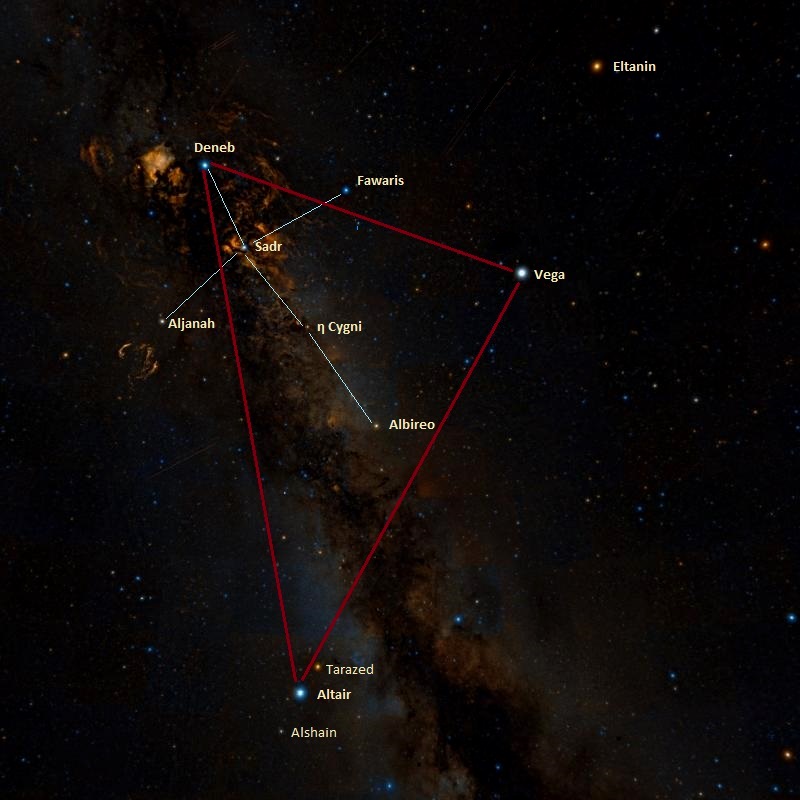 The Summer Triangle and the Northern Cross, image: Wikisky

Deneb marks the tip of the Northern Cross and is one of the vertices of the Summer Triangle. Both asterisms are prominent and high in the evening sky throughout the summer months in the northern hemisphere. The other bright stars that form the Northern Cross are Sadr (Gamma Cygni), Fawaris (Delta Cygni), Aljanah (Epsilon Cygni) and Albireo (Beta Cygni). Deneb, Sadr and Albireo mark the pole of the cross, while Fawaris and Aljanah, the stars marking the Swan‘s wings, form the cross beam.

Deneb is visible throughout the year for observers living north of latitude 45°N and it cannot be seen at all south of latitude 45°S. Being circumpolar to mid- and far northern latitudes, even at its lowest point, it appears just above the horizon, never setting below.

The North America Nebula (NGC 7000) and the Pelican Nebula (IC 5070) lie just to the east-northeast of Deneb. The two emission nebulae are part of the same H II region and are separated by a lane of interstellar dust. 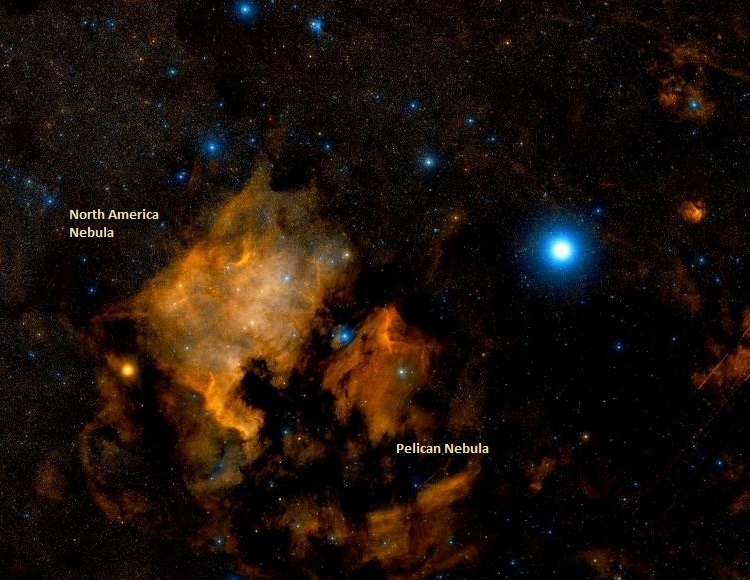 Cygnus is a popular target for telescopes because it is home to a number of interesting stars. These include the double stars Albireo, Fawaris and Mu Cygni, and Bessel’s Star (61 Cygni), one of the nearest star systems to Earth. Cygnus also contains the red supergiant or hypergiant NML Cygni, one of the largest stars known.