Diphda, Beta Ceti (β Cet), is a giant star located in the constellation Cetus. With an apparent magnitude of 2.02, it is the brightest star in Cetus. It lies at an approximate distance of 96.3 light years from Earth. It is also known by its other traditional name, Deneb Kaitos.

Diphda is a giant star near the border of spectral classes G and K. Some sources give the stellar classification K0 III, indicating an orange giant, while others give G9.5III, indicating a yellow-white giant. Either way, after starting its life as a class A main sequence star, Diphda has exhausted the supply of hydrogen in its core and expanded as it has evolved away from the main sequence.

The star has a mass 2.8 times that of the Sun and has grown to a size of 16.78 solar radii. With a surface temperature of 4,797 K, it shines with 139.1 solar luminosities. Its projected rotational velocity is 18 km/s.

Diphda is believed to be over a billion years old. It is believed to have undergone the helium flash (the nuclear fusion of helium that triggers a rapid rise in temperature and expansion) during its red giant stage and is now fusing helium into carbon in its core. Its radius has shrunk, and its surface temperature has increased. The star will stay in this stage for more than 100 million years.

A study published in 2001 reported that observations with the EUVE satellite revealed a series of coronal flares, indicating that flare activity was more common that previously suspected among giant stars burning helium in their cores.

In 2005, observations with the XMM-Newton space observatory picked up a relatively high rate of X-ray emission from the star. Diphda has a hot corona with about 2,000 times more X-ray output than the Sun.

Diphda is one of the 58 stars that have a special status in the field of celestial navigation. Navigational stars are some of the brightest and most identifiable stars in the sky. They span the area from the declination of -70° to +89° of the celestial sphere. Diphda and Menkar (Alpha Ceti) are among the navigational stars located in the equatorial region of the eastern hemisphere. The group also includes Hamal in Aries, Aldebaran and Elnath in Taurus, Alphard in Hydra, Rigel, Betelgeuse, Bellatrix and Alnilam in Orion, Pollux in Gemini, Sirius and Adhara in Canis Major, and Procyon in Canis Minor.

Even though it has the Bayer designation Beta, Diphda is the brightest star in Cetus. With a visual magnitude of 2.02, it noticeably outshines the red giant Menkar, Alpha Ceti (mag. 2.53). This is not unusual, as there are many Alpha stars that are not the brightest ones in their constellations. Rigel (Beta Orionis) usually outshines Betelgeuse (Alpha Orionis), Pollux (Beta Geminorum) is brighter than Castor (Alpha Geminorum), and Mirach (Beta Andromedae) is just as bright, if not slightly brighter than Alpheratz (Alpha Andromedae). When he assigned the Greek letter designations to stars, the German astronomer Johann Bayer was not guided by exact brightness, but by magnitude class.

The name Diphda (pronunciation: /ˈdɪfdə/) comes from the Arabic phrase aḍ-ḍifdaʿ aṯ-ṯānī, meaning “the second frog.” The word Diphda itself is Arabic for “frog.” The star’s Arabic name was translated into Latin as Rana Secunda. The star known as “the first frog” was Fomalhaut, the brightest star in the constellation Piscis Austrinus.

The name Diphda was officially approved by the International Astronomical Union’s (IAU) Working Group on Star Names (WGSN) on August 21, 2016.

The other traditional name of Beta Ceti, Deneb Kaitos (pronunciation: /ˌdɛnɛb ˈkeɪtɒs/), is derived from the Arabic Al Dhanab al Ḳaiṭos al Janūbīyy, meaning “the southern tail of the Sea Monster (Cetus).” In Greek mythology, the sea monster or whale (represented by the constellation Cetus) was sent by Poseidon to attack the kingdom of Aethiopia, ruled by Cepheus and Cassiopeia, after the queen had boasted of her daughter Andromeda’s beauty. Cassiopeia offended the sea god by saying that Andromeda was more beautiful than the Nereids, daughters of the sea god Nereus. To appease Poseidon, Andromeda was chained to a rock and left to the sea monster. Perseus, who happened to be passing through the kingdom at the time, used the head of the Gorgon Medusa to turn the monster to stone, and later married Andromeda.

Diphda stands out in an area of the sky that does not contain many particularly bright stars. It is located northeast of Fomalhaut (Alpha Piscis Austrini), the 18th brightest star in the sky. Fomalhaut can be found by extending a line from Scheat through Markab, the western stars of the Great Square of Pegasus, by 45 degrees across the sky. Diphda lies just east of the line drawn from Alpheratz through Algenib, the eastern stars of the Great Square. It forms a triangle with the brighter Fomalhaut and slightly fainter Ankaa, the brightest star in Phoenix. 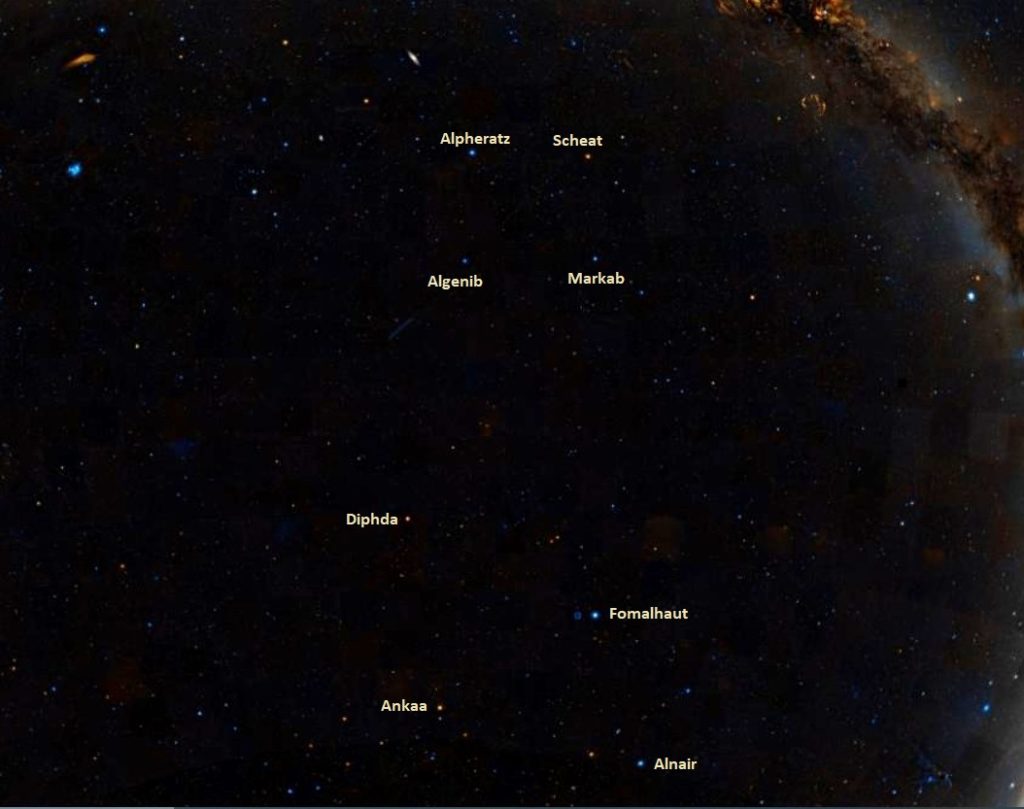 There are several galaxies appearing in the vicinity of Diphda. The bright spiral NGC 247 (mag. 9.9) lies at a distance of 11.1 million light years and is a member of the Sculptor Group. 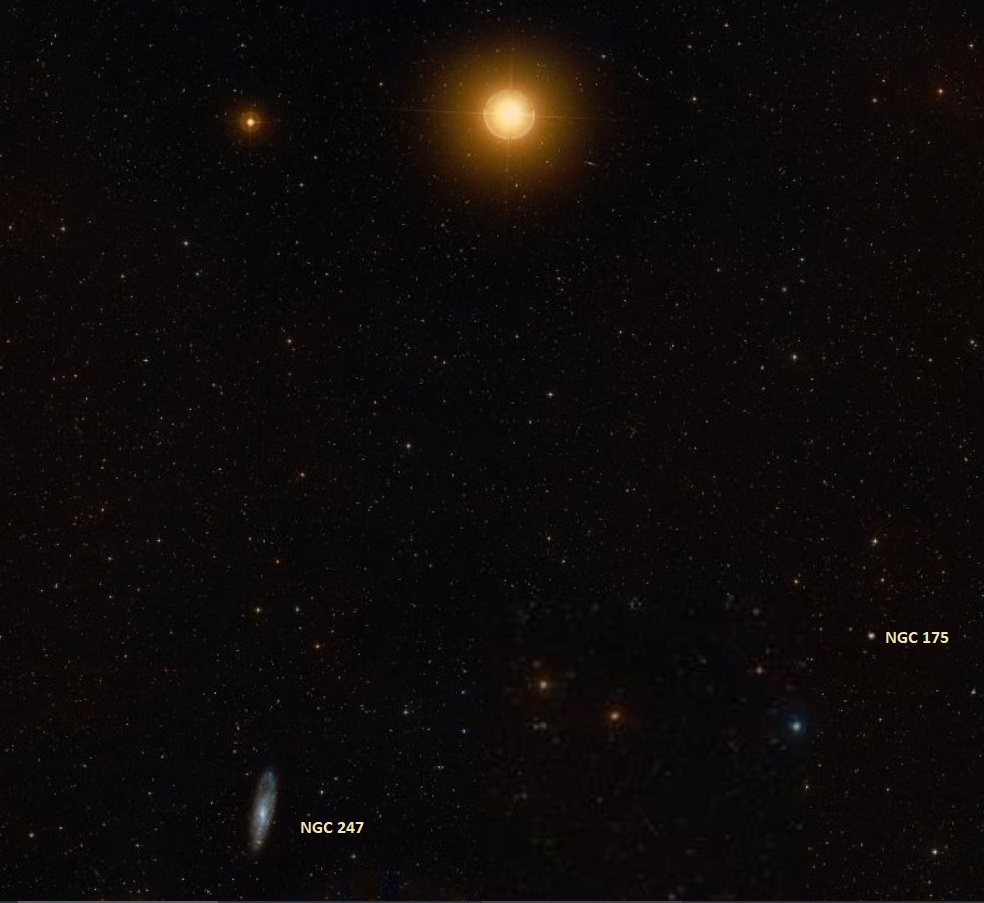 The barred spiral NGC 175 is a bit fainter at magnitude 12.9, and the late spiral PGC 2526 is considerably fainter and appears the closest to the star. 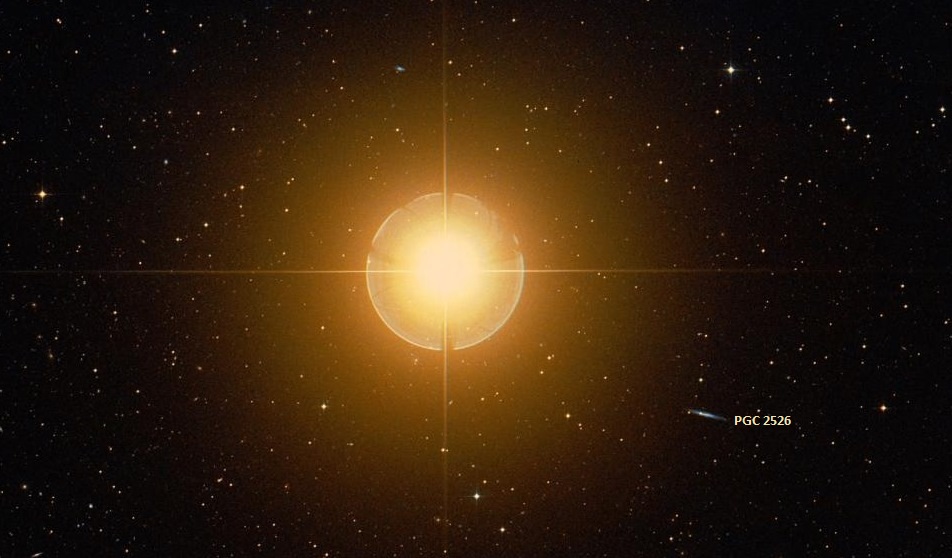 Diphda is located in the constellation Cetus. Representing the sea monster in the myth of Andromeda, Cetus is the fourth largest constellation in the sky. It is only smaller than Hydra, Virgo and Ursa Major. It stretches across 1,231 square degrees of the sky. Even though it is large, Cetus is not particularly prominent, as it contains only two stars brighter than magnitude 3.00: Diphda and Menkar. Like other constellations associated with figures from Greek mythology, Cetus was first listed by the astronomer Ptolemy of Alexandria in the 2nd century CE and is one of the 48 Greek constellations. It belongs to the Perseus family of constellations, along with Perseus, Andromeda, Cepheus, Cassiopeia, and Pegasus.

Cetus contains a number of notable stars and deep sky objects. It is home to Mira (Omicron Ceti), one of the best-known variable stars in the sky, Tau Ceti, the nearest Sun-like star (single G-type star) to Earth, which hosts five candidate planets, and UV Ceti, a prototype for a class of flare stars.

Bright deep sky objects in the constellation include the barred spiral galaxy Messier 77 (Cetus A), the spiral NGC 247 near Diphda, the spirals NGC 1042 and NGC 1035, the edge-on spiral galaxy NGC 1055, the irregular dwarf galaxy IC 1613, and the bright (mag. 8) planetary nebula NGC 246, also known as the Cetus Ring, Skull Nebula or Pac-Man Nebula.