Algenib, Gamma Pegasi (γ Peg), is a blue-white subgiant star located in the constellation Pegasus. With an average apparent magnitude of 2.84, it is the fourth brightest star in Pegasus, after Enif, Scheat and Markab. Algenib lies at an approximate distance of 390 light years from Earth. It is the faintest of the four stars that form the Great Square of Pegasus, a prominent asterism that marks the main body of Pegasus.

Algenib is a subgiant star of the spectral type B2 IV. It is running out of its supply of hydrogen to burn in its core and, as it slowly evolves away from the main sequence, it has expanded to a size of 4.80 solar radii. With a surface temperature of 21,179 K, it shines with 5,840 solar luminosities. Its estimated age is 18.7 million years.

With a mass 8.9 times that of the Sun, Algenib is not quite massive enough to end its life as a supernova. Instead, it will eventually evolve into a massive white dwarf.

Algenib is classified as a Beta Cephei variable. Its brightness varies between magnitude 2.78 and 2.89. Named after Alfirk (Beta Cephei), the prototype for this class, Beta Cephei stars are typically hot main sequence stars of the spectral type B with masses between 7 and 20 times that of the Sun. They show small rapid changes in brightness with periods of 0.1 to 0.3 days as a result of pulsations of their surfaces. The periods correspond to pulsation cycles.  Many other bright stars belong to this group, including Hadar (Beta Centauri), Shaula (Lambda Scorpii), Kappa Scorpii, Alniyat (Sigma Scorpii), Mirzam (Beta Canis Majoris), Mimosa (Beta Crucis), Spica (Alpha Virginis), Alpha Lupi, and Epsilon Persei. Algenib has a radial pulsation period of 3.642 hours, or 0.15175 days. It also shows other pulsation frequencies that are similar to those of slowly pulsating B stars (SPB).

A 2002 study measuring rotational velocities of B stars found a projected rotational velocity of 0 for Algenib. This means that either the velocity is too low to be measured, which would be unusual for a hot class B star, or the star is seen almost pole-on.

Algenib is one of the four bright stars that form the Great Square of Pegasus, a pattern that outlines the main body of the winged horse. The other stars that mark the vertices of the Great Square are Alpheratz (Alpha Andromedae), Scheat (Beta Pegasi), and Markab (Alpha Pegasi). Located 390 light years away, Algenib is by far the most distant, twice as distant as Scheat (196 ly), the next most distant of the four. Even though it is the faintest of the four stars, Algenib is by far the most luminous.

Variations in the radial velocity of Algenib were discovered by the American astronomer Keivin Burns in 1911. However, no period was found to classify the star. The variations were confirmed in 1953 by the American astronomer D. Harold McNamara, who classified the star as a variable of the Beta Canis Majoris type based on its spectral class, variable velocity, and short period. At the time, Beta Cephei stars were commonly referred to as Beta Canis Majoris variables. D. H. McNamara gave a period of 3h 38m based on a series of spectrograms obtained using the Mills III-prism spectrograph at the Lick Observatory in California.

The name Algenib (pronunciation: /ælˈdʒiːnɪb/) comes from the Arabic al-janb, meaning “the side.” It was traditionally used both for Gamma Pegasi and Alpha Persei, the brightest star in the nearby Perseus constellation. Gamma Pegasi is now formally known as Algenib, while Alpha Persei goes by its other traditional name, Mirfak.

The name Algenib was approved by the International Astronomical Union’s (IAU) Working Group on Star Names (WGSN) on June 30, 2016.

The Chinese know Gamma Pegasi as 壁宿一 (Bìxiù yī), the First Star of Wall. The Chinese Wall mansion is formed by Algenib with Alpheratz, the brightest star in Andromeda. It is one of the seven mansions of the Black Tortoise.

In Hindu astronomy, the asterism formed by Algenib and Alpheratz is known as Uttara Bhādrapadā or Uttṛṭṭāti. It is the 26th nakshatra (lunar mansion) in Hindu astrology.

Algenib is easy to find because it is part of a prominent northern asterism. It marks the southeast corner of the Great Square of Pegasus. The asterism can be found using the bright stars of Cassiopeia’s W. A line extended from Segin through Ruchbah, the stars on the left side of the W, points in the direction of the Great Square. 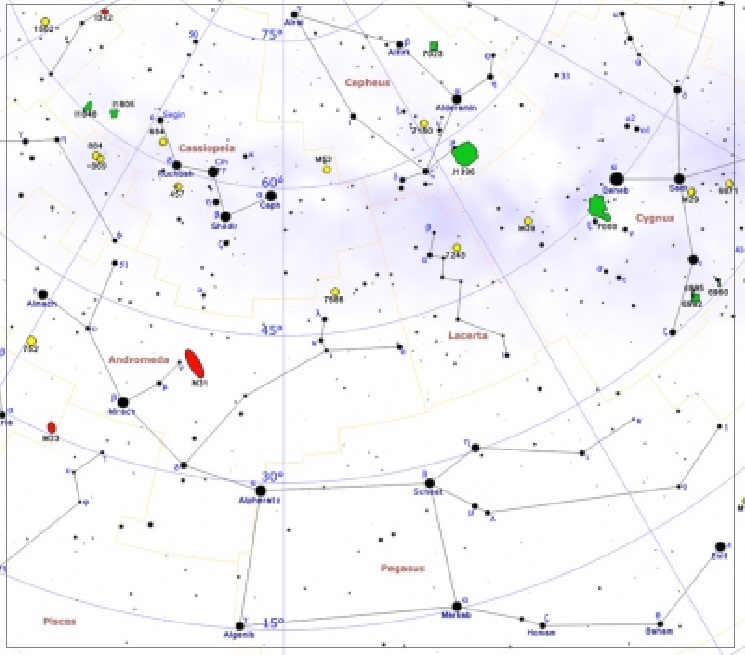 Algenib can be used to find the irregular galaxy NGC 14. The galaxy has a visual magnitude of 12.71 and lies about 47.1 million light years away. 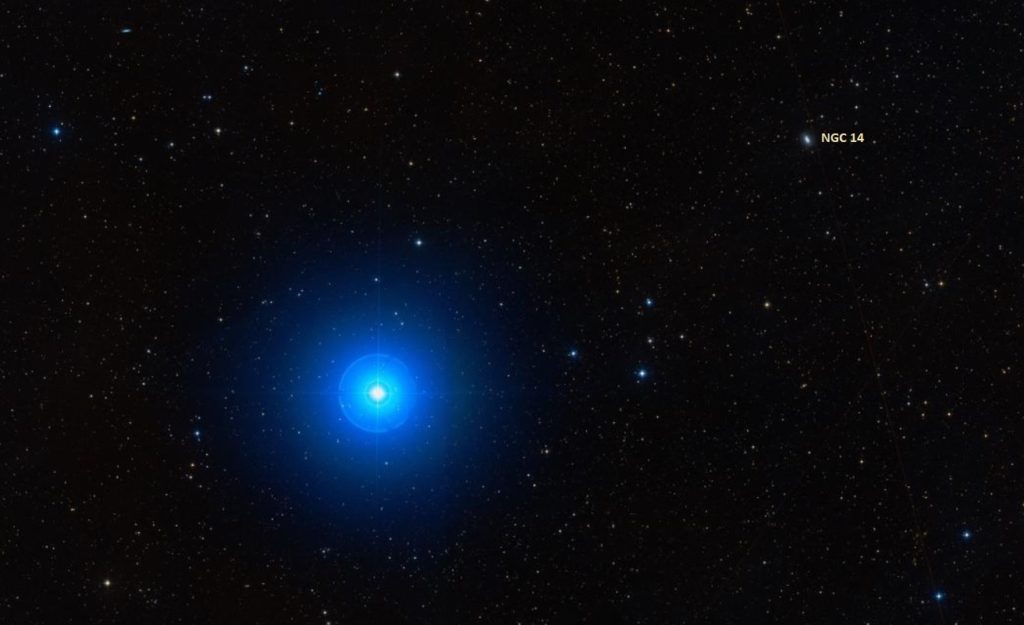 Algenib is located in the constellation Pegasus. It marks the tip of the wing of the celestial horse. Pegasus is one of the 48 ancient constellations first listed by the astronomer Ptolemy of Alexandria in the 2nd century CE. It is the seventh largest constellation in the sky and the third largest northern constellation, after Ursa Major and Hercules. It stretches across 1,121 square degrees of the northern sky. The best time of year to observe the stars and deep sky objects in Pegasus is during the month of October, when the constellation is prominent in the evening sky.