Imai, Delta Crucis (δ Cru) is a blue-white subgiant star located in the constellation Crux.  With an apparent magnitude of 2.79, it is the fourth brightest star in the constellation. Together with the brighter Acrux, Mimosa and Gacrux, it forms the Southern Cross. While it is invisible from most of the northern hemisphere, the asterism is one of the best known patterns in the sky south of the equator.

Imai lies at an approximate distance of 345 light years from Earth. It has the stellar classification B2 IV, indicating a subgiant star appearing bluish in colour. It has a mass 8.9 times that of the Sun and a radius 8 times solar. With an effective temperature of 22,570 K, it shines with 10,000 solar luminosities, but much of its energy output is in the invisible ultraviolet part of the spectrum.

The star has stopped fusing hydrogen in its core and is currently in the process of moving away from the main sequence and becoming a giant. It will eventually evolve into a red giant. Based on its mass, Imai is not a supernova candidate and will eventually end its life as a massive white dwarf after puffing away its outer envelope to form a planetary nebula. Imai is a fast spinner, with a projected rotational velocity of 210 km/s. The star’s estimated age is 18.1 million years.

Delta Crucis is a member of the Scorpius-Centaurus association (Sco OB2), the nearest OB association to the solar system, which includes many of the bright stars in Centaurus, Crux, Scorpius and Lupus. Imai belongs to the Lower Centaurus-Crux (LCC) subgroup. Members of the Scorpius-Centaurus group are massive stars that formed in the same molecular cloud and share a common motion through space. The stars in the LCC subgroup have an estimated age between 16 and 20 million years.

The stars of the Southern Cross were visible from mid-northern latitudes in ancient times. In ancient Greece and Rome, they were regarded as part of the larger Centaurus constellation.

The Southern Cross plays a prominent role in many cultures south of the equator. The brightest stars of Crux are represented on the flags of Australia, New Zealand, Brazil, Papua New Guinea and Samoa. On the flag of Brazil, Delta Crucis symbolizes the state of Minas Gerais. In the lore of the Aranda and Luritja people of the Northern Territory in Australia, Imai is part of a quadrangular pattern known as Iritjinga, “the eagle-hawk.” Other stars that form the asterism are Imai’s Southern Cross neighbour Gacrux and Centaurus stars Muhlifain (Gamma Centauri) and Delta Centauri.

The name Imai was given to the star by the Mursi people of southwest Ethiopia. The star has some relevance in their culture because the Mursi use a number of southern stars to track the seasonal flooding of the Omo river. When Imai stops appearing in the evening sky at sundown in late August, the river rises and flattens the imai grass on its banks before subsiding. The name was officially approved by the International Astronomical Union’s (IAU) Working Group on Star Names (WGSN) on August 10, 2018.

The Chinese know the star as 十字架四 (Shí Zì Jià sì), or the Fourth Star of Cross. The Chinese Cross asterism is formed by the Southern Cross stars Acrux, Mimosa, Gacrux and Imai.

In Portuguese, the star is known as Pálida, meaning “the pale one.” It is the faintest of the four stars that form the Southern Cross.

At declination -59°, Imai never rises above the horizon for most northern observers, but is visible from most of the southern hemisphere throughout the year.

The star is very easy to find because it is part of a bright, prominent asterism. The Southern Cross is easy to identify because two exceptionally bright stars – Alpha and Beta Centauri, also known as the Southern Pointers – point in its direction. A line extended from Alpha through Beta Centauri leads to Gacrux, the top star of the Cross, and Imai lies on the right side of the asterism. It is the farthest of the four stars from the Southern Pointers.

Imai can be used to find the open cluster NGC 4337, which lies roughly halfway between the star and its brighter neighbour Gacrux, the top star of the Southern Cross. 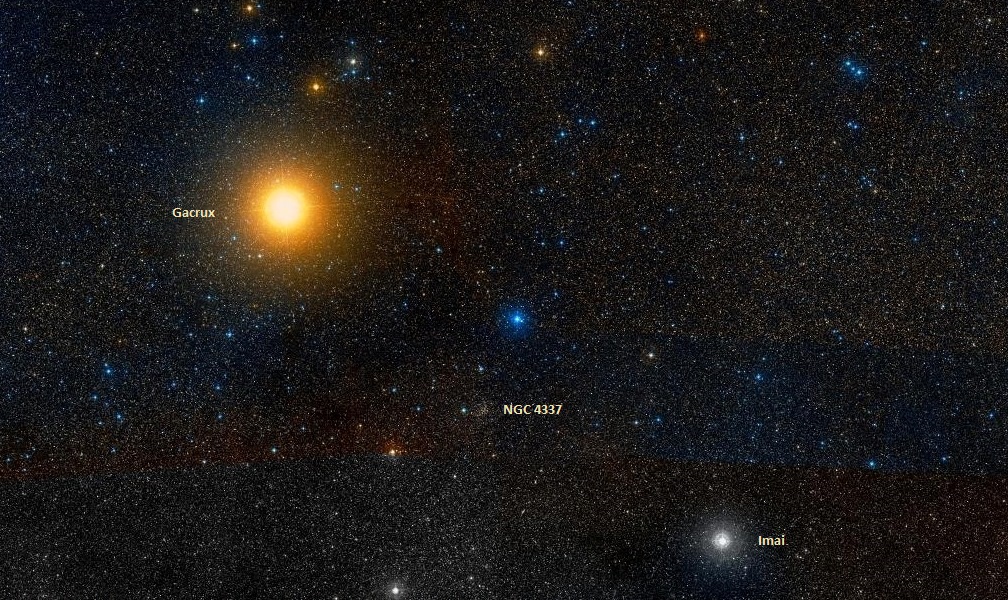 Imai is located in Crux, the smallest constellation in the sky. Known mainly for the Southern Cross, formed by its brightest stars, Crux is also home to several notable deep sky objects. The best known ones are the Kappa Crucis Cluster (NGC 4755), also known as the Jewel Box, a bright young open cluster located just southeast of Mimosa, and the Coalsack Nebula, the most prominent dark nebula in the sky, appearing as a dark patch in the Milky Way between Acrux and Mimosa. The best time of year to observe the stars and deep sky objects of Crux is during the month of May, when the constellation is particularly prominent in the evening sky.