Ginan, Epsilon Crucis (ε Cru), is an orange giant star located in the constellation Crux.  It is sometimes considered to be the fifth star of the Southern Cross, a bright southern asterism formed by the brighter Acrux, Mimosa, Gacrux and Imai. With an apparent magnitude of 3.58, Ginan is the fifth brightest star in Crux. It lies at a distance of 230 light years from Earth.

Ginan has the stellar classification K3 III, indicating a giant star appearing orange in colour. The star has 1.52 solar masses and has expanded to a size of 28.41 solar radii. With an effective temperature of 4,294 K, it shines with a luminosity 302 times that of the Sun. The star’s estimated age is 2.17 billion years. It started its life as a bluish-white (class A) main sequence star and, once it ran out of its supply of hydrogen, it started expanding to become a giant.

Ginan is moving in our direction with a radial velocity of -4.60 km/s-1. It is classified as an irregular variable star, showing variations in brightness from magnitude 3.4 to 4.0. Ginan is included in the Southern Cross asterism in many cultures south of the equator, where the constellation has a particular importance and cultural significance. The five bright stars are represented on the flags of Australia, Brazil, Papua New Guinea and Samoa. On the Brazilian flag, each star symbolizes a Brazilian Federative Unit and Ginan represents the state of Espírito Santo. The stars of the Southern Cross were visible from mid-northern latitudes in ancient times, but have sunk below the horizon for most northern observers due to the Earth’s axial precession. In ancient Greece and Rome, the stars of Crux were considered to be part of the neighbouring constellation Centaurus.

The name Ginan (pronunciation: /ˈɡiːnən/) is the star’s traditional name in the culture of the Wardaman people of the Northern Territory of Australia. It refers to a red dilly bag containing special songs of knowledge – the “Bag of Songs” – in Wardaman creation mythology. In Wardaman lore, the songs are about initiation, which is associated with Larawag, the signal watcher, who manages initiation ceremonies. (Larawag is the Wardaman traditional name for Epsilon Scorpii.)

The name Ginan was officially approved by the International Astronomical Union’s (IAU) Working Group on Star Names (WGSN) on November 19, 2017.

In Portuguese, the star is also known as Intrometida, “the intrusive one.”

The stars of the Southern Cross are invisible to most northern observers, but can be seen from most locations south of the equator throughout the year.

Ginan is very easy to find because it is part of one of the most prominent asterisms in the southern sky. The Southern Cross is easy to identify because it is formed by four exceptionally bright stars and lies close to the Southern Pointers, Alpha and Beta Centauri. A line drawn from Alpha Centauri through Beta Centauri leads toward Gacrux, the top star of the Cross asterism. Ginan lies between Acrux, the star at the base of the Cross and Imai, the star on the right side of the asterism. 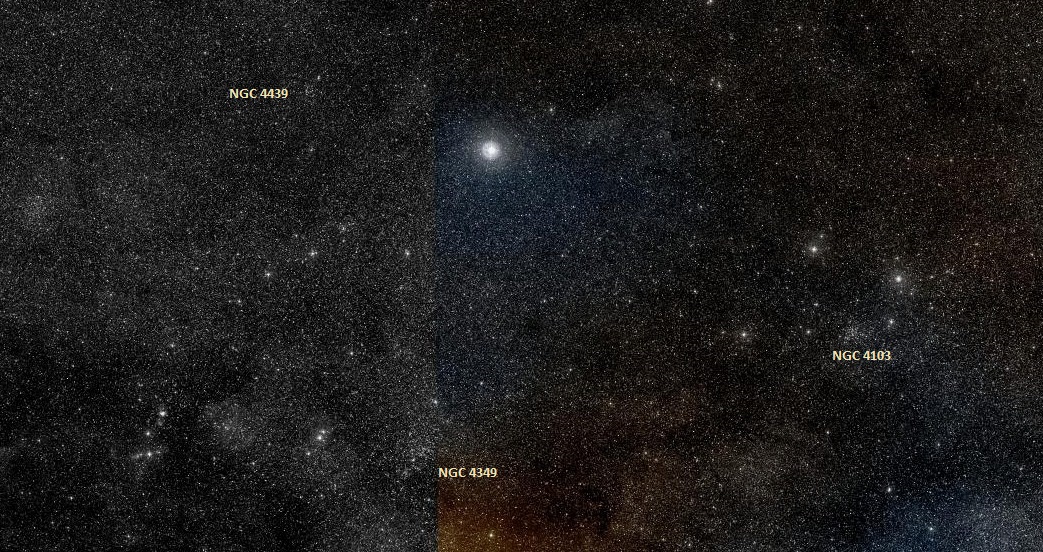 Ginan is located in the constellation Crux. Even though it is the smallest of all 88 constellations, Crux is also one of the most recognizable ones in the southern hemisphere. Known mainly for the pattern formed by its brightest stars, Crux is also home to several interesting deep sky objects. The best known ones are the Jewel Box Cluster (NGC 4755), also known as the Kappa Crucis Cluster, a bright open star cluster that lies just southeast of Mimosa, and the Coalsack Nebula, the most conspicuous dark nebula in the sky, which can be seen between the constellation’s brightest stars, Acrux and Mimosa. The best time of year to see the stars and deep sky objects in Crux is during the month of May, when the constellation rises high in the evening sky.