Mirzam, Beta Canis Majoris (β CMa), is a blue-white giant or bright giant star located in the constellation Canis Major. With an average apparent magnitude of 1.985, it is the fourth brightest star in Canis Major, after Sirius, Adhara, and Wezen. Mirzam lies at an approximate distance of 490 light years from Earth.

Mirzam is a young star of the spectral type B1 II-III. The stellar classification indicates a giant or bright giant appearing blue-white in colour.

The star has a mass 13.5 times that of the Sun and, as it evolved away from the main sequence, it has expanded to a size of 9.7 solar radii. With a surface temperature of 23,150 K, Mirzam is 26,600 times more luminous than the Sun, but most of its output is in the invisible ultraviolet. The star’s projected rotational velocity is about 31 km/s.

Even though Mirzam is very young, with an estimated age of 12.4 million years, like all massive stars, it has evolved quickly and will not live a very long life. It is currently expanding and cooling, and will eventually become a red giant or supergiant. With a mass of 13.5 solar masses, when it reaches the end of its lifecycle it will not go quietly. Instead, it will meet its end as a brilliant supernova.

Mirzam is classified as a Beta Cephei variable. Its brightness varies between magnitude +1.97 and +2.01 with a period of about 6 hours. The amplitude of the variations is too small to be noticed by the unaided eye.

Mirzam is one of the 27 bright stars that are featured on the flag of Brazil. Each star represents a Brazilian Federative Unit and Mirzam symbolizes the state of Amapá.

The name Mirzam (pronunciation: /ˈmɜːrzəm/) comes from the Arabic Al-Murzim, meaning “the herald.” It refers to the star’s rising just before Sirius. The name has also been spelled as Murzim and Mirza.

In the Tuamotu Archipelago, the star was called Oupo.

Mirzam is very easy to find because it lies in the vicinity of Sirius, the brightest star in the sky. Sirius is easy to identify both because it is exceptionally bright and because it has a prominent asterism, the Belt of Orion, pointing directly at it. A line extended from Mintaka, the westernmost star of Orion’s Belt, through Alnilam and Alnitak, leads in the direction of Sirius. Mirzam is located just southwest of Sirius. 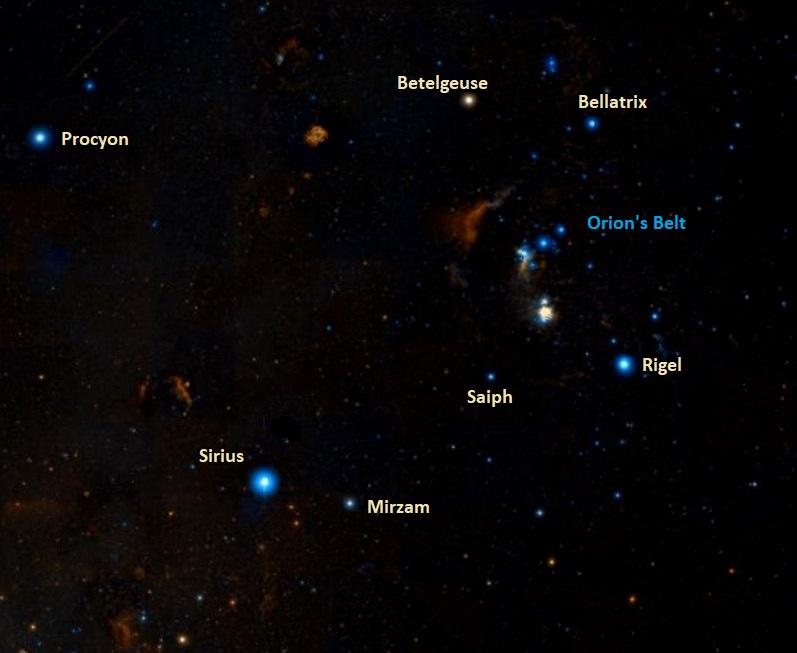 Mirzam can be used to find the open cluster NGC 2204. The cluster is fairly bright and large, with an apparent magnitude of 8.6 and an apparent size of 13’. It lies at a distance of 8,600 light years from Earth. 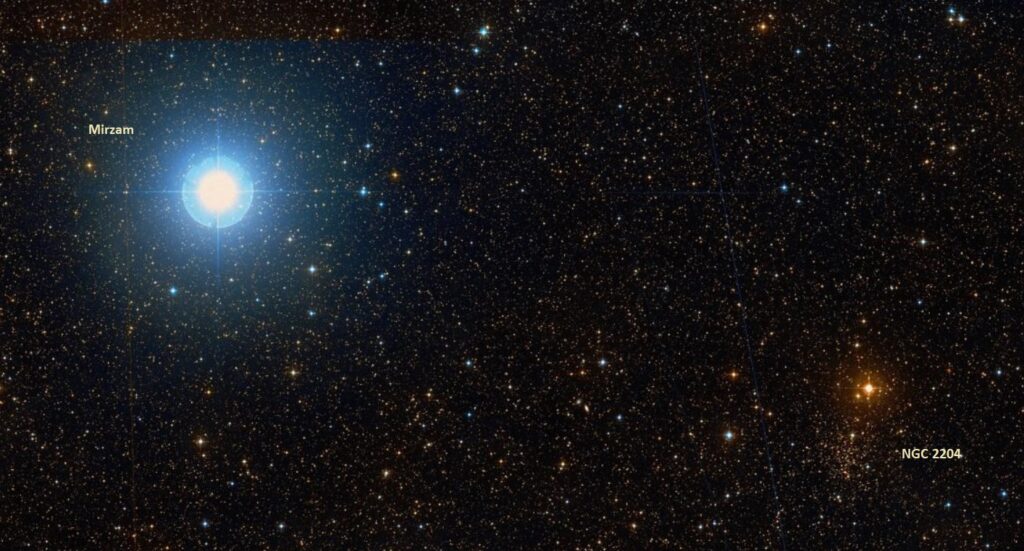 Mirzam is located in the constellation Canis Major, the Greater Dog. It marks the dog’s front leg or paw. Canis Major is the 43rd constellation in size, occupying an area of 380 square degrees. Best known for being home to Sirius, the brightest star in the sky and one of our nearest neighbours, Canis Major has been familiar to observers since ancient times. It is one of the 48 Greek constellations, first listed by the astronomer Claudius Ptolemy of Alexandria in the 2nd century CE. It represents the larger dog following Orion, the Hunter. The smaller dog is represented by the neighbouring constellation Canis Minor. Canis Major contains a number of notable stars, including the bright Sirius, the red hypergiant VY Canis Majoris, one of the largest known stars, and the bright supergiants Wezen and Aludra. Bright deep sky objects in the constellation include the open clusters Messier 41, NGC 2360 (Caroline’s Cluster) and NGC 2362 (the Tau Canis Majoris Cluster), the Canis Major Dwarf, the closest neighbouring galaxy to Earth, the colliding galaxies NGC 2207 and IC 2163, and the emission nebula NGC 2359, nicknamed the Thor’s Helmet Nebula.