Alhena, Gamma Geminorum (γ Gem), is a spectroscopic binary star system located in the northern constellation Gemini. With an apparent magnitude of 1.915, it is the third brightest point of light in Gemini, after Pollux and Castor. Alhena lies at an approximate distance of 109 light years from Earth. It marks the foot of Pollux, one of the twins represented by the constellation.

Gamma Geminorum is a spectroscopic binary star with the stellar classification A1.5 IV. The two components orbit each other with a period of 4,614.51 days (12.6 years).

The primary component, formally named Alhena, has stopped fusing hydrogen in its core as it evolved away from the main sequence. It is a white subgiant star with a mass of 2.81 solar masses and a radius 3.3 times that of the Sun. With an effective temperature of 9,260 K, it shines with 123 solar luminosities. It has a projected rotational velocity of 10.7 km/s.

Observations of the occultation of the system by the asteroid 381 Myrrha in 1991 revealed that the secondary component was almost 200 times fainter than the primary and that it was a class G main sequence star, like the Sun. The companion is believed to have the same mass as the Sun. It orbits Alhena at an average separation of 8.5 astronomical units, which is roughly the distance between the Sun and Saturn. However, the two components have a highly elliptical orbit which takes them within 1 astronomical unit (Earth-Sun distance) of each other and as far apart as 20 astronomical units (Sun-Uranus distance). On average, Alhena is the 43rd brightest star in the sky. It is slightly fainter than Sargas in the constellation Scorpius and Avior in Carina, about as bright as Menkalinan in Auriga and Atria in Triangulum Australe, and it just outshines Peacock in Pavo, Alsephina in Vela, Mirzam in Canis Major, Alphard in Hydra, and Polaris in Ursa Minor.

The name Alhena (pronunciation: /ælˈhiːnə/) is derived from the Arabic Al Han’ah, meaning “the brand.” It refers to the brand on a camel’s neck. The Arabic name once applied to an asterism formed by Gamma Geminorum with Tejat (Mu Geminorum), Nu Geminorum, Propus (Eta Geminorum), and Alzirr (Xi Geminorum). The stars were also called Al Nuḥātai, which is the dual form of the Arabic Al Nuḥāt, meaning “a camel’s hump.”

The name Alhena was approved by the International Astronomical Union’s (IAU) Working Group on Star Names (WGSN) on July 20, 2016. It formally applies only to the primary component.

Gamma Geminorum has also traditionally been known as Almeisan, from the Arabic Al Maisan, meaning “the shining one.” The name was once used for Lambda Orionis by mistake and it stuck. The star that marks Orion‘s head is still known as Meissa (the name is derived from Al Maisan).

The Egyptian astronomer Al Achsasi Al Mouakket listed the star as Nir al Henat, “the brightest of Al Henat,” in his Calendarium, written around 1650. The name was later translated into Latin as Prima του al Henat.

Alhena marks the foot of Pollux, the southern twin of Gemini. The star is very easy to find because it is located in an area full of exceptionally bright stars. It lies within the prominent Winter Hexagon asterism, formed by six first-magnitude stars (Sirius in Canis Major, Procyon in Canis Minor, Pollux in Gemini, Capella in Auriga, Aldebaran in Taurus and Rigel in Orion). 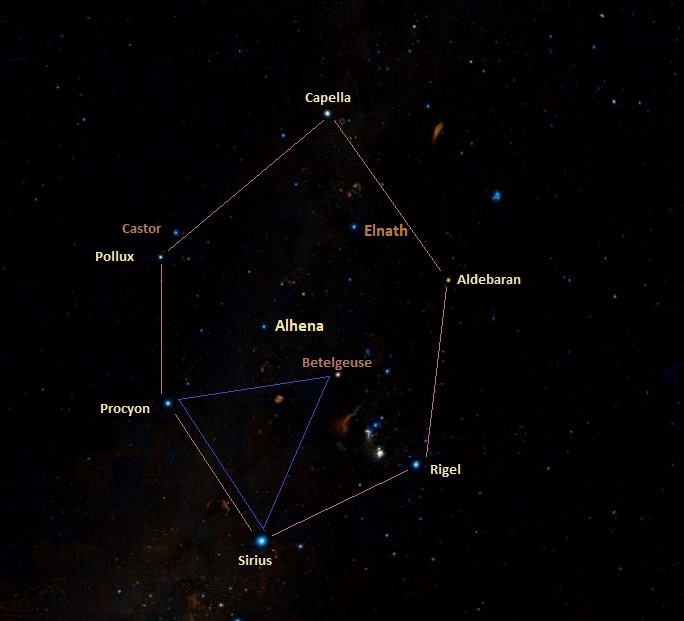 Located just northeast of Orion’s prominent hourglass figure, Alhena is the brightest star between Betelgeuse and Pollux. Betelgeuse is easy to identify because it marks the right shoulder of Orion (left from our perspective), while Pollux and Castor can be found near an imaginary line extended from Rigel through Betelgeuse. Even though they are quite different, the stars representing the celestial twins’ heads appear similar and are close to each other. Alhena is also the brightest star between Procyon, the luminary of Canis Minor, and Elnath, the star that marks the northern horn of Taurus, and forms a triangle with Betelgeuse and Procyon. 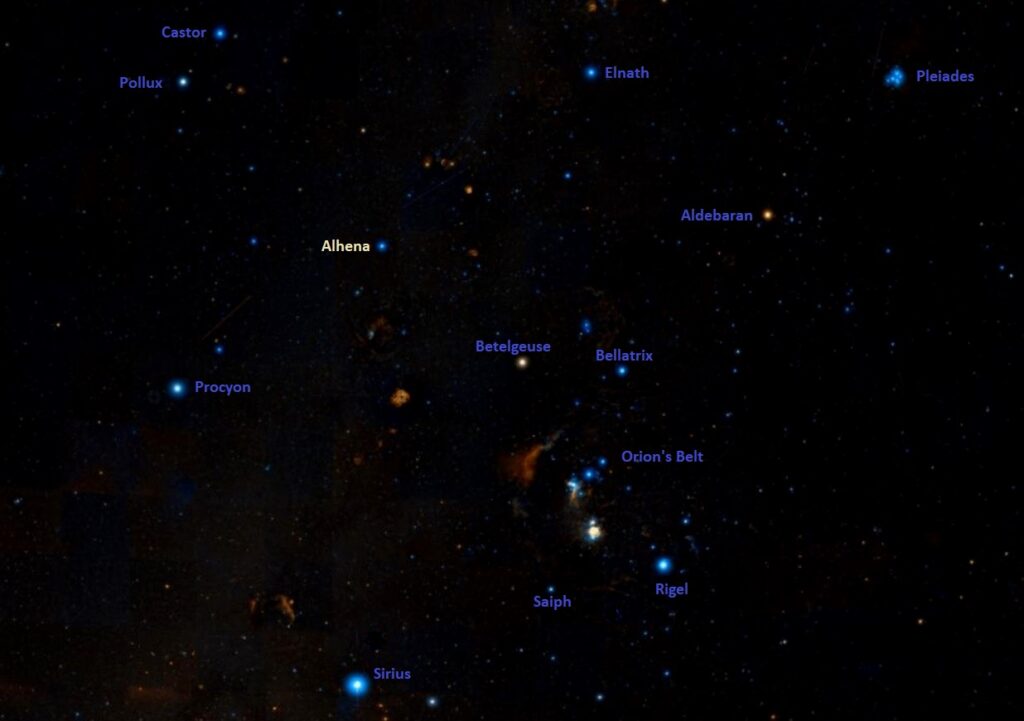 Alhena is located in the constellation Gemini. Gemini is one of the 48 ancient constellations first listed by the Greek astronomer Ptolemy of Alexandria in the 2nd century CE. It represents the twins Castor and Pollux in Greek mythology.

Gemini occupies 514 square degrees of the northern sky and is the 30th largest of all constellations. It is best known for its bright stars Pollux and Castor, as well as the bright binary star systems Delta Geminorum (Wasat), Epsilon Geminorum (Mebsuta), Zeta Geminorum (Mekbuda), and Eta Geminorum (Propus), and the neutron star Geminga. Gemini is also home to many interesting deep sky objects. These include the bright, large open cluster Messier 35, the supernova remnant IC 443, nicknamed the Jellyfish Nebula, and the planetary nebulae NGC 2392, also known as the Clown Face Nebula, and the Medusa Nebula (Sharpless 2-274).

The best time of year to observe the stars and deep sky objects in Gemini is during the month of February, when the constellation rises high in the evening sky.