Alkaid, Eta Ursae Majoris (η UMa) is a blue main sequence star with an apparent magnitude of 1.86, located at a distance of 103.9 light years from Earth. It is the easternmost star of the Big Dipper. It forms the Dipper’s handle with its bright neighbours, Mizar (ζ UMa) and Alioth (ε UMa), while Megrez (δ UMa), Phecda (γ UMa), Dubhe (α UMa) and Merak (β UMa) form the Dipper’s bowl.

Alkaid is a young star of the spectral type B3 V, indicating a star bluish in colour and still on the main sequence, burning hydrogen into helium in its core. It has 6.1 times the Sun’s mass and 3.4 times its radius. With an estimated temperature of 15,540 K, Alkaid is about 594 times more luminous than the Sun. It has an absolute magnitude of -0.67.

Alkaid is a fast spinner, with a projected rotational velocity of 150 km/s. Its estimated age is only 10 million years.

The star’s high surface temperature is likely due to “gravity darkening,” a phenomenon common among fast spinners. The stars that rotate so rapidly have an oblate spheroid shape and their equatorial radius is larger than their radius at the poles. Because the poles are closer to the centre of mass, they have a higher surface gravity, as well as higher temperature. As a result, their poles are brighter than the equator. Vega in the constellation Lyra and Achernar in Eridanus, the 5th and 9th brightest stars in the sky, are two other well-known examples of this.

B-type stars have pretty short lives. Alkaid is expected to burn through its supply of fuel in less than 100 million years and start evolving into a giant. It will eventually shed its outer layers to become a white dwarf with a mass of about 0.85 solar masses.

Alkaid’s brightness and relative proximity to Earth have made it a frequent object of study, but no companion stars or planets have been detected orbiting the star.

Alkaid is one of the three navigational stars in Ursa Major. The other two are the brighter Alioth and Dubhe. The 58 stars selected for navigation have a special status in the field of celestial navigation and were chosen both because they are exceptionally bright and because they are easy to identify.

Even though Alkaid is the third brightest star in Ursa Major, it has the designation Eta Ursae Majoris. This is because the German uranographer Johann Bayer, who catalogued the stars and assigned Greek letters next to Latin genitives of constellation names in his star atlas Uramonetria (1603), did not follow the exact order of brightness, but used magnitude class instead. He assigned the Greek letters to Ursa Major’s brightest stars from west to east. This is why Dubhe, the westernmost (and second brightest) star has the designation Alpha Ursae Majoris, while Alioth, the constellation’s brightest star, was given the designation Epsilon.

Alkaid and Dubhe are the only Big Dipper stars that are not members of the Ursa Major Moving Group, a stellar association that includes most of the brightest stars in Ursa Major, as well as a number of bright stars in other constellations, among them Adhafera (Zeta Leonis), Menkalinan (Beta Aurigae), Alphecca (Alpha Coronae Borealis), Beta Serpentis, Skat (Delta Aquarii) and Gamma Leporis.  The members of the stellar association share common velocities and proper motion because they formed in the same molecular cloud at about the same time. If Alkaid and Dubhe belonged to the group, the Big Dipper asterism would stay mostly unchanged over time. As they do not and are moving in opposite directions, the asterism will disperse in the next several tens of thousands of years.

In medieval astrology, Alkaid was one of the 15 Behenian fixed stars, believed to be a source of astrological power and used for magical applications. Alkaid was associated with Venus and the Moon and related to magnet and succory, which were used in rituals to bring out the star’s influence.

The name Alkaid (pronunciation: /ælˈkeɪd/) is derived from the Arabic phrase qā’id bināt naʿsh, which means “the leader of the daughters of the bier.” The word itself means “leader.” The name is sometimes also spelled Elkeid. In ancient Arabic astronomy, the stars of the Big Dipper symbolized a funeral procession. The stars that form the Dipper’s handle – Alkaid, Mizar and Alioth – represented the mourners, while the stars of the Dipper’s bowl – Megrez, Phecda, Dubhe and Merak – represented the coffin or bier. Alkaid’s other traditional name, Benetnasch, is derived from the same phrase.

The name Alkaid was officially approved for the star by the International Astronomical Union’s (IAU) Working Group on Star Names (WGSN) on June 30, 2016.

The Chinese know Alkaid as Běidǒuqī (北斗七) the Seventh Star of the Northern Dipper (a Chinese asterism that corresponds to the Big Dipper) and as Yáoguāng (瑤光), the Star of Twinkling Brilliance.  The Japanese and the Koreans know it as Hagunsei and Mukokseong (“the military breaking star” or “most corner star”). Both names have their origins in ancient China.

In Hindu mythology, the star is associated with Marīci, one of the Saptarishi (the Seven Sages), the son of Brahma and the grandfather of the Hindu deities known as the Asuras and the Devas.

Alkaid is very easy to find because it is part of one of the most familiar asterisms in the night sky. It is the leftmost star of the Big Dipper‘s handle, or the star that appears the furthest from the Dipper’s bowl.  It marks the tip of the Great Bear’s tail. 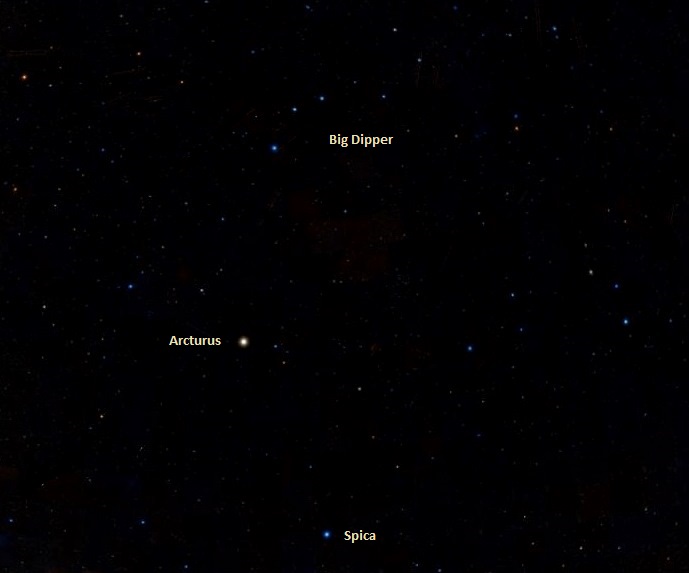 Alkaid is located in the vicinity of several bright deep sky objects. The Pinwheel Galaxy (Messier 101) can be seen above the Big Dipper’s handle, forming a triangle with Alkaid and its neighbour Mizar, the middle star of the Dipper’s handle. Two other famous galaxies lie just below the handle, in the area between Alkaid and Cor Caroli, the brightest star in the constellation Canes Venatici. These are the Whirlpool Galaxy (Messier 51) and the Sunflower Galaxy (Messier 63). 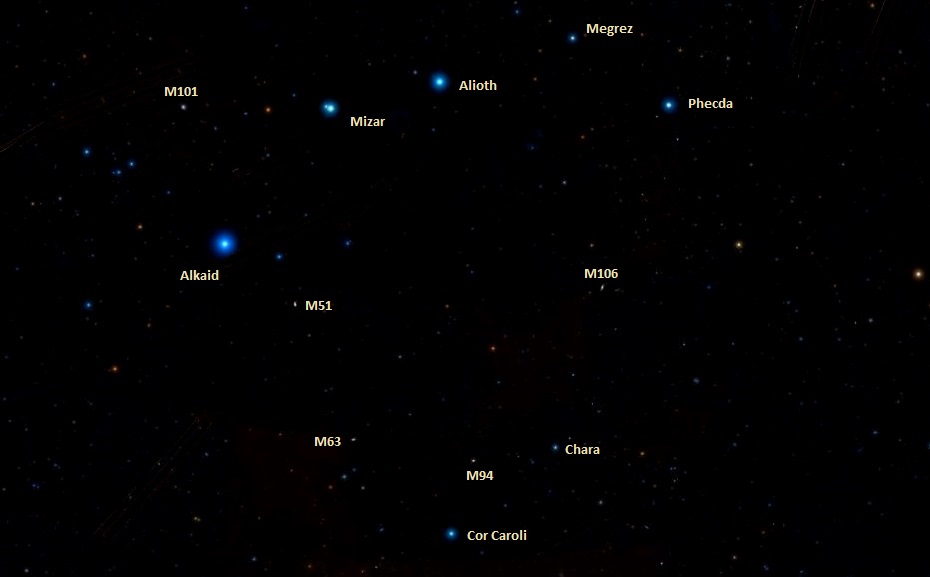 The spiral galaxy Messier 94 can be also be found in this area, by extending an imaginary line from Alkaid through the Whirlpool Galaxy. M94 forms a triangle with Cor Caroli and Chara (Alpha2 and Beta Canum Venaticorum).

M101 is located in Ursa Major, while the other galaxies – M51, M63 and M94 – all lie in the neighbouring Canes Venatici.

Alkaid is located in the northern constellation Ursa Major, the third largest constellation in the sky, after Hydra and Virgo, and the largest of all northern constellations. Ursa Major’s size and the familiarity of the Big Dipper asterism make the constellation popular among stargazers, as it is home to many notable deep sky objects. In addition to the Pinwheel Galaxy (M101), Ursa Major contains Bode’s Galaxy (M81), its neighbour the Cigar Galaxy (M82), the barred spiral galaxies M108 and M109, and the bright planetary nebula M97, also known as the Owl Nebula.

The Big Dipper and the rest of Ursa Major are circumpolar from most northern locations and can be seen throughout the year. They are particularly prominent in the evening sky in the months of spring.