Naos, Zeta Puppis (ζ Pup) is a hot blue supergiant located in the constellation Puppis. With an apparent magnitude of 2.25, it is the brightest star in Puppis. It lies at an approximate distance of 1,080 light years from Earth. Naos is the nearest class O star to the Sun and one of the most luminous stars visible to the unaided eye.

Naos has the stellar classification O4If(n)p, indicating a very young, hot, massive, exceptionally luminous supergiant star appearing blue in colour. The suffix “f” indicates emission lines of ionised helium and nitrogen in its spectrum, while the “n” stands for “nebulous” and refers to broadened absorption lines characteristic of fast spinning stars. Zeta Puppis is an exceptionally fast spinner, with a projected rotational velocity of over 220 km/s. The suffix “p” indicates a peculiar star. Naos is one of only eight known stars of this type in our galaxy. Most evolved hot stars tend to be relatively slow spinners.

Class O stars are quite rare. Our galaxy is believed to contain no more than 20,000 of them. These stars are quite massive (15 – 90 M☉ on the main sequence) and have mass loss rates of over a millionth solar masses per year. (In comparison, the Sun sheds 10 million times less over the same period.) Like other class O stars, Naos is losing mass through an exceptionally strong stellar wind. With an adopted radius of 18.4 solar radii, the terminal velocity of the wind is measured at 2,250 km/s.

Naos has a mass of 56.1 solar masses and a radius between 14 and 26 times that of the Sun. With a surface temperature of 40,000 K, it shines with 813,000 solar luminosities. However, because of its high temperature, the star emits most of its energy output in the invisible ultraviolet. Visually, it is still more than 10,000 times brighter than the Sun.

The star’s estimated age is only 3.2 million years. Even though it is very young, Naos has evolved quickly due to its high mass and will not have a very long life. When it comes to the end of its lifecycle, it will go out as a supernova.

Naos is classified as a suspected variable star of the Alpha Cygni type. Named after Deneb, Alpha Cygni, these stars are typically class A or B supergiants whose brightness varies by 0.1 magnitudes due to non-radial pulsations of their surfaces. (Some parts of their surfaces are expanding while others contract.) The Simbad database lists Naos as a BY Draconis-type variable, a star whose brightness varies by less than 0.5 magnitudes due to starspots coupled with the effect of rotation.

Naos once belonged to the constellation Argo Navis, a large southern constellation that represented the mythical ship Argo, on which Jason and the Argonauts sailed to Colchis on their quest to find the Golden Fleece. Naos marked the deck of Argo Navis. Argo Navis was divided into three smaller constellations – Carina, Vela and Puppis, representing the ship’s keel, sails and stern – by the French astronomer Nicolas Louis de Lacaille in the 18th century. However, Lacaille kept the same Bayer designations for the stars of the three constellations and, for this reason, Naos has the designation Zeta Puppis even though it is the brightest star in Puppis. It was the Zeta star of Argo Navis before the constellation was divided. The designations Alpha, Beta and Epsilon went to the brighter Carina stars Canopus, Miaplacidus, and Avior, while Gamma and Delta went to the Vela stars now known as Gamma Velorum (informally known as Regor) and Alsephina (Delta Velorum).

In 1974, the angular diameter of Naos was measured interferometrically at 0.41 milliarcseconds and, in 1983, photometric measurements gave a value of 0.38 milliarcseconds. The estimates of the star’s distance have ranged from about 300 parsecs based on parallax to 450 – 600 parsecs based on physical modelling. The value of 335 parsecs (1,093 light years) is derived from the 2007 Hipparcos reduction. The smaller distance implies a mass 22.5 times that of the Sun and a radius 14 times solar.

The uncertainty about the distance of Naos has led to different theories about the star’s origin. A 1996 study of four OB-associations and runaway stars that were possibly ejected from them suggested that Naos may have been a member of the Vela OB2 association and was ejected from the group about 1.2 million years ago. However, the study uses a larger distance for the star and the stars in the Vela OB2 group are considerably older than Naos.

A more recent study, published in 2008, suggested that Zeta Puppis was once a member of the open cluster Trumpler 10 and that it left it approximately 2.5 million years ago. However, the cluster is also much older than the star.

A study published in 2001 suggested that the path of Naos passed within less than 0.5 degrees of the expansion centre of the Gum Nebula about 1.5 million years ago, implying that it may have been the binary companion of the supernova progenitor. A 2009 study found no clear evidence that a binary companion of Naos was responsible for the expansion of cometary globules in the Gum Nebula. The Gum Nebula is a vast emission nebula stretching across 36 degrees of the sky in the constellations Puppis and Vela. It contains the Vela Supernova Remnant and Vela Pulsar, as well as the OB associations Trumpler 10 and Vela OB2. It was itself once widely believed to be the remnant of a supernova that occurred about a million years ago. However, more recent studies indicate that it is an evolved HII region.

The name Naos (pronunciation: /ˈneɪ.ɒs/) is derived from the Greek ναύς, meaning “ship.” It was approved by the International Astronomical Union’s (IAU) Working Group on Star Names (WGSN) on August 21, 2016.

In Arabic astronomy, the star was known as Suhail Hadar.

Naos lies in the southern sky. It can be found using the bright stars of Canis Major. It is the brightest star on an imaginary line drawn from Sirius between Wezen and Aludra. Sirius is easy to identify because it is the brightest star in the sky and has the three stars of Orion’s Belt – Alnitak, Alnilam and Mintaka – pointing at it, while Wezen and Aludra are part of a triangle of stars (along with Adhara) collectively known as “the Virgins,” located just under Sirius. 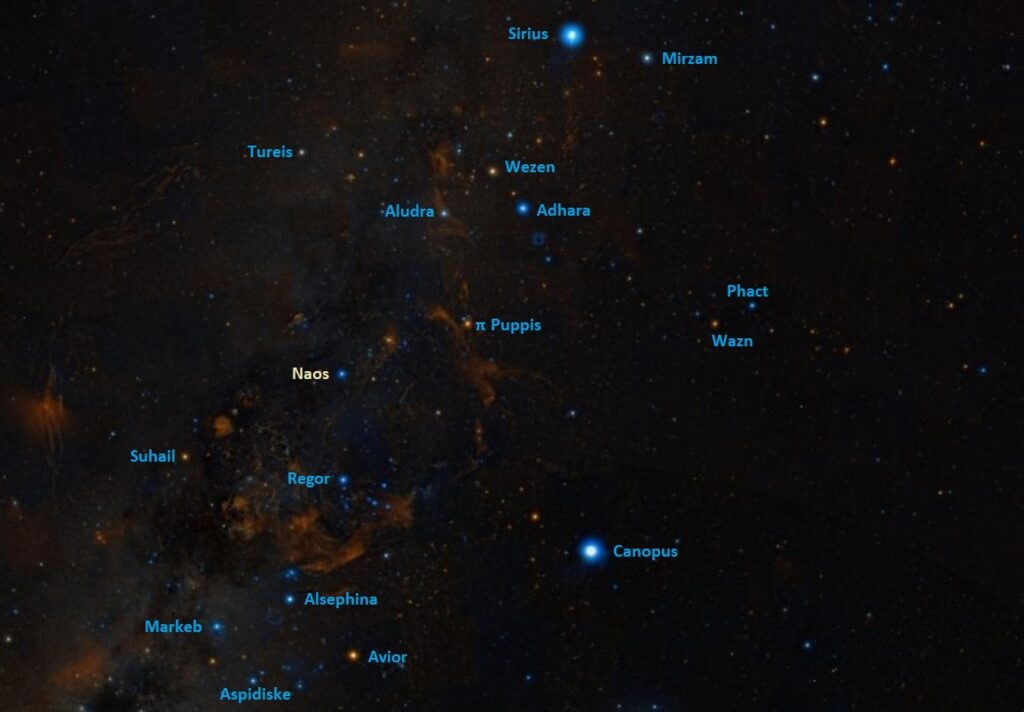 The best time of year to observe the stars and deep sky objects in Puppis is during the month of February, when the constellation is prominent in the evening sky. The entire constellation is visible between the latitudes 40° N and 90° S.