Menkalinan, Beta Aurigae (β Aur), is a binary star located in the constellation Auriga, the Charioteer. With a combined apparent magnitude of 1.90, it is the second brightest star in Auriga, after Capella. Menkalinan lies at a distance of 81.1 light years from Earth. It marks the shoulder of the celestial Charioteer.

The two components are so close together – about a fifth of the Sun-Mercury distance – that their shapes have been distorted by their gravitational interaction. As a result, the stars are distinctly egg-shaped. Beta Aurigae may in fact be a triple star system. A considerably dimmer candidate member lies at a separation of 13.9 arcseconds from the main pair.

The brightness of the Menkalinan system varies between magnitude 1.89 and 1.94 over a period of 3.96 days. The variations are due to one of the stars partially eclipsing the other every 47.5 hours as they orbit.

The system is classified as an Algol-type variable. The two components appear as a single star to the unaided eye, but their orbit plane is almost aligned with our line of sight and, as a result, they appear to eclipse each other as they orbit, causing the system’s brightness to vary slightly when seen from Earth. Algol in the constellation Perseus is the prototype for this class of variable stars. Other notable Algol-type binaries include Menkalinan’s neighbours Almaaz (Epsilon Aurigae) and Saclateni (Zeta Aurigae), as well as Deneb Algedi (Delta Capricorni), Eta Orionis, Delta Librae, Polis (Mu Sagittarii), Wurren (Zeta Phoenicis), and VV Cephei.

Menkalinan is among the 50 brightest stars in the sky. With an apparent magnitude of 1.90, it is only slightly brighter than Atria in the constellation Triangulum Australe, Alhena in Gemini, and Peacock in Pavo, but (just barely) outshined by Avior in Carina, Sargas in Scorpius, and Alkaid in Ursa Major.

Menkalinan will be the brightest star in the sky in 990,000 years and it will be succeeded by Delta Scuti in 1,150,000 years. At its brightest, Menkalinan will shine at magnitude -0.40, when it comes within 28.5 light years of the Sun. It will be considerably fainter than Sirius (mag. -1.46), which will remain the brightest star for another 210,000 years and be replaced by Vega. Vega will hold the title until 480,000 years from now and be succeeded by Canopus, and Auriga’s luminary will be dethroned by Menkalinan in 990,000 years.

Menkalinan is believed to be a member of the Ursa Major Moving Group, a group of stars thought to have formed in the same stellar nursery because they have common velocities in space. Most of the brightest stars of Ursa Major belong to the core group, while Menkalinan is one of the outlying members, along with Alphecca in the constellation Corona Borealis, Adhafera in Leo, Beta Serpentis in Serpens, Skat in Aquarius, and Gamma Leporis in Lepus.

Menkalinan was memorably used in the novel Wheelworld (1981) by Harry Harrison, as well as in “Turnabout Intruder,” the final episode of Star Trek: The Original Series.

The name Menkalinan (pronunciation: /mɛŋˈkælɪnæn/) comes from the Arabic phrase mankib ðī-l-‘inān, meaning “the shoulder of the rein-holder.” The constellation Auriga, the Charioteer, is associated with the mythical Erichthonius, the inventor of the quadriga, the four-horse chariot, who often competed as a chariot driver. It is said that he impressed Zeus with his mastery so much that the god turned him into a constellation after his passing.

The name Menkalinan was officially approved by the International Astronomical Union’s (IAU) Working Group on Star Names (WGSN) on July 20, 2016. It formally applies only to the component Beta Aurigae A.

Menkalinan is relatively easy to find because it is located just east of Capella, the sixth brightest star in the sky, and marks one of the vertices of Auriga’s pentagon asterism. The stars lie in the same region of the sky as two of the most recognizable features of the night sky: the hourglass-shaped Orion constellation and the Pleiades, an exceptionally bright open star cluster. Capella is easy to locate because it is also part of the Winter Hexagon, a prominent asterism that dominates the northern winter sky, also formed by the bright Sirius in the constellation Canis Major, Procyon in Canis Minor, Pollux in Gemini, Aldebaran in Taurus, and Rigel in Orion. 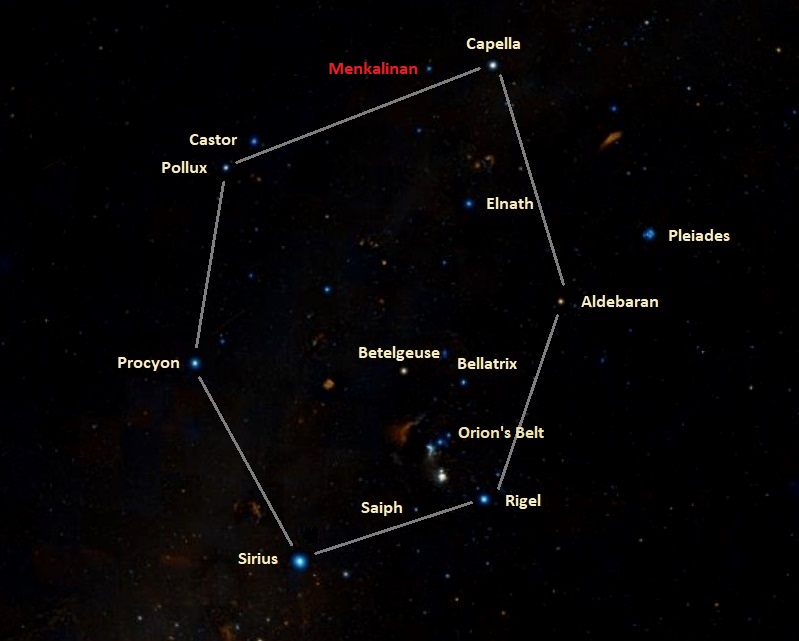 Menkalinan is located in the constellation Auriga. Auriga is one of the larger constellations, stretching across 657 degrees of the northern sky. It is one of the Greek constellations, known since ancient times and first listed by Ptolemy of Alexandria in the 2nd century CE. Auriga is best known for being home to the bright Capella and three open clusters catalogued by the French astronomer and comet hunter Charles Messier: Messier 36, Messier 37, and Messier 38. The best time of year to observe the stars and deep sky objects in the constellation is during the month of February.