Izar, Epsilon Boötis (ε Boo), is a contrasting binary star located in the constellation Boötes. It is one of the finest double stars to observe in a telescope. Izar lies at an approximate distance of 203 light years from Earth. It is one of the stars that form the constellation’s recognizable Kite asterism. With an apparent magnitude of 2.37, it is the second brightest star in Boötes, after Arcturus.

The Epsilon Boötis star system consists of an orange giant or bright giant of the spectral type K0 II-III and a blue-white main sequence star with the stellar classification A2 V. The stars are separated by 2.852 ± 0.014 seconds of arc which, at a distance of 203 light years, gives a projected separation of 185 astronomical units. The two components orbit each other with a period of at least 1,000 years.

The primary star, designated Epsilon Boötis A, has an apparent magnitude of 2.37, while the main sequence companion, Epsilon Boötis B, has a magnitude of 5.12. The star system is visible to the unaided eye, but it appears as a single star. The two components can only be resolved in 3-inch or larger telescopes.

Epsilon Boötis A is a relatively young star, with an estimated age of 37.4 million years, but it has already reached a late stage of its life cycle. It has burned through its supply of hydrogen and started fusing helium to carbon in its core. It has expanded to a size about 33 times that of the Sun. With a surface temperature of 4,550 K, it shines with 501 solar luminosities. Its estimated mass is 4.6 times solar.

The companion is at a less advanced phase of its evolutionary cycle. It is a hydrogen-fusing dwarf about twice the size of the Sun, shining with about 27 solar luminosities. It has an estimated surface temperature of 8,700 K. The star is a very fast spinner, with a projected rotational velocity of 123 km/s. By the time it reaches the primary component’s current stage, in a little over a billion years, the larger star will have ejected its outer layers to form a planetary nebula, leaving behind a faint white dwarf. At this point, Epsilon Boötis B will be the brighter of the two stars.

Izar was put in the spotlight when it became part of an alien mystery in the 1970s. In an article published in Spaceflight in 1973, Scottish science fiction author and astronomer Duncan Lunan claimed that he had identified and interpreted a hidden radio message that came from a 10,000 year old alien space probe sent by the inhabitants of a planet in the Epsilon Boötis system (“the sixth planet of seven”). The message, he said, had been overlooked by a team of Norwegian and Dutch researchers in the 1920s. The story caused quite a stir and was even reported in Time and on the CBS Evening News. Lunan withdrew his theory in 1976, presenting evidence against it after it had already been refuted, but he later revoked the withdrawal, too. The story partly inspired German author Mark Brandis’ 1974 novel Raumsonde Epsilon (Spaceprobe Epsilon).

The name Izar (pronunciation: /ˈaɪzɑːr/) comes from the Arabic izār, meaning “veil.” The name formally applies only to Epsilon Boötis A, but is commonly used for the whole star system. It was officially approved by the International Astronomical Union’s (IAU) Working Group on Star Names (WGSN) on August 21, 2016.

Epsilon Boötis had several other traditional names. These include Mizar, which has the same etymology as Izar, and Mirak, which is derived from the Arabic al-maraqq, meaning “the loins.” (Mizar in Ursa Major marks the loins of the Great Bear.) All three names refer to the star’s position in Boötes, marking the celestial Herdsman’s loin cloth.

In the 17th century, Egyptian astronomer Al Achsasi Al Mouakket listed the star as Mintek al Aoua, meaning “belt of the barker” or “belt of the shouter,” in his Calendarium. The name was later translated into Latin as Cingulum Latratoris.

The Chinese know the star as 梗河一 (Gěng Hé yī), or the First Star of Celestial Lance. Celestial Lance is a Chinese asterism formed by Izar with Sigma and Rho Boötis. The asterism is part of the Chinese Root mansion, which represents the chest of the Azure Dragon.

Izar is relatively easy to find because it is one of the bright stars that form the kite-shaped pattern of Boötes. The constellation is easy to identify under clear, dark skies because it lies next to the semi-circle of stars of Corona Borealis, and its brightest star, Arcturus, can be found by following the arc of the Big Dipper’s handle. Izar lies northeast (left) of Arcturus. It is the brightest star in the region of the sky between Arcturus and Corona Borealis. It is a popular target for stargazers, mainly for the striking colour contrast between its two components. 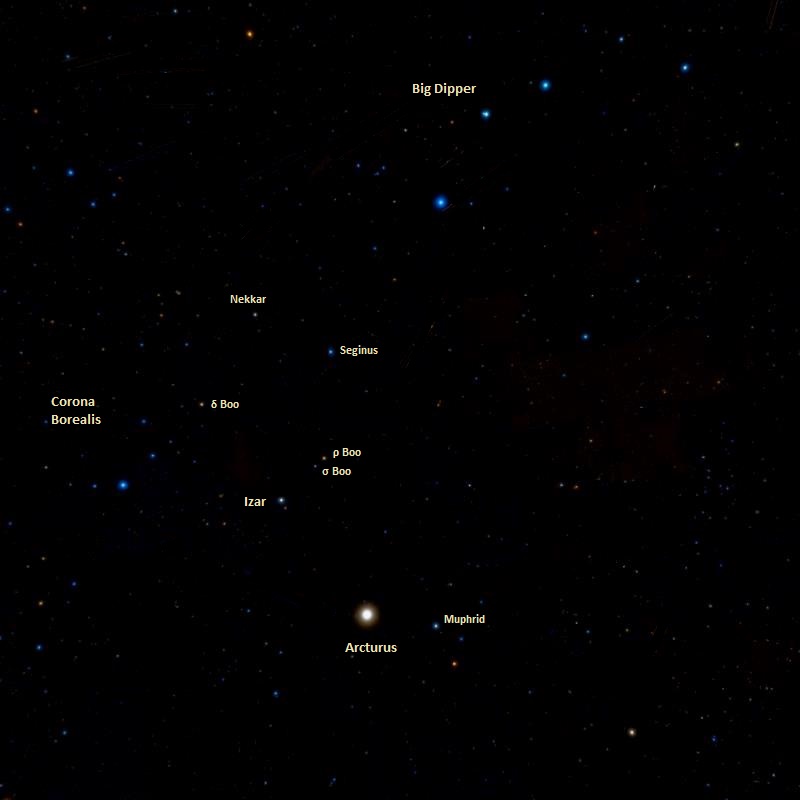 Izar is located in the constellation Boötes. It marks the Herdsman’s waist cloth.

Boötes is one of the largest northern constellations, stretching across an area of 907 square degrees. The first known written mention of its name was found in Homer’s Odyssey, but the constellation itself has been known for much longer. Other than Izar, Boötes contains several popular telescope targets. These include the multiple star Alkalurops (Mu Boötis), the spiral galaxies NGC 5248 and NGC 5676, the lenticular galaxy NGC 5548, and the globular cluster NGC 5466.

The best time of year to observe the stars and deep sky objects in Boötes is during the month of June, when the constellation is particularly prominent in the evening sky.