Sabik, Eta Ophiuchi (η Oph), is a binary star system composed of two white subgiant stars located in the constellation Ophiuchus. With a combined apparent magnitude of 2.43, it is the second brightest point of light in the constellation, after Rasalhague. Sabik lies at an approximate distance of 88 light years from Earth. It marks the right knee of Ophiuchus, the celestial serpent bearer.

Eta Ophiuchi consists of two white stars of the spectral type A1 IV with a total mass of about 6.09 solar masses. Eta Ophiuchi A has 2.966 solar masses, while Eta Ophiuchi B has 3.478 solar masses. Individually, the stars have apparent magnitudes of 3.05 and 3.27. They orbit each other with a period of 87.58 years and an eccentricity of 0.950. The highly eccentric orbit makes it very unlikely for any planets to form in the system. The stars come within 2 astronomical units of each other (two Earth-Sun distances) and drift as far apart as 65 astronomical units. The angular size of their orbit is only 1.396 arcseconds, which translates into an average physical distance of about 33.5 astronomical units.

Sabik and the brighter Rasalhague are among the 58 stars that have a special status in the field of celestial navigation. The two stars are part of a group of 13 equatorial navigational stars of the western hemisphere. Other navigational stars in this group are Gienah in the constellation Corvus, Altair in Aquila, Fomalhaut in Piscis Austrinus, Arcturus in Boötes, Antares in Scorpius, Nunki in Sagittarius, Alphecca in Corona Borealis, Spica in Virgo, Zubenelgenubi in Libra, and Markab and Enif in Pegasus.

On average, Sabik is the 86th brightest star in the sky. It is only slightly fainter than Enif in the constellation Pegasus, Kappa Scorpii (Girtab) in Scorpius, and Ankaa in Phoenix. It is about as bright as Phecda in Ursa Major and Scheat in Pegasus and it just outshines Aludra in Canis Major, Alderamin in Cepheus, Markeb in Vela, and Gienah in Corvus.

The name Sabik (pronunciation: /ˈseɪbɪk/) is derived from the Arabic al-sābiq, meaning “the preceding one.” It is unclear what the name refers to.

The name was approved by the International Astronomical Union’s (IAU) Working Group on Star Names (WGSN) on August 21, 2016. It formally applies only to the component Eta Ophiuchi A.

Sabik lies close to the celestial equator and can be seen from most locations on Earth for at least a part of the year. It is relatively easy to find because it is located in the same area of the sky as two conspicuous southern asterisms, the Teapot, formed by the brightest stars of Sagittarius, and the claws of Scorpius. Sabik is found to the north-northeast of Antares and just west of the imaginary line extended from Kaus Australis (Epsilon Sagittarii), the brightest star in Sagittarius, through the fainter Alnasl (Gamma2 Sagittarii), the star that marks the tip of the Teapot’s spout. 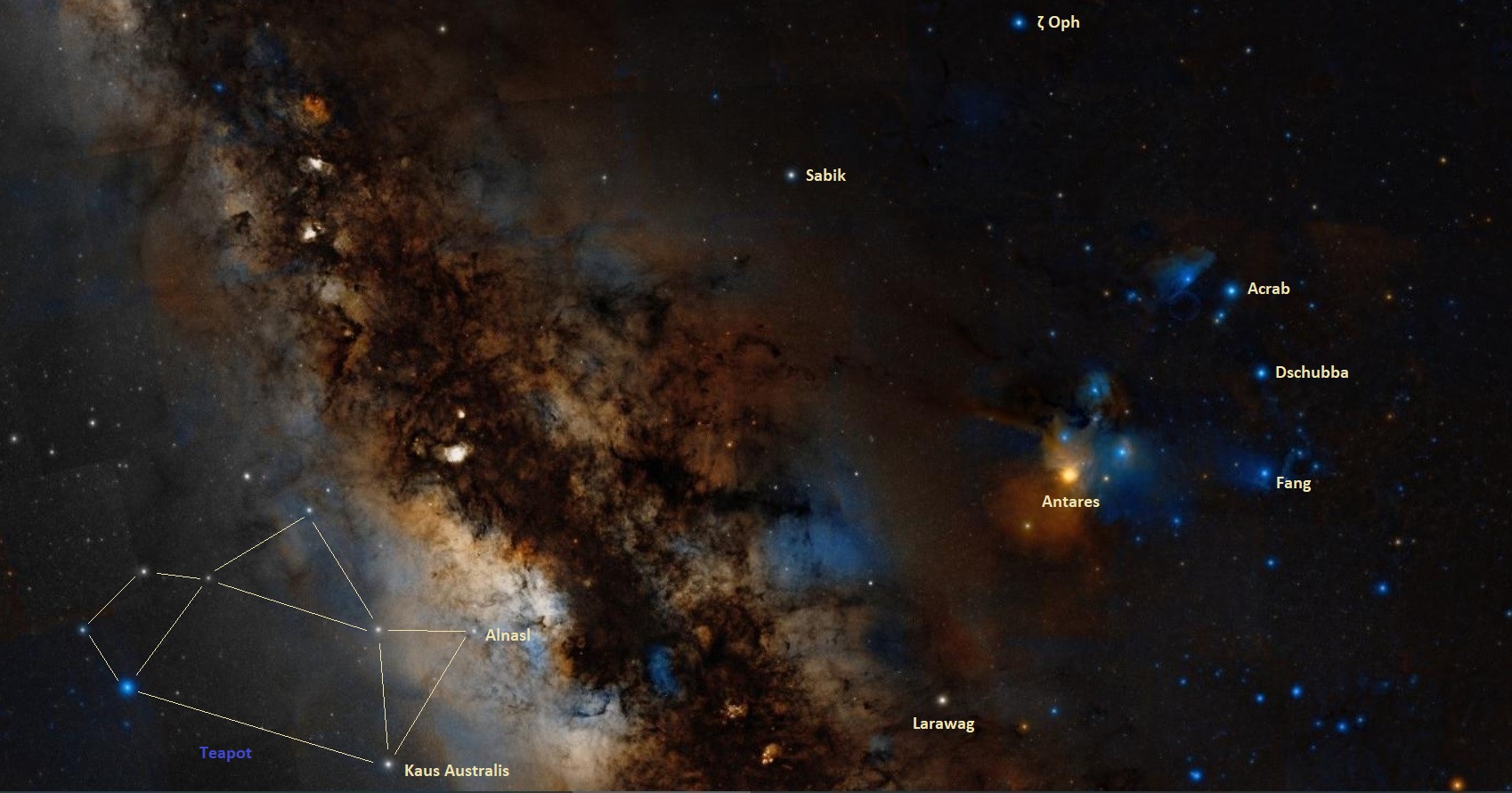 Sabik can be used to find several bright deep sky objects that lie in the same area of the sky. The globular cluster Messier 9 appears about 3 degrees southeast of the star. It has an apparent magnitude of 7.9 and occupies 9.3’ of the sky. It can be observed in a small telescope. 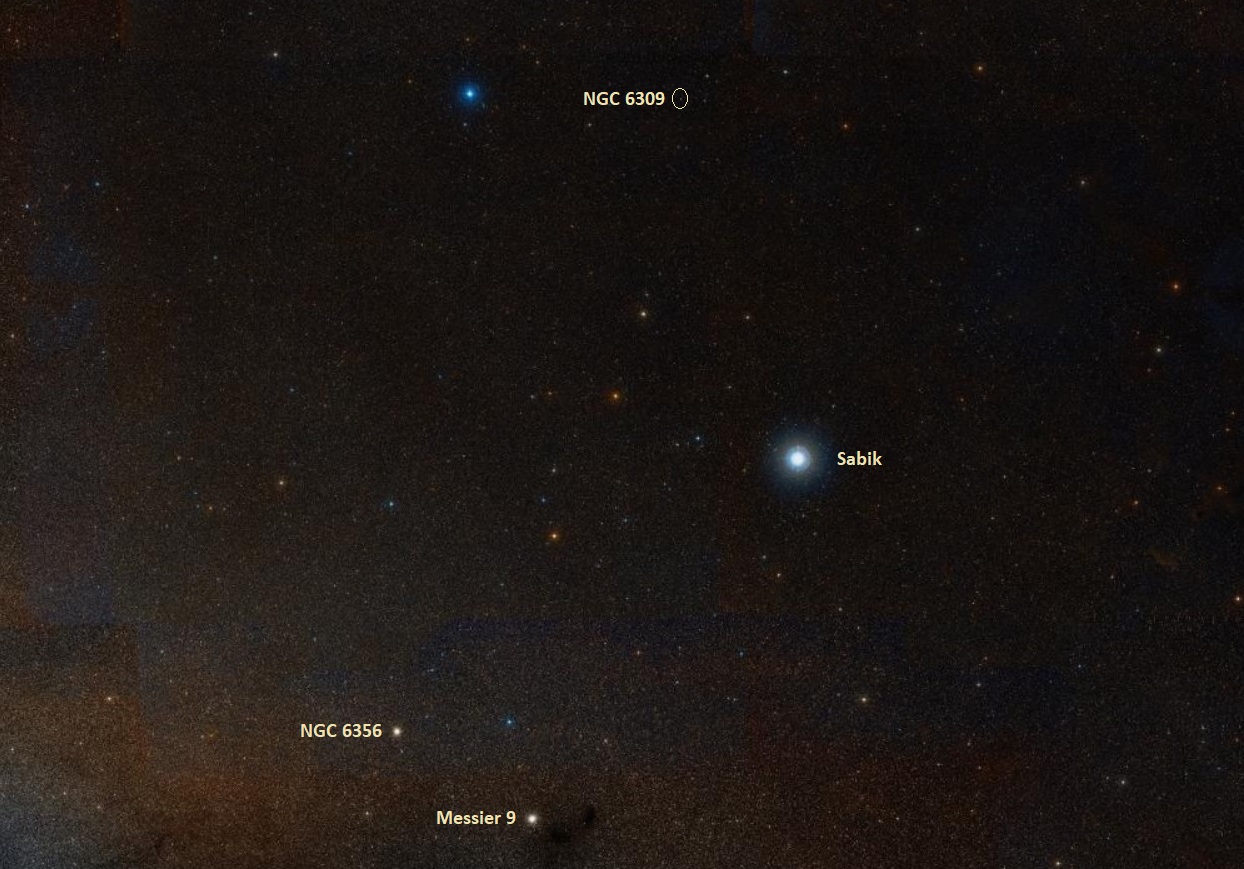 The globular cluster NGC 6356 lies only 80’ northeast of M9. With a visual magnitude of 8.2, it is slightly fainter than its neighbour.

The Box Nebula (NGC 6309), a quadrupolar planetary nebula, appears less than 3 degrees north and a little east of Sabik. It has an apparent magnitude of 11.5. Ophiuchus is the 11th largest of the 88 constellations, occupying an area of 948 square degrees. It does not contain any first-magnitude stars that would make it particularly prominent, but with five stars brighter than magnitude 3.00, it is fairly noticeable on a clear night. The constellation’s brightest star, Rasalhague, has a visual magnitude of 2.08.

Ophiuchus is rich in interesting stars and bright deep sky objects. It is home to Barnard’s Star, the fourth closest individual star to the Sun (after the three components of the Alpha Centauri system) at 5.958 light years, the nearby red dwarf Wolf 1061, which hosts three confirmed exoplanets, the recurrent nova system RS Ophiuchi, the massive blue star Zeta Ophiuchi, and Rho Ophiuchi, a multiple star system embedded in one of the nearest star-forming nebulae to the Sun. The constellation also contains Kepler’s Supernova (SN 1604), the remnant of a Type Ia supernova observed in 1604.

The best time of year to see the stars and deep sky objects in Ophiuchus is during the month of July, when the constellation rises high in the evening sky. The entire constellation is visible from locations between the latitudes 80° N and -80° S.