Aludra, Eta Canis Majoris (η CMa) is a blue supergiant located in the constellation Canis Major. It marks the Greater Dog’s tail. With an apparent magnitude of 2.451, it is the fifth brightest star in the constellation, after Sirius, Adhara, Wezen, and Mirzam. Aludra lies at an approximate distance of 2,000 light years from Earth.

Aludra has the stellar classification B5 Ia, indicating a bright supergiant star appearing blue or blue-white in colour. The star has a mass 19.19 times that of the Sun and has expanded to a size of 56.3 solar radii. With an effective temperature of 15,000 K, it shines with 105,442 solar luminosities.

With a mass of 19.19 solar masses, Aludra is certain to end its life in a supernova blast. Even though it is still a young star, it has evolved quickly due to its high mass and is now probably on its way to becoming a red supergiant before it meets its end within the next few million years.

Eta Canis Majoris is classified as an Alpha Cygni variable. Named after Deneb (Alpha Cygni), the prototype for this class, Alpha Cygni variables exhibit variations in brightness due to non-radial pulsations, which means that some parts of their surfaces are expanding while others contract. Other stars of this type include Rigel and Alnilam in the constellation Orion, Rho Leonis in Leo, Kappa Cassiopeiae in Cassiopeia, and Aludra’s Canis Major neighbour Omicron2 Canis Majoris.

The brightness variations in Alpha Cygni stars typically have small amplitudes and appear irregular, with multiple pulsation periods of a few days to a few weeks. The brightness of Aludra varies from magnitude 2.38 to 2.48 over a period of 4.70433 days.

On average, Aludra is the 88th brightest star in the sky. It is only slightly fainter than Ankaa in the constellation Phoenix, Phecda in Ursa Major, Sabik in Ophiuchus, and Scheat in Pegasus. It just outshines Alderamin in Cepheus, Markeb in Vela, Gienah in Corvus, and Markab in Pegasus.

Even though it is only the fifth brightest star in Canis Major, Aludra is much more intrinsically luminous than its brighter neighbours, but being so distant, it appears fainter. It is 105,442 times more luminous than the Sun, while Sirius shines with 25.4 L☉, Adhara with 38,700 L☉, Wezen with 82,000 L☉, and Mirzam with 26,600 L☉. 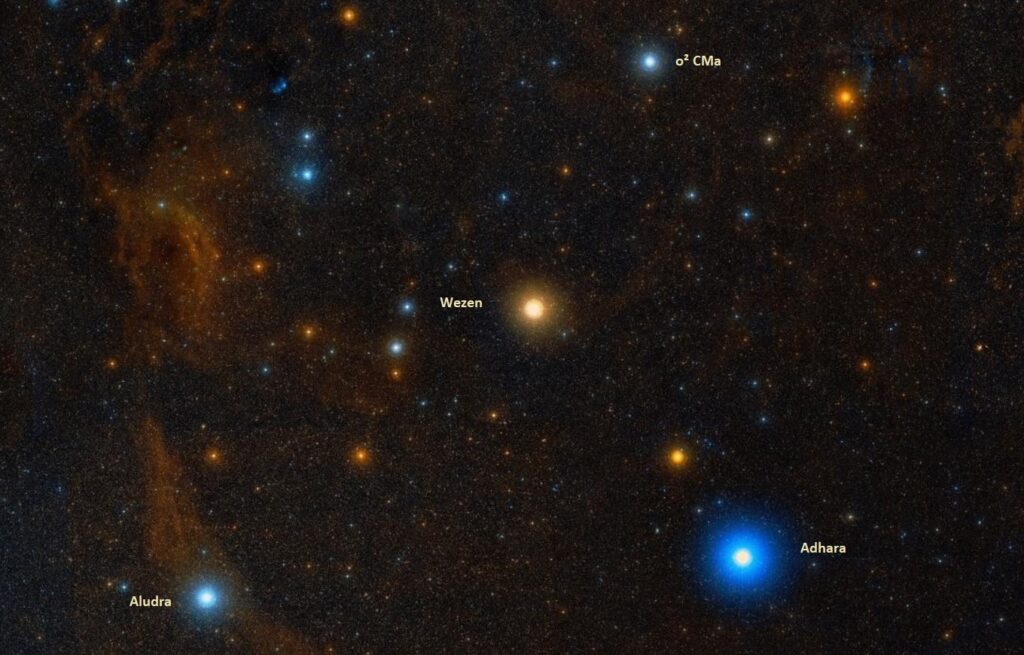 The name Aludra was approved by the International Astronomical Union’s (IAU) Working Group on Star Names (WGSN) on July 20, 2016.

Aludra is very easy to find because it lies near Sirius, the brightest star in the sky, and forms a distinct triangle with two other bright stars, Adhara and Wezen. The triangle lies south-southeast of Sirius. Sirius can be found by extending an imaginary line from the three stars of Orion’s Belt – Mintaka, Alnilam and Alnitak – to the southeast. Both Aludra and the brighter Wezen appear on the imaginary line extended from Betelgeuse in Orion through Sirius. Aludra is the faintest of the three stars that form the triangle asterism. 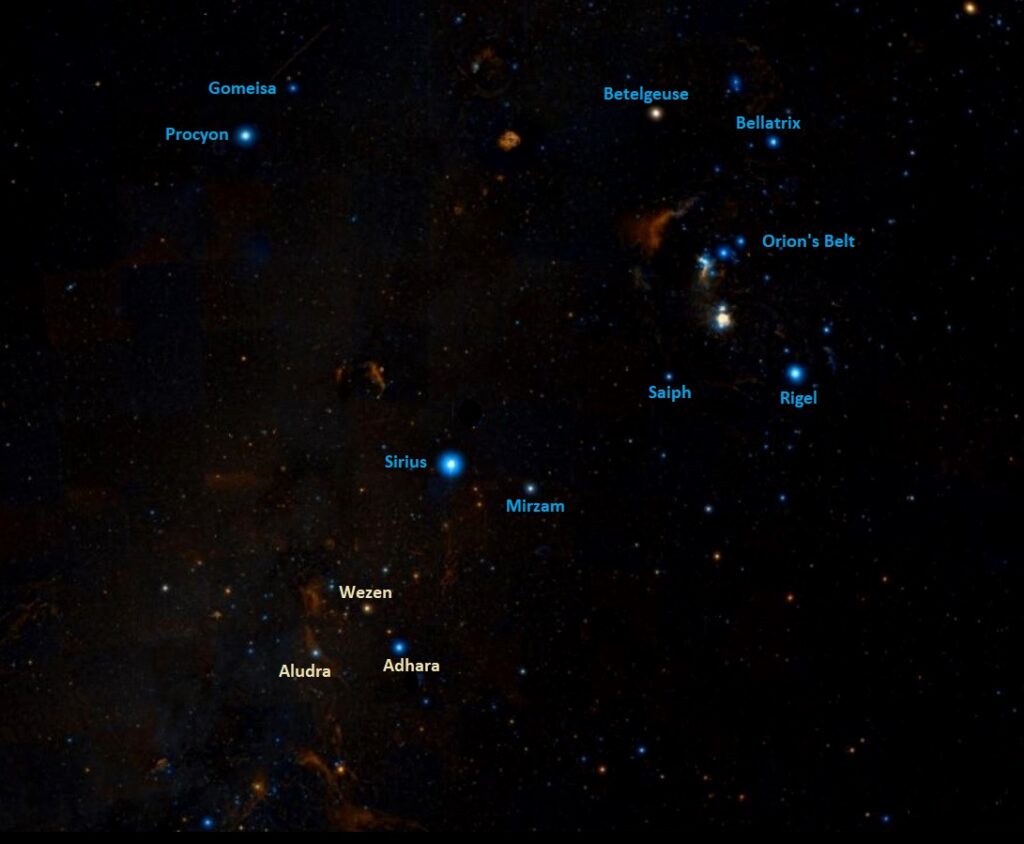 Aludra can be used to find several relatively bright deep sky objects that lie in the same area of the sky. The open cluster Collinder 140 appears south of the star. With an apparent magnitude of 3.5, it is visible to the unaided eye on a clear night. It stretches across 60’ of the sky and, at a distance of 1,226 light years, it is closer to us than Aludra. Collinder 132, another open cluster, can be seen southwest of the star. It is slightly fainter than Collinder 140, at magnitude 3.60.

Southeast of Aludra, the open cluster NGC 2439 occupies 10’’ of the sky. With an apparent magnitude of 6.9, it is visible in binoculars. It lies in the neighbouring constellation Puppis. The open clusters NGC 2453 and NGC 2489, and the star-forming region NGC 2467, popularly known as the Skull and Crossbones Nebula, are a bit further away. 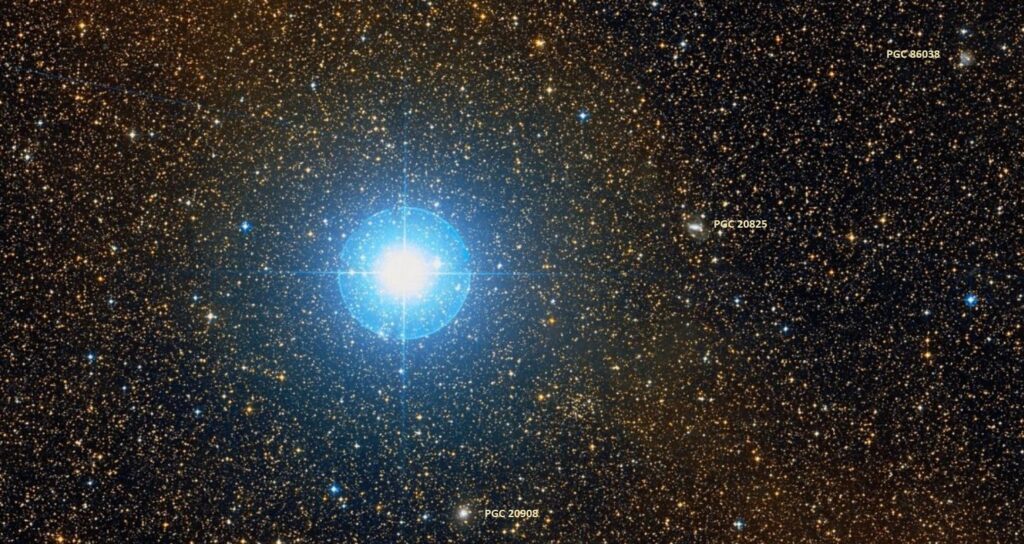 Other bright deep sky objects in the constellation include the open clusters Messier 41 and NGC 2360 (Caroline’s Cluster), the emission nebula NGC 2359, also known as Thor’s Helmet Nebula, the Canis Major Dwarf galaxy, the nearest satellite of the Milky Way to the Sun, and the interacting galaxies NGC 2207 and IC 2163.

The best time of year to observe the stars and deep sky objects of Canis Major is during the month of February, when the constellation is prominent in the evening sky. The entire constellation is visible from locations between the latitudes 60° N and 90° S.