Enif, Epsilon Pegasi (ε Peg) is an orange supergiant star located in the constellation Pegasus. It marks the muzzle of the mythical winged horse. With an average apparent magnitude of 2.399, Enif is the brightest star in Pegasus. It lies at an approximate distance of 690 light years from Earth.

Enif has the stellar classification K2 Ib, indicating a supergiant star appearing orange in colour. The star has a mass about 11.7 times that of the Sun and a radius 185 times solar. If placed at the centre of the solar system, it would extend between the orbits of Venus (154 – 157 R☉) and Earth (211 – 219 R☉).

Enif has a projected rotational velocity of 8 km/s. Its estimated age is about 20 million years. Even though it is a young star, it will reach the end of its life cycle in the next few million years. It may be massive enough to be a supernova candidate, but it may also end its life as a neon-oxygen white dwarf. The star is classified as a slow irregular variable (type LC). Its brightness varies from magnitude 0.7 to 3.5.

Enif has also shown dramatic changes in brightness on several occasions. In 1972, it briefly appeared as bright as Altair only to fade again 10 minutes later. Such superflares are exceptionally rare and their mechanism is not yet understood.

A 2010 study of young runaway stars revealed that Enif has a relatively high peculiar velocity (velocity relative to the surrounding interstellar medium) of 21.6 km/s-1.

Enif is believed to have formed in the same molecular cloud as the nearby yellow supergiants Sadalsuud (Beta Aquarii) and Sadalmelik (Alpha Aquarii), the brightest stars in the constellation Aquarius. The three stars lie at similar distances and share a space velocity that is taking them perpendicular to the Galactic plane. Sadalsuud is a supergiant of the spectral type G0 Ib located about 540 light years away, and Sadalmelik has the stellar classification G2 Ib and lies at a distance of 520 light years.

Enif is one of the 58 stars selected for navigation. Navigational stars have a special role in the field of celestial navigation because they are some of the brightest and most recognizable stars in the sky. The only other navigational star in Pegasus is Markab, Alpha Pegasi, one of the stars that form the Great Square of Pegasus. 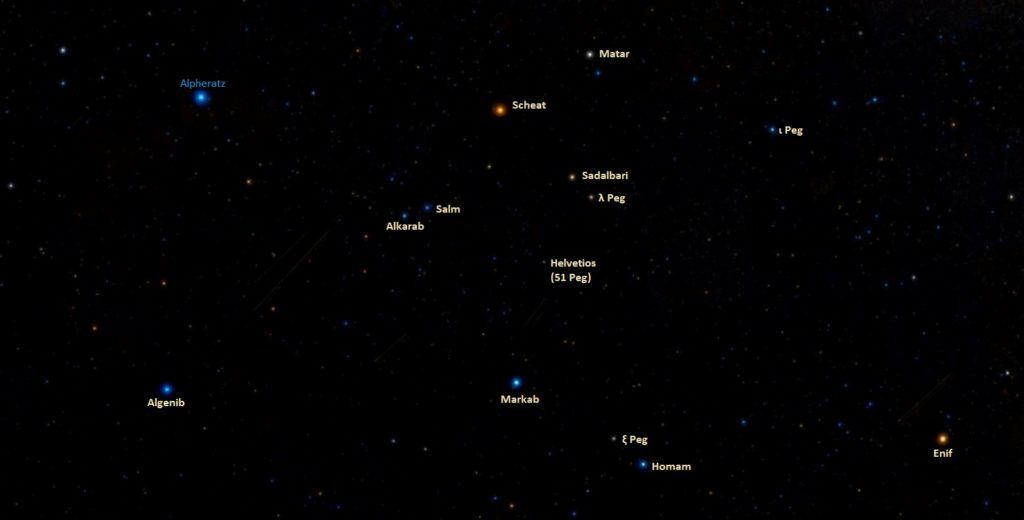 Enif has two visual companions. One has an apparent magnitude of 12.80 and is separated by 83.2 arcseconds from the supergiant and the other is brighter, at magnitude 8.74, and located 144.6 arcseconds away. The stars do not share a common proper motion with Enif and are not physically related to the supergiant.

Enif is unofficially known as the Pendulum Star. The supergiant and the companion at a separation of 144.6 arcseconds are an example of the Pulfrich effect, a phenomenon that occurs when lateral movement of an object in a field of view is “seen” as having a depth component – appearing to approach and recede – when it is viewed with both eyes. The optical illusion is the result of the difference in signal timings between the eyes. If Enif and the companion star are observed in a telescope at a magnification of 60 to 100 and the telescope is lightly tapped so that the stars appear to move at right angles to the imaginary line connecting them, Enif appears to move up and down, as expected, while the companion appears to wildly bounce around to and fro. The pendulum-like oscillations are due to the fact that the companion is much fainter and it takes longer for its light to stimulate the retina. English astronomer John Herschel (1792 – 1871), who noted the phenomenon, suggested that the companion appears to traverse a larger arc when the telescope is tapped because it takes more time for its light to affect the eye and “the reversal of motion is first perceived in the larger object.”

The name Enif (pronunciation: /ˈiːnɪf/) comes from the Arabic word for “nose.” It refers to the star’s position in the constellation, marking the muzzle of Pegasus. The star was also known as Fum al Faras, meaning “the horse’s mouth,” and as Al Jahfalah, “the lip.” The former was translated into Latin as Os Equi.

The Chinese know Epsilon Pegasi as 危宿三 (Wēi Sù sān), the Third Star of Rooftop. The Chinese Rooftop asterism is formed by Enif with Sadalmelik (Alpha Aquarii) and Biham (Theta Pegasi). It is one of the seven mansions of the Black Tortoise.

Enif is easy to find because it lies next to the Great Square of Pegasus, a conspicuous asterism outlining the main body of Pegasus. The star can be found in the area between Markab, the star at the southwest corner of the Great Square, and the constellation Delphinus, recognizable for its prominent kite-shaped pattern. Enif is the brightest star in this region of the sky.

Enif is located just over three degrees southeast of Messier 15, also known as the Great Pegasus Cluster. The globular cluster is one of the brightest (mag. 6.2), densest and oldest clusters of its kind in the Milky Way. It lies 33,600 light years away and is 12 billion years old. 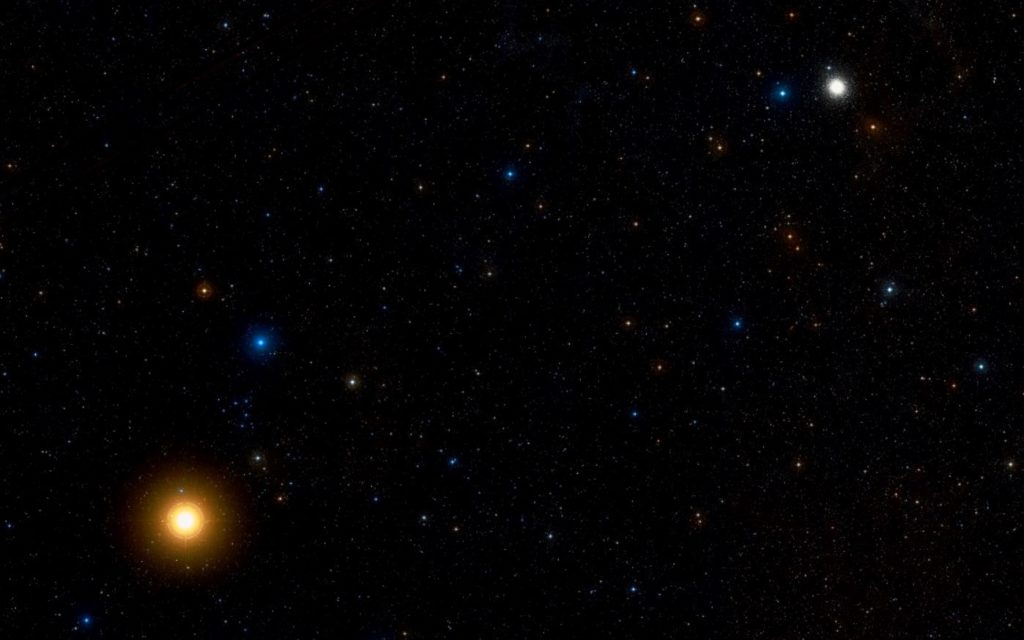 Enif is located in the constellation Pegasus. Pegasus is the third largest northern constellation and the seventh largest of all 88 constellations. It occupies 1,121 square degrees of the northern sky. Representing the winged horse from Greek mythology, it is one of the 48 Greek constellations, first listed by the astronomer Claudius Ptolemy in the 2nd century CE. The constellation is dominated by the Great Square of Pegasus, a prominent asterism formed by three Pegasus stars – Algenib, Scheat and Markab – with Alpheratz, the brightest star in the neighbouring Andromeda.

Pegasus is also home to about a dozen star systems with confirmed exoplanets. These include 51 Pegasi, the first Sun-like star discovered to have a planet orbiting it.

The best time of year to observe the stars and deep sky objects in Pegasus is during the month of October.