Meissa, Lambda Orionis (λ Ori), is the star that marks the head of Orion, the Hunter. It is a multiple star system with a combined apparent magnitude of 3.33, located at an approximate distance of 1,100 light years from Earth.

Meissa is the 11th brightest star in Orion. It is slightly fainter than the multiple star Eta Orionis and a little brighter than the class B giant Tau Orionis. It does not make the list of the 200 brightest stars in the sky.

The Lambda Orionis system is composed of a luminous blue giant star of the spectral type O8 III and a blue-white main sequence star with the stellar classification B0.5 V. Lambda Orionis A is the brighter component, with an apparent magnitude of 3.54. The star has a mass 27.9 times that of the Sun and a radius 10 times solar. With a temperature of about 37,689 K, it shines with a luminosity 165,000 times that of the Sun. A lot of its energy output is in the invisible ultraviolet part of the spectrum. The star is a soft X-ray emitter, which indicates that it has a stellar wind. Like other massive stars, it will end its life as a supernova. 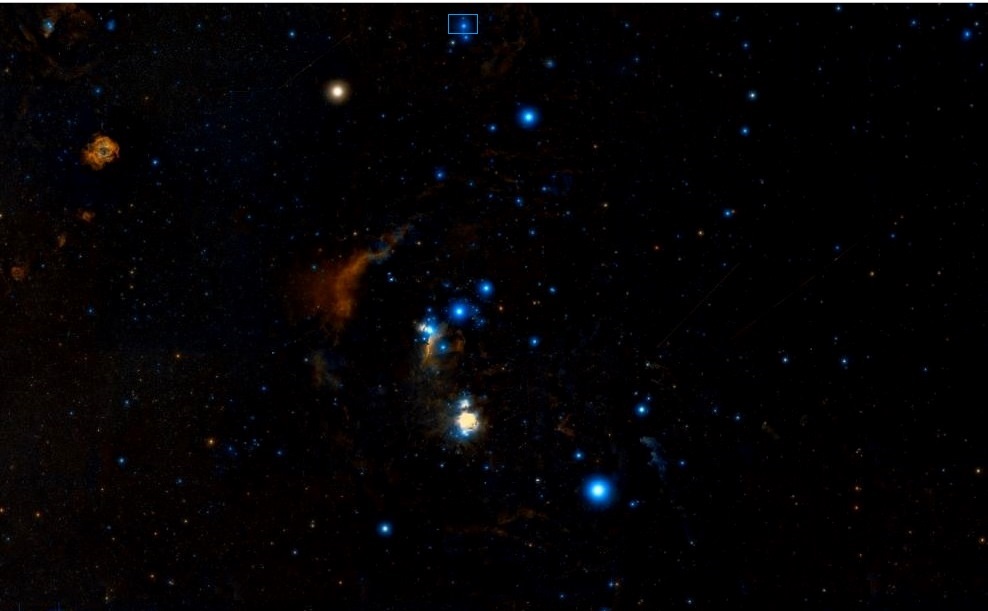 The companion, Lambda Orionis B, is separated from the primary star by 4.41 arcseconds. It is considerably fainter, with a visual magnitude of 5.61, but also quite hot and luminous. The star has an estimated temperature of 25,400 K and shines with 6,300 solar luminosities. It has a mass about 10 times that of the Sun and radius 4.2 times solar.

There is a third, more distant component of the spectral type F8 V. It is a main sequence star that may have a brown dwarf companion. Meissa is the brightest member of a young cluster known as the Lambda Orionis Cluster. It ionizes a large nebula that surrounds it. The cluster can be seen in binoculars and small telescopes, while the nebula is only visible photographically.

The Lambda Orionis Ring, sometimes known as the Angelfish Nebula and catalogued as Sharpless 264 (Sh2-264), is a large nebulous region that surrounds Meissa. The H II region is about 150 light years or over 10 degrees across and illuminated by the ultraviolet light from Meissa and other hot stars in the vicinity. Lying in the northern part of the Orion Molecular Cloud Complex, the nebula can only be seen in long-exposure images. It is not visible in binoculars or small telescopes. 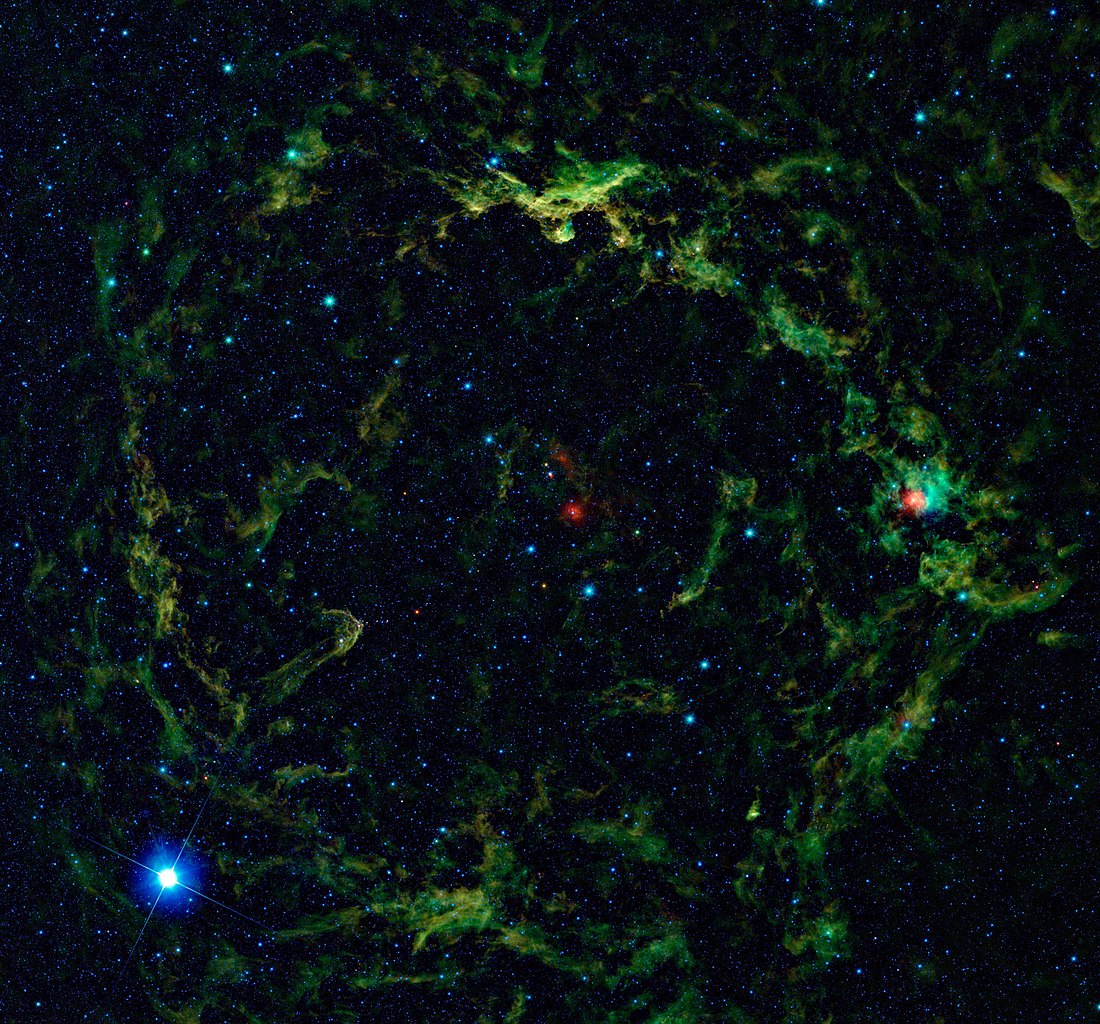 The head (Meissa) and shoulders (Betelgeuse and Bellatrix) of the constellation Orion with surrounding nebulas as depicted in infrared, image: NASA

The Lambda Orionis nebula is surrounded by an expanding gaseous ring with an estimated age between 2 and 6 million years. The expansion of the cool gas indicates that the ring may be a remnant of a Type II supernova, an event that ended the life of a star that was Meissa’s companion. It is also possible that the ring is composed of material in which Meissa was formed, which has been compressed by the star. 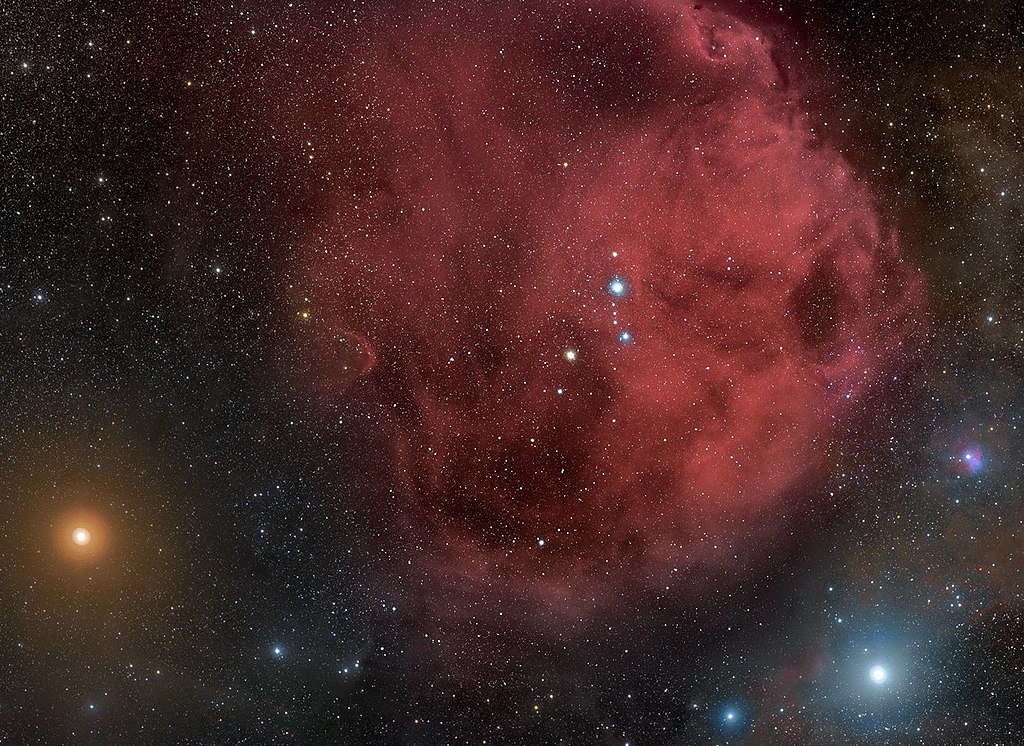 Meissa is the central member of the open star cluster Collinder 69, also known as the Lambda Orionis Cluster or Lambda Orionis Association. The cluster is composed of fourth and fifth magnitude stars which can be seen in binoculars, but are also visible to the unaided eye. The cluster is surrounded by nebulosity which stretches for several hundred light years.

Meissa is the star’s traditional name. It comes from the Arabic Al-Maisan, meaning “the shining one.” The Arabic name was originally used for Alhena (Gamma Geminorum) in the constellation Gemini, but was applied to Lambda Orionis by mistake and it stuck.

The name Meissa formally applies only to the component Lambda Orionis A. It was officially approved by the International Astronomical Union’s (IAU) Working Group on Star Names (WGSN) on July 20, 2016.

Lambda Orionis was also once known as Heka, from the Arabic Al Haḳʽah, meaning “a white spot.” The name refers to the lunar mansion in Arabic astronomy that included Lambda Orionis, Phi1 Orionis and Phi2 Orionis.

The Chinese also grouped these three stars together in an asterism called 觜宿 (Zī Sù), or Turtle Beak. Meissa is known as the First Star of the Turtle Beak (觜宿一).

Meissa is very easy to find as it sits just above the hourglass shape of Orion, forming a triangle with the bright Betelgeuse and Bellatrix, which mark the Hunter’s shoulders.

Meissa is located in the same region of the sky as several interesting deep sky objects. These include the planetary nebula NGC 2022, located about a third of the way from Meissa to Betelgeuse, two large H II regions in the neighbouring Monoceros constellation – the Rosette Nebula and the Cone Nebula with the Christmas Tree Cluster – the reflection nebula IC 2169 (Dreyer’s Nebula), and the Monkey Head Nebula (NGC 2174), an emission nebula in Orion. The famous Crab Nebula (Messier 1) is a bit further away, near the magnitude 3.0 star Zeta Tauri (Tianguan). 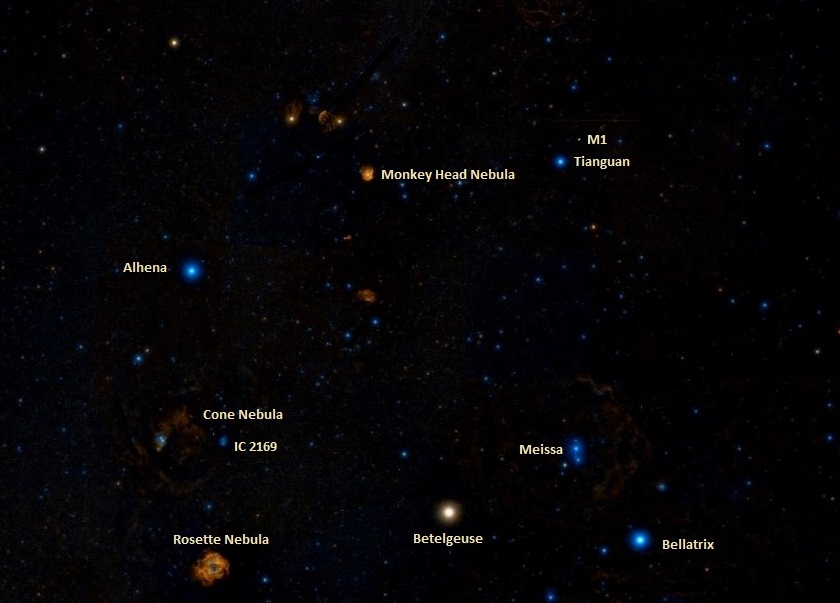 Meissa is located in the constellation Orion, one of the brightest and best known constellations in the sky. Known since ancient times, Orion represents the Hunter and its shape is outlined by seven exceptionally bright stars. Betelgeuse and Bellatrix mark the shoulders, Alnitak, Alnilam and Mintaka form Orion’s Belt, while Saiph and Rigel, the constellation’s brightest star, mark the knees or feet.

Orion is one of the most popular targets for stargazers because it harbours several bright, well-known deep sky objects. Located just under Orion’s Belt, the Orion Nebula (Messier 42) is the nearest star forming region to the Sun and one of the brightest nebulae in the sky. It contains the Trapezium Cluster, a bright cluster (mag. 4.0) of young stars which can be resolved in a telescope. De Mairan’s Nebula (Messier 43) is situated just to the north of M42, and the diffuse reflection nebula Messier 78 lies about 2 degrees north and a little east of Alnitak, the leftmost star of Orion’s Belt. Other popular telescope targets in Orion include the dark nebula Barnard 33, better known as the Horsehead Nebula, located just south of Alnitak, and the Flame Nebula (NGC 2024), an emission nebula illuminated by Alnitak.

The best time of year to observe the stars and deep sky objects in Orion is during the month of January, when the constellation dominates the evening sky.