Adhara, Epsilon Canis Majoris (ε CMa), is a binary star system located in the constellation Canis Major. It lies at a distance of 430 light years from Earth. With an apparent magnitude of 1.50, it is the second brightest star in Canis Major, after Sirius, and the 22nd brightest star in the sky. It is slightly brighter than Castor in Gemini, Shaula in Scorpius and Gacrux in Crux, but outshined by Deneb in Cygnus, Mimosa in Crux and Regulus in Leo.

Epsilon Canis Majoris A is a bright giant of the spectral type B2 II, appearing blue-white in colour. With a surface temperature of 22,900 K, it shines with a luminosity 38,700 times that of the Sun and has an absolute magnitude of -4.8. However, because of its high temperature, it radiates a significant portion of its energy output in the invisible ultraviolet part of the spectrum. The star has the size 13.9 times that of the Sun and about 12.6 solar masses, enough to make it a supernova candidate. The star’s estimated age is 22.5 million years. The companion has an absolute magnitude of 1.9 and an apparent magnitude of 7.5. It lies at least 900 astronomical units from the primary, which means that the stars take at least 7,500 years to complete an orbit.

Adhara and Sirius are included on the list of the 58 stars selected for navigation. Navigational stars have a special status in the field of celestial navigation because they are some of the brightest and most recognizable stars in the sky.

Adhara is the brightest known extreme ultraviolet source in the sky. If we could see in ultraviolet wavelengths, it would outshine all the other stars. A study published In 1995 found the star to be the strongest source of Lyman continuum photons (photons emitted above the Lyman limit, capable of ionizing hydrogen atoms in the nearby gas), one that plays an important role in the ionization of hydrogen in the Local Interstellar Cloud (the interstellar cloud stretching across 30 light years, through which the Sun is moving).

Adhara is one of the stars that appear on Brazil’s national flag. Each star featured on the flag represents a Brazilian Federative Unit and Adhara symbolizes the state of Tocantins.

The name Adhara formally applies only to Epsilon Canis Majoris A, but is commonly used for the entire star system. It was officially approved by the International Astronomical Union’s (IAU) Working Group on Star Names (WGSN) on August 21, 2016.

Adhara is located in a region of the sky populated by a number of other exceptionally bright stars. These include Sirius, Procyon, Pollux and Castor, Rigel, Betelgeuse and the stars of Orion’s Belt. Marking one of the hind legs of Canis Major, Adhara is easy to find because it is the brightest of the three relatively bright stars located under Sirius. Sirius is easy to identify, both because it is brighter than any other star in the sky and because the stars of Orion’s Belt – Alnitak, Alnilam and Mintaka – point directly at it.

Adhara forms a triangle with fellow “virgins” Wezen (Delta CMa) and Aludra (Eta CMa), and marks the lower right vertex of the triangle. 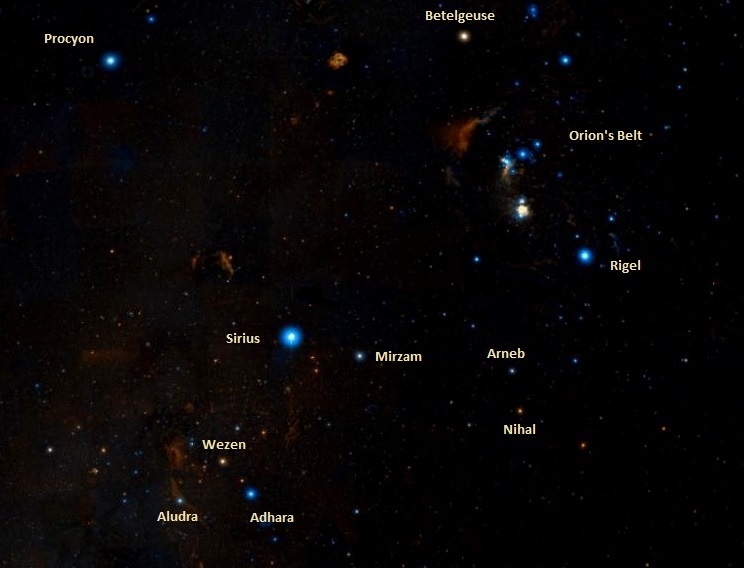 Adhara is located in the constellation Canis Major. Representing the larger of the two dogs following Orion, the Hunter, Canis Major is home to a number of interesting stars, including Sirius, the brightest star in the sky, the yellow-white supergiant Wezen, the blue giant (or bright giant) Mirzam, the blue-white supergiant Aludra, and the red supergiant (or hypergiant) VY Canis Majoris, one of the largest stars known. The best time of year to observe the stars and deep sky objects in Canis Major is during the month of February.