Schedar, Alpha Cassiopeiae (α Cas) is an orange giant star located in the constellation Cassiopeia. It lies at a distance of 228 light years from Earth. With an apparent magnitude of 2.240, it is the brightest or second brightest star in Cassiopeia. It is sometimes outshined by its variable neighbour Gamma Cassiopeiae (mag. 1.6 – 3.0) and it just barely outshines Caph (Beta Cassiopeiae, mag. 2.28). All three stars are part of Cassiopeia’s familiar W asterism.

Schedar has the stellar classification K0IIIa, indicating a giant star appearing orange in colour. The star is 4-5 times more massive than the Sun and has a radius about 42.1 times solar. With a surface temperature of 4,530 K, it shines with 676 solar luminosities. The star’s estimated age is between 100 and 200 million years.

Schedar is a relatively slow spinner. With a projected rotational velocity of 21 km/s, it takes about 102 days to complete a rotation.

Schedar’s angular diameter was measured in 1998, yielding a value of 5.62 ± 0.06 milliarcseconds for the limb-darkened diameter. This translates into a physical radius of 0.393 astronomical units, or about 42 solar radii. Schedar was reported to be a variable star in the 19th century and is still often listed as a suspected variable. However, no evidence of variability has been detected in the past century.

On average, Schedar is the 71st brightest star in the sky. It is about as bright as Alphecca in the constellation Corona Borealis, Suhail in Vela, Sadr in Cygnus, Eltanin in Draco, and Mintaka in Orion. It just outshines its neighbour Caph in Cassiopeia, Epsilon Centauri in Centaurus, and Dschubba in Scorpius.

Even though the German astronomer Johann Bayer assigned it the designation Alpha, Schedar appears as bright as Caph, Beta Cassiopeiae. Each of the two stars can appear brighter or fainter than the other in different passbands. To the unaided eye, they appear equally bright. Schedar was confirmed to be marginally brighter than Caph by observations and measurements made with NASA’s WISE telescope. Schedar is almost 25 times more intrinsically luminous than Caph, with an energy output 676 times that of the Sun (compared to Caph’s luminosity of 27.3 L☉) and it is about four times more distant than Caph, which lies 54.7 light years away.

Schedar is the coolest and largest of the five stars that form Cassiopeia’s W. With a size of 42.1 solar radii, it is more than four times larger than the second largest star, Gamma Cassiopeiae (10 R☉), and more than 10 times larger than Caph (3.43 – 3.69 R☉) and Ruchbah (3.90 R☉). However, with a mass of 4-5 solar masses, it is only the third most massive of the five stars. The blue, class B stars Gamma Cassiopeiae and Segin (Epsilon Cassiopeiae) are both more massive, with 17 and 9.2 solar masses respectively.

The name Schedar (pronunciation: /ˈʃɛdɑːr/) comes from the Arabic şadr, meaning “breast.” It refers to the star’s position in the constellation Cassiopeia, marking the mythical queen’s heart. The name of Gamma Cygni, Sadr, is derived from the same word. Sadr marks the chest of the celestial Swan (Cygnus).

The name Schedar was officially approved by the International Astronomical Union’s (IAU) Working Group on Star Names (WGSN) on August 21, 2016.

In Chinese astronomy, Alpha Cassiopeiae is known as 王良四 (Wáng Liáng sì), the Fourth Star of Wang Liang. The Chinese Wang Liang asterism (named after a famous charioteer during the Spring and Autumn period in China) is formed by Schedar with Caph (Beta Cassiopeiae), Kappa Cassiopeiae, Achird (Eta Cassiopeiae), and Lambda Cassiopeiae. The asterism is part of the Legs mansion, which represents the tail of the White Tiger of the West.

Schedar is very easy to find because it is part of a bright, prominent asterism. It is the bottom right star of Cassiopeia’s W. It can be seen from all locations north of the latitude 33° S. Observers south of the equator can only see it low above the horizon at certain times of the year. 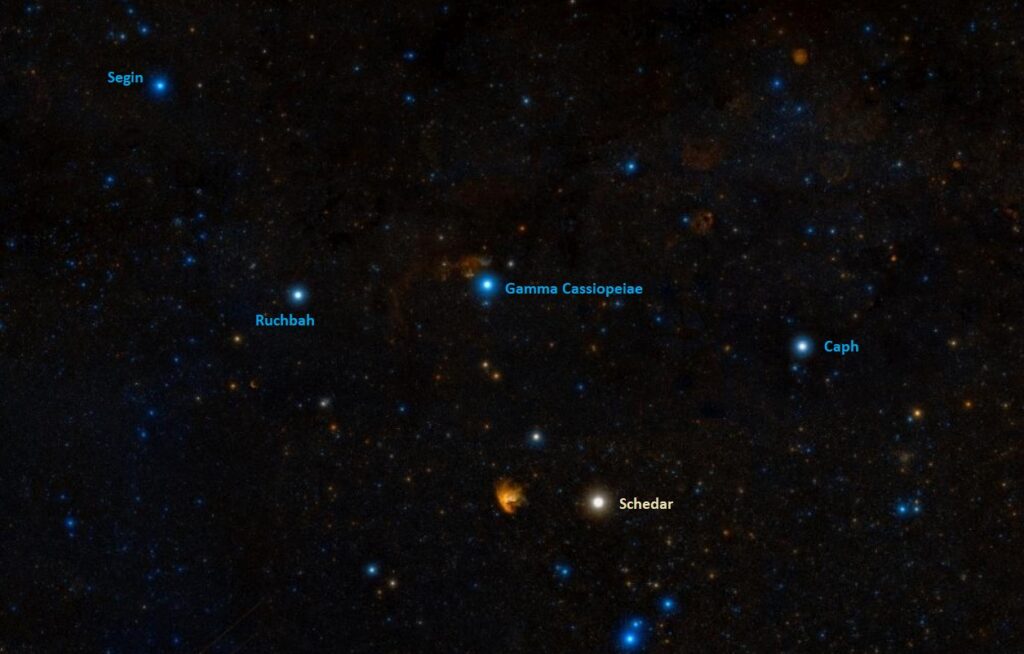 Schedar and other bright stars of Cassiopeia lie in a rich field of the Milky Way and can be used to find a number of bright deep sky objects. Schedar can be used to find the bright emission nebula NGC 281, popularly known as the Pacman Nebula. The nebula is also catalogued as IC 11 and Sharpless 184. With a physical radius of 48 light years, it stretches across 35’ of the sky and is associated with the open cluster IC 1590. It lies at an approximate distance of 9,500 light years.

Schedar can also be used to find several deep sky objects that do not appear in the same field of view. A line drawn from Schedar through Caph, the top right star of Cassiopeia’s W, leads to the bright open cluster Messier 52. With an apparent magnitude of 5.0, the cluster is easily seen in binoculars. It lies 4,600 light years away.

Several other deep sky objects lie in the vicinity of M52: the magnitude 10 emission nebula NGC 7635, better known as the Bubble Nebula, the emission nebula Sharpless 157, nicknamed the Lobster Claw Nebula, the star-forming nebula NGC 7538, and the open cluster NGC 7510. These objects lie on the border of the constellations Cassiopeia and Cepheus. M52, the Bubble Nebula and the Lobster Claw Nebula are in Cassiopeia and NGC 7538 and NGC 7510 lie in Cepheus. Cassiopeia is also home to two well-known supernova remnants: Tycho’s Nova (SN 1572), the remnant of a Type Ia supernova observed in November 1572, and Cassiopeia A, the expanding shell of a star that went out some 300 years ago. Cassiopeia A is the brightest radio source in the sky outside the solar system.

The best known deep sky objects in Cassiopeia are the neighbouring emission nebulae IC 1805 and IC 1848, also known as the Heart and Soul nebulae, the Bubble Nebula (NGC 7635), the Pacman Nebula (NGC 281) near Schedar, the bright open clusters Messier 52, Messier 103 and the E.T. Cluster (NGC 457) near Ruchbah, the White Rose Cluster (NGC 7789) near Caph, NGC 663 and NGC 654 between Segin and Ruchbah, and the irregular starburst galaxy IC 10 near Caph.

The best time of year to observe the stars and deep sky objects of Cassiopeia is during the month of November. The constellation is visible in its entirety from locations between the latitudes 90° N and 20° S.