Alphecca, Alpha Coronae Borealis (α CrB), is the brightest star in the constellation Corona Borealis, the Northern Crown. Also known as Gemma, Alpha CrB is an eclipsing binary star system that marks the jewel in the crown of the Greek mythical princess Ariadne. Ariadne’s crown is represented by a semicircle of relatively bright stars that gives Corona Borealis its name. Alphecca has an average apparent magnitude of 2.23 and lies at an approximate distance of 75 light years from Earth.

Alpha Coronae Borealis is an eclipsing binary system consisting of two main sequence stars of the spectral types A0V and G5V that orbit each other with a period of 17.3599 days and an eccentricity of 0.370. The average distance between the stars is 0.20 astronomical units. During their orbit, the stars come within 0.13 astronomical units of each other and go as far apart as 0.27 astronomical units. The orbit is inclined at an angle of 88.2° to our line of sight and, as a result, we see the stars eclipse each other as they orbit. The eclipses cause the system’s brightness to vary from magnitude 2.21 to 2.32. The amplitude of the variations is too small to be noticed by the unaided eye.

The primary component in the system is the white, class A0 main sequence star. It has a mass 2.58 times that of the Sun and a radius between 2.89 and 3.04 times solar. With an effective temperature of 9,700 K, the star is 74 times more luminous than the Sun. It is a fast spinner, with a projected rotational velocity of 139 km/s. The star’s estimated age is 314 million years. A survey with the Infrared Astronomical Satellite (IRAS) in 2006 revealed excess emission in the infrared, indicating the presence of a debris disk around the star in which planets and protoplanetary systems may form. A study published in 2014 estimated a radius of 61 astronomical units for the disk.

The secondary component in the Alpha Coronae Borealis system is a yellow main sequence star with the stellar classification G5V. The star is slightly smaller and less massive than the Sun, with a size of 0.90 solar radii and mass of 0.92 solar masses. With a surface temperature of 5,800 K, it shines with 0.81 solar luminosities. The star has an estimated rotational velocity of less than 14 km/s and a rotation period of 7 to 9 days. 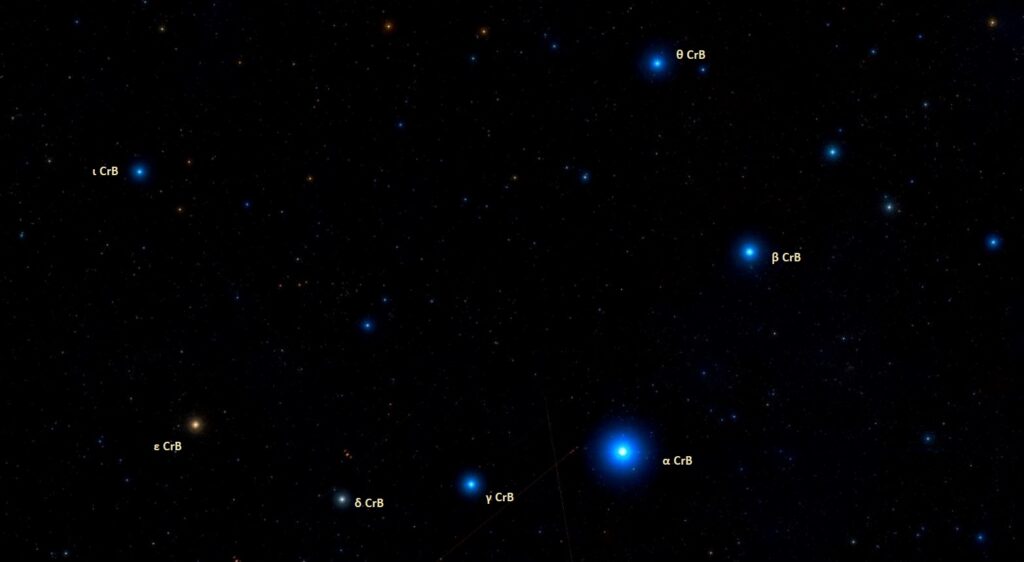 Alphecca is one of the 58 bright stars that have a special status in the field of celestial navigation. It is the only navigational star in Corona Borealis. It is part of a group of 13 navigational stars located in the equatorial region of the western celestial hemisphere. The group also includes Antares in Scorpius, Enif and Markab in Pegasus, Altair in Aquila, Rasalhague and Sabik in Ophiuchus, Spica in Virgo, and Nunki in Sagittarius.

Alphecca is an outlying member of the Ursa Major Moving Group (Collinder 285), a stellar association that includes most of the bright stars of the Big Dipper – Alioth, Mizar and Alcor, Phecda, Merak and Megrez – as well as Menkalinan in the constellation Auriga, Skat in Aquarius, Adhafera in Leo, Gamma Leporis in Lepus, Beta Serpentis in Serpens, and Zeta Boötis in Boötes. The stars in the Ursa Major association share common velocities in space and are believed to have formed in the same molecular cloud about 300 million years ago.

Alphecca is one of the 15 Behenian fixed stars, which were believed to have special astrological power for one or more planets in the Middle Ages. Medieval astrologers associated each of the stars with a plant and gemstone and used these in rituals to draw out the stars’ influence. Alphecca was associated with topaz and rosemary and linked with the planets Mars and Venus.

The name Alphecca (pronunciation: /ælˈfɛkə/) was approved for Alpha Coronae Borealis by the International Astronomical Union’s (IAU) Working Group on Star Names (WGSN) on July 20, 2016. It comes from the Arabic phrase nayyir al-fakka, meaning “the bright (star) of the broken (ring of stars).” The description nayyir al-fakka (Nir al Feccah) appeared in the Egyptian astronomer Al Achsasi al Mouakket’s Calendarium, written circa 1650. The name has also been spelled as Alphekka.

The star has also traditionally been known as Gemma Coronae or simply Gemma, which is the Latin word for “jewel,” and as Asteroth or Ashtaroth, derived from the Hebrew ‘ašterôt (Astarte). The Latin name Gnosia Stella Coronae, meaning “the star of the crown of Knossos,” was mentioned in Virgil’s Georgics (29 BCE). (The city of Knossos, the centre of the Minoan civilization, was the home of the mythical princess Ariadne, daughter of King Minos and half-sister of the Minotaur.)

Alphecca is the brightest star in Corona Borealis, a small but distinctive constellation located between the larger Boötes, Hercules, and Serpens. Recognizable for the semicircle of relatively bright stars, Corona Borealis can be found in the area between Arcturus, the brightest northern star, and the Keystone asterism in Hercules, formed by Pi, Eta, Zeta and Epsilon Herculis, which represents the torso of Hercules. Arcturus is easy to find because it lies on the imaginary curved line extended from the arc of the Big Dipper’s handle, formed by Alioth, Mizar and Alkaid. The Northern Crown lies just to the east of Arcturus. 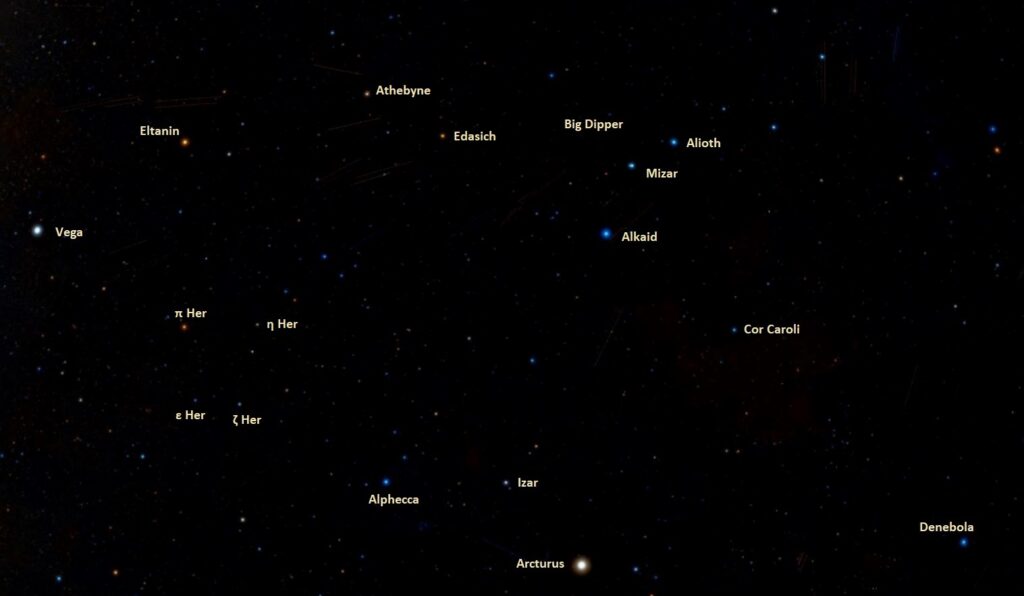 Alphecca is located in the constellation Corona Borealis, the Northern Crown. Corona Borealis is among the smallest constellations in the sky, 73rd in size out of 88, occupying an area of only 179 square degrees. Even though it is small, it is one of the most recognizable northern constellations. Its seven brightest stars form a distinctive semicircle that rises high overhead during the northern hemisphere summer. The constellation represents the crown given to the Cretan princess Ariadne by Dionysus, which she wore at their wedding. Deep sky objects in the constellation include the spiral galaxy NGC 6085, the elliptical galaxy NGC 6086, and the Corona Borealis Supercluster, the most prominent supercluster in the northern celestial hemisphere.

The best time of year to observe the stars and deep sky objects of Corona Borealis is during the month of July, when the constellation is prominent in the evening sky. The entire constellation is visible between the latitudes 90° N and 50° S.