Mirfak, Alpha Persei (α Per) is a yellow supergiant star located in the constellation Perseus. With an apparent magnitude of 1.806, it is the brightest star in Perseus, outshining the more famous Algol, and the 33rd brightest star in the sky. It shares the 33rd place with Dubhe, Alpha Ursae Majoris. The two stars are slightly fainter than Alnair in the constellation Grus, Alnitak in Orion and Alioth in Ursa Major, but they outshine Regor in Vela, Wezen in Canis Major and Kaus Australis in Sagittarius.

Mirfak lies at a distance of 510 light years from Earth. It is the central star of a young open star cluster known as the Alpha Persei Cluster, which can easily be seen in binoculars.

Mirfak has the stellar classification F5 Ib, indicating an evolved supergiant star appearing yellow-white in colour. It has a mass 8.5 times that of the Sun and has expanded to a size of 68 solar radii. With an effective temperature of 6,350 K, it is about 5,000 times more luminous than the Sun.

In 2010, radial velocity measurements indicated the presence of a planet orbiting the star. Observations found a periodic variation in the star’s radial velocity with an amplitude of 70.8 ± 1.6 m/s. The (unconfirmed) planet has a mass of at least 6.6 Jupiter masses and orbits the star from a distance of 0.97 astronomical units with a period of 128 days. However, the planet’s existence is doubtful because the variations in radial velocity are more likely to be a result of starspots or other surface features combined with the effect of rotation. Earlier studies reported variations with periods of 87.7 or 77.7 days, but the data has not been confirmed.

Mirfak is one of the 58 stars that have a special status in the field of celestial navigation. It is the only navigational star in Perseus. 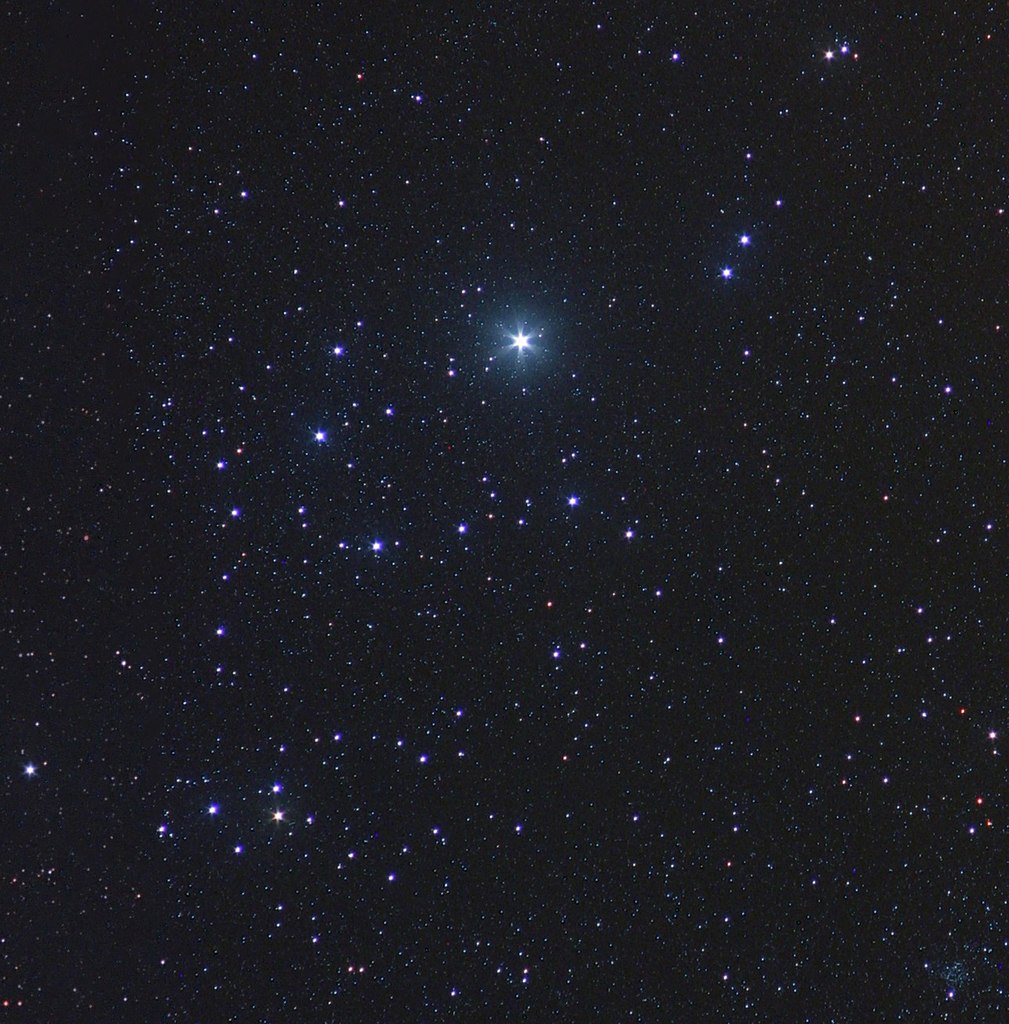 The Alpha Persei Cluster, or Alpha Persei Moving Group, consists of massive blue class B stars that formed together at around the same time and continue to move together through space. Catalogued as Collinder 39 and Melotte 20, the cluster has an apparent magnitude of 1.2 and occupies an area of 185′. The brightest members can be seen in the area between Mirfak and Delta Persei. About a dozen of the stars are brighter than 6th magnitude. Members include Delta, Psi, Sigma, Epsilon, 29, 30, 34, and 48 Persei. The estimated age of the cluster is between 50 and 70 million years. The stars lie at a distance of 557 to 650 light years.

Mirfak has been used as a spectral standard for its class since 1943. Spectral standard stars are used as anchor points for the Morgan-Keenan (MK) system of stellar classification, used to classify stars based on their spectral features. 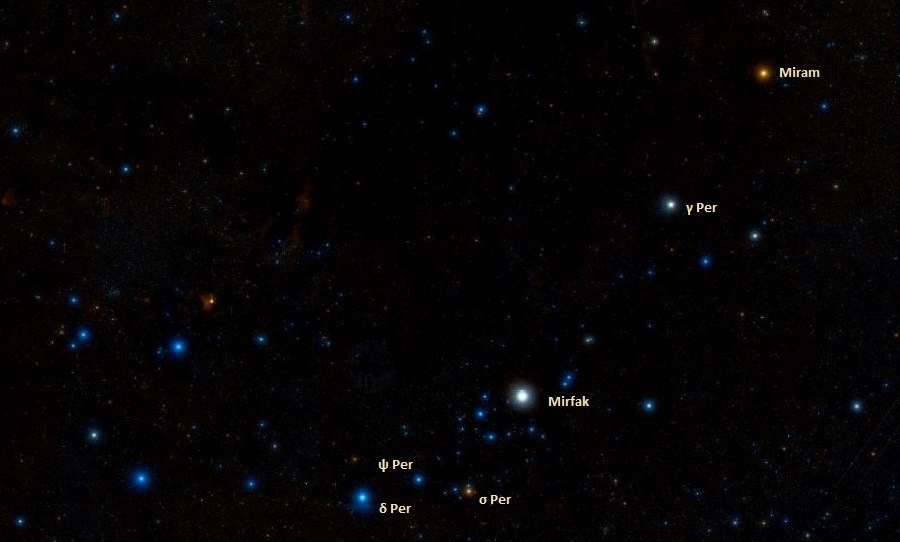 The name Mirfak (pronunciation: /ˈmɜːrfæk/) is derived from the Arabic word for “elbow” and comes from the phrase al-Mirfaq uth-Thurayyā. It refers to the elbow of the Pleiades. The International Astronomical Union’s (IAU) Working Group on Star Names (WGSN) officially approved the name for the star on July 20, 2016.

Mirfak has another traditional name, Algenib, derived from the Arabic al-jānib, which means “the flank” or “the side.” It shared the name with Gamma Pegasi, one of the stars of the Great Square of Pegasus. When the WGSN was organized to standardize proper names for stars, the name Algenib was approved for Gamma Pegasi and Mirfak for Alpha Persei.

Mirfak has been known by many other names across different cultures. The Chinese know the star as 天船三 (Tiān Chuán sān), the Third Star of Celestial Boat. In Chinese astronomy, Mirfak is part of an asterism called Celestial Boat, also formed by Gamma Persei, Delta Persei, Miram (Eta Persei), Mu Persei, Psi Persei, 48 Persei and HD 27084.

In Hawaii, the star is known as Hinali’i. It is associated with a great tsunami and the start of the migration of Maui. In local lore, Hinali’i marks the point where the Earth and the sky were separated when the Milky Way was created.

Mirfak is relatively easy to find because it is located near several familiar patterns of stars. It lies in the region of the sky under Cassiopeia, recognizable for its W asterism, and is the brightest star just above the line connecting the bright Capella in the constellation Auriga and Almach in Andromeda. Capella is easy to identify because it is exceptionally bright and part of a hexagonal asterism formed by Auriga’s brightest stars with Elnath in Taurus. Almach can be found using the stars of the Great Square of Pegasus (Alpheratz, Scheat, Markab and Algenib). Alpheratz, the brightest and northernmost of the four stars (and the only one belonging to the constellation Andromeda and not Pegasus) is the first in a line of three bright stars that lead toward Perseus. The second star is Mirach, commonly used to find the Andromeda Galaxy (Messier 31) and Triangulum Galaxy (Messier 33), and the third one is Almach.

A different way to find Mirfak is using the stars of Cassiopeia’s W asterism. Mirfak is the brightest star along the imaginary line extended from Gamma Cassiopeiae through Ruchbah (Delta Cassiopeiae).

There are several interesting deep sky objects in the vicinity of Mirfak. The relatively bright ones include the open clusters NGC 1245 and NGC 1528, and the emission nebula NGC 1491.

To observers in mid-northern latitudes, Mirfak is circumpolar, i.e. it never sets below the horizon and can be seen at some point during the night throughout the year.

Mirfak is located in the northern constellation Perseus.  Located in the vicinity of several constellations related to the myth of Perseus (Andromeda, Cassiopeia, Cepheus, Cetus and Pegasus), Perseus is usually depicted holding the head of the Gorgon Medusa, marked by the constellation’s famous eclipsing variable star Algol. In addition to the Alpha Persei Cluster, Perseus contains several other notable deep sky objects. These include the bright open clusters Messier 34 (mag. 5.5) and the Double Cluster (NGC 869 and NGC 884, mag. 3.7/3.8), the planetary nebula Messier 76, also known as the Little Dumbbell Nebula (mag. 10.1), and the emission nebula NGC 1499 (California Nebula).

The best time of year to see the stars and deep sky objects in Perseus is during the month of December.