Gamma Cassiopeiae (γ Cas) is a spectroscopic binary star located in the constellation Cassiopeia. Informally known as Navi, it is one of the four brightest stars in Cassiopeia. With an apparent magnitude that varies from 1.6 to 3.0, it sometimes outshines its neighbours Schedar, Caph and Segin to become the constellation’s brightest star. Gamma Cassiopeiae lies at a distance of 550 light years from Earth. It is one of the five stars that form Cassiopeia’s recognizable W asterism.

Gamma Cassiopeiae has the stellar classification B0.5 IVe, indicating a subgiant star appearing blue or blue-white in colour. The star is running out of the supply of hydrogen in its core and is on its way to evolving into a giant. The “e” suffix indicates hydrogen emission lines in the star’s spectrum. These lines are caused by a circumstellar disk of material lost from the star.

Gamma Cassiopeiae has a mass 17 times that of the Sun and, as it ended its main sequence lifetime, it has expanded to a size of 10 solar radii. With a surface temperature of 25,000 K, it is 34,000 times more luminous than the Sun, but most of its output is in the invisible ultraviolet. The star’s estimated age is only 8 million years. Even though it is a very young star, Gamma Cassiopeiae has already left the main sequence and is in the late stages of its existence. Like other exceptionally massive stars, it has evolved very quickly and will not live a very long life. Its high mass seals its fate as a supernova in the not-too-distant astronomical future.

Gamma Cassiopeiae is an exceptionally fast spinner, with a projected rotational velocity of 432 km/s. As a result, its equatorial radius is larger than its polar radius, giving the star a flattened shape. Like its neighbour Caph, Gamma Cassiopeiae is an example of gravity darkening. Its poles are closer to the centre of mass and therefore hotter and more luminous than the equatorial region. Other bright stars that are examples of this include Achernar, Alderamin, Altair, Rasalhague, Regulus, and Vega.

As another effect of the star’s fast rotation, a lot of material from the surface is ejected and forms a hot disk of gas. The decretion disk causes both brightness variations and hydrogen emission lines in the star’s spectrum.

Gamma Cassiopeiae is classified as a Be star, a non-supergiant blue class B star showing Balmer (hydrogen) emission lines in its spectrum. It was the first star to be identified as a Be star, by the Italian astronomer Angelo Secchi in 1866. The brightest star belonging to this group is Achernar in the constellation Eridanus, the ninth brightest star in the sky. Achernar was only recognized as a Be star in 1976. The emission lines in these stars are believed to come from circumstellar disks of material ejected from the stellar surfaces as a result of rapid rotation. Many Be stars are variable in brightness. If there is a transient disk, they are classified as Gamma Cassiopeiae variables. If they are believed to be pulsating stars, they are classified as Lambda Eridani variables.

Gamma Cassiopeiae and other variables of this type are eruptive stars. Typically, they are fast spinning class B subgiants, giants or sometimes main sequence stars, that show brightness variations with larger amplitudes than other Be stars. They have decretion disks around the equatorial region, which sometimes reform or disappear. The periods when the disks are particularly strong and the brightness increases are called shell events.

Gamma Cassiopeiae underwent two such events in 1935-36 and 1939-40, brightening to above magnitude +2.0, then rapidly dimming to magnitude +3.4. Its brightness has been slowly increasing since to about magnitude 2.2. At its brightest, the star outshines both Schedar (mag. 2.24) and Caph (mag. 2.28).

Gamma Cassiopeiae was identified as an X-ray source in 1976, but it was unclear whether the star itself was the source or it had a mass-accreting binary companion. A study of the star’s X-ray flux found variations with a period interpreted as the star’s rotational period (1.21 days), indicating that the X-rays did not come from a companion. The X-ray radiation emanating from the star is about 10 times stronger than the radiation detected from other Be or B stars.

Measurements of the star’s radial velocities led to the discovery that Gamma Cassiopeiae was a spectroscopic binary system. The star was reported to be a binary with a period of 203.59 days in a study published in 2000. The study suggested that the companion had a mass between 0.7 and 1.9 solar masses and was not responsible for the X-ray emission detected from the star.

The binary nature of the star was confirmed in 2011. Since there were no signs of a companion in the spectrum of Gamma Cassiopeiae, the system was adopted as a single-lined spectroscopic binary, that is to say, a system where the spectrum of only one component is seen and the presence of a companion is inferred from spectral lines periodically shifting towards the blue, then towards red and then towards blue again, indicating that the components are moving toward us and away from us, i.e. that they are orbiting around a common centre of mass. The 2011 study suggested a circular orbit with a period between 203.0 and 203.6 days and a companion with a mass of 0.98 solar masses. The companion is believed to be more evolved than the primary and to have transferred some of its mass to the brighter star during an earlier evolution phase.

Gamma Cassiopeiae also has two visual companions, catalogued as components B and C. The first companion is a magnitude 11 star separated by about 2 arcseconds from the primary, and the second is a magnitude 13 star almost an arcsecond away from the primary. The component B has a similar space velocity to Gamma Cassiopeiae and may be a physical companion at a separation of at least 370 light years, orbiting with a period of at least 1,500 years. 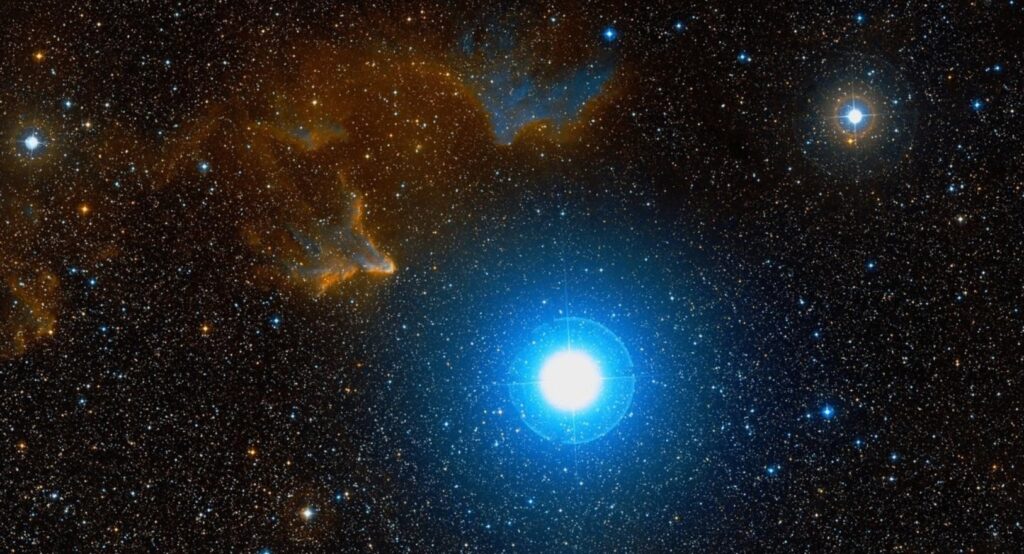 With a temperature of 25,000 K, a mass 17 times that of the Sun, luminosity 34,000 times solar, and an age of 8 million years, Gamma Cassiopeiae is the youngest, most luminous, hottest and most massive of the five stars that form the W. At a distance of 550 light years, it is also by far the most distant. Segin, the other hot class B star in the asterism, has 9.2 solar masses, a temperature of 15,174 K, a luminosity 2,500 times that of the Sun and it is about 140 light years closer to us. The other three stars are much cooler, less luminous, less massive, considerably older, and much closer to us.

Gamma Cassiopeiae does not have a formal name. The only brighter star without a formally approved name is Gamma Velorum (informally known as Regor).

Gamma Cassiopeiae is informally known as Navi or Tsih. The name Navi (Ivan spelled backwards) was given to it by the American astronaut Virgil Ivan “Gus” Grissom, commander of the ill-fated Apollo 1 mission. Grissom had used the name Navi as a joke on his planning charts for the mission and succeeding Apollo astronauts kept using it as a memorial.

Gamma Cassiopeiae is very easy to find. It is the central star of Cassiopeia’s W pattern. With a declination of +60° 43’, the star is visible from all locations north of the equator, but cannot be seen south of the latitude 29° S. Observers in southern latitudes where the star rises can only see it appear low above the horizon at certain times of year. 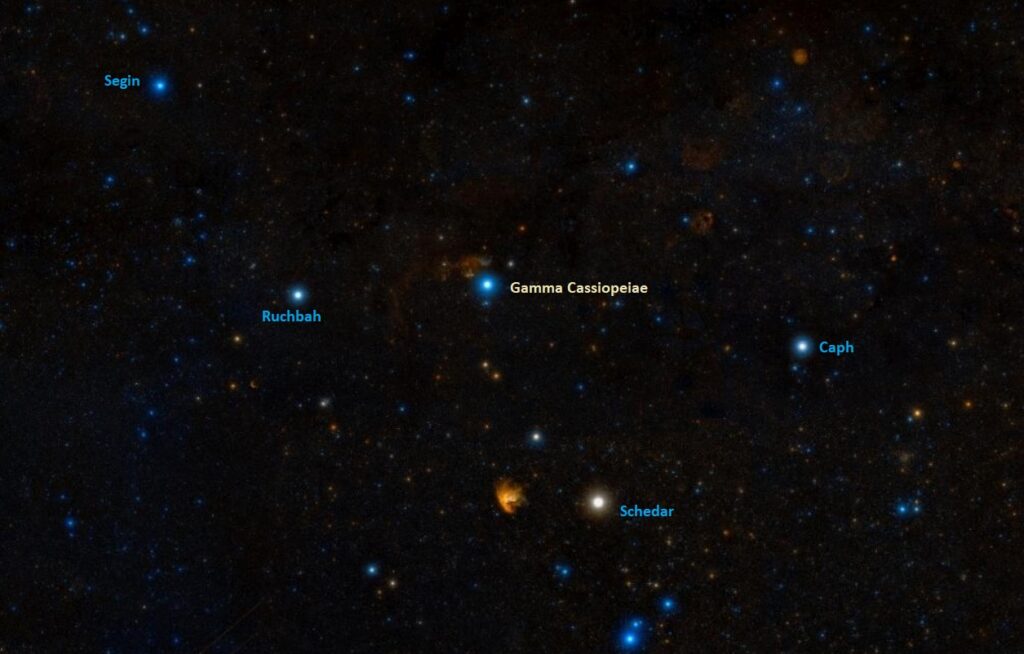 Gamma Cassiopeiae can be used to find several interesting deep sky objects. The emission-reflection nebulae IC 59 and IC 63 lie only 3-4 light years from the star. IC 59 appears north of the star, while IC 63 is more to the northeast. Both nebulae lie at an approximate distance of 610 light years. With an apparent magnitude of 10, they are quite faint. Additionally, they have very low surface brightness and can only be spotted in 10-inch or larger telescopes if observing conditions are not ideal. 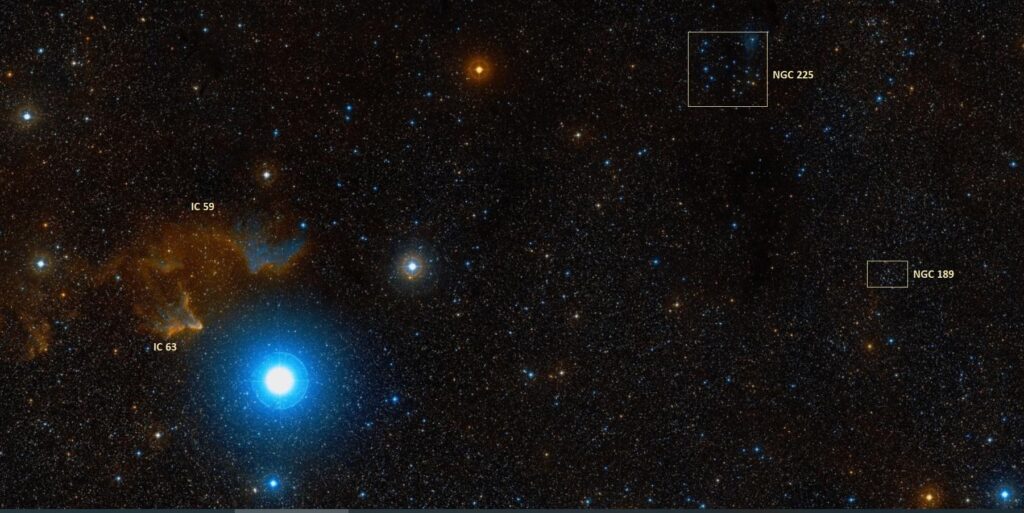 Nicknamed the Ghost of Cassiopeia or the Ghost Nebula, IC 63 is slowly being eroded away by the star’s radiation. The ultraviolet radiation energizes the electrons within the nebula, and the electrons release the energy as hydrogen-alpha emission, which gives the nebula its red glow. The blue light of the nebula is the light from the star reflected by the dust in the nebula. 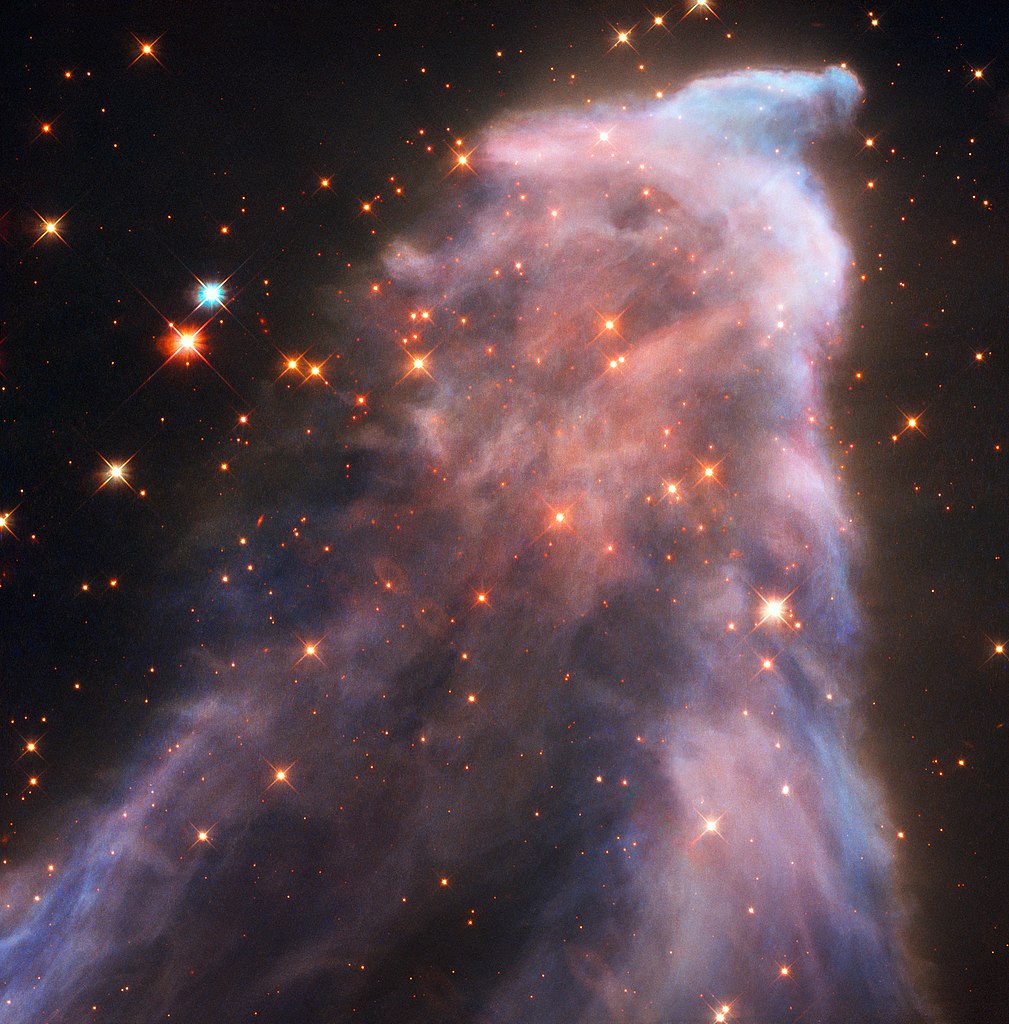 The large open cluster NGC 225 stretches across 12 arcminutes northwest of the star. It has an apparent magnitude of 7.0 and lies at a distance of 2,143 light years.

Gamma Cassiopeiae is located in the northern constellation Cassiopeia. Circumpolar in the northern hemisphere, Cassiopeia has been known to observers since ancient times. It is one of the 48 Greek constellations, first listed by the Greek astronomer Claudius Ptolemy in the 2nd century CE. Stretching across an area of 598 square degrees, it is the 25th constellation in size. It lies near several other constellations associated with the myth of Perseus: Perseus, Andromeda, Cepheus and Pegasus. The best time of year to see the stars and deep sky objects of Cassiopeia is during the month of November, when the constellation is prominent in the evening sky. The entire constellation is visible from locations between the latitudes 90° N and 20° S.