Caph has the stellar classification F2 III, indicating a giant star appearing white in colour. The star has a mass of 1.91 solar masses and a radius that changes from 3.43 to 3.69 solar radii due to pulsations. With a surface temperature of 7,079 K, Caph is 27.3 times more luminous than the Sun. Its estimated age is between 1.09 and 1.18 billion years.

Caph started its life as a white, class A main sequence star with about twice the Sun’s mass. It has now likely burned through the supply of hydrogen in its core and is currently in the process of cooling and expanding. In the not-so-distant astronomical future, it will evolve into a red giant. The star is not massive enough to be a supernova candidate. Instead, when it comes to the end of its life, it will cast off its outer layers into space and gradually fade away as a white dwarf. Caph is classified as a Delta Scuti variable, a star that exhibits changes in brightness due to both radial and non-radial pulsations. This means that some parts of the star’s surface move inwards while others move outwards (non-radial pulsations) and that the star expands and contracts in order to keep its spherical shape (radial pulsations), which causes changes in its size. Caph’s brightness varies from magnitude 2.25 to 2.31 every 2.5 hours. Other stars of this type include Altair in the constellation Aquila, Seginus in Boötes, Polaris Australis in Octans, and Epsilon Cephei in Cepheus. The bright Vega in Lyra and Denebola in Leo are also suspected Delta Scuti variables. Among the confirmed ones, only Altair is brighter than Caph.

Caph is a very fast spinner. It completes 1.12 rotations every day. With a projected rotational velocity of 71 km/s, it spins at about 92% of its critical rate. As a result of its fast rotation, the star has an oblate spheroid shape and its equatorial radius is 24% larger than its polar radius. Because the poles are closer to the centre of mass, they also have a higher temperature and luminosity than the equatorial region. The temperature at the poles is about 1,000 K higher than at the equator. The phenomenon is known as gravity darkening. Other oblate stars that are well-known examples of this are Vega, Altair, Achernar, Regulus, Alderamin and Rasalhague.

Caph forms Cassiopeia’s W asterism with Schedar (Alpha Cassiopeiae), Gamma Cassiopeiae, Ruchbah (Delta Cassiopeiae), and Segin (Epsilon Cassiopeiae). The asterism appears as a W during northern spring and summer and it appears inverted in winter and when seen from locations in the southern hemisphere.

Being more than a billion years old, Caph is by far the oldest of the five stars that form the W. Ruchbah, the second oldest of the group, is 600 million years old. Caph is also the smallest, least massive and least intrinsically luminous of the five stars. It appears so bright because, at a distance of 54.7 light years, it is the nearest to us. The second nearest of the W stars, Ruchbah, lies 99.4 light years away.

On average, Caph is the 74th brightest star in the sky. It is only slightly fainter than its neighbour Schedar in Cassiopeia, Eltanin in Draco and Mintaka in Orion, and it just outshines Epsilon Centauri in the constellation Centaurus, Dschubba and Larawag in Scorpius, and Alpha Lupi in Lupus.

Caph, Alpheratz in Andromeda, and Algenib in Pegasus were known as Three Guides. The three bright stars mark the equinoctial colure, an imaginary line on the celestial sphere also called the prime meridian, which passes through the north and south celestial poles and the vernal and autumnal equinoxes. The prime meridian runs south from Caph through Alpheratz to the point on the celestial equator that the Sun appears to cross at each spring and autumn equinox.

Tycho’s Supernova (SN 1572), a Type Ia supernova observed in early November 1572, appeared 5 degrees northwest of Caph. The supernova reached a peak magnitude of -4. It was named after the Danish astronomer Tycho Brahe, who made extensive observations of the “new star” and published them in 1573.

Beta Cassiopeiae was discovered to be a Delta Scuti variable by the American astronomer Robert L. Millis, who observed the star with the 16-inch reflector at Pine Bluff Observatory in Wisconsin on October 16, 1964 and with the 21-inch reflector at Lowell Observatory in Arizona in August 1965. Millis published his findings in 1966, noting that the star is probably a new member of the Delta Scuti group and highlighting its high rotational velocity compared to other known members.

Caph was once believed to be a spectroscopic binary star with an unresolved companion in a 27-day orbit. However, the existence of the companion was never confirmed.

The name Caph (pronunciation: /ˈkæf/) is derived from the Arabic kaf, meaning “palm.” It comes from the phrase al-Kaff al-Khadib, meaning “the stained hand.” The name originally referred to an asterism formed by Cassiopeia’s brightest stars, which represented a hand stained with henna. The asterism was part of a larger pattern, known as Thuraya, which stretched across Cassiopeia, Perseus, Taurus and Cetus. The head of Thuraya was marked by the Pleiades cluster in Taurus and the other hand was located in the constellation Cetus. The name al-Kaff al-Khadib was eventually shortened to al-Kaff and came to refer only to Beta Cassiopeiae. The alternative versions of the name included Chaph and Kaff.

The name Caph was officially approved by the International Astronomical Union’s (IAU) Working Group on Star Names (WGSN) on June 30, 2016. It formally applies only to the component Beta Cassiopeiae A.

In Chinese astronomy, Caph is known as 王良一 (Wáng Liáng yī), the First Star of Wang Liang. Wang Liang was a famous charioteer during the Spring and Autumn period (771 BCE – 476 BCE) in China. The Wang Liang asterism is formed by Caph with Kappa Cassiopeiae, Achird (Eta Cassiopeiae), Schedar (Alpha Cassiopeiae), and Lambda Cassiopeiae. It is part of the Legs mansion, which represents the tail of the White Tiger.

Caph is very easy to find because it is part of a familiar star pattern, Cassiopeia’s W. It is the rightmost star in the asterism. 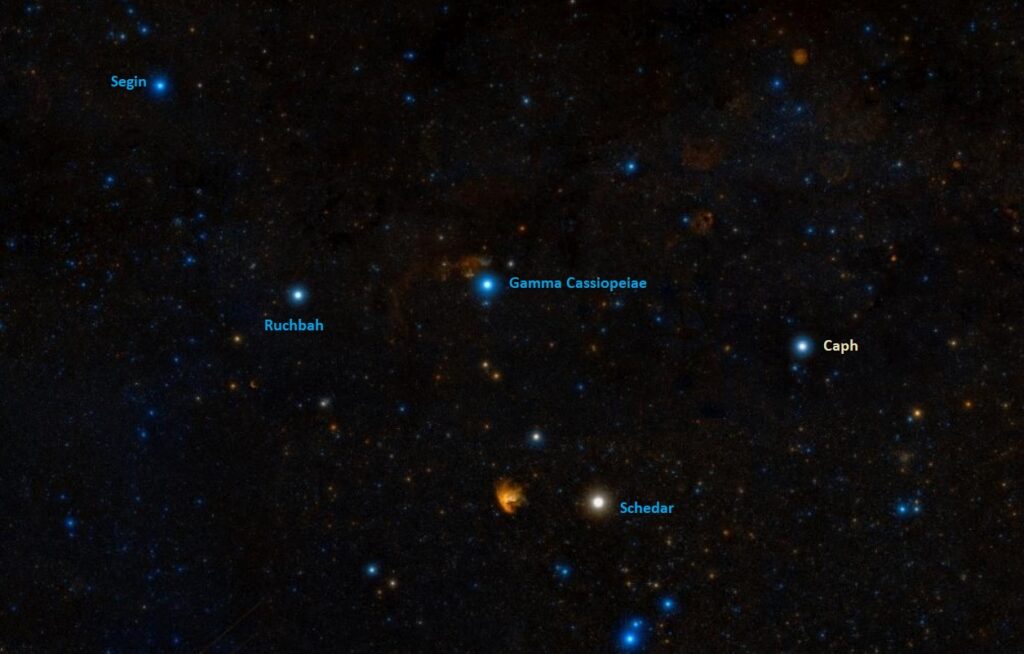 Caph can be used to find several bright deep sky objects that lie in the same area. The irregular galaxy IC 10, the only known starburst galaxy in the Local Group, appears just east of the star. The open clusters NGC 7788 and NGC 7790 lie to the northwest, and NGC 7789 (the White Rose Cluster) appears to the southwest. The open cluster NGC 129 can be seen about halfway from Caph to Gamma Cassiopeiae, the central star of the W.

An imaginary line extended from Schedar, the bottom right star of the W, through Caph, leads to Messier 52, a magnitude 5.0 open cluster visible in binoculars. Several notable deep sky objects can be seen in the vicinity of M52: the Bubble Nebula (NGC 7635), a magnitude 10 emission nebula, and the emission nebula Sharpless 157 (the Lobster Claw Nebula) in Cassiopeia, and the open cluster NGC 7510 and the nebula NGC 7538 (Dreyer’s Object) in the neighbouring constellation Cepheus.

Caph is located in the constellation Cassiopeia. Representing the vain and boastful Queen Cassiopeia in Greek mythology, the constellation lies in the vicinity of several other constellations associated with the myth of Perseus: Andromeda, Perseus, Cepheus, Pegasus, and Cetus. All these are among the 48 Greek constellations, first listed by the astronomer Claudius Ptolemy in his Almagest in the 2nd century CE. Cassiopeia is the 25th constellation in size, occupying an area of 598 square degrees of the northern sky. It is circumpolar to northern observers, i.e. it never sets and can be seen year-round, but it never rises for many observers living south of the equator.

The most famous deep sky objects in Cassiopeia include the bright open clusters Messier 52, Messier 103, NGC 7789 (the White Rose Cluster or Caroline’s Rose), NGC 457 (the E.T. Cluster) and NGC 663, the two large neighbouring emission nebulae known as the Heart Nebula (IC 1805) and the Soul Nebula (IC 1848), the H II region NGC 281, nicknamed the Pacman Nebula, and the irregular starburst galaxy IC 10, one of our neighbours in the Local Group.

The best time of year to see the stars and deep sky objects in Cassiopeia is during the month of November, when the constellation is prominent in the evening sky. The entire constellation is visible from locations between the latitudes 90° N and 20° S.