Segin, Epsilon Cassiopeiae (ε Cas), is a blue-white star located in the constellation Cassiopeia. With an apparent magnitude of 3.37, it is the constellation’s fifth brightest star, after Gamma Cassiopeiae, Schedar, Caph and Ruchbah. Segin lies at an approximate distance of 410 light years from Earth. It is the faintest of the five stars that form Cassiopeia’s W.

Segin has the stellar classification B3 V, indicating a main sequence star still fusing hydrogen in its core, appearing blue or blue-white in colour. It is sometimes classified as a giant star of the spectral type B3 III.

Segin has a mass about 9.2 times that of the Sun and a radius 6 times solar. The radius is derived from the interferometrically measured angular diameter of 0.43 milliarcseconds.

With an effective temperature of 15,174 K, Segin shines with 2,500 solar luminosities. It has a projected rotational velocity of 30 km/s. Its estimated age is 15.4 million years. A study published in 1993 listed Segin as one of the known Be stars without an “e” or “shell” classification in the Bright Star Catalogue. Be stars are class B stars with lines of hydrogen in their spectra, indicating the presence of a circumstellar disk of gas ejected from the star.

Hipparcos measurements in the early 1990s suggested that Segin may be slightly variable. The star’s brightness varies with an amplitude of 0.0025 over a period of 2.15 hours.

Hipparcos observations also placed the star in the disputed Cassiopeia-Taurus (Cas-Tau) moving group, suggesting a likelihood of 93% that it is a member. The association may be physically related to the Alpha Persei Cluster as they share a similar velocity and distance. A study published in 1999 confirmed Mirfak (Alpha Persei) to be a member, which suggests that the Cas-Tau association, including Segin, was separated from the Alpha Persei Cluster through tidal interactions over time. 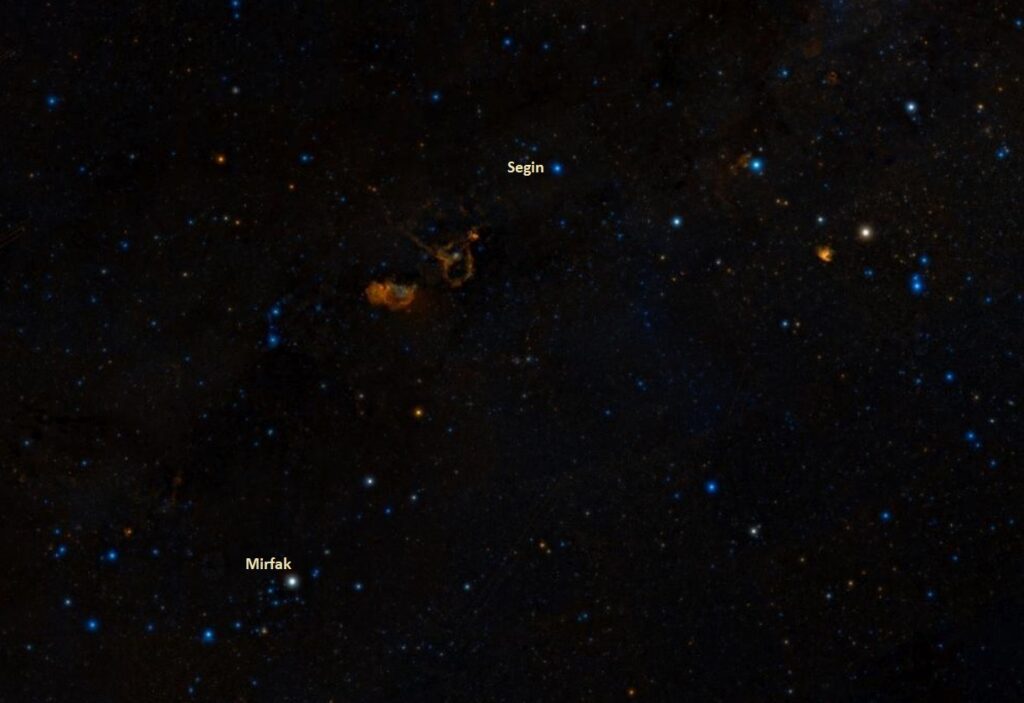 Of the five stars, Gamma Cassiopeiae is the only one that is hotter (25,000 K), more massive (17 solar masses), more luminous (34,000 solar luminosities), and younger (8 million years) than Segin. Even though it is the second most luminous of the W stars, Segin is the faintest because it is also the second most distant. Only Gamma Cassiopeiae is more distant, lying about 550 light years away. Schedar, Caph, and Ruchbah are much closer to us, at 228, 54.7, and 99.4 light years respectively.

The origin of the name Segin (pronunciation: /ˈsɛɡɪn/) is uncertain. It may be a mistranscription of Seginus, another name with an uncertain origin, which now formally applies to Gamma Boötis.

The name was officially approved by the International Astronomical Union’s (IAU) Working Group on Star Names (WGSN) on September 5, 2017.

Epsilon Cassiopeiae once shared the name Ruchbah with Delta Cassiopeiae, which has kept the name.

Segin is very easy to find because it is part of Cassiopeia’s W, one of the most familiar star patterns in the northern sky. Segin is the leftmost star of the W. 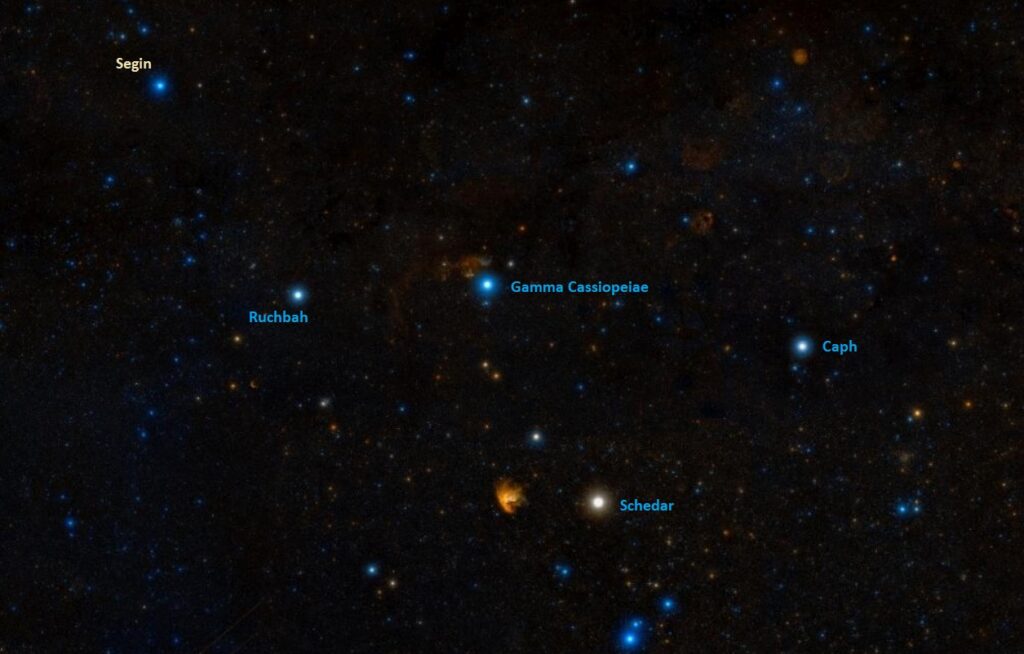 Two bright, large and well-known deep sky objects lie east-southeast of Segin: the neighbouring emission nebulae IC 1805 and IC 1848, better known as the Heart and Soul nebulae, and the neighbouring open clusters NGC 869 and NGC 884, also known as the Double Cluster. The Heart and Soul nebulae lie in Cassiopeia and the Double Cluster is in the constellation Perseus. Cassiopeia is part of the Perseus family of constellations, associated with the myth of Perseus. The group also includes the nearby constellations Perseus, Andromeda, Cepheus, Pegasus and Cetus.

Cassiopeia is also home to the supernova remnants Cassiopeia A, the brightest radio source in the sky outside the solar system, and Tycho’s Supernova, the remnant of a Type Ia supernova (SN 1572) that peaked at magnitude -4 in November 1572.

The best time of year to see the stars and deep sky objects of Cassiopeia is during the month of November, when the constellation is prominent in the evening sky. The entire constellation can be seen from locations between the latitudes 90° N and 20° S.