Sadr, Gamma Cygni (γ Cyg) is a yellow-white supergiant star located in the constellation Cygnus. With an apparent magnitude of 2.23, it is the constellation’s second brightest star, after Deneb. Sadr lies at an approximate distance of 1,800 light years from Earth. It is the star that marks the intersection of the Northern Cross, a bright asterism that dominates the summer sky in the northern hemisphere. Sadr lies in a rich field of the Milky Way and is surrounded by the diffuse emission nebula IC 1318, also known as the Gamma Cygni Nebula or Sadr Region.

Sadr is a supergiant star of the spectral type F8 Iab, appearing yellow-white in colour. It has a mass 12.11 times that of the Sun and has expanded to a size of about 150 solar radii. With a surface temperature of 5,790 K, the star has a bolometric luminosity 33,023 times that of the Sun. Its estimated age is 12 million years. Even though it is relatively young, it has already evolved away from the main sequence and its mass seals its supernova fate down the line.

Sadr is surrounded by the emission nebula IC 1318, one of the several nebulous regions at the centre of the Northern Cross. IC 1318 is known as the Gamma Cygni Nebula, Sadr Region or the Butterfly Nebula. It is not physically related to Sadr, but merely lies in the same line of sight. The nebula is located much farther away than the star, at a distance of 4,900 light years. The star that illuminates IC 1318 is a hot, blue O9-class star obscured by interstellar dust. 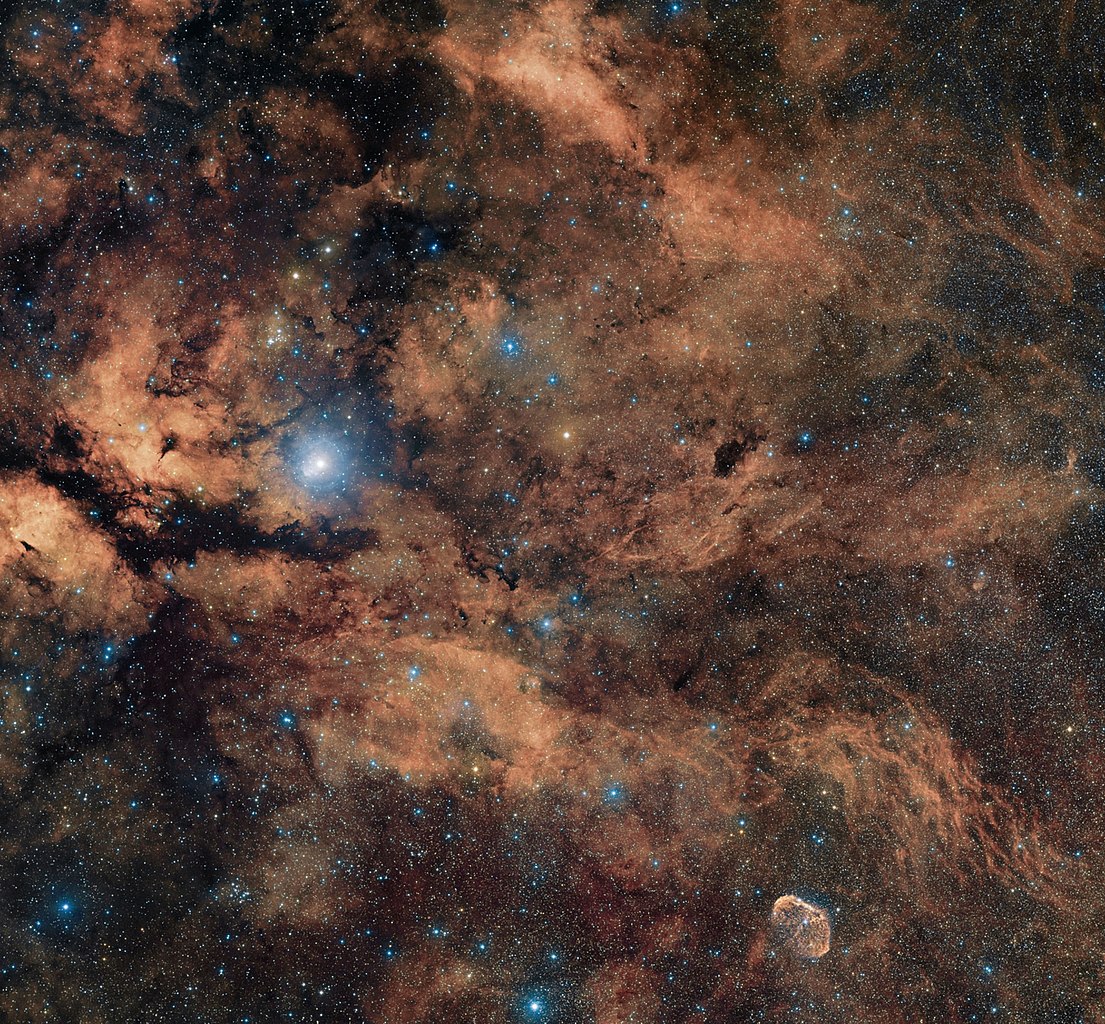 Sadr is the central star of the Northern Cross, also formed by the bright Deneb (Alpha Cygni), Albireo (Beta Cygni), Aljanah (Epsilon Cygni) and Fawaris (Delta Cygni). Deneb, Sadr and Albireo form the pole of the cross, while Aljanah and Fawaris mark the crossbeam.

The spectrum of Sadr has served as one of the anchor points for the Morgan-Keenan (MK) system of stellar classification, used to classify other stars, since 1943.

The name Sadr (pronunciation: /ˈsædər/) comes from the Arabic ṣadr, meaning “chest.” It has the same etymology as the name of Alpha Cassiopeiae, Schedar. The name has also been spelled Sadir or Sador. It refers to the star’s position in the constellation, marking the Swan’s chest.

The name was officially approved by the International Astronomical Union’s (IAU) Working Group on Star Names (WGSN) on August 21, 2016. It formally applies only to Gamma Cygni A. 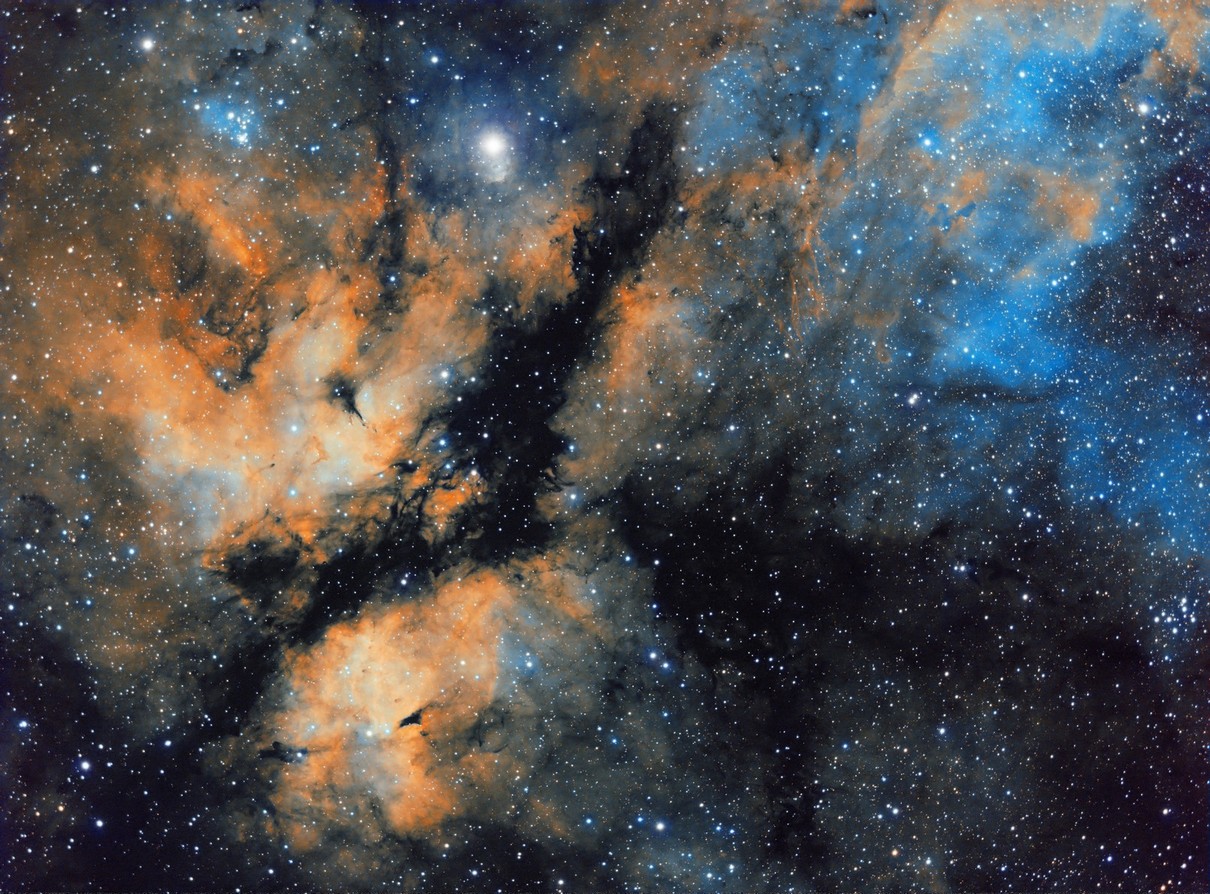 Egyptian astronomer Al Achsasi al Mouakket listed the star as Sadr al Dedjadjet, meaning “the hen’s chest,” in his Calendarium, written in the 17th century. The name was later translated into Latin as Pectus Gallinae.

Sadr is very easy to find because it lies at the intersection of the bright, large Northern Cross asterism. The Northern Cross is easy to spot on a clear night. It lies within the larger Summer Triangle, a brighter summer asterism formed by Deneb with Vega in the constellation Lyra and Altair in Aquila. 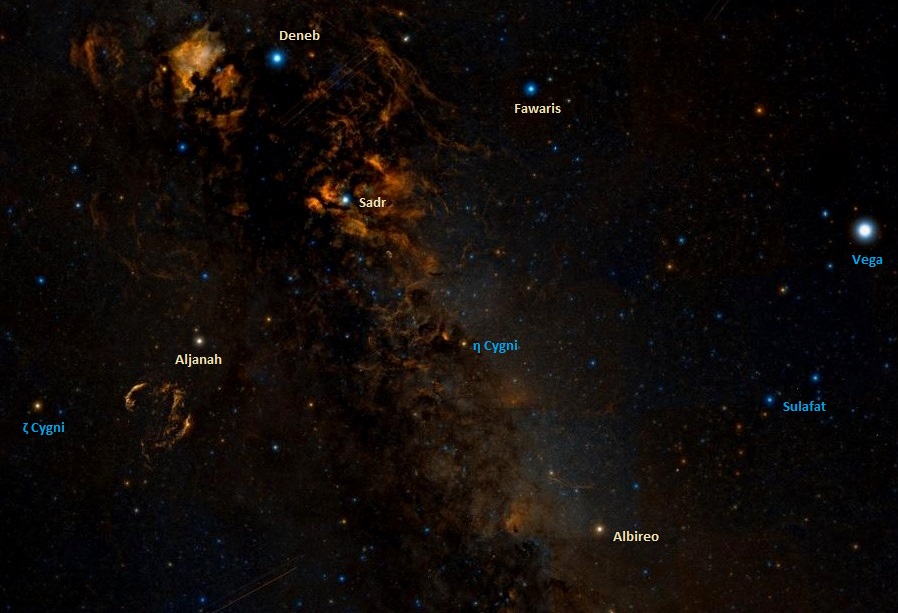 Sadr is located in the vicinity of several interesting deep sky objects. The Rocking Horse Cluster (NGC 6910) is an open cluster located only half a degree east and a little north of the star. It is at a similar distance as the Gamma Cygni Nebula and may be physically associated with it. The cluster has an apparent magnitude of 7.4 and occupies an area of 10’. The neighbouring open cluster Collinder 419 (Cr 419) is only slightly fainter, with a visual magnitude of 7.60. 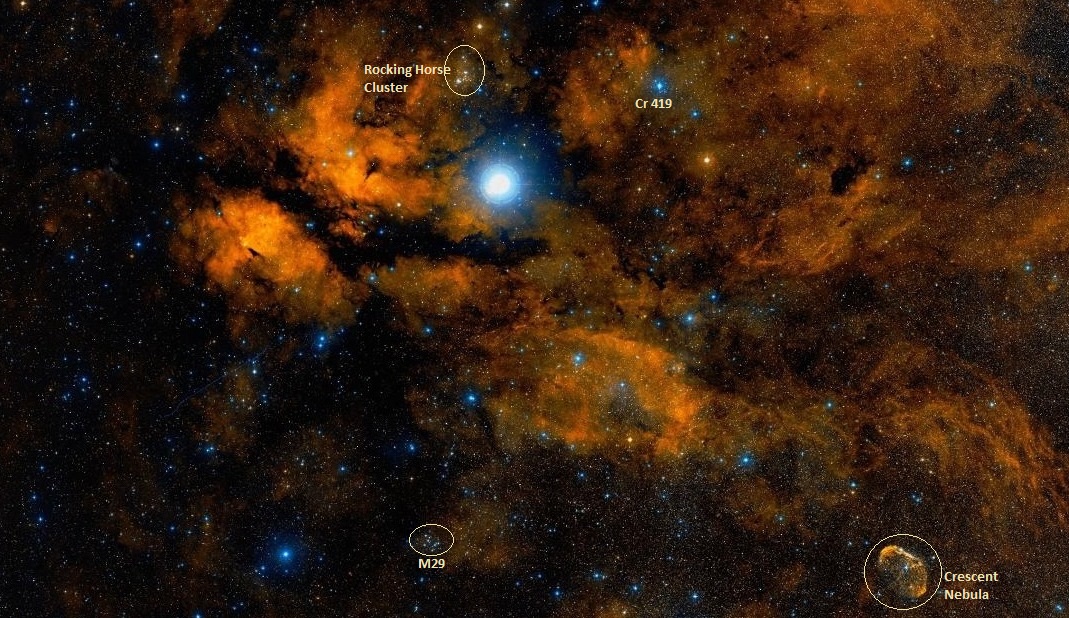 The open cluster Messier 29 lies 1.7 degrees south and a little east of the star, while the emission nebula NGC 6888, also known as the Crescent Nebula, can be found about 2 degrees southwest of Sadr.

Sadr is located in the constellation Cygnus. Representing the celestial Swan, Cygnus is one of the larger northern constellations, stretching across 804 square degrees of the apparent sky. It is known mainly for the Northern Cross and its bright stars Deneb, the 19th brightest star in the sky, and Albireo, a famous contrasting double star. The best time of year to see the stars and deep sky objects in the constellation is during the month of September.