Ruchbah, Delta Cassiopeiae (δ Cas) is an eclipsing binary star system located in the constellation Cassiopeia. With an apparent magnitude of 2.68, it is the fourth brightest star in Cassiopeia, after Gamma Cassiopeiae, Schedar and Caph. Ruchbah lies at a distance of 99.4 light years from Earth. It is one of the five bright stars that form Cassiopeia’s conspicuous W asterism.

Ruchbah has the stellar classification A5 IV, indicating a subgiant star appearing white in colour. The star has burned though the hydrogen in its core and evolved away from the main sequence. It has a mass 2.49 times that of the Sun and a radius 3.90 times solar. With an effective temperature of 7,980 K, it is 72.88 times more luminous than the Sun. The star is a fast spinner, with a projected rotational velocity of 123 km/s. Its estimated age is 600 million years.

A 2006 study revealed an excess infrared emission from the star at a wavelength of 60 μm, indicating a circumstellar debris disk with a derived orbital radius of 88 astronomical units. Ruchbah is the primary component in an eclipsing binary system with an orbital period of 759 days. Every 759 days, the star system’s brightness drops by 0.07 magnitudes when the fainter companion passes in front of the primary star. A 2005 catalogue of eclipsing variables lists the star system as an Algol-type variable, even though a 2000 study using data obtained with the Hipparcos satellite did not find variations by more than 0.01 magnitudes.

Ruchbah is the second oldest of the five stars. Only Caph, the rightmost star of the W, is older, with an age of more than a billion years. Caph is also the only one that is closer to us, at a distance of 54.7 light years, and the only star that is smaller, less massive and less intrinsically luminous than Ruchbah.

The star’s traditional name Ruchbah (pronunciation: /ˈrʌkbə/) comes from the Arabic rukbah, meaning “knee.” It refers to the star’s position in the constellation, marking the knee of the mythical Queen Cassiopeia. The name was officially approved by the International Astronomical Union’s (IAU) Working Group on Star Names (WGSN) on August 21, 2016. It formally applies only to the component Delta Cassiopeiae Aa.

Delta Cassiopeiae once shared the name Ruchbah with the blue dwarf Alpha Sagittarii, which marks the knee of Sagittarius, the Archer. The name that was formally approved for Alpha Sagittarii has the alternative spelling, Rukbat.

Delta Cassiopeiae was also once known as Ksora. The name appeared in the Czech astronomer Antonín Bečvář’s Atlas Coeli (1951), but its origin is unknown.

Ruchbah is easy to identify because it is part of Cassiopeia’s W, one of the most familiar patterns in the northern sky. It is the bottom left star in the asterism. With a declination of +60° 14’, Ruchbah is visible from all locations north of the latitude 29° S, but never rises very high for observers south of the equator. 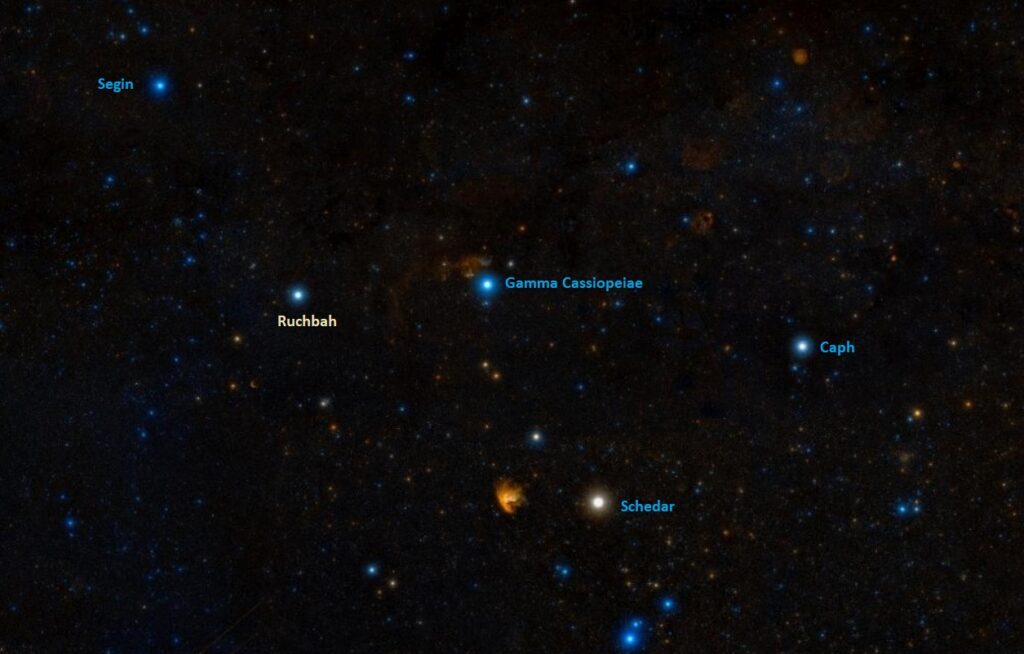 Ruchbah lies against the backdrop of the Milky Way and can be used to find a number of interesting deep sky objects. The bright (mag. 7.4) open cluster Messier 103 lies only a degree east of the star, in the direction of Segin, the upper left star of the W. 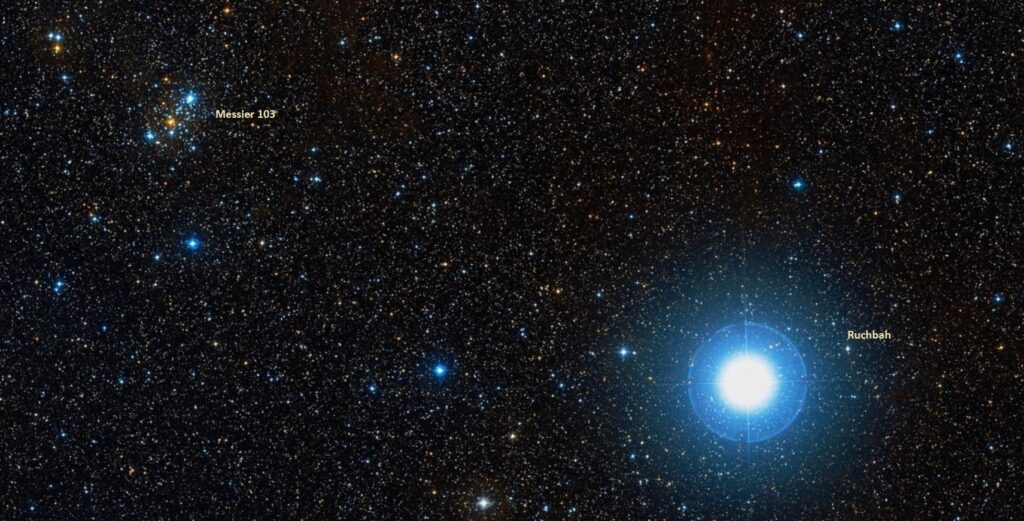 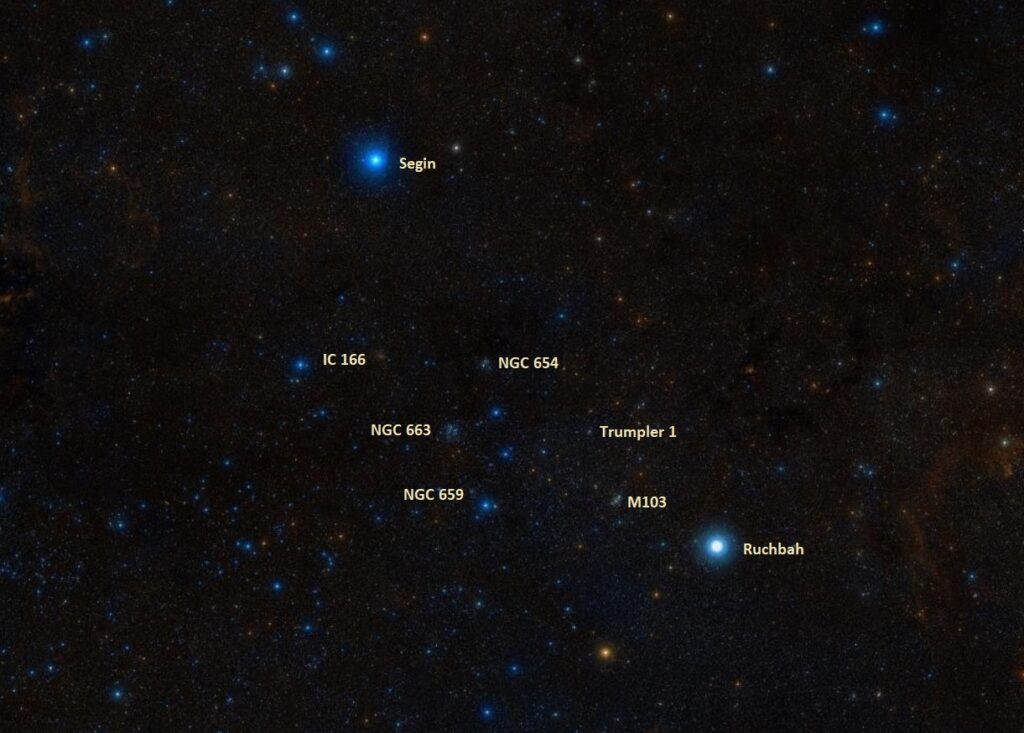 Going in the other direction, the open clusters NGC 457 and NGC 436 appear near the star. Nicknamed the E.T. Cluster, NGC 457 occupies 13’ degrees of the sky and has an apparent magnitude of 6.4. It lies 7,922 light years away. NGC 436 is considerably fainter, with a visual magnitude of 8.8. 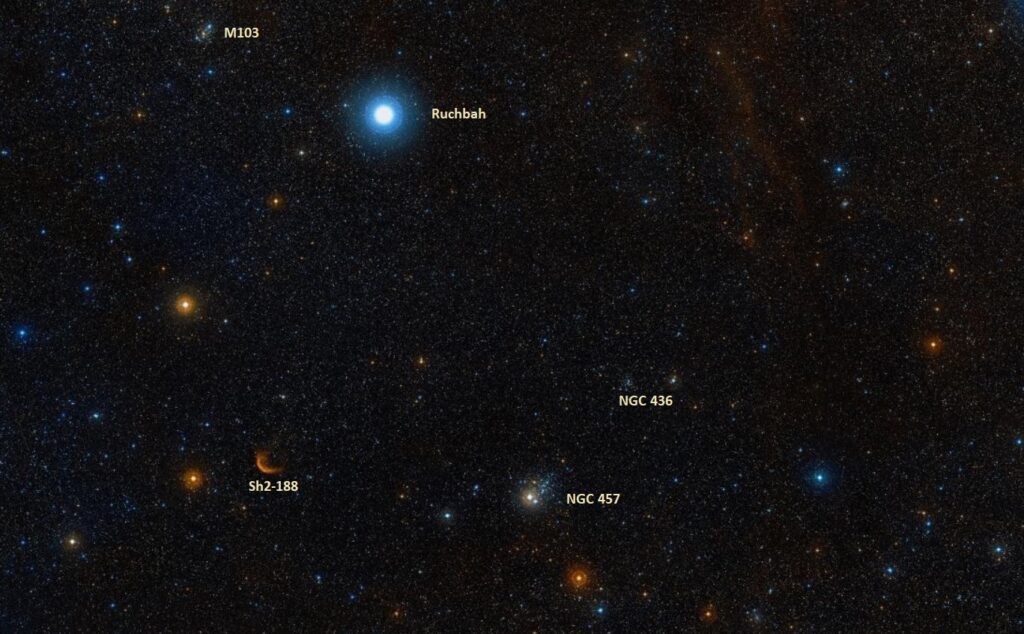 The Dolphin Nebula (Sharpless 188, Sh2-188) appears east of NGC 457. It is a planetary nebula located at an approximate distance of 850 light years.

Ruchbah is located in the constellation Cassiopeia. Representing the mythical queen punished for her vanity in Greek lore, Cassiopeia is one of the ancient Greek constellations, first listed by Ptolemy of Alexandria in his Almagest in the 2nd century CE.

Cassiopeia lies in a region of the sky populated by several constellations associated with the myth of Perseus: Perseus, Andromeda, Cepheus and Pegasus. It is the 25th largest of all 88 constellations, stretching across an area of 598 square degrees of the northern sky. Cassiopeia is best known for the W asterism, formed by its five brightest stars, and for several famous deep sky objects that lie within its borders. These include the Heart and Soul nebulae (IC 1805 and IC 1848), two large neighbouring emission nebulae, the emission nebulae NGC 7635 (the Bubble Nebula) and NGC 281 (the Pacman Nebula), the irregular galaxy IC 10, and the bright open clusters Messier 52, Messier 103, NGC 7789 (the White Rose Cluster), NGC 457 (the E.T. Cluster), NGC 663, and NGC 654. Cassiopeia is also home to two notable supernova remnants: Cassiopeia A, the brightest radio source in the sky outside the solar system, and Tycho’s Supernova (SN 1572, 3C 10), the remnant of a Type Ia supernova first observed in November 1572.

The best time of year to see the stars and deep sky objects of Cassiopeia is during the month of November, when the constellation rises high in the evening sky. Cassiopeia is visible in its entirety from locations between the latitudes 90° N and 20° S.