Bellatrix, Gamma Orionis (γ Ori), is the third brightest star in Orion constellation, after Rigel and Betelgeuse, and the 26th brightest star in the sky. With an apparent magnitude that varies from 1.59 to 1.64, it is usually just a little fainter than Shaula in the constellation Scorpius and Gacrux in Crux, and it just outshines Elnath in Taurus, Miaplacidus in Carina, and its Orion neighbour Alnilam. Bellatrix lies at a distance of 250 light years from Earth.

Also known as the Amazon star, it marks the left shoulder of Orion and is one of the seven bright stars that outline the celestial Hunter’s familiar hourglass figure.

Bellatrix has a mass 8.6 times that of the Sun and a radius 5.75 times solar. With an effective surface temperature of 21,700 K, it shines with 9,211 solar luminosities. The star’s estimated age is 25.2 million years, which means that it won’t be long before it runs out of its supply of hydrogen and evolves into a subgiant and then into an orange giant. Bellatrix is not quite massive enough to go out as a supernova, so it will probably end up expelling its outer layers to form a planetary nebula, leaving behind a hot white dwarf to illuminate the expanding shell of gas. With a mass 8.6 times solar, however, it is close to being a supernova candidate.

A study published in 2011 identified Bellatrix as double-lined, which suggests that it may be a spectroscopic binary system. However, observations carried out the same year did not find any potential companions that share a proper motion with the star. There were only three candidates that were found to be significantly more distant.

Bellatrix is one of the four Orion stars selected for navigation. The other three navigational stars in the constellation are the supergiants Rigel, Betelgeuse and Alnilam.

Bellatrix was once believed to belong to the Orion OB1 association, like the stars of Orion’s Belt (Alnilam, Alnitak and Mintaka). However, at a distance of 250 light years, it is much closer to us than Orion OB1 stars, which lie at distances of over 1,000 light years.

Bellatrix once served as a spectral and photometric standard, but the star’s properties have been shown to be undependable. In 1963, it was one of the bright stars used to define the UBV photometric system, which is used for classifying stars based on their colours. The stars were used as standards to check for variability of other stars and the apparent magnitude of 1.64 was set for Bellatrix. However, a photometry survey conducted in 1988 showed that the star itself was variable, with variations in magnitude from 1.59 to 1.64.

In 1971, Bellatrix was used as a spectral standard for the spectral class B2 III as part of an effort to create a reference frame for the classification of class O and early B stars. However, an analysis of the star’s properties has shown it to be a main sequence star (V), not a giant (III). A study published in 2004 was the first to raise a concern about the star’s spectral type being incorrect.

Complicating things further, a 2011 study of the star’s spectrum suggested that Bellatrix was not a single star, but a spectroscopic binary system consisting of two stars with similar properties, both less luminous than a B2-type giant would be. If Bellatrix is in fact a double-lined spectroscopic binary star (SB2), the companion is also an early or mid B-type star.

Like many other bright stars, Bellatrix is part of traditional lore across many different cultures. Bellatrix, Betelgeuse and Meissa, the star that marks Orion’s head, were the Euphratean Constellation of the King, or Kakkab Sar, which was believed to bring good fortune, wealth, and military honours. 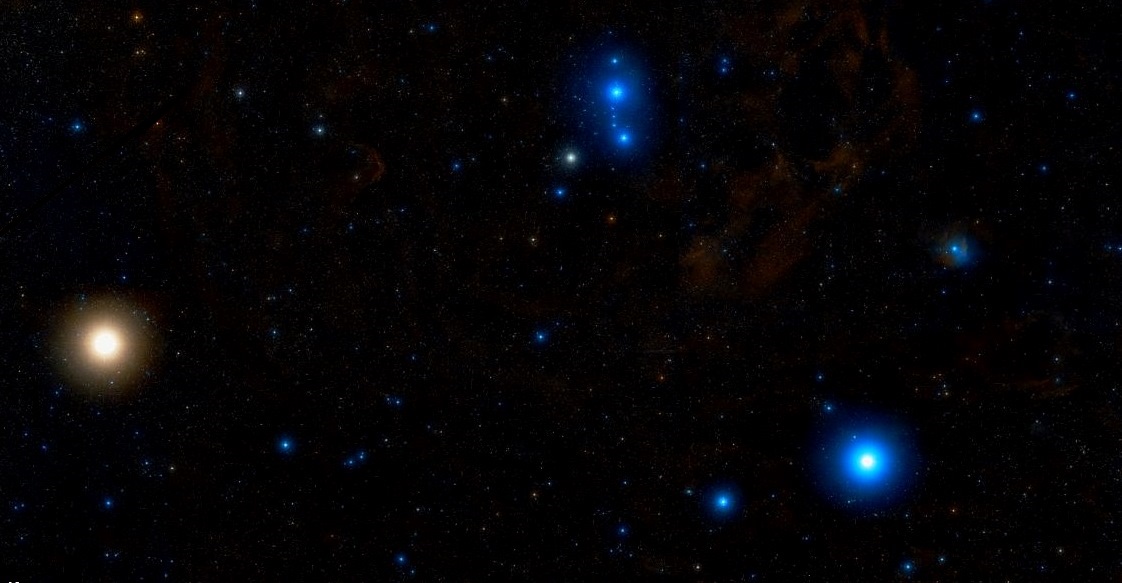 The Inuit knew Betelgeuse and Bellatrix as Akuttujuuk, which means “those (two) placed far apart.” The two stars appearing above the southern horizon marked the coming of spring and the return of daylight in Arctic latitudes.

In Amazon River lore, the star represented a Young Boy in a Canoe chasing a dark spot, Peixie Boi, in the sky with an old man, represented by Betelgeuse.

Like other exceptionally bright stars, Bellatrix has often been used in works of fiction. The best known uses and mentions include Samuel R. Delany’s novel Babel-17 (1966), the 1968 film Planet of the Apes, and the Harry Potter series (1997-2007) by J.K. Rowling, where one of the followers of Lord Voldemort shares the star’s name (and her extended family includes characters named Sirius, Regulus and Draco). The star may have also been referenced as the “shoulder of Orion” in the “Tears in the rain” soliloquy in Blade Runner (1982), but it is uncertain if the dying replicant Roy Batty meant the left shoulder (Bellatrix) or the right (Betelgeuse).

The name Bellatrix comes from the Latin bellātrix, meaning “female warrior.” The name was first mentioned in the works of the 9th century Persian astronomer Abu Maʿshar and their translations from Arabic into Castilian by John of Seville in the 12th century. In Abu Ma’shar’s writings, the name applied to Capella, but was switched to Gamma Orionis by the Vienna school of astronomers in the 15th century and it stuck. It appeared in the subsequent reprints of the Alfonsine Tables.

Bellatrix has also been known by many other names. The best known of these is Amazon Star. In his 1899 book Star Names: Their Lore and Meaning, Richard Hinkley Allen suggests that this name is a loose translation of the star’s Arabic name, Al Najid, meaning “the conqueror,” which appeared in the works of the 13th century Persian astronomer Zakariya al-Qazwini. The 15th century Timurid astronomer Ulugh Beg called the star Al Murzim al Najid, or “the roaring conqueror,” while the 17th century English orientalist Thomas Hyde referred to it as the Conquering Lion. The Murzim part of the name, meaning “herald,” now appears as Mirzam (Beta Canis Majoris), the star that heralds the rising of Sirius.

The Chinese know Bellatrix as the Fifth Star of Three Stars, referring to the Chinese Three Stars asterism, which originally only included Orion’s Belt stars Alnilam, Alnitak and Mintaka, but was later expanded to include additional Orion stars.

The 17th century Egyptian astronomer Al Achsasi al Mouakket listed the star as Menkib al Jauza al Aisr in his Calendarium. The name was later translated into Latin as Humerus Sinister Gigantis, a reference to the star’s position at the left shoulder of the giant (Orion).

Bellatrix is very easy to find because it is bright and part of one of the most familiar shapes in the night sky. It outlines Orion’s hourglass pattern with the bright Rigel, Betelgeuse, Saiph and the three stars of Orion’s Belt, Alnitak, Alnilam and Mintaka. Bellatrix marks the left shoulder of Orion, appearing right from our perspective, and is located about 5 degrees west (or right) of Betelgeuse. The best time of year to see Bellatrix and other Orion stars is during the month of January, when the constellation dominates the evening sky.

Bellatrix is located in the constellation Orion. Representing the celestial Hunter, Orion is one of the most recognizable constellations in the sky. Known since prehistory, it is home to two of the 10 brightest stars in the sky – Rigel and Betelgeuse – and a number of well-known deep sky objects. These include the Orion Nebula (Messier 42), the nearest region of massive star formation to Earth, the neighbouring De Mairan’s Nebula (Messier 43), the reflection nebula Messier 78, the dark Horsehead Nebula (Barnard 33), and the emission nebulae NGC 2024 (Sharpless 277), also known as the Flame Nebula, Sharpless 276 (Barnard’s Loop), Sharpless 279 with the Running Man Nebula, and NGC 2174, also known as the Monkey Head Nebula.

Orion also contains one of the best known asterisms in the sky, Orion’s Belt. Formed by the bright Alnitak, Alnilam and Mintaka, which share a common origin in the Orion OB1 association and move together through space, the asterism has retained the same appearance for millennia and is associated with countless myths around the world.