Menkar, Alpha Ceti (α Cet), is a red giant star located in the constellation Cetus, the Whale. It is one of the stars that outline the head of Cetus. With an apparent magnitude of 2.53, it is the second brightest star in the constellation, after Diphda. Menkar lies at an approximate distance of 249 light years from Earth.

Menkar has the stellar classification M1.5 IIIa, indicating a luminous red giant. The star has an absolute magnitude of -3.2. With an effective temperature of 3,795 K, it is about 1,455 times more luminous than the Sun, but most of its energy output is in the invisible infrared.

Menkar has a mass 2.3 times that of the Sun and has expanded to a size of about 89 solar radii as it evolved away from the main sequence. It is currently on the asymptotic giant branch (AGB), the late stage in a life of a star with up to nine solar masses. AGB stars have inert carbon-hydrogen cores surrounded by inner layers where helium is being fused into carbon and outer layers where hydrogen is fused into helium. Their outer envelopes are highly convective. As it evolves through this phase, Menkar may begin to pulsate with increasingly large amplitudes, like its neighbour Mira, until its outer layers are cast into space to form a planetary nebula and leaving behind a hot white dwarf. Menkar is a relatively slow spinner, with a projected rotational velocity of 6.9 km/s.

The star is a suspected long-period variable. A 2002 study found it to vary in brightness, but only very slightly, by about one hundredth of a magnitude.

Menkar and the brighter Diphda (Beta Ceti), a star in the tail of Cetus, are among the 58 bright stars selected for navigation. These stars are particularly useful in the field of celestial navigation because they are both bright and easy to recognize. Menkar and Diphda are part of a group of navigational stars that lie in the equatorial region of the eastern celestial hemisphere. The group also includes Hamal in the constellation Aries, Aldebaran and Elnath in Taurus, Pollux in Gemini, Sirius and Adhara in Canis Major, Procyon in Canis Minor, Alphard in Hydra, and four bright stars in Orion: Rigel, Betelgeuse, Bellatrix and Alnilam. 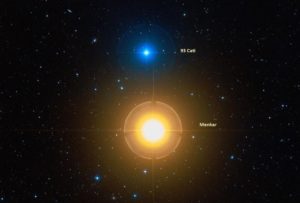 Menkar and the fainter (mag. 5.62) blue-white star 93 Ceti form a striking visual double but are not physically related. 93 Ceti lies at a much greater distance (550 light years) from Earth and has a luminosity 321 times that of the Sun.

Menkar was memorably used in the episode “Space Seed” (1967) of Star Trek: The Original Series and in the feature film Star Trek II: The Wrath of Khan (1982). In the series, Khan Noonien Singh and his followers, a group of genetically engineered humans, are exiled to an uncolonized planet called Ceti Alpha V (orbiting Ceti Alpha, i.e. Alpha Ceti), where they are found by Captain Clark Terrell and Commander Pavel Chekhov 15 years later in the feature film. The planet is revisited in Star Trek: Enterprise, in the episode “Twilight” (2003), where it is the home of what is left of humankind after the Xindi destroy the Earth in an alternate timeline.

The name Menkar (pronunciation: /ˈmɛŋkɑːr/) is derived from the Arabic manħar, meaning “nostril.” It refers to the nostril of Cetus, the Sea Monster. Alpha Ceti once shared this name with Lambda Ceti, its neighbour in the head of Cetus. Even though the name suggests otherwise, Menkar marks the jaws of Cetus. 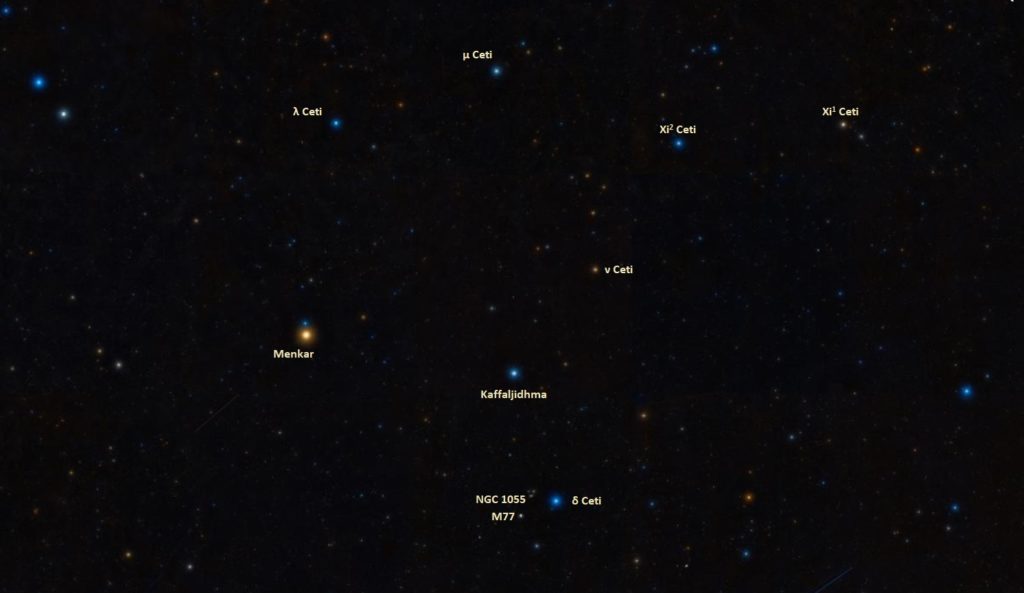 The head of Cetus, image: Wikisky

The name was officially approved by the International Astronomical Union’s (IAU) Working Group on Star Names (WGSN) on June 30, 2016.

The three Andromeda stars are easily identified because Alpheratz sits at the northeast vertex of the Great Square of Pegasus, a prominent asterism also formed by the bright Pegasus stars Algenib, Markab and Scheat. Alpheratz is the first in a line of three stars between the constellations Pegasus and Perseus. Mirach, the middle star in the chain, is also commonly used to find the Andromeda Galaxy (Messier 31) and the Triangulum Galaxy (Messier 33), while Almach makes it easy to identify Mirfak and Algol in Perseus.

The Aries stars – Hamal and Sheratan – are easy to identify because they form a distinct flat triangle asterism with the fainter Mesarthim.

On a clear night, Menkar can also be found using Aldebaran and the stars of the Hyades cluster, which outline the head of Taurus. The V-shaped head of the celestial Bull points in the direction of Menkar. 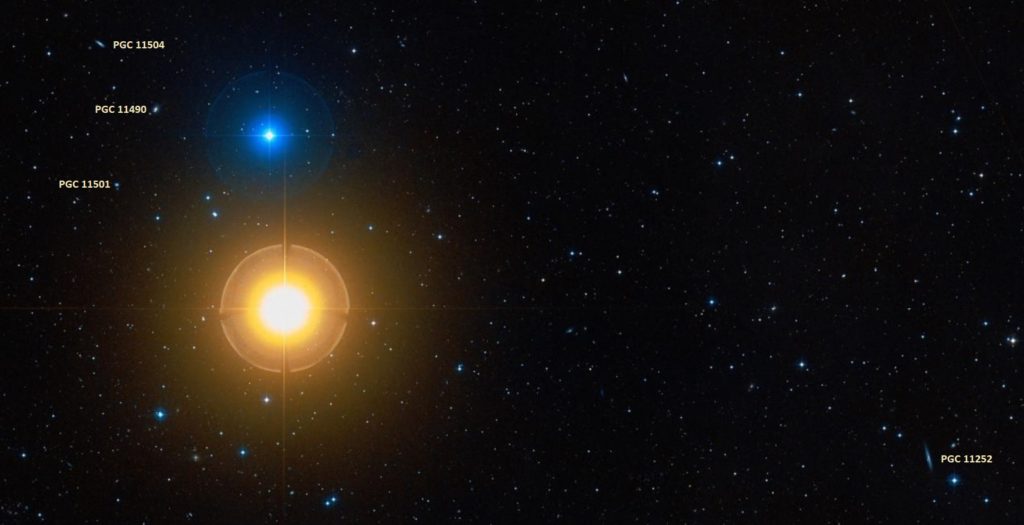 The galaxies near Menkar, image: Wikisky

Menkar is located in the constellation Cetus. Representing the sea monster from the Greek myth of Andromeda, the constellation is the fourth largest in the sky, after Hydra, Virgo, and Ursa Major. Also known as the Whale, Cetus occupies 1,231 square degrees between Pisces, Aries, Aquarius, Eridanus, Taurus, Fornax, and Sculptor. It is one of the Greek constellations, first listed by the astronomer Claudius Ptolemy of Alexandria in the 2nd century CE.

Cetus is home to the variable stars Mira (Omicron Ceti) and UV Ceti, each a prototype for its own class of variables, and to Tau Ceti, the nearest single G-star (solar analogue) to the Sun, which hosts five candidate planets.

Notable deep sky objects in Cetus include the barred spiral galaxy Messier 77 (Cetus A), the spiral galaxies NGC 247, NGC 1042, NGC 1035, and NGC 1055, the irregular dwarf galaxy IC 1613, and the bright planetary nebula catalogued as NGC 246 and known as the Cetus Ring or Skull Nebula.