Baten Kaitos, Zeta Ceti (ζ Cet), is a double star located in the constellation Cetus. It marks the belly of Cetus, the mythical sea monster associated with the myth of Perseus. With an apparent magnitude of 3.742, it is usually the eighth brightest star in Cetus (when it is not outshone by the variable Mira). It lies at an approximate distance of 235 light years from Earth.

Zeta Ceti is a binary star system consisting of an orange giant star of the spectral type K0 III Ba0.1 (some sources give the spectral class K0.5 III) and a companion that cannot be resolved in telescopes. The suffix “Ba0.1” indicates that the primary component is a weak barium star. Barium stars are not uncommon in binary systems. The overabundance of barium is believed to be the result of mass transfer that occurred when the giant star was still on the main sequence and the secondary component was a carbon star on the asymptotic giant branch (AGB).

The Zeta Ceti system is a single-lined spectroscopic binary, which means that only the giant star is seen and the existence of the companion is inferred by the primary component’s spectral lines shifting towards the blue, then towards red, and then blue again, indicating that the star is moving toward and away from us, i.e. orbiting around an unseen centre of mass. The stars in the Zeta Ceti system orbit each other with a period of 4.5 years and an eccentricity of 0.59. The primary star has a mass 2.34 times that of the Sun and, having exhausted the supply of hydrogen to burn in its core, it has expanded to a radius 25 times solar. With a surface temperature of 4,581 K, it shines with 240 solar luminosities. The star is a relatively slow spinner, with a projected rotational velocity of 3.2 km/s. Its estimated age is about 1.24 billion years. 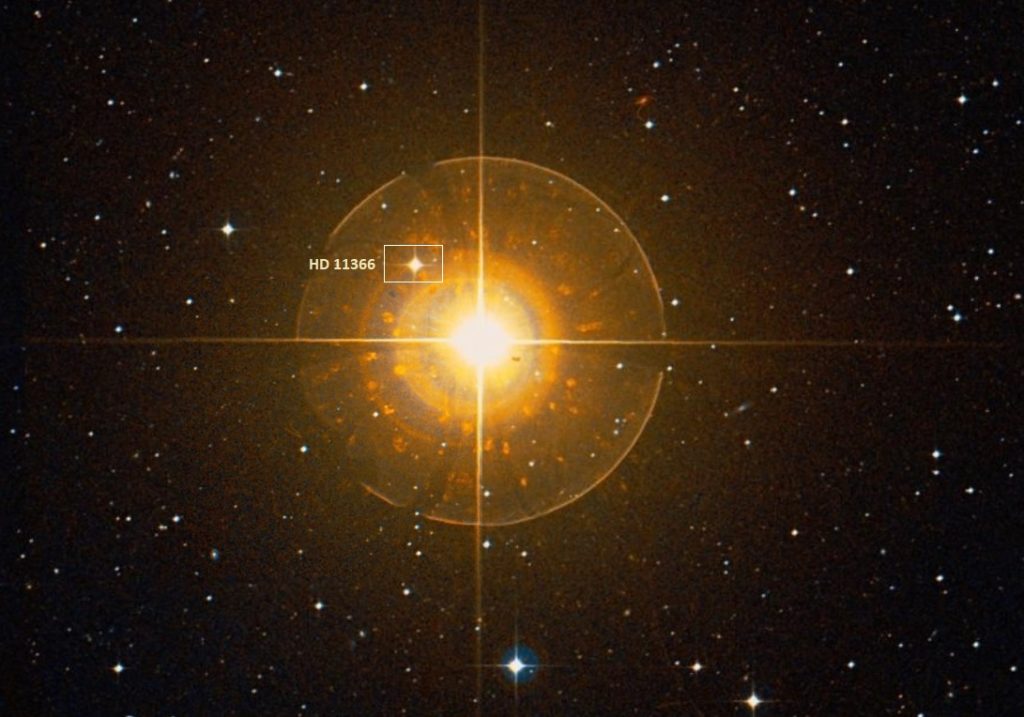 The name Baten Kaitos (pronunciation: /ˈbeɪtən ˈkeɪtɒs/) comes from the Arabic phrase batn qaytus, meaning “the belly of the sea monster.” It refers to the star’s position in the constellation Cetus.

The name was officially approved by the International Astronomical Union’s (IAU) Working Group on Star Names (WGSN) on September 12, 2016. It formally applies only to the component Zeta Ceti Aa but has traditionally been used for the whole system.

Baten Kaitos marks the belly of Cetus and is located in the area between the brighter Diphda in the sea monster’s tail and Menkar in its head. It can be found using the bright stars that form the Great Square of Pegasus: Alpheratz, Scheat, Markab, and Algenib. A line drawn from Scheat through Algenib points in the direction of Zeta Ceti. 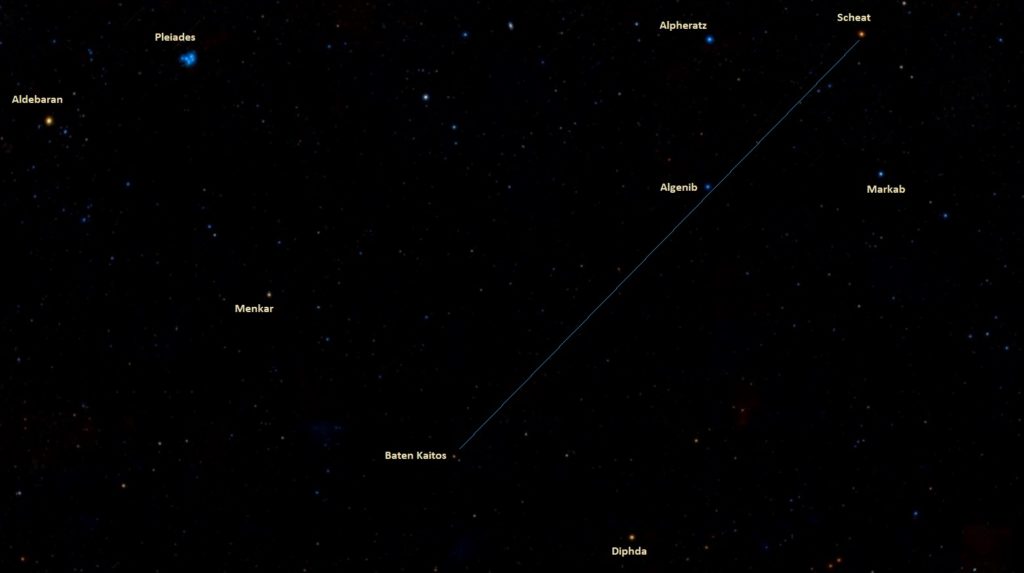 The star Chi Ceti lies in the same field of view as Baten Kaitos and can be seen without binoculars under good viewing conditions. It is a double star consisting of the brighter component HD 11171 (mag. 4.66) and the fainter HD 11131 (6.75). The stars share a similar proper motion and are believed to be physical companions. The Chi Ceti system is considerably closer to us than Zeta Ceti. It lies at a distance of 75.6 light years. 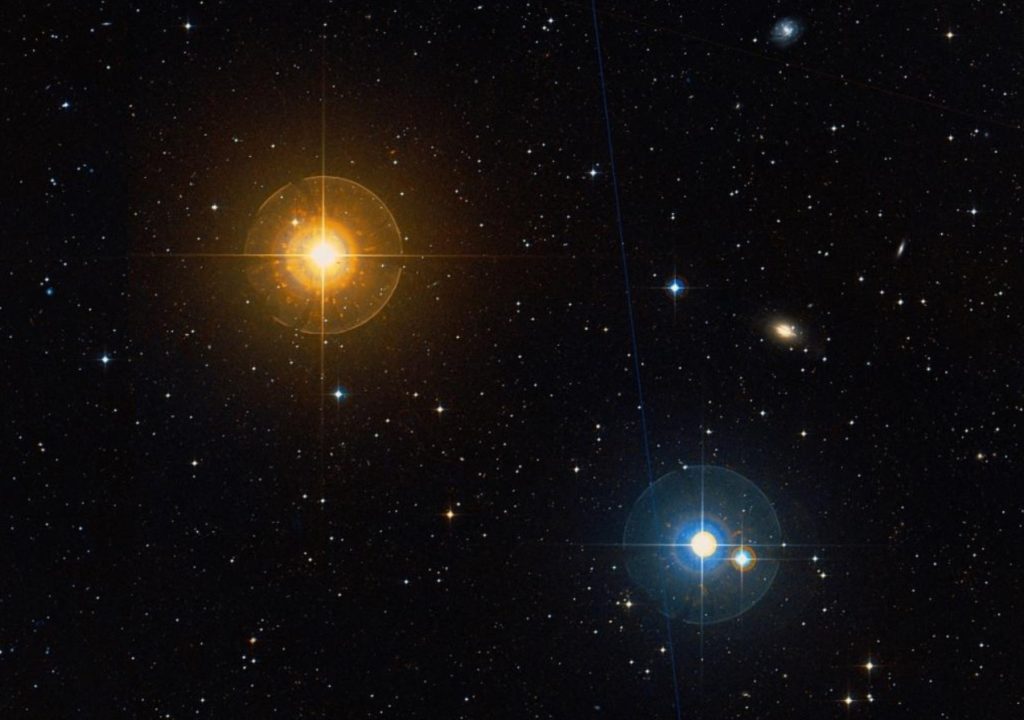 Baten Kaitos can be used to find several relatively bright galaxies that lie in the vicinity of the star. These include the spiral galaxies NGC 701, IC 1738, NGC 681 (the Little Sombrero Galaxy), PGC 6637, and PGC 6667, which form the NGC 681 Group. 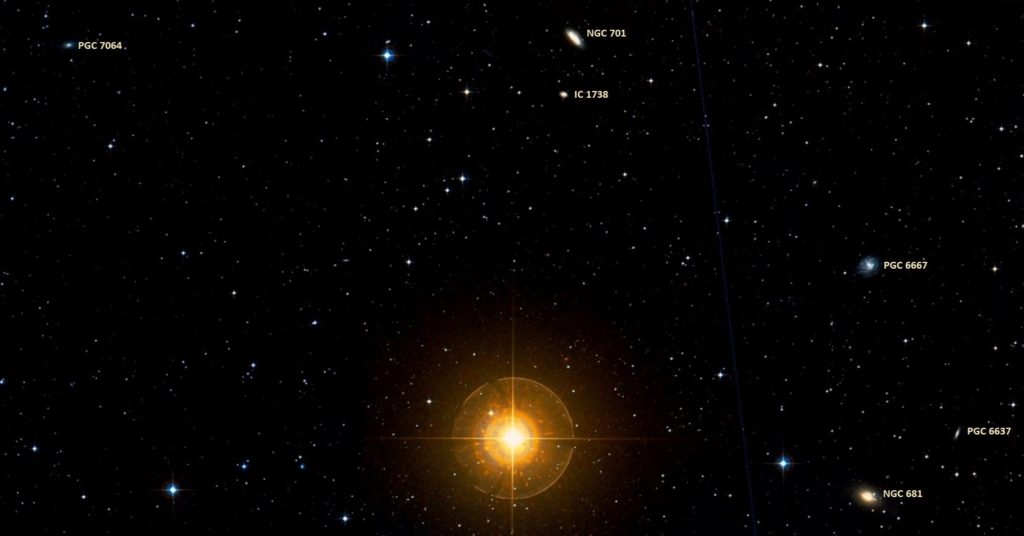 Baten Kaitos is located in the constellation Cetus, the Whale. Cetus is one of the 48 Greek constellations, first listed by the astronomer Ptolemy of Alexandria in the 2nd century CE. Occupying an area of 1,231 square degrees, it is the fourth largest constellation in the sky, after Hydra, Virgo, and Ursa Major. Even though it is large, Cetus is not particularly conspicuous, with only two stars brighter than magnitude 3.00: the constellation’s luminary Diphda (Beta Ceti) and the slightly fainter Menkar (Alpha Ceti). Cetus is known for its variable stars Mira (Omicron Ceti), a pulsating red giant, and UV Ceti, a flare star and one of the nearest star systems to the Sun, as well as for Tau Ceti, one of the nearest solar twins (G-type main sequence stars) to Earth, which hosts five candidate planets. The constellation is also home to the most distant star discovered as of March 2022. Earendel (WHL0137-LS) has a comoving distance of 28 billion light-years.