Almach, Gamma Andromedae (γ And), is a quadruple star system located in the constellation Andromeda. With an apparent magnitude of 2.27, it is the third brightest point of light in Andromeda. It is only slightly fainter than Mirach and Alpheratz, the constellation’s brightest stars. Almach lies at an approximate distance of 350 light years from Earth. It is a popular target for stargazers because the main components form a striking contrasting pair, like Izar in Boötes and Albireo in Cygnus. The brighter component appears orange or yellow, while the dimmer one is bluish white. The primary component, formally named Almach (Gamma1 Andromedae), has the stellar classification K3IIb, indicating a bright giant star appearing orange in colour. The star has a radius 80 times that of the Sun. With a surface temperature of 4,500 K, it is 2,000 times more luminous than the Sun. It has a projected rotational velocity of up to 17 km/s. The spectroscopic binary system, Gamma Andromedae B, consists of two blue-white main sequence stars of the spectral type B9.5V. The system is closer to us than Gamma Andromedae A, lying at a distance of about 260 light years.

The multiple nature of Gamma Andromedae was discovered by the German physicist and astronomer Johann Tobias Mayer in 1778. Mayer reported the star to be a double.

Gamma2 Andromedae was discovered to be a double by the German-Russian astronomer Wilhelm Struve in October 1842. Struve noted that the two components were separated by less than an arcsecond.

Spectrograms taken from October 1957 to February 1959 revealed that Gamma Andromedae B was itself a spectroscopic binary consisting of components of the spectral type B9.5V that orbit each other with a period of 2.67 days.

In Babylonian astronomy, Almach and the stars of Triangulum formed a constellation called MULAPIN (), “the Plough.” This was the first constellation presented on a pair of tablets known as the MUL.APIN. This was a Babylonian astronomical compendium that listed 66 stars and constellations, with notes on rising, setting, and culmination dates. The Babylonian compendium was named for its incipit (the opening words of the text), which corresponded to the first constellation of the year. In Mesopotamia, the Plough constellation’s heliacal rising (appearance in the sky before the dawn after a period of invisibility) in February marked the beginning of spring ploughing. The earliest copy of the MUL.APIN dates back to 686 BCE, but the text is believed to have been compiled around 1000 BCE.

Like many other bright stars, Almach has been used or mentioned in numerous works of fiction. The most memorable uses include the novels Uranie (1889) by Camille Flammarion, Isaac Asimov’s Foundation (1951), and Jack Vance’s The Five Gold Bands (1953).

The name was officially approved by the International Astronomical Union’s (IAU) Working Group on Star Names (WGSN) on July 20, 2016. It formally applies only to the component Gamma Andromedae A (Gamma1 Andromedae).

In medieval Arabic astronomy, Almach was also known as Rijl al Musalsalah, meaning “the foot of the chained woman.” The name refers to the star’s position in the constellation Andromeda, marking Andromeda’s foot.

Almach is relatively easy to find because it is part of a chain of three bright stars between the Great Square of Pegasus and the constellation Perseus. The chain is formed by Alpheratz, the upper left star of the Great Square, Mirach, a reddish star of equal brightness, and Almach, which lies near the border with Perseus. Almach lies roughly along the imaginary line extended from Caph through Schedar, the stars on the right side of Cassiopeia’s W. 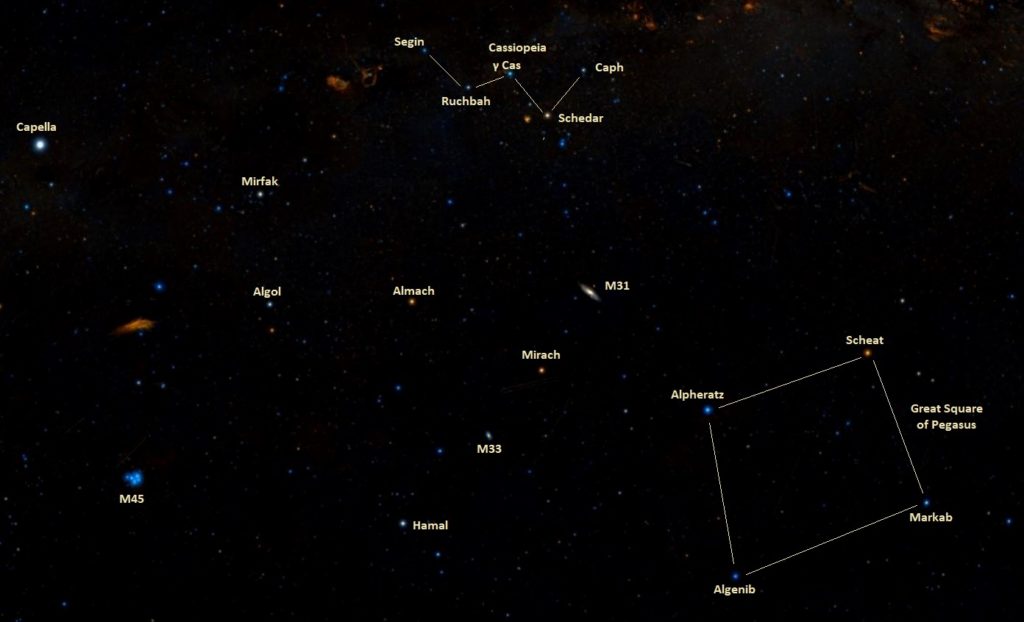 The chain of three bright stars is commonly used to find Mirfak, the brightest star in Perseus, and the famous variable star Algol. Mirfak, the central star of the Alpha Persei Cluster, is found by extending the line from Mirach to Almach in the direction of Perseus, and Algol forms a triangle with Mirfak and Almach.

The bright, large open cluster NGC 752 can be found about 5 degrees south and a little west of Almach. It has an apparent magnitude of 5.7 and lies 1,300 light years away. The constellation is best-known for being home to the Milky Way’s largest neighbour, the Andromeda Galaxy (Messier 31), and its two smaller satellites, Messier 32 and Messier 110. It also contains the magnitude 10.8 spiral galaxy NGC 891 (the Silver Sliver Galaxy), the planetary nebula catalogued as NGC 7662 and also known as the Blue Snowball Nebula, and the bright open star clusters NGC 752 and NGC 7686.

The best time of year to observe the stars and deep sky objects in Andromeda is during the month of November, when the constellation rises high in the evening sky.