Alphard, Alpha Hydrae (α Hya) is an orange giant or bright giant star located in the constellation Hydra. With an apparent magnitude of 2.00, it is the brightest star in the constellation and marks the heart of the celestial Water Snake. It lies at a distance of 177 light years from Earth.

Alphard has the stellar classification K3 II-III, indicating a giant (III) or bright giant (II) appearing orange in colour. The star has a mass 3.03 times that of the Sun and has expanded to a size of 50.5 solar radii. With an effective temperature of 4,120 K, it is about 780 times more luminous than the Sun. It has a projected rotational velocity of 1.1 km/s and completes a rotation every 2,991 days. The star’s estimated age is about 420 million years.

Alphard is a mild barium star. An excess of barium in a star’s spectrum typically indicates mass transfer from a white dwarf companion. White dwarfs are dense remnants of stars that expelled their outer layers when they reached the end of their life cycle. In a binary system, some of the expelled gas would fall onto the companion and pollute its surface layers. Since astronomers have not detected a white dwarf companion near Alphard, it is believed that the companion has since faded and can no longer be seen. The same fate awaits Alphard. The star is not massive enough to go out as a supernova. Instead, when it reaches the end of its life, it will cast off its outer layers to form a planetary nebula and gradually fade as a white dwarf.

In 2006, a study using precise radial velocity measurements found variations in the radial velocities and spectral line profiles of Alphard and another class K giant, Epsilon Leporis. The oscillations had periods from several hours to a few days and are believed to be a result of stellar pulsations. The study also found a correlation between the oscillation in the asymmetry of Alphard’s spectral line profile and the star’s radial velocity. The discovery of the multi-periodic oscillations and non-radial oscillation modes was in line with earlier detections of solar-like and Mira-like oscillations in red giants and makes these stars interesting targets for asteroseismologic studies.

Alphard is one of the 58 bright stars selected for navigation. It is the only navigational star in Hydra. Navigational stars are some of the brightest and most recognizable stars in the sky. They span the celestial sphere from the declination -70° to +89° and have a special status in the field of celestial navigation because they are very easy to identify.

Even though it appears considerably fainter than fellow class K giants Arcturus, Pollux and Aldebaran, Alphard is in fact more intrinsically luminous. It only appears fainter because it lies at a much greater distance. It is located 177 light years away and shines with 780 solar luminosities, while the other stars are closer to us, Arcturus (170 L☉) at 36.7 light years, Pollux (32.7 L☉) at 33.78 light years, and Aldebaran (439 L☉) at 65.3 light years.

Alphard is one of the stars featured on the flag of Brazil. Each star represents a Brazilian Federative Unit and Alphard symbolizes the state of Mato Grosso do Sul.

In ancient China, Alphard was part of an asterism known as the “red bird.”

The Toyota Alphard, a minivan produced by Toyota, was named after the star.

The name Alphard (pronunciation: /ˈælfɑːrd/) is derived from the Arabic al-fard, meaning “the solitary one.” The name refers to the star’s position in the area of the sky that does not contain any other exceptionally bright stars.

In Arabic astronomy, Alphard was called the “backbone of the Serpent.” The 17th century Egyptian astronomer Al Achsasi Al Mouakket called it Soheil al Fard in his Calendarium and the phrase was later translated into Latin as Soheil Solitarius or “the bright solitary one.”

Danish astronomer Tycho Brahe (1546 – 1601) called Alphard Cor Hydræ, which is Latin for “the heart of Hydra.”

The Chinese know Alpha Hydrae as 星宿一 (Xīng Xiù yī), meaning “the First Star of Star.” The Chinese Star asterism is also formed by Tau1 Hydrae, Tau2 Hydrae, Ukdah (Iota Hydrae), 27 Hydrae, 26 Hydrae, HD 82428, and HD 82477. The Star mansion is one of the seven mansions of the Vermilion Bird.

Alphard is located in an area of the sky that does not contain many bright stars or asterisms that would make the star easily identifiable. For northern observers, it lies southwest of Regulus in Leo, appearing to the lower left of Sirius, the brightest star in the sky. It forms a triangle with Regulus and Procyon.

Alphard can be used to find the spiral galaxies NGC 2855 and PGC 25886, which lie in the vicinity of the star. 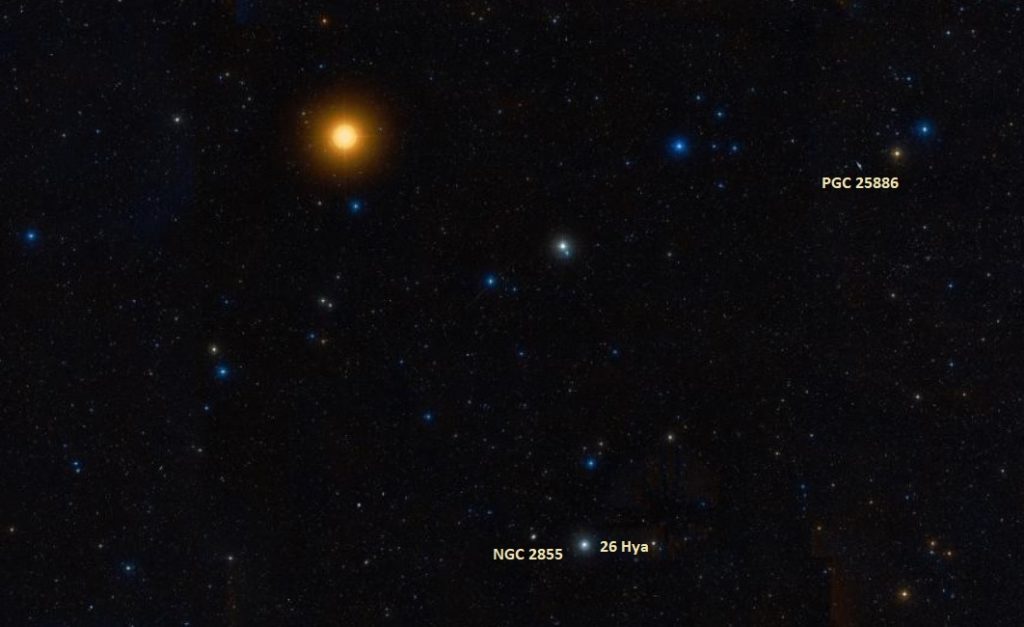 Alphard is located in the constellation Hydra. Hydra is the largest of all 88 constellations, occupying 1,303 square degrees of the southern sky. Representing the many headed monster associated with the story of Heracles in Greek mythology, Hydra is one of the 48 Greek constellations, first listed by the Greco-Roman astronomer Ptolemy in the 2nd century CE. In spite of its size, it is not particular prominent, with only two stars – Alphard and the yellow giant Gamma Hydrae – brighter than magnitude 3. Hydra contains several interesting deep sky objects. These include three Messier objects – the Southern Pinwheel Galaxy (Messsier 83), the globular cluster Messier 68, and the open cluster Messier 48 – as well as the globular cluster NGC 5694, the superimposed pair of galaxies catalogued as NGC 3314, the lenticular galaxy NGC 4993, the irregular galaxy NGC 2936, nicknamed the Porpoise Galaxy, the Hydra Cluster of galaxies, and the planetary nebulae Abell 33 and NGC 3242, also known as the Ghost of Jupiter.

The best time of year to observe the stars and deep sky objects of Hydra is during the month of April.