Mesarthim, Gamma Arietis (γ Ari), is a binary star system located in the constellation Aries. With a combined apparent magnitude of 3.86, it is the fourth brightest star in Aries, after Hamal, Sheratan and Bharani. Mesarthim lies at a distance of 164 light years from Earth. Together with Sheratan, it marks one of the Ram’s horns.

The Gamma Arietis system appears as a single star to the unaided eye, but really consists of two stars that can be resolved in small telescopes. The stars are designated Gamma1 Arietis and Gamma2 Arietis, or Gamma Arietis B and Gamma Arietis A. They are separated by 7.606 arcseconds and orbit each other with a period of more than 5,000 years.

The primary component, Gamma2 Arietis (Gamma Arietis A), is the slightly brighter of the two, with an apparent magnitude of 4.75. It is a white star of the spectral type A1p Si that has also been classified as a subgiant of the spectral type B9.5IV by some sources, indicating that it may be starting to evolve away from the main sequence.

Mesarthim is classified as a Lambda Boötis star, a chemically peculiar star with a low surface abundance of iron peak elements. It is also classified as an Alpha2 Canum Venaticorum variable, a chemically peculiar star still on the main sequence, belonging to the spectral class B8p to A7p, with a strong magnetic field and an overabundance of certain elements. Mesarthim has particularly strong lines of silicon. The star’s magnetic field is about a thousand times stronger that the Earth’s, and the magnetism produces enormous starspots which cause variations in brightness as the star rotates. Mesarthim shows brightness variations of 0.04 magnitudes over a period of 2.61 days. The star is a very fast spinner, with a projected rotational velocity of 201 km/s. Its estimated temperature is 10,970 K.

The companion, Gamma1 Arietis (Gamma Arietis B), is a main sequence star with the stellar classification B9 V. It has a visual magnitude of 4.83 and a radius 1.9 times that of the Sun. It is the hotter of the pair, with a temperature of about 11,000 K.

Several thousand years ago, Mesarthim was the nearest visible star to the vernal equinox, the point where the Sun’s apparent path across the sky crosses the celestial equator from south to north, marking the beginning of spring in the northern hemisphere. The star was known as “the First Star in Aries” and the equinox as “the First Point of Aries.” The vernal equinox was located between Mesarthim and the constellation Pisces in 130 BC, when the Greek astronomer Hipparchus defined the point. It was in Aries between 2000 and 100 BCE and has since moved to Pisces due to the Earth’s axial precession. 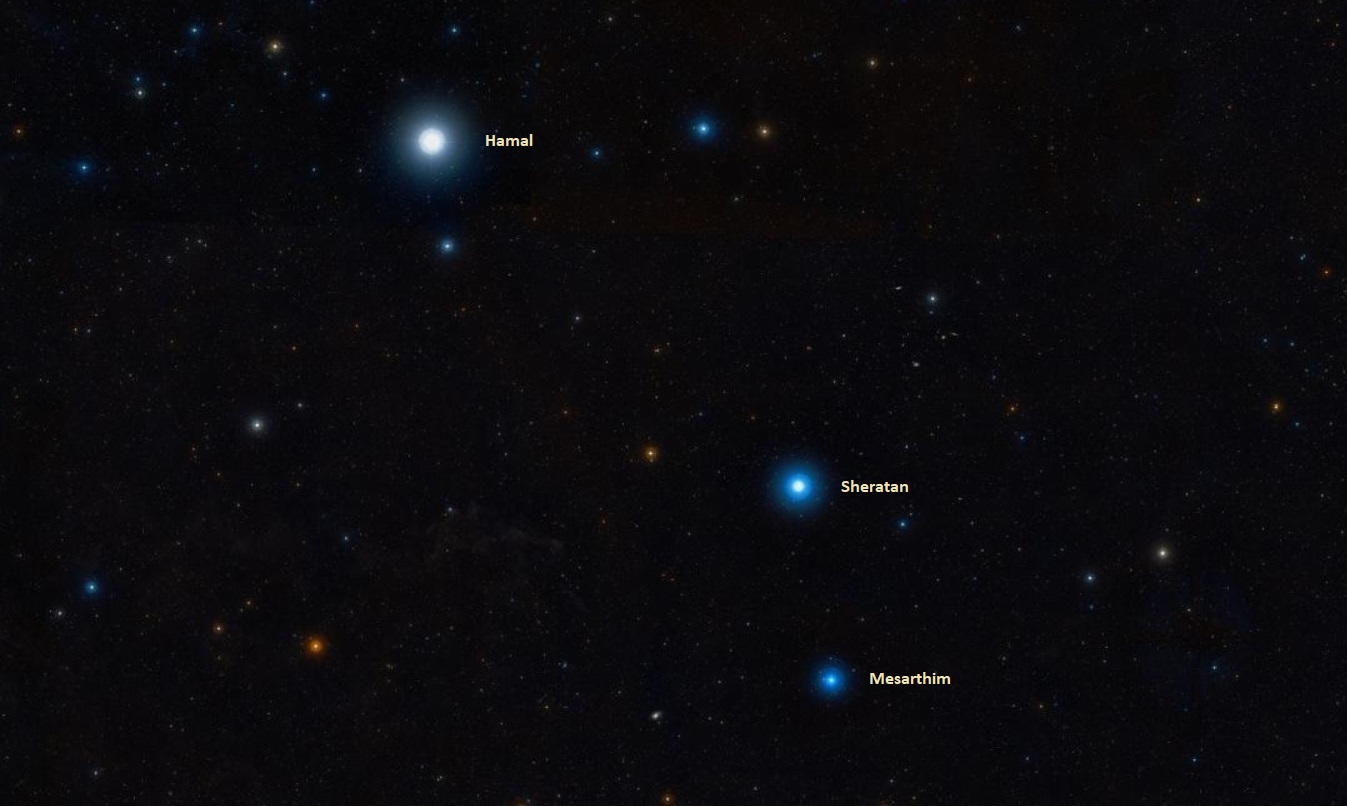 The English natural philosopher Robert Hooke was the first to discover the binary nature of Gamma Arietis. He resolved the two components in 1664 while searching for a comet. Gamma Arietis was one of the first observed binary stars.

The name Mesarthim (pronunciation: /mɛˈsɑːrθɪm/) is associated with the Hebrew mᵉshārᵉthīm, meaning “servants,” but in fact has the same origin as Sheratan. Gamma Arietis originally shared the name Sheratan with the brighter Beta Arietis. Sheratan is derived from the Arabic aš-šaraţān, meaning “the two signs.” It is a reference to the stars once having marked the northern vernal equinox. However, the name got corrupted to Sartai in medieval texts and the German uranographer Johann Bayer mistook this for the Hebrew word for “servants.” The name was nevertheless picked up by later scholars, while Beta Arietis kept the name Sheratan.

The name Mesarthim was approved by the International Astronomical Union’s (IAU) Working Group on Star Names (WGSN) on August 21, 2016. It formally applies only to the component Gamma2 Arietis or Gamma Arietis A.

The Chinese know the star as 婁宿二 (Lóusù Èr), the Second Star of Bond. Formed by Mesarthim, Sheratan and Hamal, the Chinese Bond asterism is one of the seven mansions of the White Tiger and marks the Tiger’s body.

In Hindu astronomy, Mesarthim and Sheratan are associated with Ashvins, the twin Vedic deities of medicine.

Mesarthim is not particularly bright at magnitude 3.86, but can be identified on a clear, dark night as part of a flat triangle pattern that makes the constellation Aries recognizable. The triangle asterism Mesarthim forms with the brighter Hamal and Sheratan is located in the region of the sky between the bright Pleiades cluster (Messier 45) in Taurus and the Great Square of Pegasus, formed by Alpheratz, the brightest star in Andromeda constellation, and Pegasus stars Algenib, Scheat and Markab. 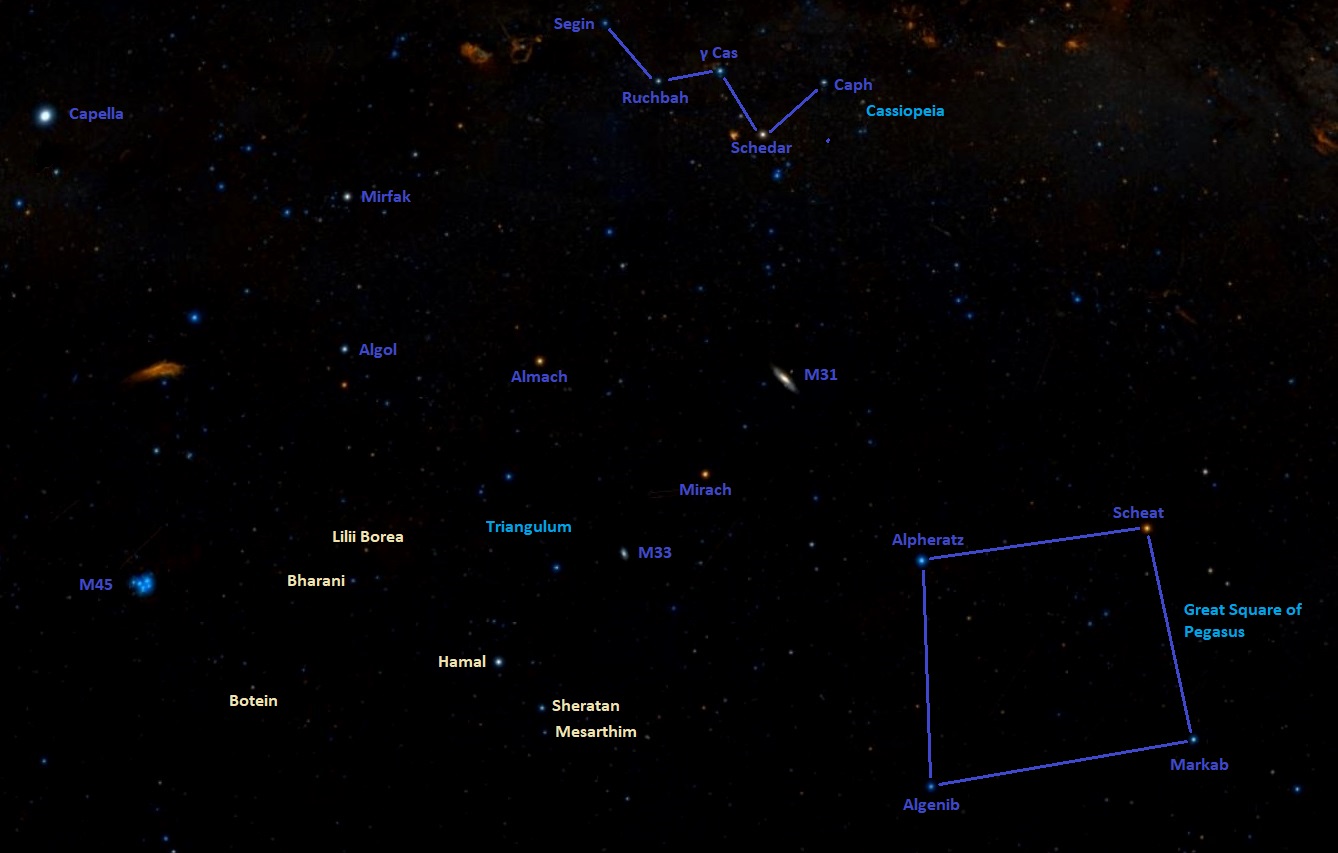 The Aries stars are located just under the elongated triangle of Triangulum constellation which, in turn, can be found under the chain of three bright stars of Andromeda constellation – Alpheratz, Mirach and Almach – that lie between the Great Square of Pegasus and the constellation Perseus.

Mesarthim can be used to find NGC 772, a bright unbarred spiral galaxy twice the size of the Milky Way, located about 130 million light years away. The galaxy lies just to the east of the star.

Mesarthim is located in the constellation Aries. Representing the Ram, the constellation stretches across 441 square degrees of the northern sky near the more conspicuous Taurus and Perseus. Like other zodiac constellations, it was first listed by the astronomer Ptolemy of Alexandria in the 2nd century CE. Aries is a relatively inconspicuous constellation, with its brightest star, Hamal, shining at magnitude 2.00. However, it does contain several notable deep sky objects. These include the spiral galaxy NGC 772, the NGC 691 Group of galaxies near Sheratan, the colliding pair of galaxies catalogued as NGC 935 and IC 1801, the elliptical galaxies NGC 770 and NGC 821, and the dwarf irregular galaxy NGC 1156.