Castor, Alpha Geminorum (α Gem), is a sextuple star system located in the constellation Gemini. It is composed of three binary pairs designated Castor A, Castor B and Castor C. The Castor sextet has a combined apparent magnitude of 1.58 and is listed as the 23rd brightest star in the sky. It is slightly fainter than Regulus in Leo and Adhara in Canis Major, and it just outshines Shaula in Scorpius, Gacrux in Crux and Bellatrix in Orion.  Even though it has the designation Alpha, Castor is the second brightest star in Gemini, slightly fainter than its twin Pollux, Beta Geminorum. Castor lies at an approximate distance of 51 light years from Earth.

The Castor system consists of three double stars, with individual components designated as Alpha Geminorum (or Castor) Aa, Ab, Ba, Bb, Ca and Cb. All three visual components – Castor A, Castor B and Castor C – are spectroscopic binaries, pairs of stars locked in tight orbits. They appear as single stars and can only be identified as binary systems through their spectral lines. Unlike the three visual components, the six individual stars cannot be resolved in a telescope. Castor Aa and Castor Ba are both class A main sequence stars locked in orbits with considerably dimmer red dwarf companions, with orbital periods of only a few days. The stars have projected rotational velocities of 18 km/s (Castor Aa) and 33 km/s (Castor Ba). The separation between Castor A and Castor B is about 6 arcseconds. 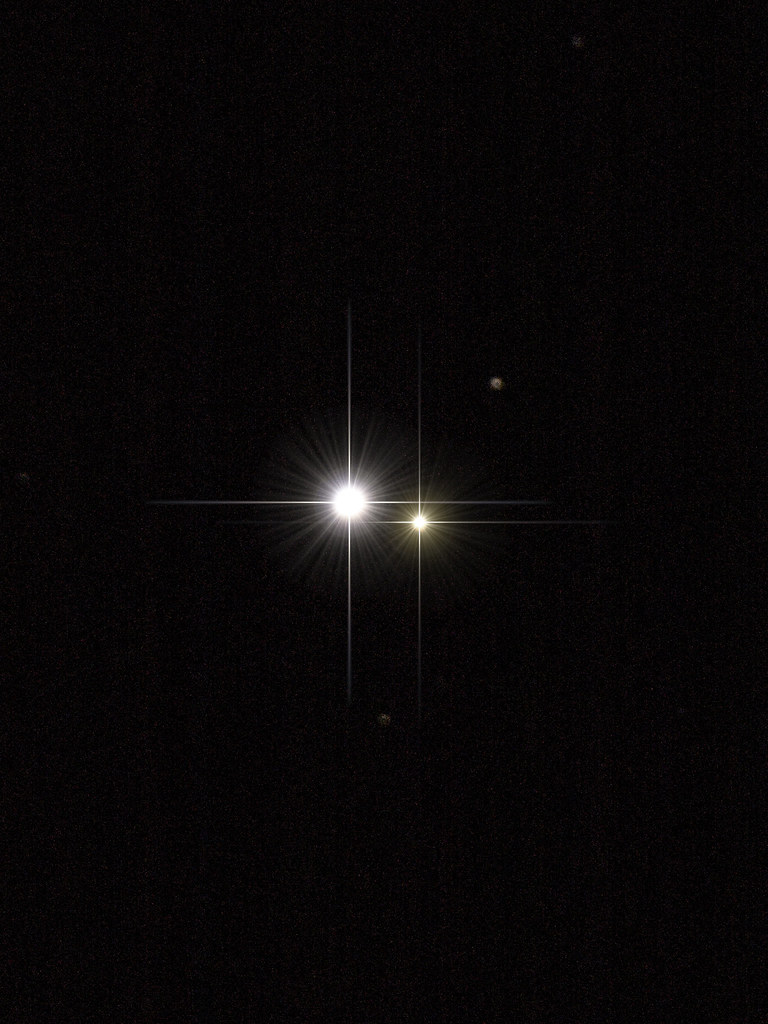 Castor C is an eclipsing binary star system composed of two red dwarfs with an orbital period of less than a day. Both components have a projected rotational velocity of 37 km/s. Castor C is also classified as a BY Draconis variable and has the variable star designation YY Geminorum. Eclipsing binary stars show variations in brightness because the stars eclipse each other during their orbit, while BY Draconis stars exhibit fluctuations of up to 0.5 magnitudes due to the presence of star spots and the effect of rotation. The Castor C components have areas of different brightness and show irregular flares, both factors contributing to the system’s variability.

Castor C completes an orbit around the Castor AB pair every several thousand years. It is separated from the AB component by 73 seconds of arc.

Castor A is composed of a white main sequence star of the spectral type A1V and a red dwarf companion with the stellar classification dM1e. They have a combined visual magnitude of 1.93.

Castor Aa has 2.76 solar masses and a radius 2.4 times that of the Sun. Its estimated surface temperature is 10,286 K. The star is sometimes given the spectral type of a subgiant, A1.5IV, indicating that its hydrogen fusing days are coming to an end.

The mass and other properties of the companion are hard to determine, but the star is believed to have less than 50% of the Sun’s mass.

Like Castor A, Castor B consists of a white main sequence star and a red dwarf. The binary star system has a combined apparent magnitude of 2.97, which makes it a full magnitude fainter than Castor A. The average separation between Castor A and Castor B is 100 astronomical units.

Castor Ba, the brighter, larger and more massive component in the system, has 2.98 solar masses and a radius 3.3 times solar. It is slightly cooler than Castor Aa, with a temperature of 8,842 K.

Castor Ba is classified as an Am star (metallic-line star), a chemically peculiar class A star with strong metal absorption lines in its spectrum.

The properties of the red dwarf are uncertain but, like Castor Ab, it is believed to have less than 0.5 solar masses.

Castor C is the faintest of the three visual components. With a visual magnitude of 9.83, it is the only component invisible to the unaided eye. It can, however, be seen in a small telescope. Separated from Castor AB by at least 1,000 astronomical units, Castor C consists of two red dwarf stars believed to have identical properties. Both are classified as dM1e dwarfs with 0.5992 solar masses and 0.6191 solar radii. Both stars have surface temperatures of 3,820 K and less than 10% of the Sun’s luminosity. Their estimated age is 370 million years.

Castor C is an eclipsing binary system, exhibiting variations in brightness as a result of the two components periodically eclipsing each other as they orbit. The system shows additional variations as a result of irregular flares and also due to the presence of areas of different brightness on the surface that shift in and out of sight as the star rotates.

The star system is classified as a BY Draconis-type variable. These stars are cool main sequence dwarfs of late spectral types (K or M) with star spots or other chromospheric irregularities that cause variations in brightness of up to 0.5 magnitudes as the stars rotate. A number of nearby stars – Barnard’s Star, Kapteyn’s Star, Lalande 21185, 61 Cygni, Ross 248 and possibly Procyon – are also included in this class.

In 1970, Castor A and Castor B were separated by less than 2 arcseconds. The separation between the stars increased to about 6 arcseconds by 2017 and will continue to grow to a maximum of 6.5 arcseconds around the year 2100.

The English astronomer James Pound was the first to note Castor as a double star, in 1718. However, it is possible that Italian-French astronomer and engineer Giovanni Cassini had resolved at least two visual components as early as 1678.

All three visual components of the Castor system are known to exhibit flares. Observations with NASA’s Chandra X-ray Observatory and the European Space Agency’s (ESA) X-ray Multi-Mirror Mission (XMM-Newton) space observatory revealed that both Castor A and Castor B exhibit flares. A study published in 2003 provided an analysis of both binaries’ isolated X-ray spectra and light curves, concluding that the X-ray flares detected on the stars were similar to those of dMe flare stars, which indicates that the companions (Castor Ab and Castor Bb) are responsible for the X-ray emission.

Castor was once believed to be a member of the Castor Moving Group, a group of stars that share a common origin and similar velocities. The group’s other members included Vega, Fomalhaut, Alderamin and Zubenelgenubi. The existence of the group was originally proposed by J. P. Anosova, and V. V. Orlov in 1990, who included Castor and Fomalhaut in the group. In a study published in 1999, Barrado y Navascues estimated an age of 200 ± 100 million years for the group and presented a list of 16 members, including Vega, Fomalhaut, Alderamin and Zubenelgenubi.

However, in a paper published in 2013, a team led by Eric E. Mamajek argued that the stars, or at least the well-known members, including Castor, did not share a common origin because the velocity differences between them were too large and the stars were even more separated 10 million years ago than they are now.

Castor is the star’s traditional name, long predating the Bayer designation Alpha Geminorum.  It is taken from Castor, one of the Dioscuri (Twins) in Greek and Roman mythology. Castor and its brighter neighbour Pollux mark the heads of the celestial Twins, giving the constellation Gemini its name.

The name formally applies only to Alpha Geminorum Aa, but is informally used for the entire system, as well as its individual components. It was officially approved by the International Astronomical Union’s (IAU) Working Group on Star Names (WGSN) on June 30, 2016.

In Arabic astronomy, Castor was known as Al-Ras al-Taum al-Muqadim, or “the head of the foremost twin.” Its earlier Arabic name was Al Awwal al Dhira’ (or Aoul al Dzira), meaning “the first paw” or “the first forearm,” referring to an enormous lion.  This name was translated into Latin as Prima Brachii, “the first in the paw.”

In India, Castor and Pollux were known as Acvini, the twin horsemen of the dawn.

The Babylonians knew the star as the Western One of the Twins. Castor and Pollux constituted the Great Twins, or Mas-tab-ba-gal-gal.

The stars Castor and Pollux are very different – Castor is a sextuple system, while Pollux is a single star, an orange giant – but they are linked by their proximity in the sky (they are about 18 light years apart) and by the myth of their Greek/Roman namesakes. 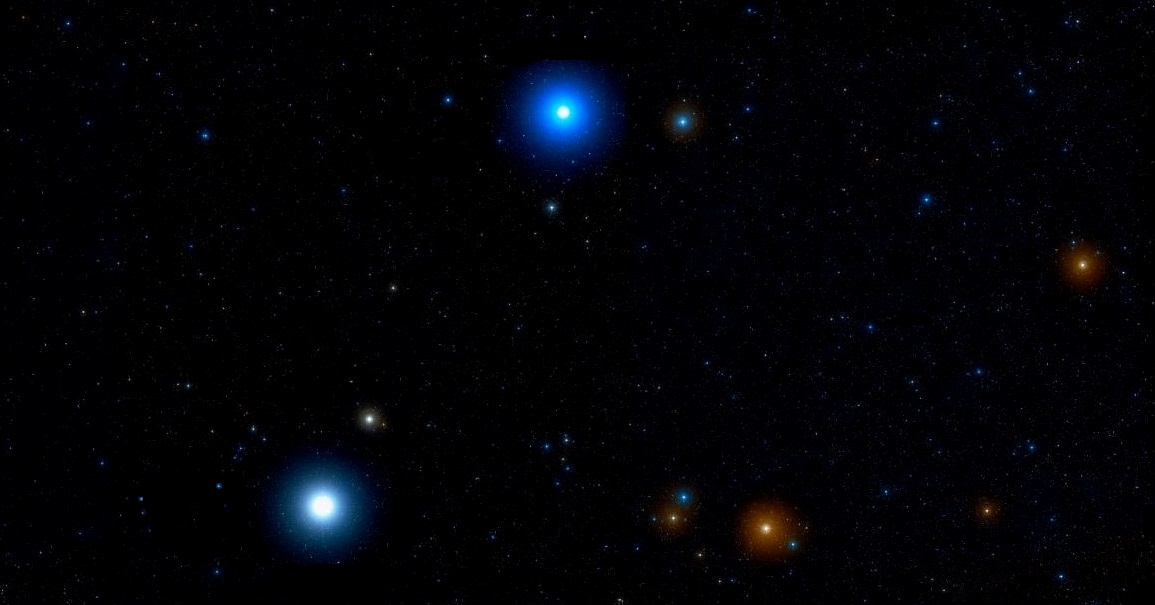 In Greek mythology, Castor and Polydeuces (Pollux in Latin) were twin brothers born to different fathers. They are also known as the Dioscuri, Tyndarids, Tyndaridae, Castores and Gemini. The twins were the sons of the Spartan Queen Leda and brothers of Helen of Troy and Clytemnestra, wife of Agamemnon. Castor was the mortal son of Leda’s husband, King Tyndareus of Sparta, and Pollux was the immortal son of Zeus, who had seduced Leda in the form of a swan.

Castor and Pollux were inseparable growing up and both became excellent horsemen and hunters. They took part in the Calydonian Boar hunt alongside Atalanta, Theseus, Laertes, Peleus, Telamon, Jason, and many other heroes, and later joined Jason and the Argonauts on the quest for the Golden Fleece.

When Castor met his end in a feud with the twins’ cousins and fellow Argonauts Idas and Lynceus, Pollux asked Zeus not to separate them. Zeus offered him the choice to either spend all his time on Mount Olympus or share his immortality with Castor so that they can both spend half their time on Olympus and the other half in the underworld (Hades). Pollux chose the latter and Zeus granted the twins an alternate immortality, allowing them to stay together. Zeus also turned the twins into the constellation Gemini.

Castor is easy to find because it is bright and located near a prominent winter asterism known as the Winter Circle or Winter Hexagon, formed by Pollux, Capella, Aldebaran, Rigel, Sirius and Procyon. The asterism dominates the evening sky in northern latitudes throughout the winter months and makes it easy to identify the individual stars and their neighbours. Being close to Pollux, Castor can be found using the asterism. Another way to find Castor and Pollux is to drawn an imaginary line from Rigel at Orion’s foot through Betelgeuse at the shoulder and follow the line to two stars that appear similar in brightness and lie relatively close to each other. Castor is the northern star, closer to Capella (the brightest star in a hexagonal asterism that dominates the constellation Auriga), while Pollux lies to the south, in the direction of Procyon and Sirius. (Sirius is easier to identify because it is the brightest star in the sky and the stars of Orion’s Belt point directly at it.)

The best time of year to observe Castor, Pollux, and other Gemini stars is in February. In mid-northern latitudes, the constellation is relatively prominent in the sky from January to April.

Castor is located in the Greek constellation Gemini. Known since ancient times, the constellation takes its name from the myth of Castor and Pollux. It is associated with the Geminids, one of the richest annual meteor showers, peaking in mid-December every year.