Rasalhague, Alpha Ophiuchi (α Oph), is a binary star system located in the constellation Ophiuchus. It marks the head of the celestial Serpent Bearer. With an apparent magnitude of 2.07, it is the brightest point of light in the constellation. It lies at a distance of 48.6 light years from Earth.

The Alpha Ophiuchi system consists of Alpha Ophiuchi A, a white subgiant star of the spectral type A5 IV, and Alpha Ophiuchi B, an orange main sequence star with the stellar classification K5-7 V. The stars orbit each other with a period of 3,148.4 days (8.62 years). They reached the closest approach in April 2012, when they were separated by only 50 milliarcseconds.

The primary component, formally named Rasalhague, has a mass about 2.4 times that of the Sun and a radius 2.6 times solar. With an effective temperature between 7,880 and 8,050 K, it shines with 25.1 to 25.6 solar luminosities. The star’s estimated age is 770 million years. Some sources give the spectral class A5 III for Rasalhague, indicating a giant instead of subgiant star.

The companion, Alpha Ophiuchi B, is less evolved and less massive. It has about 0.85 solar masses. With a spectral class in the range from K5V to K7V, it is still a main sequence star fusing hydrogen in its core.

Rasalhague is an exceptionally fast spinner. With a projected rotational velocity of 240 km/s, it spins at 88.5% of its breakup velocity. As a result, the star’s shape has been distorted into an oblate spheroid and its equatorial radius is about 20% larger than its radius at the poles. The radius at the equator is 2.858 solar radii and the polar radius is 2.388 solar radii.

Rasalhague is one of the 58 bright stars that have a special status in the field of celestial navigation. It is one of two navigational stars in Ophiuchus. The other one is the fainter Sabik, Eta Ophiuchi. The two stars belong to a group of 13 equatorial navigational stars of the western hemisphere. The group also includes Antares in the constellation Scorpius, Gienah in Corvus, Nunki in Sagittarius, Alpheratz in Andromeda, Enif and Markab in Pegasus, Altair in Aquila, Alphecca in Corona Borealis, Spica in Virgo, Zubenelgenubi in Libra, and Arcturus in Boötes.

The name Rasalhague (pronunciation: /ˈræsəlheɪɡ/) is derived from the Arabic raʼs al-ḥawwāʼ, meaning “the head of the serpent collector.” It refers to the star’s position in the constellation Ophiuchus.

The name was approved by the International Astronomical Union’s (IAU) Working Group on Star Names (WGSN) on July 20, 2016. It formally applies only to the component Alpha Ophiuchi A.

In Chinese astronomy, Rasalhague is known as 候 (Hòu), Astrologer. It is the only star in the Chinese Astrologer asterism. The asterism is part of the Heavenly Market Enclosure and represents the official responsible for observing astronomical phenomena. 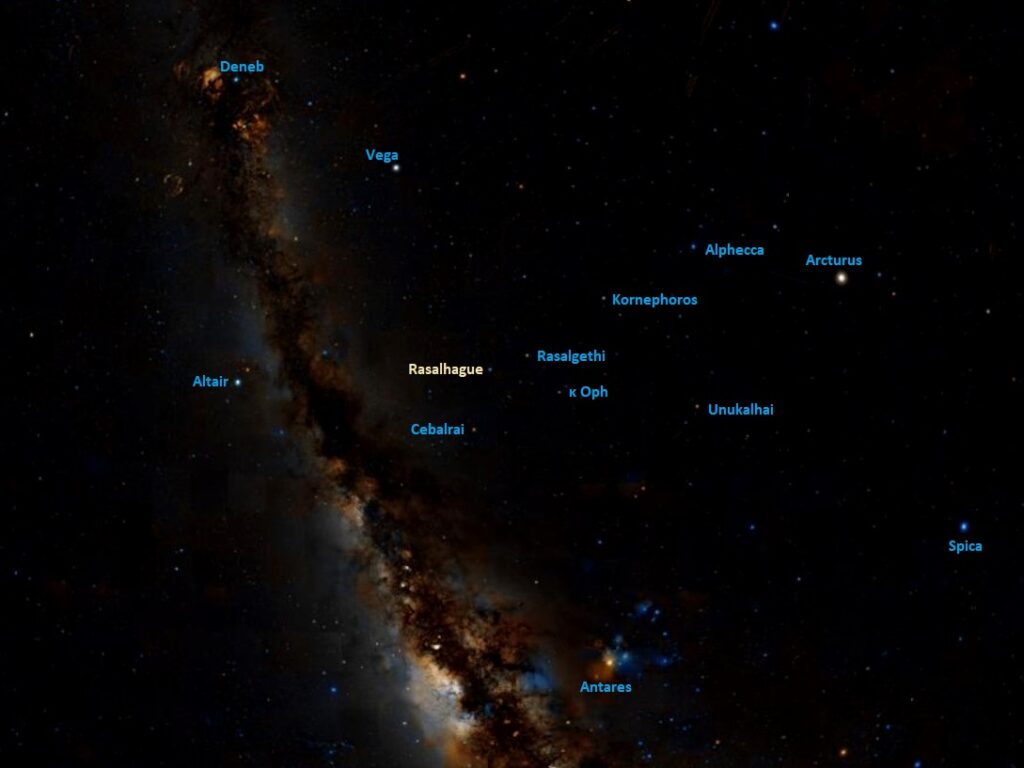 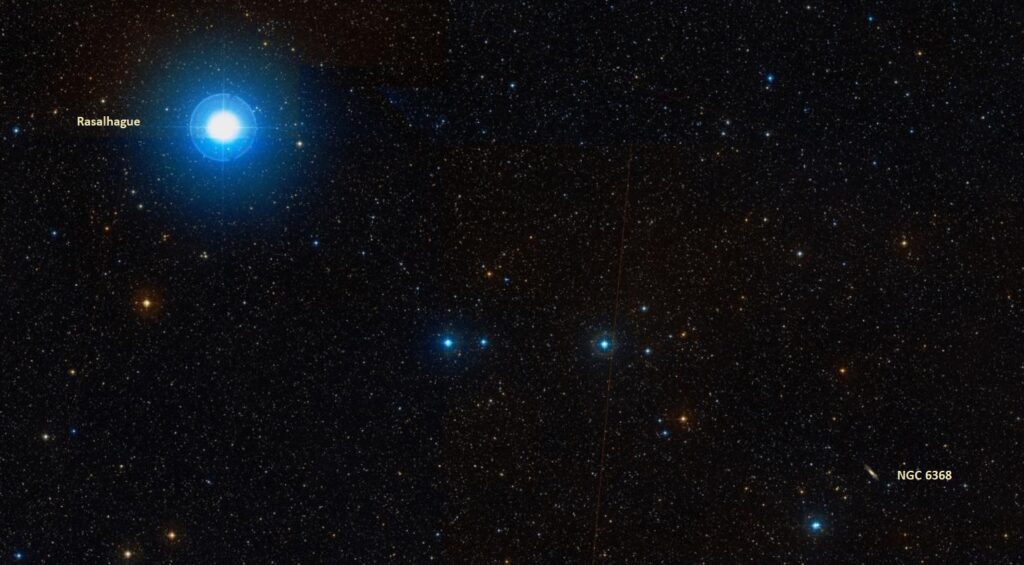 Rasalhague is the luminary of the constellation Ophiuchus, the Serpent Bearer. Also known as Serpentarius, Ophiuchus (pronunciation: /ɒfiˈjuːkəs/) represents the Greek mythical healer Asclepius, who is depicted holding a giant snake represented by the neighbouring constellation Serpens. Ophiuchus is one of the 48 Greek constellations, first listed by the astronomer Claudius Ptolemy of Alexandria in his Almagest in the 2nd century CE. Ophiuchus is the 11th largest constellation in the sky. It stretches across 948 square degrees around the ecliptic, just above Scorpius, and divides Serpens constellation into two parts. It has five stars brighter than magnitude 3.00, but no first-magnitude stars that would make it stand out in this area of the sky.

Ophiuchus contains many notable stars and deep sky objects. The best known of these include Barnard’s Star, the fourth nearest individual star to Earth (after the three stars in the Alpha Centauri system), located only 5.958 light years away, RS Ophiuchi, a recurrent nova system consisting of a white dwarf and a red giant, Kepler’s Supernova (SN 1604), the remnant of a Type Ia supernova observed in 1604, the young, magnitude 4.2 open cluster IC 4665, the ultraluminous infrared galaxy NGC 6240, created by the merger of three smaller galaxies, the bipolar planetary nebula M2-9, also known as Minkowski’s Butterfly or the Twin Jet Nebula, and the Dark Horse Nebula, a large dark nebula near the borders with Sagittarius and Scorpius constellations.

The constellation is visible in its entirety from locations between the latitudes 80° N and 80° S, which means that it can be seen from most inhabited areas on Earth.

The best time of year to observe the stars and deep sky objects in Ophiuchus is during the month of July, when the constellation rises high above the horizon in the evening sky.