Seginus, Gamma Boötis (γ Boo) is a double star located in the constellation Boötes, the Herdsman. With an apparent magnitude of 3.03, it is the fourth brightest star in Boötes, after Arcturus, Izar, and Muphrid. It lies at a distance of 86.3 light years from Earth.

Gamma Boötis is the primary component of a double star system that also consists of the star UCAC2 45176266. The star system is designated WDS J14321+3818 and the two components are referred to as component A and B.

Gamma Boötis has the spectrum of a bluish-white giant star of the spectral type A7 III. It has a radius 3.5 times that of the Sun. With an effective temperature of 7,800 K, it shines with 34 solar luminosities. The star is a fast spinner, with a projected rotational velocity of 140 km/s.

In early Arabic astronomy, Seginus was part of an asterism known as Al Dhi’bah, meaning “female wolves” or hyenas,” together with Nekkar (Beta Boötis), Delta Boötis, and Alkalurops (Mu Boötis).

The name Seginus (pronunciation: /sɪˈdʒaɪnəs/) has an uncertain origin, but may come from Latinisation of an Arabic form of Theguius, the Greek name for Boötes constellation. It has also been spelled Segin and Ceginus.

The name was officially approved by the International Astronomical Union’s (IAU) Working Group on Star Names (WGSN) on August 21, 2016. It formally applies only to the component Gamma Boötis Aa.

Roman author Marcus Manilius (1st century CE) called the star prona Lycaonia, meaning “sloping towards Lycaon.” The name Lycaonia referred to Ursa Major, the Great Bear, which was associated with Callisto, who was turned into a bear by Hera. Callisto was the daughter of the Arcadian King Lycaon and sometimes known as Lycaonia. The constellation Boötes was called Lycaon.

The 20th century Czech astronomer Antonín Bečvář listed Gamma Boötis as Haris. The name comes from the Arabic Al-Haris Al-Sama, meaning “the guard of the north” and refers to the constellation Boötes.

Seginus is relatively easy to identify because it is one of the stars that form the Kite asterism that dominates the Boötes constellation. The star lies in the region of the sky between the handle of the Big Dipper and the brighter Boötes stars Arcturus and Izar. 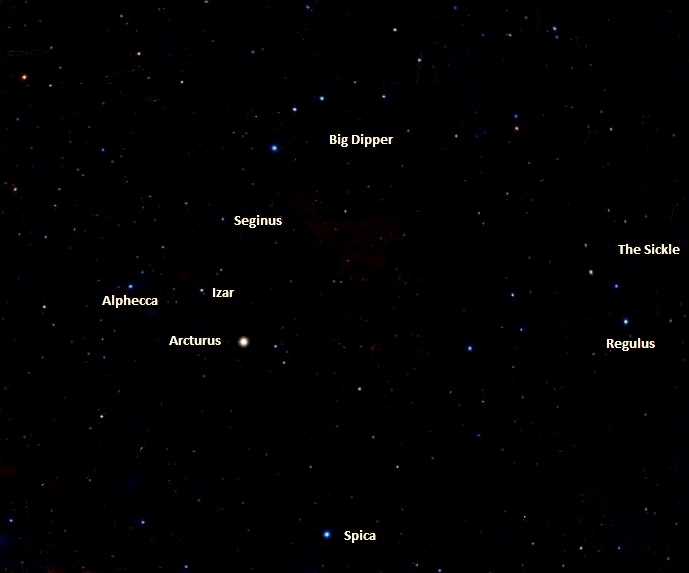 Seginus is located in the constellation Boötes. Representing the celestial Herdsman, Boötes is the 13th largest constellation in the sky. It is one of the Greek constellations, first listed in the Greco-Roman astronomer Ptolemy’s Almagest in the 2nd century CE, but has been known long before Ptolemy’s time. It was first mentioned by its name in Homer’s Odyssey. Seginus marks the Herdsman’s left shoulder.

Boötes contains several stars that are popular targets for stargazers, among others the bright Arcturus (Alpha Boötis), the brightest star in the northern celestial hemisphere, and the multiple stars Izar (Epsilon Boötis) and Alkalurops (Mu Boötis). Notable deep sky objects in the constellation include the lenticular galaxy NGC 5548, the spiral galaxies NGC 5248 and NGC 5676, and the globular cluster NGC 5466.

The best time of year to observe the stars and deep sky objects in the constellation is during the month of June.